In this paper, we study the problem of estimating the covariance matrix under differential privacy, where the underlying covariance matrix is assumed to be sparse and of high dimensions. We propose a new method, called DP-Thresholding, to achieve a non-trivial ℓ_2-norm based error bound, which is significantly better than the existing ones from adding noise directly to the empirical covariance matrix. We also extend the ℓ_2-norm based error bound to a general ℓ_w-norm based one for any 1≤ w≤∞, and show that they share the same upper bound asymptotically. Our approach can be easily extended to local differential privacy. Experiments on the synthetic datasets show consistent results with our theoretical claims. 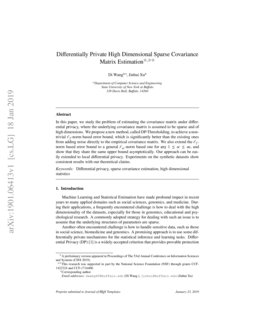 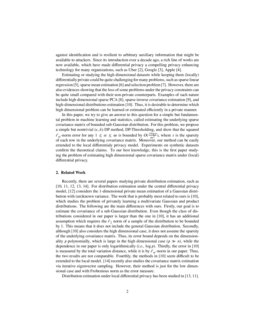 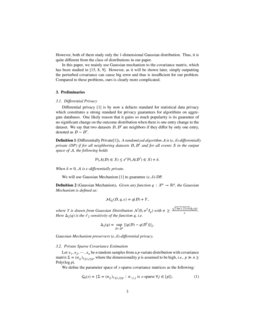 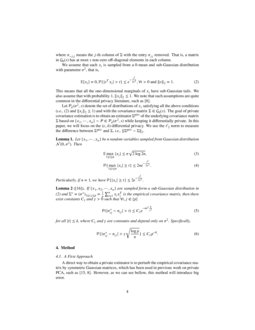 In this paper, we study the problem of precision matrix estimation when ...
Wenqing Su, et al. ∙

In this paper, we present three new error bounds, in terms of the Froben...
Wei Dong, et al. ∙

As one of the most fundamental problems in machine learning, statistics ...
Lijie Hu, et al. ∙

Machine Learning and Statistical Estimation have made profound impact in recent years to many applied domains such as social sciences, genomics, and medicine. During their applications, a frequently encountered challenge is how to deal with the high dimensionality of the datasets, especially for those in genomics, educational and psychological research. A commonly adopted strategy for dealing with such an issue is to assume that the underlying structures of parameters are sparse.

Another often encountered challenge is how to handle sensitive data, such as those in social science, biomedicine and genomics. A promising approach is to use some differentially private mechanisms for the statistical inference and learning tasks. Differential Privacy (DP) dwork2006calibrating is a widely-accepted criterion that provides provable protection against identification and is resilient to arbitrary auxiliary information that might be available to attackers. Since its introduction over a decade ago, a rich line of works are now available, which have made differential privacy a compelling privacy enhancing technology for many organizations, such as Uber uber , Google google , Apple apple .

Estimating or studying the high dimensional datasets while keeping them (locally) differentially private could be quite challenging for many problems, such as sparse linear regression

dwangppml18 , sparse mean estimation duchi2018right and selection problem ullman2018tight . However, there are also evidences showing that the loss of some problems under the privacy constraints can be quite small compared with their non-private counterparts. Examples of such nature include high dimensional sparse PCA ge2018minimax , sparse inverse covariance estimation dwangglobalsip18 , and high-dimensional distributions estimation kamath2018privately . Thus, it is desirable to determine which high dimensional problem can be learned or estimated efficiently in a private manner.

In this paper, we try to give an answer to this question for a simple but fundamental problem in machine learning and statistics, called estimating the underlying sparse covariance matrix of bounded sub-Gaussian distribution. For this problem, we propose a simple but nontrivial

(ϵ,δ)-DP method, DP-Thresholding, and show that the squared ℓw-norm error for any 1≤w≤∞ is bounded by O(slogpnϵ2), where s is the sparsity of each row in the underlying covariance matrix. Moreover, our method can be easily extended to the local differentialy privacy model. Experiments on synthetic datasets confirm the theoretical claims. To our best knowledge, this is the first paper studying the problem of estimating high dimensional sparse covariance matrix under (local) differential privacy.

considers the 1-dimensional private mean estimation of a Gaussian distribution with (un)known variance. The work that is probably most related to ours is

recently also studies the covariance matrix estimation via iterative eigenvector sampling. However, their method is just for the low dimensional case and with Frobenious norm as the error measure.

Distribution estimation under local differential privacy has been studied in gaboardi2018locally ; joseph2018locally . However, both of them study only the 1-dimensional Gaussian distribution. Thus, it is quite different from the class of distributions in our paper.

In this paper, we mainly use Gaussian mechanism to the covariance matrix, which has been studied in dwork2014analyze ; ge2018minimax ; dwangglobalsip18 . However, as it will be shown later, simply outputting the perturbed covariance can cause big error and thus is insufficient for our problem. Compared to these problems, ours is clearly more complicated.

Differential privacy dwork2006calibrating is by now a defacto standard for statistical data privacy which constitutes a strong standard for privacy guarantees for algorithms on aggregate databases. One likely reason that it gains so much popularity is its guarantee of no significant change on the outcome distribution when there is one entry change to the dataset. We say that two datasets D,D′ are neighbors if they differ by only one entry, denoted as D∼D′.

A randomized algorithm A is (ϵ,δ)-differentially private (DP) if for all neighboring datasets D,D′ and for all events S in the output space of A, the following holds

When δ=0, A is ϵ-differentially private.

Given any function q:Xn→Rp, the Gaussian Mechanism is defined as:

Let x1,x2,⋯,xn be n random samples from a p-variate distribution with covariance matrix Σ=(σij)1≤i,j≤p, where the dimensionality p is assumed to be high, i.e., p≫n≥Poly(logp).

We define the parameter space of s-sparse covariance matrices as the following:

where σ−j,j means the j-th column of Σ with the entry σjj removed. That is, a matrix in G0(s) has at most s non-zero off-diagonal elements in each column.

We assume that each xi is sampled from a 0-mean and sub-Gaussian distribution with parameter σ2, that is,

This means that all the one-dimensional marginals of xi have sub-Gaussian tails. We also assume that with probability 1, ∥xi∥2≤1. We note that such assumptions are quite common in the differential privacy literature, such as ge2018minimax .

Let Pd(σ2,s) denote the set of distributions of xi satisfying all the above conditions (ı.e., (2) and ∥xi∥2≤1) and with the covariance matrix Σ∈G0(s). The goal of private covariance estimation is to obtain an estimator Σpriv of the underlying covariance matrix Σ based on {x1,⋯,xn}∼P∈Pd(σ2,s) while keeping it differnetially private. In this paper, we will focus on the (ϵ,δ)-differential privacy. We use the ℓ2 norm to measure the difference between Σpriv and Σ, i.e., ∥Σpriv−Σ∥2.

If {x1,x2,⋯,xn} are sampled form a sub-Gaussian distribution in (2) and Σ∗=(σ∗)1≤i,j≤p=1n∑ni=1xixTi is the empirical covariance matrix, then there exist constants C1 and γ>0 such that ∀i,j∈[p]

for all |t|≤δ, where C1 and γ are constants and depend only on σ2. Specifically,

A direct way to obtain a private estimator is to perturb the empirical covariance matrix by symmetric Gaussian matrices, which has been used in previous work on private PCA, such as dwork2014analyze ; ge2018minimax . However, as we can see bellow, this method will introduce big error.

where N is a symmetric matrix with its upper triangle ( including the diagonal) being i.i.d samples from N(0,σ21); here σ21=2ln(1.25/δ)n2ϵ2, and each lower triangle entry is copied from its upper triangle counterpart. By tao2012topics , we know that ∥N∥2≤O(√pσ1)=O(√p√log1δnϵ). We can easily get that

where the second inequality is due to tropp2015introduction . However, we can see that the upper bound of the error in (8) is quite large in the high dimensional case.

Another issue of the private estimator in (7) is that it is not clear whether it is positive-semidefinite, a property that is normally expected from an estimator.

We note that one of the reasons that the private estimator ~Σ in (7) fails is due to the fact that some entries are quite large which make ∥~Σij−Σij∥2 large for some i,j. To see it more precisely, by (4) and (5) we can get the following, with probability at least 1−Cp−6, for all 1≤i,j≤p,

Thus, to reduce the error, it is natural to think of the following way. For those σij with larger values, we keep the corresponding ~σij in order to make their difference less than some threshold. For those σij with smaller values compared with (9), since the corresponding ~σij may still be large, if we threshold ~σij to 0, we can lower the error on ~σij−σij.

^Σ in order to make it positive semi-definite. See Algorithm 1 for detail.

For the matrix ^Σ in (10) after the first step of thresholding, we have the following key lemma.

For every fixed 1≤i,j≤p, there exists a constant C1>0 such that with probability at least 1−C1p−92, the following holds:

By the triangle inequality, it is easy to see that

Depending on the value of σij, we have the following three cases.

This is due to the followings:

For this case, we have

By Lemma 3, we have the following upper bound on the ℓ2-norm error of Σ+.

The output Σ+ of Algorithm 1 satisfies:

where the expectation is taken over the coins of the Algorithm and the randomness of {x1,x2,⋯,xn}.

We first show that ∥Σ+−Σ∥2≤2∥^Σ−Σ∥2. This is due to the following

where the third inequality is due to the fact that Σ is positive semi-definite.

We define event Eij as

We first bound the first term of (24). By the definition of Eij and Lemma 3, we can upper bounded it by

where the second inequality is due to the assumption that at most s elements of (σij)i≠j are non-zero.

where the first inequality is due to Hölder inequality and the second inequality is due to the fact that E(~σij−σij)8≤C3[E(σ∗ij−σij)8+En8ij]. Since nij is a Gaussian distribution, we have papoulis1965probability En8ij≤C4σ81=O(1nϵ). For the first term E(σ∗ij−σij)8, since xi is sampled from a sub-Gaussian distribution (2), by Whittle Inequality (Theorem 2 in whittle1960bounds or cai2012optimal ), the quadratic form σ∗ij satisfies E(σ∗ij−σij)8≤C51n for some positive constant C5>0.

For any 1≤w≤∞, the matrix ^Σ in (10) after the first step of thresholding satisfies

Comparing the bound in the above corollary with the optimal minimax rate Θ(slogpn) in cai2012optimal for the non-private case, we can see that the impact of the differential privacy is to make the number of efficient sample from <span class="mj