Elimination of unknowns in a system of differential equations is often required when analysing (possibly nonlinear) dynamical systems models, where only a subset of variables are observable. One such analysis, identifiability, often relies on computing input-output relations via differential algebraic elimination. Determining identifiability, a natural prerequisite for meaningful parameter estimation, is often prohibitively expensive for medium to large systems due to the computationally expensive task of elimination. We propose an algorithm that computes a description of the set of differential-algebraic relations between the input and output variables of a dynamical system model. The resulting algorithm outperforms general-purpose software for differential elimination on a set of benchmark models from literature. We use the designed elimination algorithm to build a new randomized algorithm for assessing structural identifiability of a parameter in a parametric model. A parameter is said to be identifiable if its value can be uniquely determined from input-output data assuming the absence of noise and sufficiently exciting inputs. Our new algorithm allows the identification of models that could not be tackled before. Our implementation is publicly available as a Julia package at https://github.com/SciML/StructuralIdentifiability.jl. 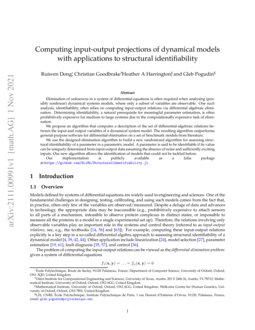 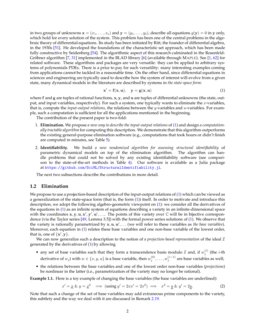 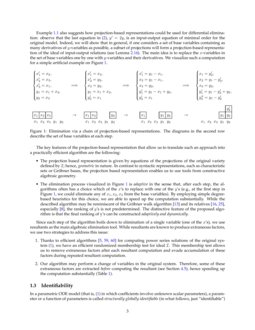 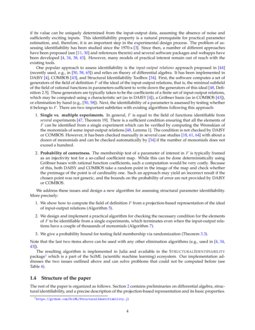 Bounds for elimination of unknowns in systems of differential-algebraic equations

Design And Analysis Of Three-Output Open Differential with 3-DOF

Models defined by systems of differential equations are widely used in engineering and sciences. One of the fundamental challenges in designing, testing, calibrating, and using such models comes from the fact that, in practice, often only few of the variables are observed/measured. Despite a deluge of data and advances in technology, the appropriate data may be inaccessible (e.g., prohibitively expensive to attach sensors to all parts of a mechanism, infeasible to observe protein complexes in distinct states, or impossible to measure all the proteins in a model in a single experimental set up). Therefore, the relations involving only observable variables play an important role in the systems and control theory (referred to as input-output relations, see, e.g., the textbooks [Conte2007, Sontag1998] and [Wang1995]). For example, computing these input-output relations explicitly is a key step in a so-called differential algebra approach to assessing structural identifiability of a dynamical model [OllivierPhD, DAISY, LG94, MED2009]. Other application include linearization [Glumineau1996], model selection [selection], parameter estimation [Verdiere2005, DenisVidal2003], fault diagnosis [Jiafan2009, Staroswiecki2001], and control [Komatsu2020].

The problem of computing the input-output relations can be viewed as the differential elimination problem: given a system of differential equations

in two groups of unknowns x=(x1,…,xs) and y=(y1,…,yℓ), describe all equations g(y)=0 in y only, which hold for every solution of the system. This problem has been one of the central problems in the algebraic theory of differential equations. Its study has been initiated by Ritt, the founder of differential algebra, in the 1930s [Ritt]. He developed the foundations of the characteristic set approach, which has been made fully constructive by Seidenberg [Seidenberg]. The algorithmic aspect of this research culminated in the Rosenfeld-Gröbner algorithm [Boulier2, Hubert2] implemented in the BLAD library [blad] (available through Maple). See [diff_Thomas, WANG2002] for related software. These algorithms and packages are very versatile: they can be applied to arbitrary systems of polynomials PDEs. There is a price to pay for such versatility: many interesting examples coming from applications cannot be tackled in a reasonable time. On the other hand, since differential equations in sciences and engineering are typically used to describe how the system of interest will evolve from a given state, many dynamical models in the literature are described by systems in the state-space form:

where f and g are tuples of rational functions, x, y, and u are tuples of differential unknowns (the state, output, and input variables, respectively). For such a system, one typically wants to eliminate the x-variables, that is, compute the input-output relations, the relations between the y-variables and u-variables. For example, such a computation is sufficient for all the applications mentioned in the beginning.

The contribution of the present paper is two-fold:

The next two subsections describe the contributions in more detail.

We propose to use a projection-based description of the input-output relations of (1) which can be viewed as a generalization of the state-space form (that is, the form (1)) itself. In order to motivate and introduce this description, we adopt the following algebro-geometric viewpoint on (1): we consider all the derivatives of the equations in (1) as an infinite system of equations describing a variety in an infinite-dimensional space with the coordinates x,y,u,x′,y′,u′,…. The points of this variety over C will be in bijective correspondence (via the Taylor series [noether, Lemma 3.5]) with the formal power series solutions of (1). We observe that the variety is rationally parametrized by x,u,u′,… (we will refer to these variables as the base variables). Moreover, each equation in (1) relates these base variables and one non-base variable of the lowest order, that is, one of {x′,y}.

Note that such a change of the set of base variables may add extraneous prime components to the variety, this subtlety and the way we deal with it are discussed in Remark LABEL:rem:extra.

Example 1.1 also suggests how projection-based representations could be used for differential elimination: observe that the last equation in (2), y′=2y, is an input-output equation of minimal order for the original model. Indeed, we will show that in general, if one considers a set of base variables containing as many derivatives of y-variables as possible, a subset of projections will form a projection-based representation of the ideal of input-output relations (see Lemma LABEL:lem:proj_proj). The main idea is to replace the x-variables in the set of base variables one by one with y-variables and their derivatives. We visualize such a computation for a simple artificial example on Figure LABEL:tab:yound_oscillator.