In this technical report, we present a joint effort of four groups, namely GT, USTC, Tencent, and UKE, to tackle Task 1 - Acoustic Scene Classification (ASC) in the DCASE 2020 Challenge. Task 1 comprises two different sub-tasks: (i) Task 1a focuses on ASC of audio signals recorded with multiple (real and simulated) devices into ten different fine-grained classes, and (ii) Task 1b concerns with classification of data into three higher-level classes using low-complexity solutions. For Task 1a, we propose a novel two-stage ASC system leveraging upon ad-hoc score combination of two convolutional neural networks (CNNs), classifying the acoustic input according to three classes, and then ten classes, respectively. Four different CNN-based architectures are explored to implement the two-stage classifiers, and several data augmentation techniques are also investigated. For Task 1b, we leverage upon a quantization method to reduce the complexity of two of our top-accuracy three-classes CNN-based architectures. On Task 1a development data set, an ASC accuracy of 76.9% is attained using our best single classifier and data augmentation. An accuracy of 81.9% is then attained by a final model fusion of our two-stage ASC classifiers. On Task 1b development data set, we achieve an accuracy of 96.7% with a model size smaller than 500KB. Code is available: https://github.com/MihawkHu/DCASE2020_task1. 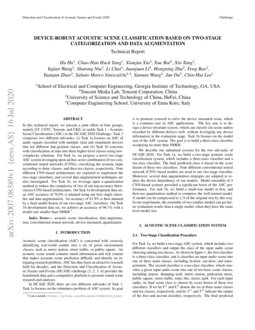 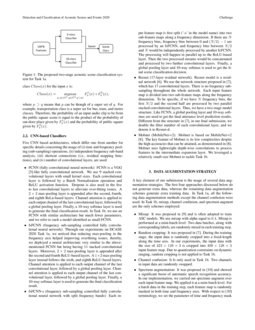 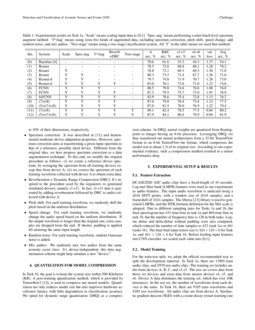 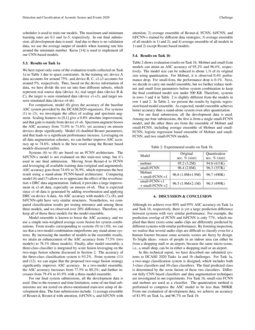 Acoustic scene classification (ASC) is concerned with correctly identifying real-world sounds into a set of given environment classes, such as metro station, street traffic, or public square. An acoustic scene sound contains much information and rich content that makes accurate scene prediction difficult, and thereby an intriguing research problem. ASC has thus been an attractive research field for decades, and the Detection and Classification of Acoustic Scenes and Events (DCASE) challenge [7, 8, 9, 4] provides the benchmark data and a competitive platform to promote sound scene research and analyses.

In DCASE 2020, there are two different sub-tasks of Task 1. Task 1a focuses on the robustness problem of ASC system. Its goal is to promote research to solve the device mismatch issue, which is a common case in ASC applications. The key aim is to design a device-invariant system, which can classify ten scene audios recorded by different devices well, without leveraging any device information in the evaluation stage. Task 1b focuses on the model size of the ASC system. The goal is to build a three-class classifier occupying no more than 500KB.

We describe our submitted systems for the two sub-tasks of DCASE 2020. For Task 1a, we build a two-stage acoustic scene classification system, which includes a three-class classifier and a ten-class classifier. The final predicted class is based on the score fusion of these two classifiers. Four different convolutional neural network (CNN) based models are used in our two-stage classifier. Moreover, several data augmentation strategies are adopted to reduce the device dependency of our models. Model ensemble of 4 CNN-based systems provided a significant boost of the ASC performance. For task 1b, we build a small-size model at first, and then use quantization method to compress the well-trained model. A model can be compressed to 1/8 of the original size by this way. In our experiments, the ensemble of two smaller models can get better evaluation results than a single model, when they have the same level model size.

For Task 1a, we build a two-stage ASC system, which includes two different classifiers and output the class of the input audio scene choosing among ten classes. As shown in figure 1, the first classifier is a three-class classifier, and it classifies an input audio scene into one of three main classes, including in-door, out-door, and transportation. The second classifier is a ten-class classifier, which classifies a given input audio scene into one of ten basic scene classes, including airport, shopping mall, metro station, pedestrian street, public square, street traffic, tram, bus, metro, park. For each input audio, its final scene class is chosen by score fusion of those two classifiers. If we let C1 and C2 denote the set of three main classes and ten classes, respectively, and let F1 and F2 indicate the output of the first and second classifier, respectively. The final predicted class Class(x) for the input x is:

. For example, transportation class is a super set for bus, tram, and metro classes. Therefore, the probability of an input audio clip to be from the public square scene is equal to the product of the probability of out-door place given by

F1p(x) and the probability of public square given by F2q(x).

Five CNN based architectures, which differ one from another for specific details concerning the usage of (i) time and frequency pooling (sub-sampling) operations, (ii) independent frequency sub-band analysis, (iii) shortcut connections (i.e., residual mapping functions), and (iv) number of convolutional layers, are used:

In Task 1b, the goal is to keep the system size within 500 Kilobytes (KB). A post-training quantization method, which is provided by Tensorflow2 [1]

, is used to compress our neural models. Quantization not only reduces model size but also improves hardware accelerator latency with little degradation in classification accuracy. We opted for dynamic range quantization (DRQ) as a compression scheme. In DRQ, neural weights are quantized from floating-point to integer having an 8-bit precision. Leveraging DRQ, we thus transferred our neural architectures from a 32-bit TensorFlow format to an 8-bit TensorFlow-lite format, which compresses the model size to about

1/8 of its original size. According to our experimental evidence, such a compression method resulted in a minor performance drop.

DCASE2020 ASC audio clips have a fixed-length of 10 seconds. Log-mel filter bank (LMFB) features were used in our experiments as audio features. The input audio waveform is analyzed using a 2048 SFFT points, with a window size of 2048 samples, and a frameshift of 1024 samples. The librosa [6]

library is used to generated LMFBs, and the HTK formula definition for the Mel scale is adopted. Due to different sampling rates for Tasks 1a and 1b, the final spectrogram has 431-time bins in task 1a and 469-time bins in task 1b, but the number of frequency bins is 128 in both tasks. Log-me deltas and delta-deltas without padding were also computed, which reduced the number of time samples to 423 (task 1a) or 461 (tasks 1b). The final final input tensor size is

For the train-test split, we adopt the official recommended way to split the development material. In Task 1a, there are 13965 train audio clips, and 2970 test audio clips. The training set includes audio from devices A, B, C, and s1-s3. The test set covers data from those six devices and extra data from unseen devices s4, s5, and s6. Device A data dominates the training set, which has over 10K utterances. In the test set, the number of waveforms from each device is the same. In Task 1b, there are 9185 train waveforms and 4185 test waveforms. All audio clips are from device A. Stochastic gradient descent (SGD) with a cosine-decay-restart learning rate scheduler is used to train our models. The maximum and minimum learning rates are 0.1 and 1e-5, respectively. In our final submission, all development data is used. And due to there is no validation data, we use the average output of models when learning rate hits around the minimum number. Keras

[2] is used to implement all our CNN-based models.

For comparison, model (0) gives the accuracy of the baseline ASC system provided by the DCASE2020 organizers. For systems (1) to (3), we investigate the effect of scaling and spectrum augment. Scaling features to [0,1] give a 0.8% absolute improvement, and that gain is mainly from device s1-s6. Spectrum augment boosts the ASC accuracy from 71.0% to 71.6%, yet accuracy on unseen devices drops significantly. Model (4) doubled Resnet parameters, and that leads to a significant performance increase. Leveraging on all data augmentation schemes, we can further improve ASC accuracy up to 74.6%, which is the best result using the Resnet based models discussed earlier.

Systems (6) to (8) are based on an FCNN architecture. The fsFCNN-s model is not evaluated on this train-test setup, but it’s used in our final submission. Moving from Resnet-d to FCNN and leveraging all available training data (original and augmented), ASC accuracy goes from 74.6% to 76.9%, which represents the best result using a stand-alone FCNN-based architecture. Comparing model (6) and (7) allows us to appreciate the effect of the reverberation + DRC data augmentation. Indeed, it provides a large improvement in s1-s6 data, especially on unseen s4-s6. That is expected since s1-s6 data is generated by adding reverberation and applying DRC on device A data. An ASC accuracy with models (7), (8), and fsFCNN-split have very similar structures. Nonetheless, we compared classification results per testing utterance and among those three models, and we observed over 20% difference. Therefore, we keep all of those three models for the model ensemble.

Model ensemble is known to boost the ASC accuracy, and we use a simple non-weighted average score fusion for system combinations. From results corresponding to systems (9) to (10), we can see that a two-model combination outperforms any stand-alone systems. By increasing the number of models in the ensemble results, we attain an enhancement of the ASC accuracy from 77.5% (two models) to 78.1% (three models). Finally, after model ensemble, a three-class classifier is integrated by score fusion leveraging on the two-stage fusion scheme discussed in Section 2. The accuracy of the three-class classification system is 93.2%. From systems (11) and (12), we can argue that the proposed two-stage fusion strategy significantly improves ASC accuracy. In a two-model ensemble, the ASC accuracy increases from 77.5% to 80.2%; and further increases from 79.4% to 81.9% with a three-model ensemble.

Table 2 shows evaluation results on Task 1b. Mobnet and small-fcnn models can attain an ASC accuracy of 95.2% and 96.4%, respectively. The model size can be reduced to about 1/8 of its original size using quantization. For Mobnet, it is observed 0.4% performance drop. For small-fcnn, the performance drop is 0.1%. Next, we decide to carry out model ensemble, but we further reduce mobnet and small fcnn parameters before system combination to keep the final combined model size under 500 KB. Therefore, systems in rows 3 and 4 in Table  2 is slightly different from the models in row 1 and 2. In Table 2

, we present the results by logistic regression based model ensemble. As expected, model ensemble achieves better accuracy than a stand-alone system even after quantization.

Although we achieve over 80% and 95% ASC accuracy on Task 1a and Task 1b, respectively, there is yet a large prediction difference between systems with very similar performance. For example, the prediction overlap of FCNN and fsFCNN is only 77%, which implied that there exists some audio clips are differently predicted by different systems with similar performance. By listening inspection, we realize that several audio clips are difficult to classify even for a human listener because some acoustic scenes are fuzzy by design. To bright ideas: voices of people in an indoor area can either be from a shopping mall or an airport, because the same micro-scene, i.e., a small shop, can be in either a shopping mall or an airport.

In this technical report, we have described our submitted systems to DCASE 2020 Tasks 1a and 1b challenges. For Task 1a, a two-stage classification system is designed, which includes both 3-class classifiers and 10-class classifiers. The final predicted class is determined by the score fusion of these two classifiers. Different fully CNN based classifiers and data augmentation techniques are investigated in our experiments. For Task 1b, small-size FCNN and mobnet are used as a classifier. The quantization method is performed to compress the ASC model to be less than 500KB. From our evaluation of development data, we achieve an accuracy of 81.9% on Task 1a, and 96.7% on Task 1b.