The image quality of portable supine chest radiographs is inherently poor due to low contrast and high noise. The endotracheal intubation detection requires the locations of the endotracheal tube (ETT) tip and carina. The goal is to find the distance between the ETT tip and the carina in chest radiography. To overcome such a problem, we propose a feature extraction method with Mask R-CNN. The Mask R-CNN predicts a tube and a tracheal bifurcation in an image. Then, the feature extraction method is used to find the feature point of the ETT tip and that of the carina. Therefore, the ETT-carina distance can be obtained. In our experiments, our results can exceed 96% in terms of recall and precision. Moreover, the object error is less than 4.7751± 5.3420 mm, and the ETT-carina distance errors are less than 5.5432± 6.3100 mm. The external validation shows that the proposed method is a high-robustness system. According to the Pearson correlation coefficient, we have a strong correlation between the board-certified intensivists and our result in terms of ETT-carina distance. 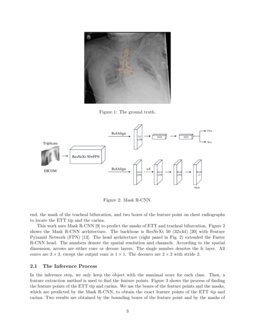 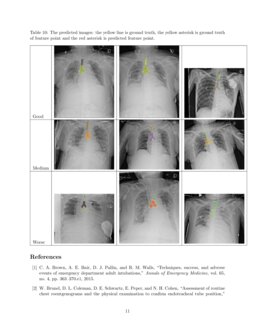 ChestNet: A Deep Neural Network for Classification of Thoracic Diseases on Chest Radiography

Cardiac image segmentation is a powerful tool in regard to diagnostics a...
Christian Schmidt, et al. ∙

Mechanical ventilation via endotracheal intubation is a life-saving procedure for patients with acute respiratory failure [16]. However, improper depth of endotracheal tube (ETT) placement is not rare during endotracheal intubation and may cause catastrophic effects if not recognized promptly after intubation [2, 1, 15]. An ETT being placed in too shallow a position may increase the risk of accidental extubation or air leak. On the contrary, a deeply positioned ETT may lead to a collapse of the nonventilated lung and hyperinflation of the intubated lung with consequent tension pneumothorax. Therefore, it is essential to measure the distance between the ETT tip and the carina on a chest radiograph (CXR) to confirm the ETT is being placed at the proper depth and to avoid potential life-threatening complications in intensive care units (ICUs) [14, 10].

placed chest radiographs into 12 categories, including bronchial insertion and distance from the carina at 1.0-cm intervals (0.0–0.9 cm, 1.0–1.9 cm, etc.) and greater than 10 cm. They used Inception V3 to classify chest radiographs, which implies predicting the ETT-carina distance interval.

The rest of this paper is organized as follows. Section 2 proposes a method for endotracheal intubation detection. Section 3 shows the experiment results. Section 4 draws conclusions.

This work uses Mask R-CNN [9] to predict the masks of ETT and tracheal bifurcation. Figure 2 shows the Mask R-CNN architecture. The backbone is ResNeXt 50 (32x4d) [20] with Feature Pyramid Network (FPN) [13]. The head architecture (right panel in Fig. 2) extended the Faster R-CNN head. The numbers denote the spatial resolution and channels. According to the spatial dimension, arrows are either conv or deconv layers. The single number denotes the fc layer. All convs are 3×3, except the output conv is 1×1. The deconvs are 2×2

This study was approved by the institutional review board (IRB) of the National Cheng Kung University Hospital (IRB number: A-ER-108-305). Chest radiographs of intubated ICU patients were identified by data research in the institutional Picture Archiving and Communication System (PACS), and the underlying DICOMs were exported after de-identification. The dataset had a total of 1,842 portable chest radiographs. The ground-truth annotations were labeled by two board-certified intensivists. Moreover, we used 150 images from outsider hospitals to validate.

Let MP be the middle point of (P2,P3) in the ground truth annotation. The distance between the point MP and the predicted feature point of the ETT tip is the object error of the ETT tip. Moreover, the distance between the point P9 in the annotated chest radiographs and the predicted feature point of the carina is the object error of the carina. We consider the object to have been successfully detected if the Dice Coefficient was no less than 0.6 or the object error was no more than 100 pixels. We call the detected object according to a true positive. A false positive is an error in object detection in which a mask incorrectly indicates an object. Moreover, a false negative is the error in which the model did not indicate the object. The definitions of recall and precision are:

, and each mini batch has 5 images. The model was trained using an SGD optimizer with a momentum of 0.9 and a weight decay of 0.0001. The learning rate was 0.001. Training was performed for 120 epochs, decreasing the learning rate by a factor of 0.1 after 80 epochs and 110 epochs.

For most critically ill patients, endotracheal intubation with mechanical ventilation is crucial to maintain their lives. Malposition of the ETT can cause serious harm to the patients if not detected in a timely manner. Clinicians need to verify proper ETT positioning by measuring the distance between the ETT tip and the carina on a portable supine CXR. If malposition is detected, clinicians need to adjust the ETT position according to measured distance. However, it is not easy to clearly identify the positions of the ETT and the carina on portable supine CXRs due to the low image contrast and abundant noise at the region of interest, especially for clinicians with less experience. An AI system to reliably identify ETT and carina positions on portable supine CXRs may lead to rapid and accurate identification of improper ETT position and reduce the risk of critically ill patients.

This paper proposed a feature extraction method with Mask R-CNN to predict feature points of tube and tracheal bifurcation in an image. In our experiments, our result exceeded 96% in terms of recall and precision. The object error was less than 4.7751±5.3420 mm, and the ETT-carina distance error was less than 5.5432±6.3100 mm. Moreover, the proposed system labeled the feature point of the ETT tip and that of the carina, which can assist intensivists to monitor ICU patients’ condition. According to the Pearson correlation coefficient, we have a strong correlation between the board-certified intensivists and our result in terms of ETT-carina distance. The external validation shows that the proposed method is a high-robustness system.

Although the proposed AI system can overcome problems from a portable CXR with lower contrast and higher noise, the system cannot operate normally in CXRs with extremely poor quality due to the improper operation of the X-ray machine. Therefore, future work is to suggest a clinical guideline and to obtain feedback from medical staff.

The work was supported by the Ministry of Science and Technology, Taiwan, R.O.C. under Grants no. MOST 110-2634-F-006-012 - and by Higher Education Sprout Project, Ministry of Education to the Headquarters of University Advancement at National Cheng Kung University (NCKU).