In this paper, we provide an overview of development of a structured light 3D-scanner based on combination of binary-coded patterns and sinusoidal phase-shifted fringe patterns called Coded Phase-shift technique. Further, we describe the experiments performed to evaluate measurement accuracy and precision of the developed system. A study of this kind is expected to be helpful in understanding the basic working of current structured-light 3D scanners and the approaches followed for their performance assessment. 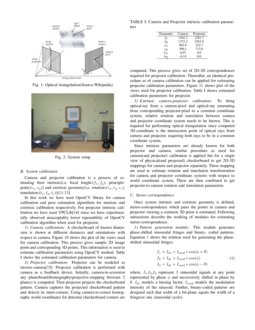 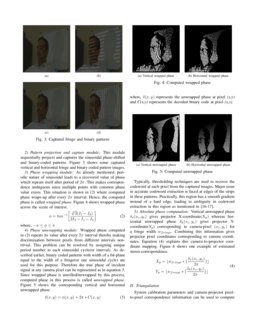 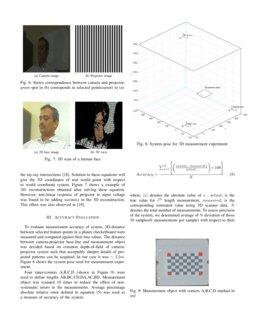 Displacement is an important measurement for the assessment of structura...
Jongbin Won, et al. ∙

Phase-shift approach[1][2] encodes the projector pixel coordinates with the phase of projected sinusoidal fringe patterns. When this pattern is projected onto the scene of interest it codifies the scene as well using the phase of the incident sinusoidal signal. Camera captures the scene with projected patterns. Recovery of phase information at all captured points in the scene provides information regarding source projector pixel(using phase value). Hence stereo-correspondence between camera and projector pixels can be established. But since the sinusoidal patterns are periodic in nature, the phase value repeats after every 2π(or a period) therefore binary coded patterns[3] are used in addition to assist in recovering original phase at each point in the captured scene by assigning unique period number to each cycle of sinusoidal fringe[4]. This approach eliminates the ambiguity due to periodicity of sinusoidal fringes. This combined approach has the advantage of high accuracy of phase-shift technique and high robustness against noise as of binary-coded pattern based technique[3].

Development work to realize this approach was initiated because in our knowledge there is no Open-source implementation of this technique which can be used as a starting point for accurate 3D measurements. Authors in [5-6] have developed such systems but in [5] there are no provisions for system calibration and the work found in [6] do not have documentation and is developed only for Windows platform.

Furthermore, the performance of a metrology equipment has been conventionally measured in terms of its measurement accuracy and precision(or repeatability). Recently, there have been many attempts to evaluate performance of another popular 3D sensor Microsoft Kinect[7-10]. Same methods can be applied to evaluate performance of our developed system. But these approaches assess measurement accuracy either with respect to 3D data obtained from laser scanner[7] which requires accurate calibration of laser scanner itself, or confirm to VDI/VDE 2634 standard which requires accurate fabrication of sphere balls and hexagonal structures which again requires sophisticated fabrication[9]. To avoid such overheads, this paper reports a simple and straightforward method for assessing measurement accuracy. Further, we report the precision of the developed system.

In section II, process for estimating stereo- correspondence using Coded phase-shift technique is described followed by description of process of system calibration and finally, triangulation. In section III, approach used for evaluation of measurement accuracy and precision has been described. Section IV concludes the paper.

A structured-light 3D scanner based on optical triangulation(shown in Figure 1) needs to determine the correspondence between camera and projector pixels. This goal is achieved by projection of a known pattern on object of interest. This pattern(e.g. light stripes in Figure 1) assign a unique code to each point on the surface of object. Camera captures a view of scene and recovers this code at each pixel. This process indirectly relates a projector column(strip number in Figure 1) or row or a unique combination of row and column to a camera pixel. Once the correspondence is known, equations for optical rays emanating from any corresponding pair of camera and projector pixels needs to be known in real world units, for which system calibration is performed. Given stereo-correspondence and system calibration information, optical triangulation can be performed to compute 3D coordinates for each real-world point seen by both camera and projector.

where, I1,I2,I3 represent 3 sinusoidal signals at any point represented by phase ϕ and successively shifted in phase by θ. Idc models a biasing factor, Imod models the modulation intensity of the sinusoid. Further, binary-coded patterns are designed such that width of a bit-plane equals the width of a fringe(or one sinusoidal cycle).

As already mentioned, periodic nature of sinusoidal leads to a recovered value of phase which repeats itself after period of 2π. This makes correspondence ambiguous since multiple points with common phase value exists. This situation is shown in (2) where computed phase wraps-up after every 2π interval. Hence, the computed phase is called wrapped phase. Figure 4 shows wrapped phase across the scene of interest.

Wrapped phase computed in (2) repeats its value after every 2π interval thereby making discrimination between pixels from different intervals non-trivial. This problem can be resolved by assigning unique period number to each sinusoidal cycle(or interval). As described earlier, binary coded patterns with width of a bit-plane equal to the width of a fringe(or one sinusoidal cycle) are used for this purpose. Therefore the true phase of incident signal at any camera pixel can be represented as in equation 3. Since wrapped phase is unrolled/unwrapped by this process, computed phase in this process is called unwrapped phase. Figure 5 shows the corresponding vertical and horizontal unwrapped phase.

System calibration parameters and camera-projector pixel-to-pixel correspondence information can be used to compute the ray-ray intersections [18]. Solution to these equations will give the 3D coordinates of real world point with respect to world coordinate system. Figure 7 shows a example of 3D- reconstructions obtained after solving these equation. However, non-linear response of projector to input voltage was found to be adding waviness in the 3D reconstruction. This effect was also observed in [19].

To evaluate measurement accuracy of system, 3D-distance between selected feature-points in a planer checkerboard were measured and compared against their true values. The distance between camera-projector base-line and measurement object was decided based on common depth-of-field of camera-projector system such that acceptably sharper details of projected patterns can be acquired. In our case it was ∼2.2m. Figure 8 shows the system pose used for measurement experiment.

Four inner-corners A,B,C,D (shown in Figure 9) were used to define lengths AB,BC,CD,DA,AC,BD. Measurement object was scanned 10 times to reduce the effect of non-systematic errors in the measurements. Average percentage absolute relative error defined in equation (5) was used as a measure of accuracy of the system.

where, |x| denotes the absolute value of x , actuali is the true value for ith length measurement, measuredi is the corresponding estimated value using 3D scanner data. N denotes the total number of measurements. To assess precision of the system, we determined average of % deviation of those 10 samples(6 measurements per sample) with respect to their mean values as defined in equation (6).

We have described a system for 3D scene reconstruction based on coded phase shift approach. Measurement accuracy and precision of system was evaluated and found to be within 1% of true and mean measurements respectively. Developed system is designed to be experimental in nature allowing modification in various structured light and system calibration parameters. This will provide us a platform to investigate the problems related with system calibration specifically the effect of relative pose of camera and projector used for calibration on its accuracy(technically, sensor-planning). In addition, it will allow us to study the problem of projector-camera system non-linearity which is resulting in waviness in the 3D scan results. Recently, [20-21] have reported studies on effect of global illumination and projector defocus on accuracy of binary coded and phase shifting algorithms for stereo correspondence. These works have motivated our ongoing investigation of these issues in order to establish objective criteria for selecting a particular spatial frequency for binary coded and phase shifting patterns. This will reduce requirement of manual tweaking of system parameters to get optimal 3D measurement accuracy. Further, we have planned to extend the system to be able to do accurate 360 degree scans of the object.

Authors would like to thank Computer Division,Bhabha Atomic Research Centre technical staff and administration for providing them support and facilities to pursue this work.