Projective Reed-Muller codes correspond to subcodes of the Reed-Muller code in which the polynomials being evaluated to yield codewords, are restricted to be homogeneous. The Generalized Hamming Weights (GHW) of a code C, identify for each dimension ν, the smallest size of the support of a subcode of C of dimension ν. The GHW of a code are of interest in assessing the vulnerability of a code in a wiretap channel setting. It is also of use in bounding the state complexity of the trellis representation of the code. In prior work by the same authors, a code-shortening algorithm was employed to derive upper bounds on the GHW of binary projective, Reed-Muller (PRM) codes. In the present paper, we derive a matching lower bound by adapting the proof techniques used originally for Reed-Muller (RM) codes by Wei. This results in a characterization of the GHW hierarchy of binary PRM codes. 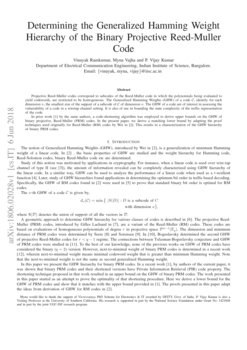 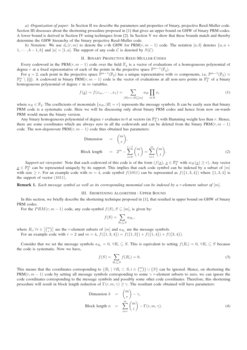 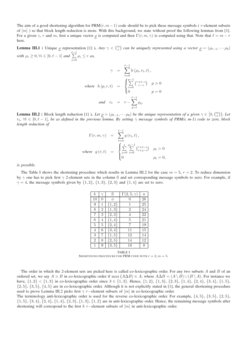 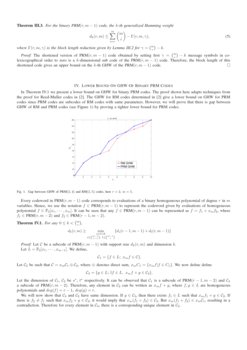 The d-th hypersimplex of R^s is the convex hull in R^s of all integral p...
Nupur Patanker, et al. ∙

The d-th hypersimplex of R^s is the convex hull in R^s of all integral p...
Nupur Patanker, et al. ∙

In this work, we explore the relationship between free resolution of som...
Ignacio Garcia-Marco, et al. ∙

The aim of this work is to algebraically describe the relative generaliz...
Delio Jaramillo-Velez, et al. ∙

A longstanding open problem in coding theory is to determine the best (a...
Leonardo Nagami Coregliano, et al. ∙

A note on the generalized Hamming weights of Reed-Muller codes

In this note, we give a very simple description of the generalized Hammi...
Peter Beelen, et al. ∙

On two-fold packings of radius-1 balls in Hamming graphs

A λ-fold r-packing in a Hamming metric space is a code C such that the r...
Denis S. Krotov, et al. ∙

The notion of Generalized Hamming Weights (GHW), introduced by Wei in [2], is a generalization of minimum Hamming weight of a linear code. In [2] , the basic properties of GHW are studied and the weight hierarchy for Hamming code, Reed-Solomon codes, binary Reed-Muller code etc are determined.

Study of this notion was motivated by applications in cryptography. For instance, when a linear code is used over wire-tap channel of type II (see [3]), the amount of information revealed can be completely characterized using GHW hierarchy of the linear code. In a similar way, GHW can be used to analyze the performance of a linear code when used as a t-resilient function [4]. Later, study of GHW hierarchies found applications in determining the optimum bit order in trellis based decoding. Specifically, the GHW of RM codes found in [2] were used in [5] to prove that standard binary bit order is optimal for RM codes.

The ν-th GHW of a code C is given by,

denotes the union of support of all the vectors in

A geometric approach to determine GHW hierarchy for various classes of codes is described in [6]. The projective Reed-Muller (PRM) codes, introduced by Gilles Lachaud in [7], are a variant of the Reed-Muller (RM) codes. These codes are based on evaluations of homogeneous polynomials of degree r in projective space Pm−1(Fq). The dimension and minimum distance of PRM codes were determined by Serre [8] and S\orensen [9]. In [10], Boguslavsky determined the second GHW of projective Reed-Muller codes for r<q−1 regime. The connections between Tsfasman-Boguslavsky conjecture and GHW of PRM codes were studied in [11]. To the best of our knowledge, none of the previous works on GHW of PRM codes have considered the binary (q=2) version. However, next-to-minimal weight of binary PRM codes is determined in a recent work [12], wherein next-to-minimal weight means minimal codeword weight that is greater than minimum Hamming weight. Note that the next-to-minimal weight is not the same as second generalized Hamming weight.

In this paper we present the GHW hierarchy for binary PRM codes. In a recent work [1], by authors of the current paper, it was shown that binary PRM codes and their shortened versions have Private Information Retrieval (PIR) code property. The shortening technique proposed in that work resulted in an upper bound on the GHW of binary PRM codes. The work presented in this paper started as an attempt to prove the optimality of that shortening procedure. Here we derive a lower bound for the GHW of PRM codes and show that it matches with the upper bound provided in [1]. The proofs presented in this paper adapt the ideas from derivation of GHW for RM codes in [2].

In Section II we describe the parameters and properties of binary, projective Reed-Muller code. Section III discusses about the shortening procedure proposed in [1] that gives an upper bound on GHW of binary PRM codes. A lower bound is derived in Section IV using techniques from [2]. In Section V we show that these bounds match and thereby determine the GHW hierarchy of the binary projective Reed-Muller code.

Every codeword in the PRM(r,m−1) code over the field Fq is a vector of evaluations of a homogeneous polynomial of degree r at a fixed representative of each of the points in the projective space Pm−1(Fq).

For q=2, each point in the projective space Pm−1(F2) has a unique representative with m components, i.e, Pm−1(F2)≃Fm2∖{0–}. A codeword in binary PRM(r,m−1) code is the vector of evaluations at all non-zero points in Fm2 of a binary homogeneous polynomial of degree r in m variables.

where aR∈F2. The coefficients of monomials {aR,|R|=r} represents the message symbols. It can be easily seen that binary PRM code is a systematic code. Here we will be discussing only about binary PRM codes and hence from now on-wards PRM would mean the binary version.

Any binary homogeneous polynomial of degree r evaluates to 0 at vectors (in Fm2) with Hamming weight less than r. Hence, there are some coordinates which are always zero in all the codewords and can be deleted from the binary PRM(r,m−1) code. The non-degenerate PRM(r,m−1) code thus obtained has parameters:

Each message symbol as well as its corresponding monomial can be indexed by a r-element subset of [m].

In this section, we briefly describe the shortening technique proposed in [1], that resulted in upper bound on GHW of binary PRM codes.

where Ri,∀i∈[(mr)] are the r-element subsets of [m] and aRi are the message symbols.

Consider that we set the message symbols aRi=0, ∀Ri⊆S. This is equivalent to setting f(Ri)=0, ∀Ri⊆S because the code is systematic. Now we have,

The aim of a good shortening algorithm for PRM(r,m−1) code should be to pick these message symbols ( r-element subsets of [m] ) so that block length reduction is more. With this background, we state without proof the following lemmas from [1]. For a given γ, r and m, first a unique vector ρ–– is computed and then Γ(r,m,γ) is computed using that. Note that ℓ=m−r here.

For the binary PRM(r,m−1) code, the k-th generalized Hamming weight

where Γ(r,m,γ) is the block length reduction given by Lemma III.2 for γ=(mr)−k.

Proof: Let C be a subcode of PRM(r,m−1) with support size dk(r,m) and dimension k.

We will now show that C3 and C2 have same dimension. If g∈C3, then there exists f1∈L such that xmf1+g∈C2. If there is f2≠f1 such that xmf2+g∈C2, it would imply that xm(f1+f2)∈C2. But xm(f1+f2)∈xmC1, resulting in a contradiction. Therefore for every element in C3, there is a corresponding unique element in C2.

The support size of subcode C is given by

In this Section, we will first state a well-known theorem from extremal set theory and then use it to prove the GHW results.

Let Ur denote the family of all r-element subsets of [m]. For a collection K⊆Ur, (upward) shadow is given by

Let σ(r,m,k) denote the support size of subcode formed by monomials corresponding to first k r-element subsets of [m] in the anti-lexicographic order. Note that this subcode is same as the shortened PRM code formed by setting (mr)−k message symbols picked in co-lexicographic order to zero. Since this subcode is k dimensional subcode of PRM(r,m−1) we have σ(r,m,k)≥dk(r,m).

Proof: Suppose s∗,t∗ be the values that achieve minimum on the RHS. Then RHS =σ(r−1,m−1,s∗)+σ(r,m−1,t∗). The RHS corresponds to the support size of subcode formed by k monomials each of degree r, with s∗ of them containing m and t∗ of them without m. Now, from Cor V.2 we know that picking the first k r-element sets in anti-lexicographic order results in minimum support size σ(r,m,k). Hence, RHS ≥σ(r,m,k). □

The support of subcode formed by first k monomials in anti-lexicographic order is the kth GHW of PRM(r,m−1).

Proof: For the case of m=1, the statement trivially follows. Now, we use induction over m to prove the theorem and hence assume it is true for m−1.

Let C be the subcode with rank k and support size dk(r,m). Then by Theorem IV.1 we have,

where Γ is obtained from Theorem III.2

The above corollary proves the optimality of shortening procedure for PRM codes given in [1] and provides the complete GHW hierarchy. GHW hierarchy of PRM codes for some parameters are listed in Table II. The next corollary gives simplified expression for GHW in some special cases.

Proof: Pick first k, r-element subsets of [m] in anti-lexicographic order. These sets are of the form:

The GHW for PRM code obtained in Cor V.8 is by considering the sets to be removed. In the GHW derivation for Reed-Muller codes in [2], the counting is done taking into account the sets that remain. The following lemmas gives an expression for GHW of PRM codes using a similar approach.

Any 0≤k<(mr) can be uniquely represented by (r,m) canonical form given by

Proof: We induct over variable m.

For m=1, the result is trivial. Assume that the statement true for m−1.

Proof: Here, we induct on variable m. Assume that the result holds for the case of m−1.

Let K be the set of first k, r-element subsets of [m] in anti-lexicographic order.

It can be observed that |S1(K)| is same as the block length of PRM(r−1,m−2) code. Therefore by induction assumption,