There has been an increase in the use of resilient control algorithms based on the graph theoretic properties of r- and (r,s)-robustness. These algorithms guarantee consensus of normally behaving agents in the presence of a bounded number of arbitrarily misbehaving agents if the values of the integers r and s are sufficiently high. However, determining the largest integer r for which an arbitrary digraph is r-robust is highly nontrivial. This paper introduces a novel method for calculating this value using zero-one integer programming. The method only requires knowledge of the graph Laplacian matrix, and can be formulated with affine objective and constraints, except for the integer constraint. Integer programming methods such as branch-and-bound can allow both lower and upper bounds on r to be iteratively tightened. Simulations suggest the proposed method demonstrates greater efficiency than prior algorithms. 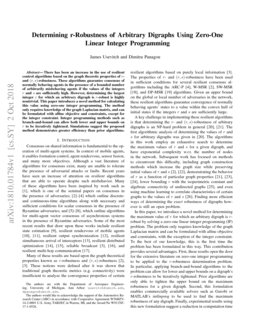 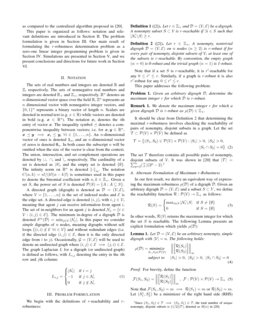 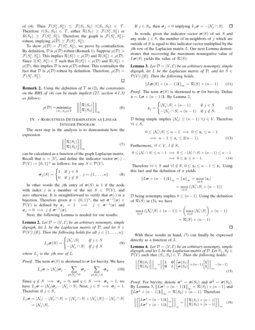 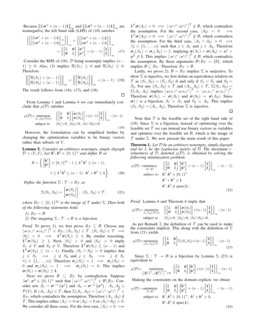 Consensus on shared information is fundamental to the operation of multi-agent systems. In context of mobile agents, it enables formation control, agent rendezvous, sensor fusion, and many more objectives. Although a vast literature of algorithms for consensus exist, many are unable to tolerate the presence of adversarial attacks or faults. Recent years have seen an increase of attention on resilient algorithms that are able to operate despite such misbehavior. Many of these algorithms have been inspired by work such as [1], which is one of the seminal papers on consensus in the presence of adversaries; [2, 3, 4] which outline discrete- and continuous-time algorithms along with necessary and sufficient conditions for scalar consensus in the presence of Byzantine adversaries; and [5, 6, 7, 8]

, which outline algorithms for multi-agent vector consensus of asynchronous systems in the presence of Byzantine adversaries. Some of the most recent results that draw upon these works include resilient state estimation

Many of these results are based upon the graph theoretical properties known as r-robustness and (r,s)-robustness [2, 3]. These notions were defined after it was shown that traditional graph theoretic metrics (e.g. connectivity) were insufficient to analyze the convergence properties of certain resilient algorithms based on purely local information [3]. The properties of r- and (r,s)-robustness have been used in sufficient conditions for several resilient consensus algorithms including the ARC-P [4], W-MSR [2], SW-MSR [18], and DP-MSR [19] algorithms. Given an upper bound on the global or local number of adversaries in the network, these resilient algorithms guarantee convergence of normally behaving agents’ states to a value within the convex hull of initial states if the integers r and s are sufficiently large.

A key challenge in implementing these resilient algorithms is that determining the r- and (r,s)-robustness of arbitrary digraphs is an NP-hard problem in general [20, 21]. The first algorithmic analysis of determining the values of r and s for arbitrary digraphs was given in [20]. The algorithms in this work employ an exhaustive search to determine the maximum values of r and s for a given digraph, and have exponential complexity w.r.t. the number of nodes in the network. Subsequent work has focused on methods to circumvent this difficulty, including graph construction methods which increase the graph size while preserving initial values of r and s [2, 22], demonstrating the behavior of r as a function of particular graph properties [21, 23, 24], lower bounding r with the isoperimetric constant and algebraic connectivity of undirected graphs [25]

, and even using machine learning to correlate characteristics of certain graphs to the values of

r and s [26]. Finding more efficient ways of determining the exact robustness of digraphs however is still an open problem.

In this paper, we introduce a novel method for determining the maximum value of r for which an arbitrary digraph is r-robust by solving a zero-one linear integer programming (IP) problem. The problem only requires knowledge of the graph Laplacian matrix and can be formulated with affine objective and constraints, with the exception of the integer constraint. To the best of our knowledge, this is the first time the problem has been formulated in this way. This contribution provides several advantages. First, these results open the door for the extensive literature on zero-one integer programming to be applied to the r-robustness determination problem. In particular, applying branch-and-bound algorithms to the problem can allow for lower and upper bounds on a digraph’s r-robustness to be iteratively tightened. Prior algorithms are only able to tighten the upper bound on the maximum robustness for a given digraph. Second, this formulation enables commercially available solvers such as Gurobi or MATLAB’s intlinprog to be used to find the maximum robustness of any digraph. Finally, experimental results using this new formulation suggest a reduction in computation time as compared to the centralized algorithm proposed in [20].

A directed graph (digraph) is denoted as D=(V,E), where V={1,…,n} is the set of indexed nodes and E is the edge set. A directed edge is denoted (i,j), with i,j∈V, meaning that agent j can receive information from agent i. The set of in-neighbors for an agent j is denoted Nj={i∈V:(i,j)∈E}. The minimum in-degree of a digraph D is denoted δin(D)=minj∈V|Nj|. In this paper we consider simple digraphs of n nodes, meaning digraphs without self loops ((i,i)∉E ∀i∈V) and without redundant edges (i.e. if the directed edge (i,j)∈E, then it is the only directed edge from i to j). Occasionally, G=(V,E) will be used to denote an undirected graph where (i,j)∈E⟹(j,i)∈E. The graph Laplacian L for a digraph (or undirected graph) is defined as follows, with Li,j denoting the entry in the ith row and jth column:

Let r∈Z+. A nonempty, nontrivial digraph D=(V,E) on n nodes (n≥2) is r-robust if for every pair of nonempty, disjoint subsets of V, at least one of the subsets is r-reachable. By convention, the empty graph (n=0) is 0-robust and the trivial graph (n=1) is 1-robust.

This paper addresses the following problem:

Given an arbitrary digraph D, determine the maximum integer r for which D is r-robust.

We denote the maximum integer r for which a given digraph D is r-robust as ρ(D)∈Z+.

It should be clear from Definition 2 that determining the maximal r-robustness involves checking the reachability of pairs of nonempty, disjoint subsets in a graph. Let the set T⊂P(V)×P(V) be defined as

In our first result, we derive an equivalent way of expressing the maximum robustness ρ(D) of a digraph D. Given an arbitrary digraph D=(V,E) and a subset S⊂V, we define the reachability function R:P(V)→Z+ as follows:

In other words, R(S) returns the maximum integer for which the set S is reachable. The following Lemma presents an explicit formulation which yields ρ(D):

Let D=(V,E) be an arbitrary nonempty, simple digraph with |V|=n. The following holds:

For brevity, define the function

can be calculated as a function of the graph Laplacian matrix. Recall that n=|V|, and define the indicator vector σ(⋅):P(V)→{0,1}n as follows: for any S∈P(V),

Next, the following Lemma is needed for our results:

where Lj is the jth row of L.

The term σ(S) is shortened to σ for brevity. We have

In words, given the indicator vector σ(S) of set S and any node j∈S, the number of in-neighbors of j which are outside of S is equal to this indicator vector multiplied by the jth row of the Laplacian matrix L. Our next Lemma demonstrates that recovering the maximum nonnegative value of Lσ(S) yields the value of R(S):

Let D=(V,E) be an arbitrary nonempty, simple digraph, let L be the Laplacian matrix of D, and let S∈P(V)∖{∅}. Then the following holds:

With these results in hand, (7) can finally be expressed directly as a function of L.

Let D=(V,E) be an arbitrary nonempty, simple digraph, and let L be the Laplacian matrix of D. Let S1,S2∈P(V) such that (S1,S2)∈T. Then the following holds:

However, the formulation can be simplified further by changing the optimization variables to be binary vectors rather than subsets of V.

Define the function Σ:T→RT as

where RT⊂{0,1}2n is the image of T under Σ. Then both of the following statements hold:

Let D be an arbitrary nonempty, simple digraph and let L be the Laplacian matrix of D. The maximum r-robustness of D, denoted ρ(D), is obtained by solving the following minimization problem:

Lemma 4 and Theorem 4 imply that

Making the constraints on the domain explicit, we obtain

This minimization problem can actually be reformulated to an linear integer programming problem (IP) where the objective and all constraint functions are affine except for the integer constraint. This is shown in the following corollary:

Let D be an arbitrary nonempty, simple digraph, and let L be the Laplacian matrix of D. The maximum r-robustness of D, denoted ρ(D), is obtained by solving the following linear integer program:

First, it can be demonstrated [27] that the formulation minimizex∥x∥∞ is equivalent to

Since r-robustness is equivalent to (r,1)-robustness,222See section VII-B of [2]. the solution to the optimization problem in Theorem 1 determines the maximum r for which the graph is (r,1)-robust. As per [2, 20], in general the parameter r has higher precedence than s when ordering a set of graphs by robustness. In addition, (r′+s′−1)-robustness implies (r′,s′)-robustness [28],333E.g. a graph which is (2F+1)-robust for a nonnegative integer F is therefore (F+1,F+1)-robust. and so a certain degree of (r,s)-robustness can be inferred from knowing the maximum value of r.

When comparing the optimization problem in Theorem 1 with the algorithms in [20], it is important to note that those in [20] determine both of the parameters r and s for which graphs are (r,s)-robust. Since the method in Theorem 1 only determines the largest r for which a digraph is (r,1)-robust (with s fixed at 1), it cannot be directly compared to Algorithm 3.2, DetermineRobustness(A(D)) in [20]. However, by replacing each initialization s←n in DetermineRobustness with the initialization s←1, a modified algorithm is obtained which only determines (r,1)-robustness and can be directly compared with the method in Theorem 1. This modified algorithm is presented as Algorithm 1. In addition, the initialization condition r←min(δin(D),⌈n/2⌉) in DetermineRobustness

incorrectly classifies some rooted outbranchings as 0-robust (those with in-degree of the root being 0), when they are actually 1-robust (see Lemma 7 of

[2]). We have revised the initialization of r accordingly. The reader is referred to [20] for the definition of the function Robustholds(A,S1,S2,r,s). In short, the function returns the boolean true if the number of r-reachable nodes from S1 and S2 is at least s, and false otherwise.