The bioinformatical methods to detect lateral gene transfer events are mainly based on functional coding DNA characteristics. In this paper, we propose the use of DNA traits not depending on protein coding requirements. We introduce several semilocal variables that depend on DNA primary sequence and that reflect thermodynamic as well as physico-chemical magnitudes that are able to tell apart the genome of different organisms. After combining these variables in a neural classificator, we obtain results whose power of resolution go as far as to detect the exchange of genomic material between bacteria that are phylogenetically close. 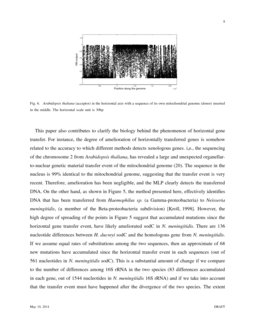 An image representation based convolutional network for DNA classification

On Coding for an Abstracted Nanopore Channel for DNA Storage

In the emerging field of DNA storage, data is encoded as DNA sequences a...
Reyna Hulett, et al. ∙

Did Sequence Dependent Geometry Influence the Evolution of the Genetic Code?

The genetic code is the function from the set of codons to the set of am...
Alex Kasman, et al. ∙

Mechanism of Evolution Shared by Gene and Language

We propose a general mechanism for evolution to explain the diversity of...
Li-Min Wang, et al. ∙

An ideal signature material and method, which can be used to prove the a...
Yixin Zhang, et al. ∙

There is a general agreement that horizontal gene transfer (HGT) is important in genome evolution. To which degree is still a matter of debate. The discussion oscillates between two extreme positions: first, the idea that the rate of transfer and its impact are of such a magnitude as to be the “essence of phylogeny” -at least for Prokaryotic organisms [Doolittle, 1999] and, on the other hand, the researchers who opine that the role of HGT in evolution has been overestimated [Kurland et al., 2003]

and that, while a matter of interest, it is not relevant when compared to other causes of genomic evolution like paralog duplication and secondary gene looses. Most probably, the real weight of HGT in evolution is posed somewhere between these extremes. Independently of the outcome of the discussion, there is a general agreement that it is relevant to detect events of HGT.

Deviant composition methods are based on the different phenotypic characteristics among divergent genomes. They are mainly focused on bias in GC contents or codon usage [Mrazek and Karlin, 1999] and bias in the nucleotide composition in the third and first codon position [Lawrence and Ochman, 1997]. Deviant genes might exist for reasons other than HGT, and only recently transferred genes would be detected by this method [Eisen, 2000, Hooper and Berg, 2002]. Also, this group of methods normally does not detect transferred genes from phenotypically similar genomes.

Abnormal sequence similarity is based on the assumption of overall similarity as a measure of phylogenetic relatedness. Usually, BLAST searches (or other similar algorithms) are used to detect sequences in one genome more similar to sequences in divergent genomes than those sequences found in phylogenetic closer genomes (the phylogenetic relationships between genomes are set prior the analysis according to some other criterion like rRNA phylogeny). While these methods work fast, they are not fully reliable because the similarity between a gene in two different species can be explained by a number of phenomenons besides HGT. For instance, evolutionary rate variation can lead to misleading results in the identification of HGT genes, both as false positives and false negatives [Eisen, 2000].

Phylogenetic analysis is often considered to be perhaps the best way to investigate the occurrence of HGT because it remains the only one to reliably infer historical events from gene sequences [Eisen, 2000]; Accordingly, incongruent phylogenetic trees between different families of genes will be caused by HGT; however conflicting phylogenies can be a result of either artifacts of phylogenetic reconstruction, HGT or unrecognized paralogy [Zhaxybayeva et al., 2004].

In this study, we propose a method that does not depend on DNA functional traits and due to this reason is no longer correct to say that it detects HGT because it might also detect transfer of non-coding DNA (ncDNA). From now on, we will refer to horizontal genetic material transfer (HGMT). We use eight variables that can be measured over a set of windows covering whole genomes and combine them with an Artificial Neural Network (NN). The field of using DNA measurables other than those derived from protein coding requirements have been largely ignored. Up to our knowledge, there are no methods based exclusively on structural DNA traits to detect neither HGT or HGMT events.

Our approach was to take a pair of DNA sequences –genomes in case of prokaryotes, chromosomes for eukaryotes-, the first one is the donor genome and the second one the acceptor. The data were taken from Genbank release 24.

To calculate the variables that characterize locally the DNA sequences, a window is placed over the chromosomes (Figure 1). The window can slide over the sequences or can be put randomly (see below).

We used a ”classic NN approach” –a backpropragation multilayer perceptron (MLP), very similar to the model reported by Uberbacher

The novelty and main contribution of this paper is the set of measurables we use to evaluate a DNA sequence. Following the nomenclature of Uberbacher we will call them sensors.

For the training stage of the MLP A window of fixed length (300bp unless otherwise stated) was placed repeatedly over both genomes at random independent positions and every time eight sensors were evaluated over the subsequence in the window and were used feed and train a MLP with binary output; ′0′ corresponding to acceptor DNA sequences and ′1′ to donor ones. For the prediction stage the window was allowed to slide along the acceptor sequence and a plot of its position against the outcome was obtained.

Ii-a Definition of the sensors

We worked with a total of eight sensors divided in three groups. The first one includes traditional measures of DNA variance, the second reflects the DNA local correlations structure and the third one is a measure of the DNA spatial structure according to the dinucleotide distribution:

E. coli (donor) inserted in silico in a mouse (Mus musculus) chromosome (acceptor). To this end, a set of 20000 fragments of length 300 of both genomes was picked up randomly to train the MLP. The network configuration 8-5-1 yielded the results shown in Figure 3. With a 300bp sliding window and an overlap of 30bp the response of the MLP is steadily ′0′ while the sliding window travel across the acceptor chromosome and then jumps to ′1′ when it enters the donor insertion and goes back to ′0′ for the rest of the acceptor sequence.

Once the MLP was well tuned, we carried out three case studies:

In this paper we show the feasibility of using variables not related to the DNA function as measurables that can be used to detect horizontal exchange of genetic material between different species. The results are very good and encourage the further development of this line of research. It is a matter of future work to build on a complete set of variables with the minimum size but having the maximum power of resolution.

This paper also contributes to clarify the biology behind the phenomenon of horizontal gene transfer. For instance, the degree of amelioration of horizontally transferred genes is somehow related to the accuracy to which different methods detects xenologous genes. i,e., the sequencing of the chromosome 2 from Arabidopsis thaliana, has revealed a large and unexpected organellar-to-nuclear genetic material transfer event of the mitochondrial genome (20). The sequence in the nucleus is 99% identical to the mitochondrial genome, suggesting that the transfer event is very recent. Therefore, amelioration has been negligible, and the MLP clearly detects the transferred DNA. On the other hand, as shown in Figure 5, the method presented here, effectively identifies DNA that has been transferred from Haemophilus sp. (a Gamma-proteobacteria) to Neisseria meningitidis, (a member of the Beta-proteobacteria subdivision) [Kroll, 1998]. However, the high degree of spreading of the points in Figure 5 suggest that accumulated mutations since the horizontal gene transfer event, have likely ameliorated sodC in N. meningitidis. There are 136 nucleotide differences between H. ducreyi sodC and the homologous gene from N. meningitidis. If we assume equal rates of substitutions among the two sequences, then an approximate of 68 new mutations have accumulated since the horizontal transfer event in each sequences (out of 561 nucleotides in N. meningitidis sodC). This is a substantial amount of change if we compare to the number of differences among 16S rRNA in the two species (83 differences accumulated in each gene, out of 1544 nucleotides in N. meningitidis 16S rRNA) and if we take into account that the transfer event must have happened after the divergence of the two species. The extent to which the NN can go in detection when amelioration occurs will be reported elsewhere.

This research was partially supported by PAPIIT-UNAM grant IN115908. The investigation is part of Citlali’s B.Sc. dissertation in Computer Science at UNAM.