Polar codes are designed for parallel binary-input additive white Gaussian noise (BiAWGN) channels with an average power constraint. The two main design choices are: the mapping between codeword bits and channels of different quality, and the power allocation under the average power constraint. Information theory suggests to allocate power such that the sum of mutual information (MI) terms is maximized. However, a power allocation specific to polar codes shows significant gains. 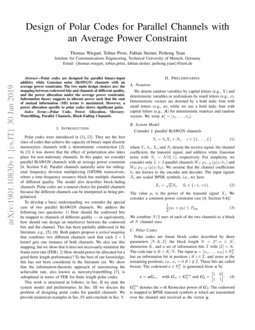 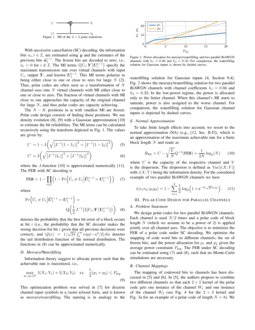 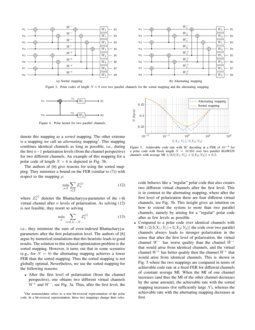 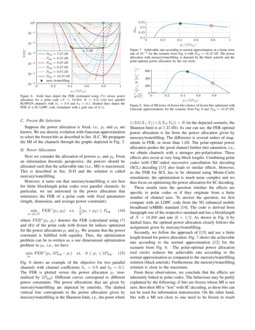 Bhattacharyya parameter of monomials codes for the Binary Erasure Channel: from pointwise to average reliability

Turbo Autoencoder with a Trainable Interleaver

Polar codes were introduced in [1, 2]. They are the first class of codes that achieve the capacity of binary input discrete memoryless channels with a deterministic construction [2]. In [3] it was shown that the effect of polarization also takes place for non-stationary channels. In this paper, we consider parallel BiAWGN channels with an average power constraint [4, Section 9.4]. Parallel channels naturally arise for OFDM (OFDM) transceivers, where a time-frequency resource block has multiple channels of different quality. The model also describes block-fading channels. Polar codes are a natural choice for parallel channels because the different channels can be interpreted as being pre-polarized.

To develop a basic understanding, we consider the special case of two parallel BiAWGN channels. We address the following two questions: 1) How should the codeword bits be mapped to channels of different quality — or equivalently, how should one design an interleaver between the codeword bits and the channel. This has been partially addressed in the literature, e.g., [5, 6]. Both papers propose a sorted mapping that combines two different channels such that each 2×2 kernel gets one instance of both channels. We also use this mapping, but we show that it does not necessarily minimize the FER (FER). 2) How should power be allocated for a good finite length performance? To the best of our knowledge, this has not been considered in the literature yet. We show that the information-theoretic approach of maximizing the achievable rate, also known as mercury/waterfilling [7], is suboptimal in terms of FER for finite length polar codes.

This work is structured as follows: in Sec. II we state the system model and preliminaries. In Sec. III we discuss the problem of designing polar codes for parallel channels. We provide numerical examples in Sec. IV and conclude in Sec. V.

). Deterministic vectors are denoted by a bold italic font with small letters (e.g.,

x), while we use a bold italic font with capital letters (e.g., A) for deterministic matrices and random vectors. We write xji=[xi,…,xj].

where Yi, hi, Xi, and Ni denote the receive signal, the channel coefficient, the transmit signal, and additive white Gaussian noise with Ni∼N(0,1), respectively. For simplicity, we consider only L=2 parallel channels W1:\pp[Y|X][y|x;h1] and W2:\pp[Y|X][y|x;h2]. We assume that the channel coefficients hi are known to the encoder and decoder. The input signals Xi are scaled BPSK symbols, i.e., we have

The value pi is the power of the transmit signal Xi. We consider a common power constraint (see [4, Section 9.4])

We combine N/2 uses of each of the two channels to a block of N channel uses.

Polar codes are linear block codes described by three parameters [N,K,I]: the block length N=2n,n∈N, dimension K, and a set of information bits I with |I|=K. The code rate is R=K/N. The input u=[u1,…,uN]∈FN2 has an information bit at position i if i∈I, and zeros at the remaining positions, i.e., ui=0 if i∉I. These bits are called frozen. The codeword c∈FN2 is generated from u by

G⊗n2 denotes the n-th Kronecker power of G2. The codeword is mapped to BPSK transmit symbols x which are transmitted over the channel and received as the vector y.

The N−K positions in u with smallest MI are frozen. Polar code design consists of finding these positions. We use density evolution [8, 9] with a Gaussian approximation [10] to estimate the bit reliabilities.

The MI terms can be calculated recursively using the transform depicted in Fig. 1. The values are given by:

where the J-function [10] is approximated numerically [11]. The FER with SC decoding is

i (i.e., the probability that the SC decoder makes the wrong decision for bit i given that all previous decisions were correct), and Q(x)=1/√2π∫∞xexp(−u2/2)du

8) can be approximated numerically.

Information theory suggest to allocate power such that the achievable rate is maximized, i.e.,

This optimization problem was solved in [7] for discrete channel input symbols in a (semi-)closed form, and is known as mercury/waterfilling. The naming is in analogy to the waterfilling solution for Gaussian inputs [4, Section 9.4].

Fig. 2 shows the mercury/waterfilling solution for two parallel BiAWGN channels with channel coefficients h1=0.66 and h2=0.33. In the low-power regime, the power is allocated only to the better channel. When this channel’s MI starts to saturate, power is also assigned to the worse channel. For comparison, the waterfilling solution for Gaussian channel inputs is depicted by dashed curves.

To take finite length effects into account, we resort to the NA (NA) (e.g., [12, Sec. II-F]), which is an approximation of the maximum achievable rate for a finite block length N and reads as

where C is the capacity of the respective channel and V is the dispersion. The dispersion is defined as \Vari(X;Y) with i(X;Y) being the information density. For the considered example of two parallel BiAWGN channels we have

We design polar codes for two parallel BiAWGN channels. Each channel is used N/2 times and a polar code of block length N (which we assume to be a power of 2) is applied jointly over all channel uses. The objective is to minimize the FER of a polar code under SC decoding. We optimize the mapping of code word bits to different channels, the set of frozen bits, and the power allocation for p1 and p2 given the average power constraint Pavg. The FER under SC decoding can be estimated using (7) and (8), such that no Monte-Carlo simulations are necessary.

The mapping of codeword bits to channels has been discussed in [5] and [6]. In [5], the authors propose to combine two different channels so that each 2×2 kernel of the polar code gets one instance of the channel W1 and one instance of the channel W2 (see Fig. 4 for the 2×2 kernel and Fig. (a)a for an example of a polar code of length N=8). We denote this mapping as a sorted mapping. The other extreme is a mapping we call an alternating mapping111Our nomenclature refers to a non bit-reversal representation of the polar code. In a bit-reversal representation, these two mappings change their roles.. This mapping combines identical channels as long as possible, i.e., during the first n−1 polarization levels (from the channel perspective) for two different channels. An example of this mapping for a polar code of length N=8 is depicted in Fig. (b)b.

The authors of [6] give reasons for using the sorted mapping. They minimize a bound on the FER (similar to (7)) with respect to the mapping ρ:

where Z(i)n denotes the Bhattacharyya-parameter of the i-th virtual channel after n levels of polarization. As solving (12) is not feasible, they resort to solving

i.e., they minimize the sum of even-indexed Bhattacharyya-parameters after the first polarization level. The authors of [6]

argue by numerical simulations that this heuristic leads to good results. The solution to this relaxed optimization problem is the sorted mapping. However, it turns out that in some scenarios (e.g., for

Suppose the power allocation is fixed, i.e., p1 and p2 are known. We use density evolution with Gaussian approximation to select the frozen bits as described in Sec. II-C. We propagate the MI of the channels through the graphs depicted in Fig. 3.

Next we consider the allocation of powers p1 and p2. From an information theoretic perspective, the powers should be allocated such that the achievable rate (i.e., MI) is maximized. This is described in Sec. II-D and the solution is called mercury/waterfilling.

However, it turns out that mercury/waterfilling is not best for finite blocklength polar codes over parallel channels. In particular, we are interested in the power allocation that minimizes the FER of a polar code with fixed parameters (length, dimension, and average power constraint):

where FER∗(p1,p2) denotes the FER (calculated using (7) and (8)) of the polar code with frozen bit indices optimized for the power allocations p1 and p2. We assume that the power constraint is fulfilled with equality. Thus, the optimization problem can be re-written as a one dimensional optimization problem in p1, i.e., we have

Fig. 6 shows an example of the objective for two parallel channels with channel coefficients h1=0.9 and h2=0.1. The FER is plotted versus the power allocation p1 (normalized by 2Pavg). Different curves correspond to different power constraints.

These results raise the question whether the effects are specific to polar codes or if they originate from a finite number of channel uses. To answer the question, we first compare with an LDPC code from the 5G eMBB (eMBB) standard [14]. The code is derived from basegraph one of the respective standard and has a blocklength of N=$16200$ and rate R=1/2. As shown in Fig. 6 by dashed lines, the optimal power allocation closely follows the assignment given by mercury/waterfilling.

Secondly, we follow the approach of [15] and use a finite length bound for power allocation. Fig. 7 shows the achievable rate according to the normal approximation [12] for the scenario from Fig. 6.

From these observations, we conclude that the effects are inherently linked to polar codes. The behaviour may be partly explained by the following: if bits are frozen whose MI is not zero, then their MI is “lost” with SC decoding, as these bits can not be used for information transmission. On the other hand, bits with a MI not close to one need to be frozen to reach a feasible FER. Fig. 8 depicts this rate loss for the scenario from Fig. 6 with Pavg=$10.37dB$. The rate loss with the polar optimal power allocation (red circle) is less than half of the rate loss with mercury/waterfilling (black asterisk). Thus, the polar-optimal power allocation is a tradeoff between rate loss (in terms of achievable rate) by sub-optimal power allocation and rate loss by imperfect polarization. Instead of minimizing the frame error rate one could also maximize the achievable rate of the unfrozen bits, i.e., the rate

This leads to almost the same results as optimizing the FER (14), and brings the power allocation for polar codes back into an information theoretic framework.

We proposed a novel approach to allocate power for polar codes over parallel channels with an average power constraint. We showed significant gains in terms of FER as compared to power allocation by mercury/waterfilling. We elaborated on the design of polar codes for parallel channels and the mapping between codeword bits and channels of different quality. Future work involves a study of more than two parallel channels, including the design of the mapping between codeword bits and channels. A further research topic is the power allocation for polar codes with higher order modulation, e.g., using multi-level coding [16, 17].