Massive power-law graphs drive many fields: metagenomics, brain mapping, Internet-of-things, cybersecurity, and sparse machine learning. The development of novel algorithms and systems to process these data requires the design, generation, and validation of enormous graphs with exactly known properties. Such graphs accelerate the proper testing of new algorithms and systems and are a prerequisite for success on real applications. Many random graph generators currently exist that require realizing a graph in order to know its exact properties: number of vertices, number of edges, degree distribution, and number of triangles. Designing graphs using these random graph generators is a time-consuming trial-and-error process. This paper presents a novel approach that uses Kronecker products to allow the exact computation of graph properties prior to graph generation. In addition, when a real graph is desired, it can be generated quickly in memory on a parallel computer with no-interprocessor communication. To test this approach, graphs with 10^12 edges are generated on a 40,000+ core supercomputer in 1 second and exactly agree with those predicted by the theory. In addition, to demonstrate the extensibility of this approach, decetta-scale graphs with up to 10^30 edges are simulated in a few minutes on a laptop. 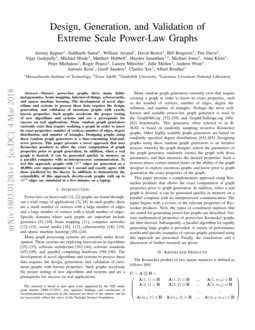 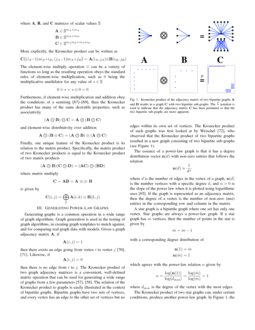 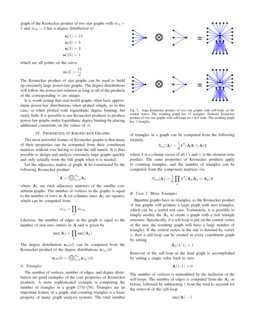 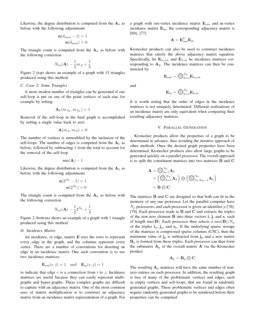 Some Combinatorial Problems in Power-law Graphs

The power-law behavior is ubiquitous in a majority of real-world network...
Jiang Che, et al. ∙

The k-Power Domination Number in Some Self-Similar Graphs

The k-power domination problem is a problem in graph theory, which has a...
Yulun Xu, et al. ∙

This paper presents the development of a new class of algorithms that ac...
Giorgos Stamatelatos, et al. ∙

Towards a property graph generator for benchmarking

The use of synthetic graph generators is a common practice among graph-o...
Arnau Prat-Pérez, et al. ∙

††footnotetext: This material is based in part upon work supported by the NSF under grant number DMS-1312831. Any opinions, findings, and conclusions or recommendations expressed in this material are those of the authors and do not necessarily reflect the views of the National Science Foundation.

This paper presents a complementary approach using Kronecker products that allows the exact computation of graph properties prior to graph generation. In addition, when a real graph is desired, it can be generated quickly in memory on a parallel computer with no interprocessor communication. The paper begins with a review of the relevant properties of Kronecker products. Next, the types of constituent matrices that are suited for generating power-law graphs are described. Various mathematical properties of power-law Kronecker graphs are then derived. Subsequently, a parallel algorithm for rapidly generating large graphs is provided. A variety of performance results and specific examples of various graphs generated using this approach are presented. Finally, the conclusions and a discussion of further research are given.

where A, B, and C matrices of scalar values S

More explicitly, the Kronecker product can be written as

Furthermore, if element-wise multiplication and addition obey the conditions of a semiring [67, 68, 69], then the Kronecker product has many of the same desirable properties, such as associativity

and element-wise distributivity over addition

then there exists an edge going from vertex i to vertex j [70, 71]. Likewise, if

n(d) with non-zero entries that follows the relation

where d is the number of edges in the vertex of a graph, n(d) is the number vertices with a specific degree d, and α>0 is the slope of the power law when it is plotted using logarithmic axes [65]. If the graph is represented as an adjacency matrix, then the degree of a vertex is the number of non-zero (nnz) entries in the corresponding row and column in the matrix.

A star graph is a bipartite graph where one set has only one vertex. Star graphs are always a power-law graph. If a star graph has m vertices, then the number of points in the star is given by

with a corresponding degree distribution of

which agrees with the power-law relation α given by

where dmax is the degree of the vertex with the most edges.

which are all points on the curve

The Kronecker product of star graphs can be used to build up extremely large power-law graphs. The degree distributions will follow the power-law relation as long as all of the products of the corresponding ^m are unique.

It is worth noting that real-world graphs often have approximate power-law distributions when plotted simply, as in this case, or when plotted with logarithmic degree binning, but rarely both. It is possible to use Kronecker products to produce power-law graphs under logarithmic degree binning by placing additional constraints on the values of ^m.

The most powerful feature of Kronecker graphs is that many of their properties can be computed from their constituent matrices without ever having to form the full matrix. It is thus possible to design and analyze extremely large graphs quickly and only actually form the full graph when it is needed.

where Ak are each adjacency matrices of the smaller constituent graphs. The number of vertices in the graphs is equal to the number of rows in A (or columns since Ak are square), which can be computed from

where 1 is a column vector of all 1’s and ⊗ is the element-wise product. The same properties of Kronecker products apply to counting triangles, and the number of triangles can be computed from the component matrices via

Bipartite graphs have no triangles, so the Kronecker product of star graphs will produce a large graph with zero triangles, which can be a useful test case. Fortunately, it is possible to simply modify the Ak to create a graph with a rich triangle structure. Specifically, if a self-loop is put on the central vertex of the star, the resulting graph will have a large number of triangles. If the central vertex in the star is denoted by vertex 1, then a self-loop can be created in every constituent graph by setting

Likewise, the degree distribution is computed from the Ak as before with the following adjustments

Figure 2 (top) shows an example of a graph with 15 triangles produced using this method.

A more modest number of triangles can be generated if one self-loop is put on one of the point vertices of each star, for example by setting

Likewise, the degree distribution is computed from the Ak as before with the following adjustments

Figure 2 (bottom) shows an example of a graph with 1 triangle produced using this method.

It is worth noting that the order of edges in the incidence matrices is not uniquely determined. Different realizations of an incidence matrix are only equivalent when comparing their resulting adjacency matrices.

The matrices B and C are designed so that both can fit in the memory of any one processor. Let the parallel computer have Np processors, and each processor is given an identifier p [78, 79]. Each processor reads in B and C and extracts the triples of the non-zero element B into three vectors i, j, and s, each of length nnz(B). Each processor then selects a nnz(B)/Np of the triples ip, jp, and sp. If the underlying sparse storage of the matrices is compressed sparse columns (CSC), then the minimum value of jp is subtracted from jp and a new matrix Bp is formed from these triples. Each processor can then form the submatrix Ap of the overall matrix A via the Kronecker product

Emerging data in metagenomics, brain mapping, Internet-of-things, cybersecurity, and sparse machine learning produce massive power-law graphs and are driving the development of novel algorithms and systems to process these data. The scale and distribution of these data makes validation of graph processing systems a significant challenge. The ability to create enormous graphs with exactly known properties can significantly accelerate the design, generation, and validation of new graph processing systems. Many current graph generators produce random graphs whose exact properties, such as number of vertices, number of edges, degree distribution, and number of triangles, can only be computed after the graph has been generated. Thus, designing graphs using these random graph generators is a time-consuming trial-and-error process.

Kronecker products of the adjacency matrices of star graphs are a powerful way to create large power-law graphs. The properties of Kronecker products allow many properties of a larger graph to be computed by simply combining the corresponding properties of the constituent matrices. The ability to compute the properties of large graphs using only small graphs allows the graph designer to find these prior to creating the actual graph. Furthermore, real graphs can be created using Kronecker products on a parallel computer with no interprocessor communication. The resulting graphs will have the same number of edges on each processor. In addition, the graph avoids many of the difficulties, such as empty vertices and self-loops, that are found in other graph generators that rely random sampling. These problematic vertices and edges often require randomly generated graphs to be reindexed before their properties can be computed.

To test this approach, graphs with 1012 edges are generated on a 40,000+ core supercomputer in 1 second and exactly agree with those predicted by the theory. In addition, in order to demonstrate the extensibility of this approach, decetta-scale graphs with up to 1030 edges are simulated in a few minutes on laptop. These results indicate that the proposed method can be a powerful tool for enabling the design, generation, and validation of new graph processing systems.

This paper has presented formulas for a number of properties of Kronecker graphs. There are many additional properties that could be computed in future research, such as eigenvectors, iso-parametric ratios, betweenness centrality, and triangle enumeration. The parallel Kronecker graph generator is ideally suited to the GraphBLAS.org software standard and the creation of a high performance version using this standard is a future goal. Finally, the ability to reason about graphs that are beyond any current or planned computer opens up new possibilities for the theoretical study of phenomena on these large graphs.