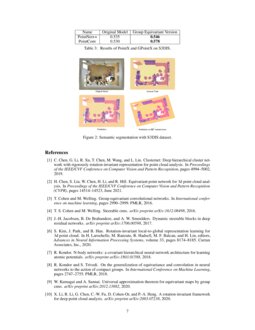 On the Universality of Rotation Equivariant Point Cloud Networks

Symmetries and equivariance are fundamental to the generalization of neu...
Marc Finzi, et al. ∙

Instance segmentation in point clouds is one of the most fine-grained wa...
Guangnan Wu, et al. ∙

The unprecedented development in 3D acquisition technologies has led to the widely affordable of 3D sensors such as LiDARs, and RGB-D cameras, which directly output data termed Point Cloud. Theoretically, this data can provide rich information in terms of geometric, shape, and scale. However, in practice, capturing the same object from different locations or angles produces different data. Consequently, inducing equivariance under transformations such as permutation, translation and rotation in deep neural network architectures is crucial to improving generalization when dealing with 3D point clouds.

This work seeks to improve generalization and data efficiency of neural networks for 3D point clouds through group equivariance since processing raw point cloud directly can eliminate redundant computation and memory required. In particular, we propose a general procedure, called G-PointX, to introduce group equivariant to an existing SOTA backbone which is not equivariant yet. The main idea of the procedure is inherited by the symmetricization technique, called Reynolds operator (see sturmfels2008algorithms ). For practical applications, we apply this procedure to two typical backbones which are PointNet++ and PointConv to obtain efficient group equivariant models for 3D point clouds that we term G-PointNet and G-PointConv, respectively.

We demonstrate the effectiveness of G-PointX through extensive empirical experiments. For the classification benchmark, G-PointX outperforms state-of-the-art deep neural networks for 3D point clouds when dealing with rotated data. For semantic segmentation benchmark, G-PointX outperforms original models by a significant margin. In short, the main contribution of this paper are:

extracted features by simply employing a combination of MLPs and max-pooling. PointNet++

qi2017pointnet++ , afterwards, introduces a new architecture called hierarchical structure which efficiently aggregated information from local area. Notably, PointNet++ used PointNet operation to extract feature, which could be considered as MLP operation for point cloud. Later papers inspired by PointNet++ often keep the hierarchical structure as the same and only modify the operation. Typically, PointConvwu2019pointconv replaced MLPs with Convolution layers and PointTransformerzhao2021point used self-attention operation to collect information in local region. As only relied on relative position and color, PointNet++, PointConvwu2019pointconv and PointTransformerzhao2021point are equivariant with translation and permutation.

Group equivariant neural networks: There are several methods tried to embed group equivariant properties into the architecture. For example, the patch-wise 360o-rotation equivariance in Harmonic Networks worrall2017harmonic was obtained by using circular harmonics. Moreover, cohen2016steerable and jacobsen2017dynamic proposed blocks named Steerable CNNs, which can be equivariant to group SO(3) of 3D rotations. This type of block, then, applied on capsule networks sabour2017dynamic and with N-body networks kondor2018n . The notions of equivariance and convolution were also generalized in neural networks to the action of compact groups in kondor2018generalization . Apart from that, some further abstract setting and universality results on group equivariance are described in kumagai2020universal ; maron2019universality ; petersen2020equivalence ; ravanbakhsh2020universal ; yarotsky2018universal .

Our work stands out from other approaches: The method we use in G-PointX is different from the previous group equivariant models. Rather than design new representation or architecture, we provide a plug-in to existing models, which allows us to inherit the advantages of the original model. In our method, we achieve group equivariance by applying the standard MLPs and CNNs, and re-arranging different group conjugations of the operations in a suitable way.

Let G be a group with identity 1 and V a nonempty set. An action of G to V is a map G×V→V defined by a certain operation (g,v)↦gv satisfying the properties 1v=v and

Now we consider a 3D point cloud as a function from a finite set P⊂R3 to Rd, where d is the dimension of the feature vectors. Sometimes, we extend the domain of this function from P to the whole R3 and view each point cloud as a continuous function (with compact support) from R3 to Rd in order to involve existing strong techniques in mathematics in developing suitable FFNNs for point clouds. A point cloud will be then identified with a function on C(P,Rd) or C(R3,Rd).

An FFNN is defined to be a sequence

σ. MLPs and CNNs are two types of operators that considered in this work, which are the most used FFNNs in practice.

Assume that G acts on R3. Then G also acts on functions on point clouds L=C(R3,Rd) as follows: for each g∈G and f∈L, the action gf∈L is defined by

Thanks to the point-wise structure, every nonlinear activation function is G-equivariant with respect to any group G (see cohen2016group ; kondor2018generalization

). However, not every linear transformation is

G-equivariant. Therefore, in the next section we give a natural approach to refine a given FFNN and produce an equivariant one. The notable PointNet++qi2017pointnet++ and PointConvwu2019pointconv layers with rotation groups G will be considered to illustrate the theory and to test the effectiveness of the proposed approach.

where q is the centroid, N(q) is the local neighbor of q and F is a local aggregration.

In this paper, we consider the aggregation methods in PointConv and PointNet++, whose formula can be written as:

4.2 A general framework for introducing equivariance

For the sake of simplicity, we choose G as a finite group. In case the transformation group is infinite, a finite subgroup is chosen. We will construct a neural networks of the form of a sequence of transformations

where ~F is a G-equivariant function built from a given local feature extraction F. In Eq. (2), we need to define what is the local area N((q,h)) around a point (q,h)∈P(l−1)×G. Different ways of choosing local neighbors will lead to different architectures. To simplify the formulation, we choose the local neighbor as

The algorithm for computing the output of Φ(l) can be separated into three steps as follows:

One can verify that

The group layer given in Algorithm 4.1 is equivariant with respect to transformations in the semigroup transitions in R3⋊G.

By applying the above algorithm to typical backbones using in practice PointNet++ and PointConv, we obtain G-PointNet++ and G-PointConv which can be described in detail as follows:

To evaluate the performance of our technique, we run experiments on two tasks which are classification using ModelNet40 dataset and semantic segmentation using S3DIS dataset. In particular, we initially compare our methods with other equivariant models on SO(3) rotated dataset to show the enhancement on both performance and complexity. Thereafter we do the ablation study which highlights the benefits of using our techniques, compared to solely employ rotation augmentation on original models. Additionally, the ablation study also provides the information about the performance of different group G. Eventually, we conduct experiments on semantic segmentation using the G equivariant models and the original ones.

5.1 GPointX versus other equivariant models

In this section we compares the performance of G-PointNet++ and G-PointConv with other equivariant models on SO(3) rotated ModelNet 40 dataset, which contains 13,834 mesh samples from 40 labels such as: table, chair, plane, plant, etc. Notably, the G group includes 24 rotation angles which consists of the combination of any ±π2 and ±π

rotations around the three axes. In terms of the experiment configuration, we reuse the same training pipeline of original models; number of points and number of epochs are 1024 and 200, respectively. However, to keep the memory required the same as original model, batch size is reduced to 8. Moreover, we also add

SO(3) rotation along with augmentations employed in the original paper. The results in Table 1 indicates that both GPointNet++ and GPointConv are outperforms other models in the literature.

We compare the accuracy of G-PointNet++ and G-PointConv for object classification on ModelNet40 when using different finite rotation groups G1, G4, G12 and G24. Here, Gn is a subgroup of SO(3) with n rotations. In particular, G4 contains the combinations of the π2 rotations around the z-axis. G12 contains the combination of the π3 rotations around the z-axis and the π rotations around the y-axis. Note that, when using G1, the Group Equivariant models are equivalent to original models. Table 2 shows that when we increase the elements in group G in the results of the model on SO(3) rotated dataset is also improved. Furthermore, this experiment also highlights the large enhancement of our group equivariant technique, compared to using solely rotation augmentation. To fairly compare the effect of the different groups, we fixed the batch size of all experiments equals to 8 and regarding the remaining parameters, we use the same configurations with the previous section.

Regarding semantic segmentation, S3DIS dataset was used to evaluate the performance of group equivariant and original models. This dataset contains contains 271 rooms and the objects are divided into 13 classes. Here, G is set to 8 instead of 24 since the objects in the rooms were mostly rotated around Oz. Similar to the previous section, we also fixed the batch size, epochs and number of points of the three models, which are 16, 32, and 4096 and the remaining parameter were kept as the same as the papers. As observed from Table 3, there is a significant improvement in terms of performance of PointConvwu2019pointconv when using our equivariant method.