Catalan words are particular growth-restricted words over the set of non-negative integers, and they represent still another combinatorial class counted by the Catalan numbers. We study the distribution of descents on the sets of Catalan words avoiding a pattern of length at most three: for each such a pattern p we provide a bivariate generating function where the coefficient of x^ny^k in its series expansion is the number of length n Catalan words with k descents and avoiding p. As a byproduct, we enumerate the set of Catalan words avoiding p, and we provide the popularity of descents on this set. Some of the obtained enumerating sequences are not yet recorded in the On-line Encyclopedia of Integer Sequences. 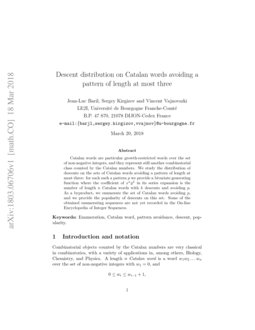 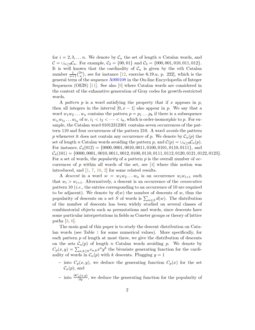 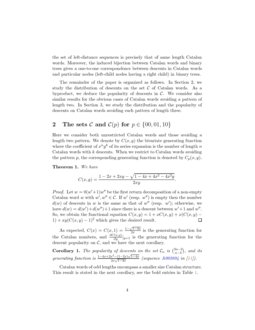 Combinatorial objects counted by the Catalan numbers are very classical in combinatorics, with a variety of applications in, among others, Biology, Chemistry, and Physics. A length n Catalan word is a word w1w2…wn over the set of non-negative integers with w1=0, and

A descent in a word w=w1w2…wn is an occurrence wiwi+1 such that wi>wi+1. Alternatively, a descent is an occurrence of the consecutive pattern 10 (i.e., the entries corresponding to an occurrence of 10 are required to be adjacent). We denote by d(w) the number of descents of w, thus the popularity of descents on a set S of words is ∑w∈Sd(w). The distribution of the number of descents has been widely studied on several classes of combinatorial objects such as permutations and words, since descents have some particular interpretations in fields as Coxeter groups or theory of lattice paths [3, 6].

The main goal of this paper is to study the descent distribution on Catalan words (see Table 1 for some numerical values). More specifically, for each pattern p of length at most three, we give the distribution of descents on the sets Cn(p) of length n Catalan words avoiding p. We denote by Cp(x,y)=∑n,k≥0cn,kxnyk the bivariate generating function for the cardinality of words in Cn(p) with k descents. Plugging y=1

From the definition at the beginning of this section it follows that a Catalan word is either the empty word, or it can uniquely be written as 0(w′+1)w′′, where w′ and w′′ are in turn Catalan words, and w′+1 is obtained from w′ by adding one to each of its entries. We call this recursive decomposition first return decomposition of a Catalan word, and it will be crucial in our further study. It follows that C(x), the generating function for the cardinality of Cn, satisfies:

which corresponds precisely to the sequence of Catalan numbers.

We conclude this section by explaining how Catalan words are naturally related to two classical combinatorial classes counted by the Catalan numbers.

A Dyck word is a word over {u,d} with the same number of u’s and d’s, and with the property that all of its prefixes contain no more d’s than u’s. Alternatively, a Dyck word can be represented as a lattice path starting at (0,0), ending at (2n,0), and never going below the x-axis, consisting of up steps u=(1,1) and down steps d=(1,−1). There is a direct bijection δ↦w between the set of Dyck words of semilength n and Cn: the Catalan word w is the sequence of the lowest ordinate of the up steps u in the Dyck word δ, in lattice path representation. For instance, the image through this bijection of the Dyck word uduuduudduuddd of semilength 7 is 0011212∈C7. Note that the above bijection gives a one-to-one correspondence between occurrences of the consecutive pattern ddu in Dyck words and descents in Catalan words.

In [8] the author introduced an integer sequence representation for binary trees, called left-distance sequence. For a binary tree T, let consider the following labeling of its nodes: the root is labeled by 0, a left child by the label of its parent, and a right child by the label of its parent, plus one. The left-distance sequence of T is obtained by covering T in inorder (i.e., visit recursively the left subtree, the root and then the right subtree of T) and collecting the labels of the nodes. In [8] it is showed that, for a given length, the set of left-distance sequences is precisely that of same length Catalan words. Moreover, the induced bijection between Catalan words and binary trees gives a one-to-one correspondence between descents in Catalan words and particular nodes (left-child nodes having a right child) in binary trees.

Catalan words of odd lengths encompass a smaller size Catalan structure. This result is stated in the next corollary, see the bold entries in Table

Catalan words of length 2n+1 with n descents are enumerated by the nth Catalan number 1n+1(2nn).

There are three patterns of length two, namely 00, 01 and 10, and Catalan words avoiding such a pattern do not have descents, thus the corresponding bivariate generating functions collapse into one variable ones.

3 The sets C(p) for a length three pattern p

Here we turn our attention to patterns of length three. There are thirteen such patterns, and we give the distribution and the popularity of descents on Catalan words avoiding each of them. Some of the obtained results are summarized in Tables 2 and 3.

As in the case of length two patterns, a Catalan word avoiding 010 does not have descents, and we have the next theorem.

Note that the sequences defined by the two generating functions in Corollary 8 do not appear in [11].

For k≥1, we define Ak⊂C(100) as the set of Catalan words avoiding 100 with exactly k zeros, and let Ak(x,y) be the generating function for Ak.

A Catalan word w∈A2 has one of the three following forms:

Taking into account all previous cases, we obtain the following functional equations: