Depthwise separable convolutions reduce the number of parameters and computation used in convolutional operations while increasing representational efficiency. They have been shown to be successful in image classification models, both in obtaining better models than previously possible for a given parameter count (the Xception architecture) and considerably reducing the number of parameters required to perform at a given level (the MobileNets family of architectures). Recently, convolutional sequence-to-sequence networks have been applied to machine translation tasks with good results. In this work, we study how depthwise separable convolutions can be applied to neural machine translation. We introduce a new architecture inspired by Xception and ByteNet, called SliceNet, which enables a significant reduction of the parameter count and amount of computation needed to obtain results like ByteNet, and, with a similar parameter count, achieves new state-of-the-art results. In addition to showing that depthwise separable convolutions perform well for machine translation, we investigate the architectural changes that they enable: we observe that thanks to depthwise separability, we can increase the length of convolution windows, removing the need for filter dilation. We also introduce a new "super-separable" convolution operation that further reduces the number of parameters and computational cost for obtaining state-of-the-art results. 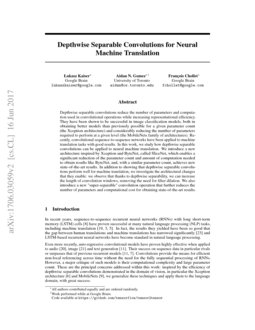 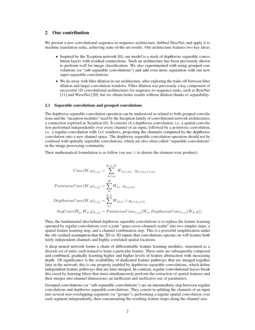 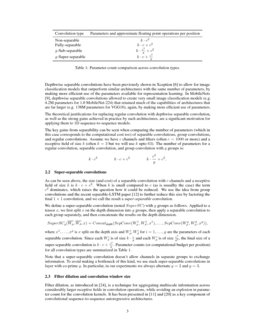 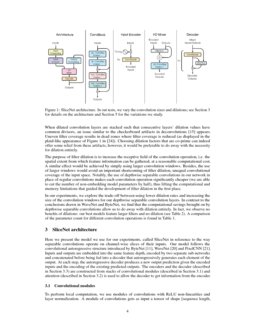 Augmentations: An Insight into their Effectiveness on Convolution Neural Networks

Augmentations are the key factor in determining the performance of any n...
Sabeesh Ethiraj, et al. ∙

In this paper, we propose the use of in-training matrix factorization to...
Zachary Kaden, et al. ∙

have proven successful at many natural language processing (NLP) tasks, including machine translation

(Kalchbrenner et al., 2016). Their success on sequence data in particular rivals or surpasses that of previous recurrent models (Kalchbrenner et al., 2016; Gehring et al., 2017). Convolutions provide the means for efficient non-local referencing across time without the need for the fully sequential processing of RNNs. However, a major critique of such models is their computational complexity and large parameter count. These are the principal concerns addressed within this work: inspired by the efficiency of depthwise separable convolutions demonstrated in the domain of vision, in particular the Xception architecture (Chollet, 2016) and MobileNets (Howard et al., 2017), we generalize these techniques and apply them to the language domain, with great success.

The depthwise separable convolution operation can be understood as related to both grouped convolutions and the "inception modules" used by the Inception family of convolutional network architectures, a connection explored in Xception

groups as follows. Applied to a tensor

Filter dilation, as introduced in Yu and Koltun (2015), is a technique for aggregating multiscale information across considerably larger receptive fields in convolution operations, while avoiding an explosion in parameter count for the convolution kernels. It has been presented in Kalchbrenner et al. (2016) and van den Oord et al. (2016a) as a key component of convolutional sequence-to-sequence autoregressive architectures. When dilated convolution layers are stacked such that consecutive layers’ dilation values have common divisors, an issue similar to the checkerboard artifacts in deconvolutions (Odena et al., 2016) appears. Uneven filter coverage results in dead zones where filter coverage is reduced (as displayed in the plaid-like appearance of Figure 1 in (Yu and Koltun, 2015)). Choosing dilation factors that are co-prime can indeed offer some relief from these artifacts, however, it would be preferable to do away with the necessity for dilation entirely. The purpose of filter dilation is to increase the receptive field of the convolution operation, i.e. the spatial extent from which feature information can be gathered, at a reasonable computational cost. A similar effect would be achieved by simply using larger convolution windows. Besides, the use of larger windows would avoid an important shortcoming of filter dilation, unequal convolutional coverage of the input space. Notably, the use of depthwise separable convolutions in our network in place of regular convolutions makes each convolution operation significantly cheaper (we are able to cut the number of non-embedding model parameters by half), thus lifting the computational and memory limitations that guided the development of filter dilation in the first place. In our experiments, we explore the trade-off between using lower dilation rates and increasing the size of the convolution windows for our depthwise separable convolution layers. In contrast to the conclusions drawn in WaveNet and ByteNet, we find that the computational savings brought on by depthwise separable convolutions allow us to do away with dilation entirely. In fact, we observe no benefits of dilations: our best models feature larger filters and no dilation (see Table 2). A comparison of the parameter count for different convolution operations is found in Table 1.

Here we present the model we use for our experiments, called SliceNet in reference to the way separable convolutions operate on channel-wise slices of their inputs. Our model follows the convolutional autoregressive structure introduced by ByteNet (Kalchbrenner et al., 2016), WaveNet (van den Oord et al., 2016a) and PixelCNN (van den Oord et al., 2016b). Inputs and outputs are embedded into the same feature depth, encoded by two separate sub-networks and concatenated before being fed into a decoder that autoregressively generates each element of the output. At each step, the autoregressive decoder produces a new output prediction given the encoded inputs and the encoding of the existing predicted outputs. The encoders and the decoder (described in Section 3.3) are constructed from stacks of convolutional modules (described in Section 3.1) and attention (described in Section 3.2) is used to allow the decoder to get information from the encoder.

To perform local computation, we use modules of convolutions with ReLU non-linearities and layer normalization. A module of convolutions gets as input a tensor of shape [sequence length, feature channels] and returns a tensor of the same shape. Each step in our module consist of three components: a

ReLU activation of the inputs, followed by a depthwise separable convolution SepConv, followed by layer normalization. Layer normalization (Ba et al., 2016) acts over the h hidden units of the layer below, computing layer-wise statistics and normalizing accordingly. These normalized units are then scaled and shifted by scalar learned parameters G and B respectively, producing the final units to be activated by a non-linearity:

where the sum are taken only over the last (depth) dimension of x, and G and B are learned scalars. A complete convolution step is therefore defined as:

ConvModules are used in stacks in our module, the output of the last feeding into the next. We denote a stack with k modules by ConvModulesk

For attention, we use a simple inner-product attention that takes as input two tensors: source of shape [m,depth] and target of shape [n,depth]

. The attention mechanism computes the feature vector similarities at each position and re-scales according to the depth:

To allow the attention to access positional information, we add a signal that carries it. We call this signal the timing, it is a tensor of any shape [k,depth] defined by concatenating sine and cosine functions of different frequencies calculated upto k:

Our full attention mechanism consists of adding the timing signal to the targets, performing two convolutional steps, and then attending to the source:

As previously discussed, the outputs of our model are generated in an autoregressive manner. Unlike RNNs, autoregressive sequence generation depends not only on the previously generated output, but potentially all previously generated outputs. This notion of long term dependencies has proven highly effect in NMT before. By using attention, establishing long term dependencies has been shown to significantly boost task performance of RNNs for NMT Cho et al. (2014a). Similarly, a convolutional autoregressive generation scheme offer large receptive fields over the inputs and past outputs, capable of establishing these long term dependencies. Below we detail the structure of the InputEncoder, IOMixer and Decoder. The OutputEmbedding simply performs a learning-embedding look-up. We denote the concatenation of tensors a and b along the dth dimension as [a∥db].

Machine translation using deep neural networks achieved great success with sequence-to-sequence models Sutskever et al. (2014); Bahdanau et al. (2014); Cho et al. (2014b) that used recurrent neural networks (RNNs) with long short-term memory (LSTM, Hochreiter and Schmidhuber (1997)) cells. The basic sequence-to-sequence architecture is composed of an RNN encoder which reads the source sentence one token at a time and transforms it into a fixed-sized state vector. This is followed by an RNN decoder, which generates the target sentence, one token at a time, from the state vector. While a pure sequence-to-sequence recurrent neural network can already obtain good translation results Sutskever et al. (2014); Cho et al. (2014b), it suffers from the fact that the whole input sentence needs to be encoded into a single fixed-size vector. This clearly manifests itself in the degradation of translation quality on longer sentences and was overcome in Bahdanau et al. (2014) by using a neural model of attention. We use a simplified version of this neural attention mechanism in SliceNet, as introduced above. Convolutional architectures have been used to obtain good results in word-level neural machine translation starting from Kalchbrenner and Blunsom (2013) and later in Meng et al. (2015). These early models used a standard RNN on top of the convolution to generate the output. The state of this RNN has a fixed size, and in the first one the sentence representation generated by the convolutional network is also a fixed-size vector, which creates a bottleneck and hurts performance, especially on longer sentences, similarly to the limitations of RNN sequence-to-sequence models without attention Sutskever et al. (2014); Cho et al. (2014b) discussed above. Fully convolutional neural machine translation without this bottleneck was first achieved in Łukasz Kaiser (2016) and Kalchbrenner et al. (2016). The model in Łukasz Kaiser (2016) (Extended Neural GPU) used a recurrent stack of gated convolutional layers, while the model in Kalchbrenner et al. (2016)

(ByteNet) did away with recursion and used left-padded convolutions in the decoder. This idea, introduced in WaveNet

van den Oord et al. (2016a), significantly improves efficiency of the model. The same technique is used in SliceNet as well, and it has been used in a number of neural translation models recently, most notably in Gehring et al. (2017) where it is combined with an attention mechanism in a way similar to SliceNet. Depthwise separable convolutions were first studied by Sifre Sifre and Mallat (2013) during a 2013 internship at Google Brain, and were first introduced in an ICLR 2014 presentation Vanhoucke (2014). In 2016, they were demonstrated to yield strong results on large-scale image classification in Xception Chollet (2016), and in 2017 they were shown to lead to small and parameter-efficient image classification models in MobileNets Howard et al. (2017).

We design our experiments with the goal to answer two key questions:

We evaluate all models on the WMT English to German translation task and use newstest2013 evaluation set for this purpose. For two best large models, we also provide results on the standard test set, newstest2014, to compare with other works. For tokenization, we use subword units, and follow the same tokenization process as Sennrich Sennrich et al. (2015)

. All of our experiments are implemented using the TensorFlow framework

Abadi et al. (2015). A comparison of our different models in terms of parameter count and Negative Log Perplexity as well as per-token Accuracy on our task are provided in Table 2. The parameter count (and computation cost) of the different types of convolution operations used was already presented in Table 1. Our experimental results allow us to draw the following conclusions:

Finally, we run two larger models with a design based on the conclusions drawn from our first round of experiments: a SliceNet model which uses depthwise separable convolutions and a SliceNet model which uses super-separable convolutions, with significantly higher feature depth in both cases. We achieve state-of-the-art results, as shown in Table 3, where we also include previously reported results for comparison. For getting the BLEU, we used a beam-search decoder with a beam size of 4 and a length penalty tuned on the evaluation set (newstest2013).