Style transfer is the process of rendering one image with some content in the style of another image, representing the style. Recent studies of Liu et al. (2017) have shown significant improvement of style transfer rendering quality by adjusting traditional methods of Gatys et al. (2016) and Johnson et al. (2016) with regularizer, forcing preservation of the depth map of the content image. However these traditional methods are either computationally inefficient or require training a separate neural network for new style. AdaIN method of Huang et al. (2017) allows efficient transferring of arbitrary style without training a separate model but is not able to reproduce the depth map of the content image. We propose an extension to this method, allowing depth map preservation. Qualitative analysis and results of user evaluation study indicate that the proposed method provides better stylizations, compared to the original style transfer methods of Gatys et al. (2016) and Huang et al. (2017). 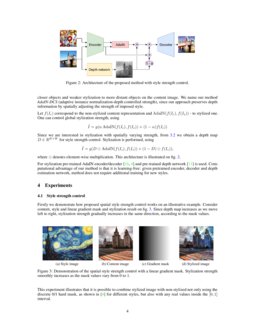 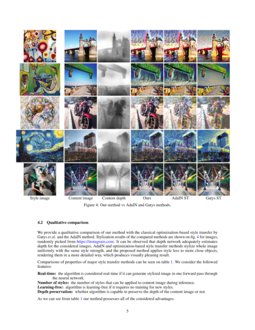 and is a long studied problem in computer vision. Early approaches

In 2016 Gatys et al. [2] proposed an algorithm of imposing arbitrary style taken from user defined style image on arbitrary content image by using representations of images that could be obtained with deep convolutional networks. However their method needed a computationally expensive optimization in the space of images requiring several minutes of processing a single image of moderate resolution on powerful GPUs. In later works Ulyanov et al. [8] and Jonson et al. [3]

proposed to use an end-to-end convolutional network for image transformation. In their method, the network was trained to transform any input image to the given style, according to the loss function used by Gatys

. These methods worked fast, but required training a separate transformation network for a new style. Work of Liu et. al (2017)

[1] extended traditional methods [2],[3] with a regularizer, forcing preservation of the depth map of the content image. This yielded significant improvement of style transfer rendering quality since depth was essential in human perception and analysis of images. Later architectures, such as AdaIN [4] and other ([9], [10]), allowed transferring arbitrary style without training a separate network but lacked rendering quality due to failure to preserve the depth map of the content image.

In this work AdaIN method is extended to allow preservation of the depth map. Specific structure of the method does not allow adding depth regularizer, as in [1]. The main idea of this method is to stylize image according to its perceptual depth, that could be found with using contemporary depth estimation models, such as of Chen et al. [11]. We suggest that closer objects on the image should be less stylized than distant ones, and use spatial style strength control to stylize different parts of image with different strength. The main advance of our method is that it can be used in real-time for any pair of content and style images. We demonstrate that the proposed extension improves the quality of the original AdaIn method and provides stylizations of comparable quality to [2], being much more efficient.

The remainder of paper organized as follows. Section 2 gives an overview of the related methods. Section 3 describes proposed method and specific details of approaches that are related to it. In section 4 we provide experimental results and compare our method with alternative style transfer methods qualitatively and with the help of a user evaluation study. Finally section 5 concludes.

However method of Gatys et al. is very computationally demanding. The generation of single image with moderate resolution takes several minutes even on modern GPUs. So later works by Ulyanov [8] and Jonson [3] proposed to impose style by passing a content image through a transformation network, trained to impose fixed style on a big dataset of content images. The transformation network is trained to solve the optimization task introduced in Gatys et al.. Thus trained model is tied to one specific style, and imposing another style requires a separate model.

In later works, Dumoulin et al. [17] and Chen et al. [18] proposed to use so-called style banks for different styles to reduce the number of parameters for multi-style rendering. The main idea was to let only a small portion of the network to control the style, all other parameters were held constant for different styles. Chen et al. proposed to use convolutional layers in the middle of end-to-end transform network as style banks, and Dumoulin et al. used parameters of instance normalization layers [8] for style representations. This approach allowed to use several different styles for fast style transfer, but still it required to train some subset of parameters for each new style. In [9] it was proposed to use separate model, predicting parameters of instance normalization, given the style image, rather than train them.

style transfer. This approach considered pretrained deep convolution encoder (they also used VGG-19 architecture) for high-features extraction and decoders, which can reconstruct images from hidden representation from different layers of VGG. For style transfer they applied whitening and linear transformation which imposed the style, represented as mean vector and covariance matrix of the transformation. Stylization results were obtained after passing hidden representations through the trained decoders.

The task of depth-preserving style transfer was first covered by Liu et al. [1], in their work the transformation network from Jonson’s paper [3] learned to generate images that were also close to content by its depth, where image depth was calculated with network proposed by Chen et al. [11].

In AdaIN method [4] any content image Ic can be stylized using any style image Is. Stylization result ^I is obtained using

). The encoder is a fully-convolutional part (until relu4_1 layer) of VGG network, pre-trained on ImageNet dataset

[21] (and its weights are fixed in the following decoder training). Decoder g(x)

is symmetric to the encoder: every max-pooling operator is replaced with

nearest neighbors upsample layer, and all convolution-ReLU blocks are replaced with the same block, except the last one, which has no ReLU layer after it. So the output of decoder has the same dimensionality as the content image

One of the advantages of this approaches is that, after learning a decoder, we can use AdaIN outputs as a hidden representation of the stylized image. By mixing it with content image representation we can control stylization strength.

Many image depth estimation models exist. We use proposed by Chen et al. [11] end-to-end network, which makes predictions using only the image itself. This method is trained for relative depth reconstruction, so its output can only distinguish which pixel on image is closer or more distant (by assigning lesser or larger values to the pixel). For our method we rescale estimated image depth map to [0,1] segment, by subtracting minimal value and dividing by the difference between maximal and minimal value. Thus 0 corresponds to most close pixels and 1 - to most distant ones. It is possible to adjust minimal and maximum values to control impact of depth on the strength of the imposed style.

Let f(Ic) correspond to the non-stylized content representation and AdaIN(f(Ic),f(Is)) - to stylized one. One can control global stylization strength, using

Since we are interested in stylization with spatially varying strength, from 3.2 we obtain a depth map D∈RH×W for style strength control. Stylization is performed, using

where ⊙ denotes element-wise multiplication. This architecture is illustrated on fig. 2.

For stylization pre-trained AdaIN encoder/decoder [16, 4] and pre-trained depth network [11] is used. Computational advantage of our method is that it is learning-free: given pretrained encoder, decoder and depth estimation network, method does not require additional training for new styles.

Firstly we demonstrate how proposed spatial style strength control works on an illustrative example. Consider content, style and linear gradient mask and stylization result on fig. 3. Since depth map increases as we move left to right, stylization strength gradually increases in the same direction, according to the mask values.

This experiment illustrates that it is possible to combine stylized image with non-stylized not only using the discrete 0/1 hard mask, as shown in [4] for different styles, but also with any real values inside the [0,1] interval.

We provide a qualitative comparison of our method with the classical optimization-based style transfer by Gatys et al. and the AdaIN method. Stylization results of the compared methods are shown on fig. 4 for images, randomly picked from https://instagram.com. It can be observed that depth network adequately estimates depth for the considered images, AdaIN and optimization-based style transfer methods stylize whole image uniformly with the same style strength, and the proposed method applies style less to more close objects, rendering them in a more detailed way, which produces visually pleasing result.

Comparisons of properties of major style transfer methods can be seen on table 1. We consider the followed features:

the algorithm is considered real-time if it can generate stylized image in one forward pass through the neural network.

the number of styles that can be applied to content image during inference.

algorithm is learning-free if it requires no training for new styles.

whether algorithm is capable to preserve the depth of the content image or not.

As we can see from table 1 our method possesses all of the considered advantages.

Procedure. To provide a more general comparison of style transfer methods we conduct a user evaluation study. The study consists of surveys and each survey allows to compare two stylization methods. In each survey a number of content images are stylized using a number of style images. For each content-style pair a respondent is shown a pair of stylizations with the two compared methods and he is asked to select the result he aesthetically likes more. To omit position bias, for each content-style pair stylizations by different methods appear in random order. We did not tell the respondents anything about the depth preservation concept and our algorithm details.

Setup. We conduct two surveys: our method vs. AdaIN and our method vs. optimization-based style transfer by Gatys et al. To omit image selection bias we take 6 typical style images, used in style transfer literature, and 7 content images. Content images were not cherry picked, the only limitation was that they should contain objects with different proximity to the viewer. Then all contents were stylized using all styles yielding 42 stylizations in total. No filtering was performed for the sake of fairness of the experiments. Stylization strengths of AdaIN and optimization-based style transfer were adapted to match average stylization strength of our method to make results comparable.

Results. The results of user study evaluation study are presented on table 2. Our method receives significantly higher evaluation than AdaIN, which validates the importance of preserving information about depth on the content image. Also our method receives higher score compared to optimization-based style transfer method of Gatys et al. Although margin is not big this time, our method performs stylization in real-time without computationally intensive optimization used by the method of Gatys et al.

We propose an extension to AdaIN method, allowing to preserve depth information from the content image. All other benefits of AdaIN are preserved, namely fast real-time stylization and the ability to transfer arbitrary style at inference time without additionally training the model. Qualitative analysis reveals that the proposed method is capable to preserve information about proximity to objects on the stylized image and results of the user evaluation study highlight that depth preservation is important for the users, making them to prefer our method compared to AdaIN and optimization-based style transfer methods.