In this work, we exploit a depth estimation Fully Convolutional Residual Neural Network (FCRN) for in-air perspective images to estimate the depth of underwater perspective and omni-directional images. We train one conventional and one spherical FCRN for underwater perspective and omni-directional images, respectively. The spherical FCRN is derived from the perspective FCRN via a spherical longitude-latitude mapping. For that, the omni-directional camera is modeled as a sphere, while images captured by it are displayed in the longitude-latitude form. Due to the lack of underwater datasets, we synthesize images in both data-driven and theoretical ways, which are used in training and testing. Finally, experiments are conducted on these synthetic images and results are displayed in both qualitative and quantitative way. The comparison between ground truth and the estimated depth map indicates the effectiveness of our method. 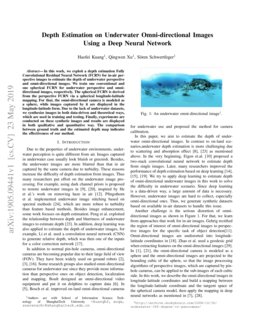 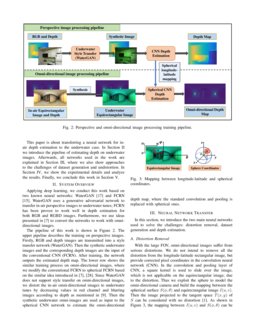 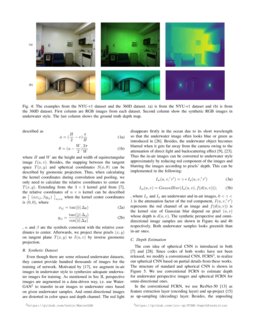 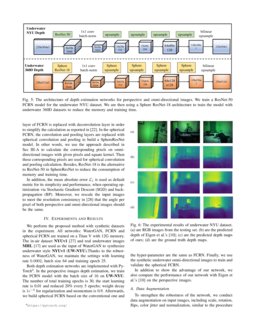 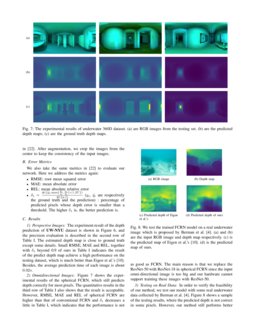 . In addition, deep learning was also applied to estimate the depth of underwater images, for example, Li et al. used a convolution neural network (CNN) to generate relative depth, which was then one of the inputs for a color correction network

In this paper, we aim to estimate the depth of underwater omni-directional images. In contrast to on-land scenarios,underwater depth estimation is more challenging due to scattering and absorption effect [8, 23] as mentioned above. In the very beginning, Eigen et.al. [10] proposed a two-stack convolutional neural network to estimate depth from single images. Later, many researchers improved the performance of depth estimation based on deep learning [14, 15, 19]. We try to apply deep learning to estimate depth of omni-directional underwater images in this work to solve the difficulty in underwater scenario. Since deep learning is a data-driven way, a large amount of data is necessary. However, underwater images are hard to collect, especially omni-directional ones. Thus, we generate synthetic datasets based on available in-air datasets to handle this issue.

This paper is about transferring a neural network for in-air depth estimation to the underwater case. In Section II we introduce the pipeline of estimating depth on underwater images. Afterwards, all networks used in the work are explained in Section III, where we also show approaches to the challenges of dataset generation and undistortion. In Section IV, we show the experimental details and analyze the results. Finally, we conclude this work in Section V.

Applying deep learning, we conduct this work based on two known neural networks: WaterGAN [17] and FCRN [15]. WaterGAN uses a generative adversarial network to transfer in-air perspective images to underwater tunes; FCRN has been proven to work well in depth estimation for both RGB and RGBD images. Furthermore, we use ideas presented in [7] to convert the networks to work with omni-directional images.

The pipeline of this work is shown in Figure 2. The upper pipeline describes the training on perspective images. Firstly, RGB and depth images are transmitted into a style transfer network (WaterGAN). Then the synthetic underwater images and the corresponding depth images are the input of the conventional CNN (FCRN). After training, the network outputs the estimated depth map. The lower row shows the similar training process on omni-directional images, where we modify the conventional FCRN to spherical FCRN based on the similar idea introduced in [7, 28]. Since WaterGAN does not support style transfer on omni-directional images, we distort the in-air omni-directional images to underwater tunes by decreasing values in red channel and blurring images according to depth as mentioned in [9]. Then the synthetic underwater omni-images are used as input to the spherical CNN network to estimate the omni-directional depth map, where the standard convolution and pooling is replaced with spherical ones.

In this section, we introduce the two main neural networks used to solve the challenges: distortion removal, dataset generation and depth estimation.

With the large FOV, omni-directional images suffer from serious distortions. We do not intend to remove all the distortion from the longitude-latitude rectangular image, but provide corrected pixel coordinates in the convolution neural network (CNN). In the convolution and pooling layer of CNN, a square kernel is used to slide over the image, which is not applicable on the equirectangular image, due to the distortion. Thus we exploit the sphere to model the omni-directional camera and build the mapping between the spherical surface S(ϕ,θ) and equirectangular image I(u,v). Then the image projected to the tangent space T(x,y) of S can be considered with no distortion [1]. As shown in Figure 3, the mapping between I(u,v) and S(ϕ,θ) can be described as

, α and β are the symbols consistent with the relative coordinates to center. Afterwards, we project these pixels (x,y) on tangent plane T(x,y) to I(u,v) by inverse gnomonic projection.

Even though there are some released underwater datasets, they cannot provide hundred thousands of images for the training of network. Motivated by [17], we augment in-air images in underwater style to synthesize adequate underwater images for training. As mentioned in Sec II, perspective images are augmented in a data-driven way, i.e. use WaterGAN333https://github.com/kskin/WaterGAN to transfer in-air images to underwater ones based on given underwater samples. And omni-directional images are distorted in color space and depth channel. The red light disappears firstly in the ocean due to its short wavelength so that the underwater image often looks blue or green as introduced in [26]. Besides, the underwater object becomes blurred when it gets far away from the camera owing to the attenuation of direct light and backscattering effect [9, 23]. Thus the in-air images can be converted to underwater style approximately by reducing red component of the images and blurring the images according to pixels’ depth. This can be implemented in the following:

, where Iw and Ia are underwater and in-air images, 0<γ<1 is the attenuation factor of the red component, I(u,v,′r′) represents the red channel of an image and f(d(u,v)) is the kernel size of Gaussian blur depend on pixel (u,v) whose depth is d(u,v). The synthetic perspective and omni-directional image samples are shown in Figure 4 and 4 respectively. Both underwater samples looks greenish than in-air ones.

The core idea of spherical CNN is introduced in both [7] and [28]. Since codes of both works have not been released, we modify a conventional CNN, FCRN444https://github.com/iro-cp/FCRN-DepthPrediction, to realize our spherical CNN based on partial details from these works. The structure of standard and spherical CNN is shown in Figure 5. We use conventional FCRN to estimate depth for underwater perspective images and spherical FCRN for omni-directional ones.

is used as default metric for its simplicity and performance, when operating optimization via Stochastic Gradient Descent (SGD) and back-propagation (BP). Moreover, we rescale the input images to meet the resolution consistency in

[28] that the angle per pixel of both perspective and omni-directional images should be the same.

We perform the proposed method with synthetic datasets in the experiment. All networks: WaterGAN, FCRN and spherical FCRN are trained on a Titan V with 12G memory. The in-air dataset NYUv1 [27] and real underwater images MHL [17] are used as the input of WaterGAN to synthesize underwater style NYUv1 (UW-NYU).Thanks to the robustness of WaterGAN, we maintain the settings with learning rate 0.0002

Both depth estimation networks are implemented with PyTorch

555https://pytorch.org/. In the perspective images depth estimation, we train the FCRN model with the batch size of 16 on UW-NYU. The number of total training epochs is 30, the start learning rate is 0.01 and reduced 20% every 5 epochs; weight decay is 1e−4 for regularization and momentum is 0.9. Afterwards, we build spherical FCRN based on the conventional one and the hyper-parameter are the same as FCRN. Finally, we use the synthetic underwater omni-directional images to train and validate the spherical FCRN.

To strengthen the robustness of the network, we conduct data augmentation on input images, including scale, rotation, flips, color jitter and normalization, similar to the procedure in [22]. After augmentation, we crop the images from the center to keep the consistency of the input images.

We also take the same metrics in [22] to evaluate our network. Here we address the metrics again:

The experiment result of the depth prediction of UW-NYU dataset is shown in Figure 6, and the precision evaluation is described in the second row of Table I. The estimated depth map is close to ground truth except some details. Small RMSE, MAE and REL, together with δ1 beyond 0.9 of ours in Table I indicates the result of the predict depth map achieve a high performance on the testing dataset, which is much better than Eigen et al.’s [10]. Besides, the average prediction time of each image is about 0.02s.

Figure 7 shows the experimental results of the spherical FCRN, which still predicts depth correctly for most pixels. The quantitative results in the third row of Table I also shows that the result is acceptable. However, RMSE, MAE and REL of spherical FCRN are higher than that of conventional FCRN and δ1 decreases a little in Table I, which indicates that the performance is not as good as FCRN. The main reason is that we replace the ResNet-50 with ResNet-18 in spherical FCRN since the input omni-directional image is too big and our hardware cannot support training these images with ResNet-50.

In order to verify the feasibility of our method, we test our model with some real underwater data collected by Berman et al. [4]. Figure 12 shows a sample of the testing results, where the predicted depth is not correct in some pixels. However, our method still performs better than Eigen et al.’s. One possible reason could be the style of this image sets is different from our training dataset. The former looks blueish while the latter looks greenish. Another possible reason is the difference between camera models. The largest depth of training dataset is 10 meters while the the longest distance of Figure (b)b is more than 15 meters.

The above experimental results show that the conventional and spherical FCRN achieve good results on synthetic underwater perspective and omni-directional images, respectively. However, it does not show good performance when testing on a real underwater dataset. The main possible reason is that the style of the real underwater dataset and the synthetic dataset are too different. To overcome this challenge, we will enlarge the diversity of the training dataset in our future work, for example mixing images captured from different devices. Moreover, we will try to synthesize underwater images using accurate image formulation model [25]. On the other hand, we also plan to collect more real underwater omni-directional images to validate the spherical FCRN model. In addition, we will put more effort on transferring conventional FCRN to spherical FCRN without retraining, to save computation time and resources, which is reported feasible in [28].