Nowadays, geographic information related to Twitter is crucially important for fine-grained applications. However, the amount of geographic information avail- able on Twitter is low, which makes the pursuit of many applications challenging. Under such circumstances, estimating the location of a tweet is an important goal of the study. Unlike most previous studies that estimate the pre-defined district as the classification task, this study employs a probability distribution to represent richer information of the tweet, not only the location but also its ambiguity. To realize this modeling, we propose the convolutional mixture density network (CMDN), which uses text data to estimate the mixture model parameters. Experimentally obtained results reveal that CMDN achieved the highest prediction performance among the method for predicting the exact coordinates. It also provides a quantitative representation of the location ambiguity for each tweet that properly works for extracting the reliable location estimations. 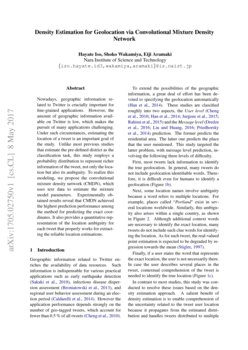 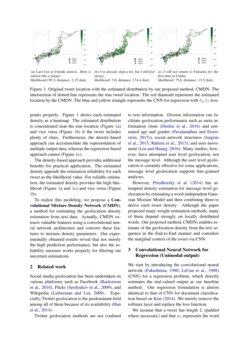 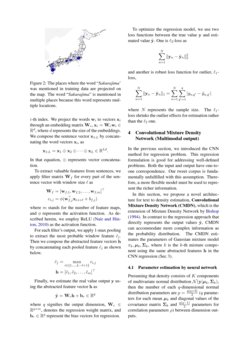 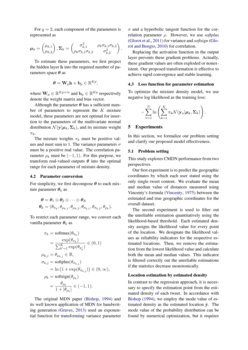 Interpretable Mixture Density Estimation by use of Differentiable Tree-module

We propose a method for embedding two-dimensional locations in a continu...
Afshin Rahimi, et al. ∙

Beyond Black Box Densities: Parameter Learning for the Deviated Components

As we collect additional samples from a data population for which a know...
Dat Do, et al. ∙

The aim of this study was to improve previous zonal approaches to expect...
Thomas Sawczuk, et al. ∙

Geographic information related to Twitter enriches the availability of data resources. Such information is indispensable for various practical applications such as early earthquake detection Sakaki et al. (2010), infectious disease dispersion assessment Broniatowski et al. (2013), and regional user behavior assessment during an election period Caldarelli et al. (2014). However the application performance depends strongly on the number of geo-tagged tweets, which account for fewer than 0.5 % of all tweets Cheng et al. (2010).

To extend the possibilities of the geographic information, a great deal of effort has been devoted to specifying the geolocation automatically Han et al. (2014)

. These studies are classified roughly into two aspects, the

First, most tweets lack information to identify the true geolocation. In general, many tweets do not include geolocation identifiable words. Therefore, it is difficult even for humans to identify a geolocation (Figure 0(b)).

Next, some location names involve ambiguity because a word refers to multiple locations. For example, places called “Portland” exist in several locations worldwide. Similarly, this ambiguity also arises within a single country, as shown in Figure 2. Although additional context words are necessary to identify the exact location, many tweets do not include such clue words for identifying the location. As for such tweet, the real-valued point estimation is expected to be degraded by regression towards the mean Stigler (1997).

Finally, if a user states the word that represents the exact location, the user is not necessarily there. In case the user describes several places in the tweet, contextual comprehension of the tweet is needed to identify the true location (Figure 0(c)).

In contrast to most studies, this study was conducted to resolve these issues based on the density estimation approach. A salient benefit of density estimation is to enable comprehension of the uncertainty related to the tweet user location because it propagates from the estimated distribution and handles tweets distributed to multiple points properly. Figure 1 shows each estimated density as a heatmap. The estimated distribution is concentrated near the true location (Figure 0(a)) and vice versa (Figure 0(b)) if the tweet includes plenty of clues. Furthermore, the density-based approach can accommodate the representation of multiple output data, whereas the regression-based approach cannot (Figure 0(c)).

To realize this modeling, we propose a Convolutional Mixture Density Network (CMDN)

Social media geolocation has been undertaken on various platforms such as Facebook Backstrom et al. (2010), Flickr Serdyukov et al. (2009), and Wikipedia Lieberman and Lin (2009). Especially, Twitter geolocation is the predominant field among all of them because of its availability Han et al. (2014).

However, priedhorsky2014inferring has attempted density estimation for message level geolocation by estimating a word-independent Gaussian Mixture Model and then combining them to derive each tweet density. Although the paper proposed many weight estimation methods, many of them depend strongly on locally distributed words. Our proposed method, CMDN, enables estimate of the geolocation density from the text sequence in the End-to-End manner and considers the marginal context of the tweet via CNN.

(CNN) for a regression problem, which directly estimates the real-valued output as our baseline method. Our regression formulation is almost identical to that of CNN for document classification based on kim2014cnn. We merely remove the softmax layer and replace the loss function.

(padded where necessary) and that

xi through an embedding matrix We, xi=Wewi∈Rd, where d represents the size of the embeddings. We compose the sentence vector x1:L by concatenating the word vectors xi, as

In that equation, ⊕ represents vector concatenation.

To extract valuable features from sentences, we apply filter matrix Wf for every part of the sentence vector with window size ℓ as

where m stands for the number of feature maps, and ϕ

represents the activation function. As described herein, we employ ReLU

Nair and Hinton (2010) as the activation function.

For each filter’s output, we apply 1-max pooling to extract the most probable window feature

^cj. Then we compose the abstracted feature vectors h by concatenating each pooled feature ^cj as shown below.

represent the bias vectors for regression.

To optimize the regression model, we use two loss functions between the true value y and estimated value ^y. One is ℓ2-loss as

and another is robust loss function for outlier,

where N represents the sample size. The ℓ1-loss shrinks the outlier effects for estimation rather than the ℓ2 one.

In the previous section, we introduced the CNN method for regression problem. This regression formulation is good for addressing well-defined problems. Both the input and output have one-to-one correspondence. Our tweet corpus is fundamentally unfulfilled with this assumption. Therefore, a more flexible model must be used to represent the richer information.

In this section, we propose a novel architecture for text to density estimation, Convolutional Mixture Density Network (CMDN), which is the extension of Mixture Density Network by bishop1994mdn. In contrast to the regression approach that directly represents the output values ^y, CMDN can accommodate more complex information as the probability distribution. The CMDN estimates the parameters of Gaussian mixture model πk,μk,Σk, where k is the k-th mixture component using the same abstracted features h in the CNN regression (Sec 3).

Presuming that density consists of K

For q=2, each component of the parameters is represented as

To estimate these parameters, we first project the hidden layer h into the required number of parameters space θ as

where Wp∈RKp×m and bp∈RKp respectively denote the weight matrix and bias vector.

Although the parameter θ has a sufficient number of parameters to represent the K mixture model, these parameters are not optimal for insertion to the parameters of the multivariate normal distribution N(y|μk,Σk), and its mixture weight πk.

must be positive values and must sum to 1. The variance parameters

σ must be a positive real value. The correlation parameter ρk must be (−1,1). For this purpose, we transform real-valued outputs θ into the optimal range for each parameter of mixture density.

For simplicity, we first decompose θ to each mixture parameter θk as

To restrict each parameter range, we convert each vanilla parameter θk as

The original MDN paper Bishop (1994) and its well known application of MDN for handwriting generation Graves (2013) used an exponential function for transforming variance parameter σ and a hyperbolic tangent function for the correlation parameter ρ. However, we use softplus Glorot et al. (2011) for variance and softsign Glorot and Bengio (2010) for correlation.

Replacing the activation function in the output layer prevents these gradient problems. Actually, these gradient values are often exploded or nonexistent. Our proposed transformation is effective to achieve rapid convergence and stable learning.

To optimize the mixture density model, we use negative log likelihood as the training loss:

In this section, we formalize our problem setting and clarify our proposed model effectiveness.

We compare our proposed model effectiveness by controlling experiment procedures, which replace the model components one-by-one. We also provide simple baseline performance. The following model configurations are presented in Table 2.

, which consists of ordinary least squares regression with

The experimental geolocation performance results are presented in Table 3.

In addition to the results obtained for the feature extraction part, the CNN-based model consistently achieved better prediction performance than the vanilla MLP-based model measured by both the mean and median.

Our proposed model provides high accuracy for our experimental data. Moreover, likelihood-based thresholds reveal a consistent indicator of estimation certainty. In this section, we further explore the properties of the CMDN from the viewpoint of difference of the loss function.

We compare the CNN-based model with different loss functions, ℓ2,ℓ1-loss for regression CNN-l2, CNN-l1 and negative log-likelihood for mixture density model CMDN. The output distance distributions are shown in Figure 5.

Although ℓ2-loss denotes the worst performance measured by mean and median among CNN-based models (Table 3), it represents the lowest outlier ratio. Consequently, the ℓ2

-loss is the most conservative estimate for our skewed corpus.

We can infer that the difference between the competitive model CNN-l1 and our proposed model CMDN is their estimation aggressiveness. The median of CMDN is remarkably lower than of CNN-l1, but the mean of CMDN is slightly larger than that of CNN-l1. The reason for these phenomena is the difference of the loss functions behavior for multiple candidate data. Even though the ℓ1-loss function is robust to outliers, the estimation deteriorates when the candidates appear with similar possibilities. In contrast, CMDN can accommodate multiple candidates as multiple mixture components. Therefore, CMDN imposes the appropriate probabilities for several candidates and picks up the most probable point as the prediction. In short, CMDN’s predictions become more aggressive than CNN-l1’s. Consequently, CMDN’s median value becomes lower than CNN-l1’s.

An important shortcoming of aggressive prediction is that the estimation deteriorates when the estimation fails. The mean value tends to be affected strongly by the outlier estimation. Therefore, CMDN’s mean value becomes higher than that of CNN-l1’s.

However, CMDN can overcome this shortcoming using a likelihood-based threshold, which first filters out the outlier. Therefore, we conclude that the negative log-likelihood for mixture density is better than those of other loss functions ℓ2 and ℓ1-loss for the regression.

This study assessed the performance of our proposed model, CMDN, using text data alone. Although text-only estimation is readily applicable to existing resources, we still have room for improvement of the prediction performance. The winner of the Twitter Geolocation Prediction Shared Task, miura2016simple, proposed that the unified architecture handle several meta-data such as the user location, user description, and time zone for predicting geolocations. The CMDN can integrate this information in the same manner.

Furthermore, liu2016where reports that the user home location strongly affects location prediction for a single tweet. For example, a routine tweet is fundamentally unpredictable using text contents alone, but if the user home location is known, this information is a valuable indication for evaluating the tweet. As future work, we plan to develop a unified architecture that incorporates user movement information using a recurrent neural network.

This study clarified the capabilities of the density estimation approach to Twitter geolocation. Our proposed model, CMDN, performed not only with high accuracy for our experimental data; it also extracted reliable geolocated tweets using likelihood-based thresholds. Results show that CMDN merely requires the tweet message contents to identify its geolocation, while obviating preparation of meta-information. Consequently, CMDN can contribute to extension of the fields in which geographic information application can be used.