Density and Distribution Evaluation for Convolution of Independent Gamma Variables

Several numerical evaluations of the density and distribution of convolution of independent gamma variables are compared in their accuracy and speed. In application to renewal processes, an efficient formula is derived for the probability mass function of the event count. 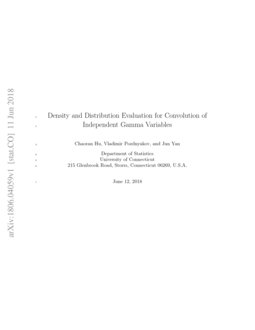 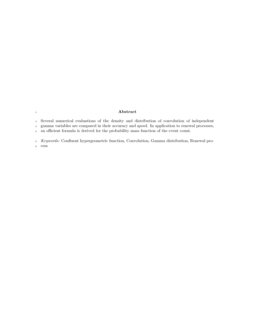 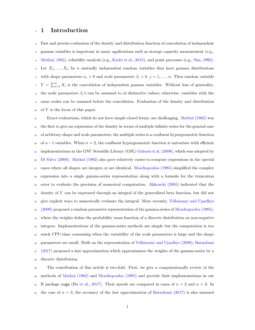 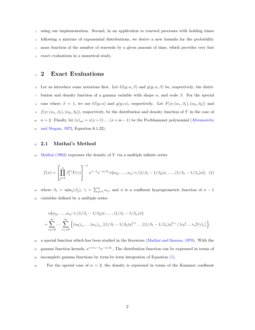 On the discrete analog of gamma-Lomax distribution: properties and applications

The gamma-Pareto type I convolution (GPC type I) distribution, which has...
Carl A. Wesolowski, et al. ∙

The distribution of waiting times until the occurrence of a critical eve...
Vivianne Olguín-Arias, et al. ∙

We investigate the role of Segal's Gamma-spaces in the context of classi...
Matilde Marcolli, et al. ∙

A Cluster Model for Growth of Random Trees

Fast and precise evaluation of the density and distribution function of convolution of independent gamma variables is important in many applications such as storage capacity measurement (e.g., Mathai, 1982), reliability analysis (e.g., Kadri et al., 2015), and point processes (e.g., Sim, 1992). Let X1,…,Xn be n

αi>0 and scale parameters βi>0, j=1,…,n. Then random variable Y=∑ni=1Xi is the convolution of independent gamma variables. Without loss of generality, the scale parameters βi’s can be assumed to of distinctive values; otherwise, variables with the same scales can be summed before the convolution. Evaluation of the density and distribution of Y is the focus of this paper.

Exact evaluations, which do not have simple closed forms, are challenging. Mathai (1982) was the first to give an expression of the density in terms of multiple infinite series for the general case of arbitrary shape and scale parameters; the multiple series is a confluent hypergeometric function of n−1 variables. When n=2, the confluent hypergeometric function is univariate with efficient implementations in the GNU Scientific Library (GSL) Galassi et al. (2009), which was adopted by Di Salvo (2006). Mathai (1982) also gave relatively easier-to-compute expressions in the special cases where all shapes are integers or are identical. Moschopoulos (1985) simplified the complex expression into a single gamma-series representation along with a formula for the truncation error to evaluate the precision of numerical computation. Akkouchi (2005) indicated that the density of Y can be expressed through an integral of the generalized beta function, but did not give explicit ways to numerically evaluate the integral. More recently, Vellaisamy and Upadhye (2009) proposed a random parameter representation of the gamma-series of Moschopoulos (1985), where the weights define the probability mass function of a discrete distribution on non-negative integers. Implementations of the gamma-series methods are simple but the computation is too much CPU-time consuming when the variability of the scale parameters is large and the shape parameters are small. Built on the representation of Vellaisamy and Upadhye (2009), Barnabani (2017) proposed a fast approximation which approximates the weights of the gamma-series by a discrete distribution.

The contribution of this article is two-fold. First, we give a computationally review of the methods of Mathai (1982) and Moschopoulos (1985) and provide their implementations in our R package coga (Hu et al., 2017). Their speeds are compared in cases of n=2 and n=3. In the case of n=3, the accuracy of the fast approximation of Barnabani (2017)

is also assessed using our implementation. Second, in an application to renewal processes with holding times following a mixture of exponential distributions, we derive a new formula for the probability mass function of the number of renewals by a given amount of time, which provides very fast exact evaluations in a numerical study.

where β1=minj(βj), γ=∑nj=1αj, and ϕ is a confluent hypergeometric function of n−1 variables defined by a multiple series

a special function which has been studied in the literature (Mathai and Saxena, 1978). With the gamma function kernels, xγ+ri−1e−x/β1, The distribution function can be expressed in terms of incomplete gamma functions by term-by-term integration of Equation (1).

For the special case of n=2, the density is expressed in terms of the Kummer confluent hypergeometric function, 1F1 as (Abramowitz and Stegun, 1972, Formula 13.1.2),

The distribution function when n=2 can be explicitly expressed as, for y>0,

Moschopoulos (1985) expresses the density of Y by a single gamma series with coefficients that can be calculated recursively:

with δ0=1 and γk=∑ni=1αi(1−β1/βi)k/k for k=1,2,…. This expression facilitates distribution function evaluation as

We first compare the speed of the two methods in the case of n=2. The shape parameters were set to be α1=α2∈{0.2,2,20}. The scale parameters were set to be (β1,β2)∈{(0.4,0.3),(4,0.3),(4,3)}. For each configuration, we used a large number (100,000) of simulated observations from the distribution to determine the bulk range of the observations. Then we evaluate the density and the distribution of the convolution over 100 equally spaced grid points in the bulk range. The evaluations were repeated 100 times.

Following the design and steps in the case of n=2, we conducted a numerical analysis for n=3. The shape parameters were set to be α1=α2=α3∈{0.2,2,20}. The scale parameters were set to be (β1,β2,β3)∈{(0.4,0.3,0.2),(4,0.3,0.2),(4,3,0.2),(4,3,2)}. The two methods gave numerically indistinguishable results in both density and distribution evaluations, verifying each other. Table 2 summarize the median timing results from 100 replicates. When n>2, the multivariable confluent hypergeometric function has no efficient implementations yet to the best of our knowledge. Therefore, Mathai’s method needs to evaluate n−1 nested infinite series, which makes it quite complicated (Jasiulewicz and Kordecki, 2003; Sen and Balakrishnan, 1999). In this case, Moschopoulos’ method is preferred for its single-series. The approximation of Barnabani (2017) was also included in the comparison, which is up to 30 times faster in density evaluation and 14 times faster in distribution evaluation than Moschopoulos’ method.

3 Application to a Renewal Process

Let {Uk}k≥1 be independent and identically distributed random variables following a mixture of two exponential distributions, Exp(β1) and Exp(β2), with weights p∈(0,1) and 1−p, respectively. For any t>0, define

where, by convention, the summation over an empty set is 0. The process N(t), t>0, is a renewal process. The following result gives an expression of the distribution of N(t) in terms of the Kummer confluent hypergeometric function, which allows a very efficient numerical evaluation.

For the renewal process defined in (4) and integer n≥0,

where E1 and E2 are independent of {Uk}k≥1 with Exp(β1) and Exp(β2) distributions, respectively. Next, using mixture randomization we get

Now it is sufficient to show that for any positive integers α1, α2 and y,β1,β2>0,

Firstly, from equation (3) we have

where the second equation follows from

Because of the identities

Let {Uk}k≥1 be independent and identically distributed random variables distributed as a mixture of S exponential distributions, Exp(βs) with weight ps, s=1,…,S, and ∑Ss=1ps=1. For n≥0,

s=1,…,S, kS=n−k1−⋯−kS−1, and FS is the distribution function of the convolution of S independent gamma variables with shape parameter (k1,…,kS) and scale parameter (β1,…,βS).

By substitution, we can complete proof. ∎

To demonstrate the computational efficiency of the result of Proposition 1, we performed a numerical study for S=2. The scale parameters of the exponential distributions were set to be (β1,β2)∈{(0.4,0.3),(4,0.3),(4,3)}. For each configuration, we evaluated Pr(N(t)=n} for t=10 and three n values corresponding to the 20th, 50th, and 90th percentiles of a random sample of size 1,000 from the distribution of N(10). The H function was evaluated with Mathai’s method, Moschopoulos’ method and the proposed result in Proposition 1. The numerical results are identical and the median timing results from 100 replicates are summarized in Table 3. The method in Proposition 1, which bypasses evaluating two distribution function of the convolution of two exponential variables, shows a huge advantage, speeding up Mathai’s method by a factor of about 60–200.

For S>2, we performed a similar study with Mathai’s and Moschopoulos’ method for evaluating H3 using the result in Corollary 1. For comparison in accuracy and speed, the approximation method of Barnabani (2017) in evaluating H3 was also included. The scale parameters of the exponential distributions were set to be

Again, for each configuration, we evaluated Pr(N(10)=n) for three n values corresponding to the 20th, 50th, and 90th percentiles of a random sample of size 1000 from the distribution of N(10). The median timing results from 100 replicates and the relative error of the approximation method are summarized in Table 4. Similar to the comparison reported in Section 2, Moschopoulos’ method is over 10 times faster than Mathai’s method in all the cases. A small sumation of β’s requires longer computaion time. The approximation method is over 6 times faster than Moschopoulo’s method, with relative error less than 1 percent.

We reviewed two exact methods and one approximation method for evaluating the density and distribution of convolutions of independent gamma variables. From our study, the method of Mathai (1982) is the fastest in the case of n=2 because of efficient GSL implementation of the univariate Kummer confluent hypergeometric function; when n>3, the method of Moschopoulos (1985) is faster than Mathai’s method. The fast approximation method Barnabani (2017) is quite accurate, which provides a useful tool for applications with n>3. Implementations of the reviewed methods are available in R package coga (Hu et al., 2017), which is built on C++ code for fast speed.

The result in Proposition 1 for the distribution of the event count in the renew process application with holding time following a mixture of exponential distribution is an extremely fast evaluation. One side-benefit of the proposition is formula (6) for the difference of distribution functions of convolution of two independent Erlang distributions with shape parameters that differ by 1. It can be evaluated accurately and efficiently using the GSL implementation of the confluent hypergeometric function 1F1

. This difference plays an important role in computation of distribution of the occupation times for a certain continuous time Markov chain