This paper presents our latest investigation on Densely Connected Convolutional Networks (DenseNets) for acoustic modelling (AM) in automatic speech recognition. DenseN-ets are very deep, compact convolutional neural networks, which have demonstrated incredible improvements over the state-of-the-art results on several data sets in computer vision. Our experimental results show that DenseNet can be used for AM significantly outperforming other neural-based models such as DNNs, CNNs, VGGs. Furthermore, results on Wall Street Journal revealed that with only a half of the training data DenseNet was able to outperform other models trained with the full data set by a large margin. 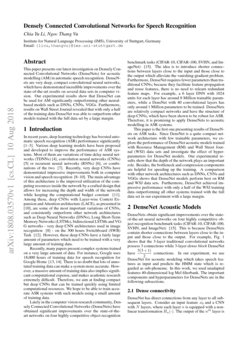 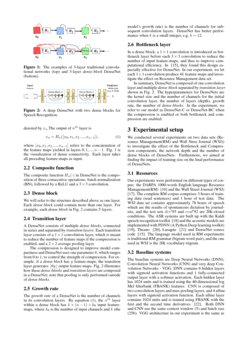 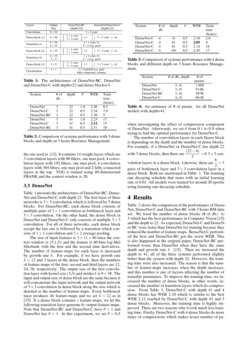 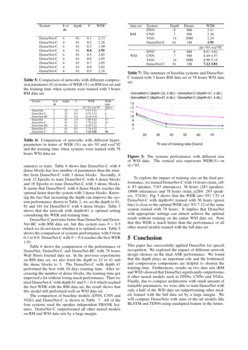 In this paper we show how we have achieved the state-of-the-art performa...
Kyu J. Han, et al. ∙

In this paper, we report state-of-the-art results on LibriSpeech among e...
Jason Li, et al. ∙

Visual Speech Recognition for Multiple Languages in the Wild

[1, 2, 3]. Various deep learning models have been proposed and developed to improve the performance of ASR systems. Most of them are variations of time delay neural networks (TDNNs) [4], convolution neural networks (CNNs)  [5]

[6], or combinations of the two  [7]. Recently, very deep CNNs have demonstrated impressive improvements both in computer vision and speech recognition  [8, 9, 10]. The main advantage of this architecture is the improved utilization of the computing resources inside the network by a crafted design that allows for increasing the depth and width of the network while keeping the computational budget constant  [11]. Among these, deep CNNs with Layer-wise Context Expansion and Attention architecture (LACE), as presented in  [10]

, are some of the most important variations of CNNs, and consistently outperform other network architectures such as Deep Neural Networks (DNNs), Long Short-Term Memory Networks (LSTMs), bidirectional LSTMs and VG-G networks - very deep CNN architectures used in image recognition

Recently, many papers present complex systems trained on a very large amount of data. For instance, Google uses 18,000 hours of training data for speech recognition for Google Home  [13, 14]. There is no doubt that lots of annotated training data can make a system more accurate. However, a massive amount of training data also implies significant computational expense, and makes academic research extremely difficult. Therefore, we aim at finding compact but deep CNNs that can be trained quickly using limited computational resources. We hope to be able to train accurate ASR systems with such models using a small amount of training data.

. The idea is to introduce shorter connections between layers close to the input and those close to the output which alleviate the vanishing-gradient problem. Furthermore, DenseNet requires fewer parameters than traditional CNNs; because they facilitate feature propagation and reuse features, there is no need to relearn redundant feature maps. For example, a 6 layer DNN with 1024 units for each layer has around 8 Million trainable parameters, while a DensNet with 40 convolutional layers has only around 1 Million parameters to be trained. DenseNets are relatively compact networks and have the structure of deep CNNs, which have been shown to be robust for ASR. Therefore, it is promising to apply DenseNets to acoustic modelling in ASR systems.

This paper is the first one presenting results of DenseN-ets on ASR tasks. Since DensNet is a quite compact network architecture with few trainable parameters, we explore the performance of DenseNet acoustic models trained with Resource Management (RM) and Wall Street Journal (WSJ) data sets and investigate the effect of hyper-parameters for DenseNet models. Our experimental results show that the depth of the network plays an important role. Besides, the bottleneck and compression components are helpful for speeding up the training. A comparison with other network architectures such as DNNs, CNNs and VGGs shows that DenseNet models perform best on RM and WSJ data sets. Furthermore, DenseNet achieved impressive performance with only a half of the WSJ training data outperforming all other systems trained with the full data set in our experiment with a large margin.

DenseNets obtain significant improvements over the state-of-the-art neural networks on four highly competitive object recognition benchmark tasks (CIFAR-10, CIFAR-100, SVHN, and ImageNet)  [15]. This is because DenseNets contain shorter connections between layers close to the input and those close to the output. For example, Fig. 1 shows that the 3-layer traditional convolutional networks possess 3 connections while 3-layer dense block DenseNet have 3(3+1)2

connections. In our experiment, we use DenseNet for acoustic modeling which takes speech features as input and predicts the HMM state which is regarded as sub-phoneme. In this work, we used unadapted features 40-dimensional log Mel filterbank. The important components and hyperparameters for DenseNets are in the following subsections.

DenseNet has direct connections from any layer to all subsequent layers. Consider an input feature x0 and a CNN with N layers, where each layer n is equipped with a nonlinear transformation Hn(⋅). The output of the nth layer is denoted by xn.The output of nth layer is

where [x0,x1,x2,...,xn−1] refers to the concatenation of the feature maps yielded in layers 0,1,...,n−1. Fig. 1 is the visualization of dense connectivity. Each layer takes all preceding feature-maps as input.

in DenseNet is the composition of three consecutive operations: batch normalization (BN), followed by a ReLU and a

A DenseNet consists of multiple dense blocks, connected in series and separated by transition layers. Each transition layer consists of a 1×1 convolution layer, which is meant to reduce the number of feature maps if the compression is enabled, and a 2×2 average pooling layer.

In a dense block, a 1×1 convolution is introduced as bottleneck layer before each 3×3 convolution to reduce the number of input feature-maps, and thus to improve computational efficiency. In  [15], they found this design especially effective for DenseNet. In our experiment, we let each 1×1 convolution produce 4k feature-maps and investigate the effect on Resource Management data set.

We conducted several experiments on two data sets (Resource Management(RM) and Wall Stree Journal (WSJ)) to investigate the effect of the Bottleneck and Compression components, the network depth and the number of dense blocks of DenseNets. Furthermore, we aimed at finding the impact of training size on the final performance of DenseNets.

Our experiments were performed on different types of corpus: the DARPA 1000-words English language Resource Management(RM)  [16] and the Wall Street Journal (WSJ)  [17]. The complete RM corpus comprises 3 hours of training data (read sentences) and 1 hour of test data. The WSJ data set contains approximately 78 hours of speech which are the results of spontaneous dictation by journalists, and the test sets dev′93 and eval′92 are 20k-closed conditions. The ASR systems are built up with the Kaldi speech recognition toolkit  [18] and the acoustic models are implemented with PDNN (A Python Deep learning toolkit)  [19]

[20], Lasagne  [21] and DenseNet source code  [15]. The language model used in RM experiments is traditional RM grammar (bigram word-pair), and the one used in WSJ is the 20k vocabulary trigram.

The size of input features is 3×11×40 since the context window is {5,1,5} and the feature is 40-bins log-Mel filterbank with the first and the second time derivatives. The number of feature-maps for each layer is increased by growth rate k. For example, if we have growth rate k=12

and 3 layers in the dense block, then the numbers of feature-maps of the first, second and third layers are 12, 24, 36, respectively. The output size of the first convolution layer with kernel size (3,3) and stride=1 is

9×38. The input and output size of dense block are the same because it will concatenate the input network and the output network of 3×3 convolution in dense block along the axis which is denoted as the number of feature-maps. Every bottleneck layer produces 4k feature-maps and we set k=12 as in  [15]. If a dense block contains c feature-maps, we let the following transition layer generate θc output feature-maps. Note that DenseNet-BC and DenseNet-C have θ<1 and DenseNet has θ=1. In this experiment, we set θ=0.5 when investigating the effect of compression component of DenseNet. Afterwards, we set θ from 0.1 to 0.9 when trying to find the optimal performance for DenseNet-C.

DenseNet-C performs better than DenseNet and Denst-Net-BC with RM data set, but this system uses θ=0.5 which we do not know whether it is optimal or not. Table 5 shows the comparison of systems performance with θ from 0.1 to 0.9. DenseNet-C with θ=0.4 reaches the best WER 1.91.

Table 6 shows the comparision of the performance of DenseNet, DenseNet-C and DenseNet-BC with 78 hours Wall Street Journal data set. In the previous experiments on RM data set, we also fixed the depth to 22 or 41 and the dense blocks to 3. The DenseNet-C with depth 41 performed the best with 10 days training time. After increasing the number of dense blocks, the training time got improved a lot without losing much performance. Then we tried DenseNet-C with depth 61 and θ=0.4 which reached the best WER with the RM data set, the result shows that this model still performed well on WSJ data set.

The comparison of baseline models (DNN, CNN and VGG) and DenseNet-C is shown in Table  7. All of the four systems used the speaker independent FBANK features. DenseNet-C outperformed all other neural models on RM and WSJ data sets by a large margin.

To explore the impact of training size on the final performance, we trained DenseNet-C with 14 hours (train_si8-4, 83 speaker, 7183 utterances), 36 hours (283 speakers, 18666 utterances) and 78 hours (train_si284: 283 speakers, 37416). Fig 3 shows that the WER (dev’93) 7.52 of DenseNet-C with depth=61 trained with 36 hours (green line) is close to the optimal WER (dev’93) 7.12 of the same system trained with 78 hours. It implies that DenseNet with appropriate settings can almost achieve the optimal result without training on the entire WSJ data set. Note that this WER is much better than the performance of all other neural models trained with the full data set.

This paper has successfully applied DenseNet for speech recognition. We explored the impact of different network design choices on the final ASR performance. We found that the depth plays an important role and the bottleneck and compression components are helpful to shorten the training time. Furthermore, results on two data sets (RM and WSJ) showed that DenseNet significantly outperforme-d other neural models such as DNNs, CNNs and VGGs. Finally, due to compact architecture with small amount of trainable parameters, we were able to train DenseNet with only a half of the WSJ data set outperforming other models trained with the full data set by a large margin. We will compare DenseNets with state-of-the-art models like BLSTM and TDNN using unadapted feature in the future.