This paper proposes a simple spatial-temporal smoothness based method for solving dense non-rigid structure-from-motion (NRSfM). First, we revisit the temporal smoothness and demonstrate that it can be extended to dense case directly. Second, we propose to exploit the spatial smoothness by resorting to the Laplacian of the 3D non-rigid shape. Third, to handle real world noise and outliers in measurements, we robustify the data term by using the L_1 norm. In this way, our method could robustly exploit both spatial and temporal smoothness effectively and make dense non-rigid reconstruction easy. Our method is very easy to implement, which involves solving a series of least squares problems. Experimental results on both synthetic and real image dense NRSfM tasks show that the proposed method outperforms state-of-the-art dense non-rigid reconstruction methods. 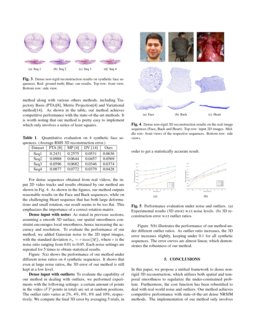 Non-rigid structure-from-motion (NRSfM) aims at simultaneously recovering the camera motion and non-rigid structure from 2D images by using a monocular camera, which is central to many computer vision applications (3D reconstruction, motion capture, human-computer interaction etc) and has received considerable attention in recent years. A great number of methods have been established, and most of the existing methods can be roughly categorized as sparse methods and dense methods

NRSfM is in essential under-determined (estimating a 3D point from a single 2D measurement), therefore, extra regularization is needed to constrain the problem. For sparse NRSfM, various priors/constraints have been enforced, such as shape basis

[1], trajectory basis [8], shape-trajectory basis [9][7] and smoothness [10]. In sparse reconstruction, the feature points are geometrically apart from each other, thus spatial regularization cannot be enforced. By contrast, dense NRSfM aims at achieving 3D non-rigid reconstruction for each pixel in a video sequence, where spatial constraint has been widely exploited to regularize the problem [11][12][13]. Garg et al.[14] proposed to enforce both the total variation constraint and the nuclear norm induced low-rank constraint on the 3D non-rigid shape. This results in a complex convex optimization and GPU is needed to speed up the implementation. Furthermore, they only implemented the method on complete and noise-free datasets, thus its robustness remains questionable. In Russell et al.’s work[13], segmentation is performed on both object-level and part-level, then piece-wise reconstruction is applied by assuming locally rigid pieces. In [15], motion segmentation is paired with rank constrained 2D track completion to deal with occlusions, then nuclear norm minimization is used to recover the 3D shape. Yu et al.[16] proposed to utilize the temporal smoothness in both camera motion and 3D deformation, where a template 3D shape is available. Ranftl et al.[17] investigated the relative scale in dynamic scene. All these constraints are based on motion and semantic segmentation, thus computational complex.

Dense NRSfM takes a 2D video obtained by a monocular camera as input, with image frames \bfI1⋯\bfIF each containing P pixels. In this paper, we assume the per-pixel feature tracks have been extracted, say by optical flow or dense matching. Thus, the input to our system is a 2F×P feature track matrix W, which stacks F following 2×P matrix: \bfWi=[ui1,⋯,uiPvi1,⋯,viP], where (uij,vij)T denotes the j-th feature point captured in the i-th image frame. Assuming an orthographic camera model and the camera has been centralized at the center of the object, we have: \bfWi=\bfR\bfRi\bfSi, where \bfRi is a 2×3 matrix that represents the first two rows of the rotation matrix of the i-th frame, and \bfSi is a 3×P matrix containing the 3D positions of every point in the i-th non-rigid shape. Stacking all the feature tracks for all frames gives:

with R and S are with dimension 2F×3F and 3F×P, respectively. Dense NRSfM aims at simultaneously recovering both the camera motion R and the non-rigid shape S from the feature track matrix W. The problem is inherently under-determined as the number of variables to estimate (3FP+3F) greatly exceeds the number of measurements 2FP. Therefore, extra constraints are needed to regularize the problem.

Under dense NRSfM, we solve for the camera rotation R by utilizing the low-rank structure of S. Even though we have to deal with tens of thousands of points, the rotation estimation method in [10] still could handle it as the computational complexity is independent of the number of points but only depends on the model complexity K.

In this paper, we propose to exploit the generic and generally available smoothness from temporal direction and spatial direction. By jointly enforcing the spatial and temporal constraints, we are able to achieve dense non-rigid reconstruction in an easy and elegant way.

First, we revisit the temporal smoothness, which has been widely used in sparse NRSfM [10]. We would like to argue that this simple strategy could be pretty efficient in achieving comparable performance with complex convex optimization or ADMM based methods.

By introducing smooth deformation regularization [18][19] [20], we can formulate the non-rigid shape recovery problem as minimizing a data term evaluated on the image measurements and a regularization term based on temporal smoothness, thus reaching the following optimization:

The rotation matrix R is of row full rank 2F thus \bfRT\bfR is of rank 2F generally. The smoothness matrix H is rank deficient too, thus \bfHT\bfH is of rank 3F−3 (for first order smoothness). In general case, \bfRT\bfR+λ\bfHT\bfH is a full rank matrix, thus invertible.

Connection: The smoothness constrained solution and the pseudo-inverse solution are connected as:

Therefore \rm rank(\bfSSmooth)=\rm rank(\bfSPI). As proved in [10], the pseudo-inverse solution is a degenerate case where the non-rigid shape at each frame lies on a plane. \bfSSmooth can be viewed as a per-frame weighted version of \bfSPI.

The temporal smoothness constrains the dense non-rigid reconstruction from the temporal dimension, i.e., the smoothness of 3D trajectory. However, it could not regularize the 3D shape at each frame. Garg et al.[14] proposed to use the total variation to encourage the spatial smoothness while maintaining sharp boundaries. The resultant optimization prohibits its real world application to large scale 3D reconstruction.

To efficiently and effectively utilize the smoothness alongside the spatial dimension, we propose a simple filtering mechanism, namely Laplacian filter, which enforces spatial smoothness locally in the 3D shape space. In Fig. 2, we illustrate different 2D filters in enforcing spatial smoothness. The Laplacian filter enforces a locally linear/planar model, which provides an easy way to encourage second order smoothness. As all linear filtering can be equivalently expressed as matrix multiplication, for the recovered non-rigid shape S, the filtering output is defined as:

where A is a 3FP×3FP matrix containing all the filtering operation, each row of A defines a spatial filter evaluated at the position of \bfSij.

Noise and outliers are inevitable in real world measurements. Dense NRSfM methods must handle them robustly. Most of the existing methods apply L2 on the data term, thus could not handle noise and outliers well. We propose to replace the L2 norm with L1 norm, thus increasing the robustness of the data term ∥\bfW−\bfR\bfS∥1.

By enforcing the spatial-temporal smoothness constraint and applying the robust L1 norm on data term, we reach:

where λ1 and λ2 are the trade-off parameters. The three terms are “data term”, “temporal smoothness term” and “spatial smoothness term” correspondingly. Under IRLS formulation, we solve the following least square problem in each iteration:

A closed-form solution can be derived by using the first order condition. However the computational complexity is high due to the filtering matrix A. Instead, we propose to solve the least square problem with gradient descent, where the gradient is derived as:

denotes the inverse operator of vectorization, which transforms a vector to matrix with proper dimension.

Setting up: To evaluate our method against existing state-of-the-art dense NRSfM methods, we used the 4 dense synthetic sequences and 3 real videos from [14]. Each sequence contains a 2D correspondence matrix and a quad mesh for neighborhood assignment. These sequences have over 20,000 trajectories forming dense surfaces, which makes the problem much more challenging than the sparse scenarios.

We first enforced the temporal smoothness constraint to obtain initialized 3D non-rigid reconstruction. Then our method runs iteratively to optimize the cost function with spatial-temporal constraints. The trading-off parameters are set as λ1=10−3, λ2=1.

On synthetic face sequences, the results of our method are shown in Fig. 3. We overlap the ground truth shape in red and the our 3D reconstruction in blue. These figures show that our method can reconstruct the 3D object quite accurately. Table 1 shows the quantitative evaluation of our method along with various others methods, including Trajectory Basis (PTA)[8], Metric Projection[4] and Variational method[14]. As shown in the table, our method achieves competitive performance with the state-of-the-art methods. It is worth noting that our method is pretty easy to implement which only involves a series of least squares.

For dense sequences obtained from real videos, the input 2D video tracks and results obtained by our method are shown in Fig. 4. As shown in the figures, our method outputs reasonable results on the Face and Back sequences, while on the challenging Heart sequence that has both large deformations and small rotation, our result seems to be too flat. This emphasizes the importance of a correct rotation matrix.

As stated in previous sections, assuming a smooth 3D surface, our spatial smoothness constraint encourages local smoothness, hence increasing the accuracy and resolution. To evaluate the performance of our method, we added Gaussian noise to the 2D input images, with the standard deviation

σn=rmax{|\bfW|}, where r is the noise ratio ranging from 0.01 to 0.05. Each noise settings are repeated for 5 times to obtain statistical results.

Dense input with outliers: To evaluate the capability of our method in dealing with outliers, we performed experiments with the following settings: a certain amount of points in the video (FP points in total) are set at random positions. The outlier ratio varies at 2%, 4%, 6%, 8% and 10%, respectively. We compute the final 3D error by averaging 5 trials, in order to get a statistically accurate result.

In this paper, we propose a unified framework to dense non-rigid 3D reconstruction, which utilizes both spatial and temporal smoothness to regularize the under-constrained problem. Furthermore, the cost function has been robustified to deal with real world noise and outliers. Our method achieves competitive performance with state-of-the-art dense NRSfM methods. The implementation of our method only involves solving a series of least squares problems, thus making dense NRSfM easy.