The work by Maddah-Ali and Niesen demonstrated the benefits in reducing the transmission rate in a noiseless broadcast network by joint design of caching and delivery schemes. In their setup, each user learns the demands of all other users in the delivery phase. In this paper, we introduce the problem of demand private coded caching where we impose a privacy requirement that no user learns any information about the demands of other users. We provide an achievable scheme and compare its performance using the existing lower bounds on the achievable rates under no privacy setting. For this setting, when N≤ K we show that our scheme is order optimal within a multiplicative factor of 8. Furthermore, when N > K and M≥ N/K, our scheme is order optimal within a multiplicative factor of 4. 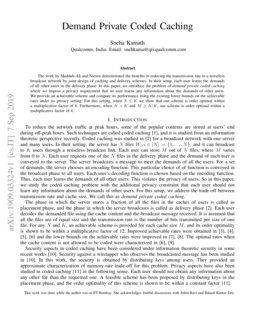 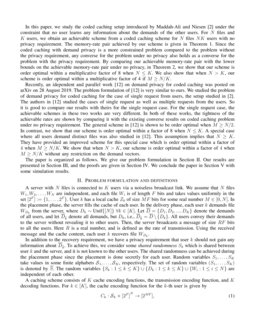 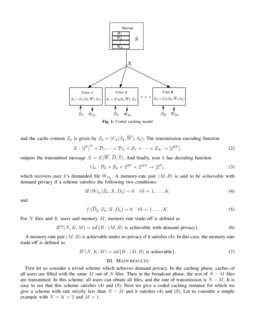 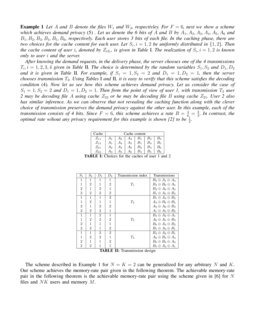 To reduce the network traffic at peak hours, some of the popular contents are stored at users’ end during off-peak hours. Such techniques are called coded caching [Maddah16], and it is studied from an information theoretic perspective recently. Coded caching was studied in [Maddah14] for a broadcast network with one server and many users. In their setting, the server has N files Wi,i∈[N]:={1,…,N}, and it can broadcast to K users through a noiseless broadcast link. Each user can store M out of N files, where M varies from 0 to N. Each user requests one of the N files in the delivery phase and the demand of each user is conveyed to the server. The server broadcasts a message to meet the demands of all the users. For a set of demands, the server chooses an encoding function. This particular choice of of function is conveyed in the broadcast phase to all users. Each user’s decoding function is chosen based on the encoding function. Thus, each user learns the demands of all other users. This violates the privacy of users. So in this paper, we study the coded caching problem with the additional privacy constraint that each user should not learn any information about the demands of other users. For this setup, we address the trade-off between transmission rate and cache size. We call this as demand private coded caching.

The phase in which the server stores a fraction of all the files in the caches of users is called as placement phase, and the phase in which the server broadcasts is called as delivery phase [Maddah14]. Each user decodes the demanded file using the cache content and the broadcast message received. It is assumed that all the files are of equal size and the transmission rate is the number of bits transmitted per size of one file. For any N and K, an achievable scheme is provided for each cache size M, and its order optimality is shown to be within a multiplicative factor of 12. Improved achievable rates were obtained in [Amiri17, Zhang18, Vilardebo18, Yu18] and the lower bounds on the achievable rates were improved in [Ghasemi17, Wang18]. The optimal rates when the cache content is not allowed to be coded were characterized in [Yu18, Wan16].

Security aspects in coded caching have been considered under information theoretic security in some recent works [Sengupta15]. Security against a wiretapper who observes the broadcasted message has been studied in [Sengupta15]. In this work, the security is obtained by distributing keys among users. They provided an approximate characterization of memory-rate trade-off for this problem. Privacy aspects have also been studied in coded caching [Ravindrakumar18] in the following sense. Each user should not obtain any information about any other file than the requested one. A feasible scheme has been proposed by distributing keys in the placement phase, and the order optimality of this scheme is shown to be within a constant factor [Ravindrakumar18].

In this paper, we study the coded caching setup introduced by Maddah-Ali and Niesen [Maddah14] under the constraint that no user learns any information about the demands of the other users. For N files and K users, we obtain an achievable scheme from a coded caching scheme for N files NK users with no privacy requirement. The memory-rate pair achieved by our scheme is given in Theorem 1. Since the coded caching with demand privacy is a more constrained problem compared to the problem without the privacy requirement, any converse for the problem under no privacy also holds as a converse for the problem with the privacy requirement. By comparing our achievable memory-rate pair with the lower bounds on the achievable memory-rate pair under no privacy, in Theorem 2, we show that our scheme is order optimal within a multiplicative factor of 8 when N≤K. We also show that when N>K, our scheme is order optimal within a multiplicative factor of 4 if M≥N/K.

without any restriction on the demand vectors.

The paper is organized as follows. We give our problem formulation in Section II. Our results are presented in Section III, and the proofs are given in Section IV. We conclude the paper in Section V with some simulation results.

A server with N files is connected to K users via a noiseless broadcast link. We assume that N files W1,W2,…,WN are independent, and each file Wi is of length F bits and takes values uniformly in the set [2F]:={1,…,2F}. User k has a local cache Zk of size MF bits for some real number M∈[0,N]. In the placement phase, the server fills the cache of each user. In the delivery phase, each user k demands file WDk from the server, where Dk∼Unif{[N]}∀k∈[K]. Let ¯¯¯¯¯D={D1,D2,...,DK} denote the demands of all users, and let ¯¯¯¯¯D~k denote all demands, but Dk, i.e., ¯¯¯¯¯D~k=¯¯¯¯¯D∖{Dk}. All users convey their demands to the server without revealing it to other users. Then, the server broadcasts a message of size RF bits to all the users. Here R is a real number, and is defined as the rate of transmission. Using the received message and the cache content, each user k recovers file WDk.

In addition to the recovery requirement, we have a privacy requirement that user k should not gain any information about ¯¯¯¯¯D~k. To achieve this, we consider some shared randomness Sk which is shared between user k

and the server, and it is not known to the other users. The shared randomness can be achieved during the placement phase since the placement is done secretly for each user. Random variables

and the cache content Zk is given by Zk=(Ck(Sk,¯¯¯¯¯¯W),Sk). The transmission encoding function

which recovers user k’s demanded file WDk. A memory-rate pair (M,R) is said to be achievable with demand privacy if a scheme satisfies the following two conditions:

For N files and K users and memory M, memory-rate trade-off is defined as

A memory-rate pair (M,R) is achievable under no privacy if it satisfies (4). In this case, the memory-rate trade-off is defined as

First let us consider a trivial scheme which achieves demand privacy. In the caching phase, caches of all users are filled with the same M out of N files. Then in the broadcast phase, the rest of N−M files are transmitted. In this scheme, all users can obtain all files, and the rate of transmission is N−M. It is easy to see that this scheme satisfies (4) and (5). Next we give a coded caching instance for which we give a scheme with rate strictly less than N−M and it satisfies (4) and (5). Let us consider a simple example with N=K=2 and M=1.

be uniformly distributed in

{1,2}. Then the cache content of user i, denoted by ZiSi, is given in Table I. The realization of Si,i=1,2 is known only to user i and the server.

After knowing the demand requests, in the delivery phase, the server chooses one of the 4 transmissions Ti,i=1,2,3,4 given in Table II. The choice is determined by the random variables S1,S2 and D1,D2 and it is given in Table II. For example, if S1=1,S2=2 and D1=1,D2=1, then the server chooses transmission T2. Using Tables I and II, it is easy to verify that this scheme satisfies the decoding condition (4). Now let us see how this scheme achieves demand privacy. Let us consider the case of S1=1,S2=2 and D1=1,D2=1. Then from the point of view of user 1, with transmission T2 user 2 may be decoding file A using cache Z22 or he may be decoding file B using cache Z21. User 2 also has similar inference. As we can observe that not revealing the caching function along with the clever choice of transmission preserves the demand privacy against the other user. In this example, each of the transmission consists of 4 bits. Since F=6, this scheme achieves a rate R=46=23. In contrast, the optimal rate wihout any privacy requirement for this example is shown [Maddah14] to be 12.

Let Rpc(N,K,M) denote the lower convex envelope of the points given in (8).

We have the following corollary.

The rate region given by Rpc(N,K,M) is achievable.

In Theorem 2, we discuss the tightness of the achievable rate region given in Corollary 1.

Iv Proofs of the results

To prove this lemma, we show that for k∈[K],

To prove the theorem, we first give some notations and inequalities. First recall that R∗p(N,K,M) and R∗(N,K,M) denote the optimal rate with privacy and without privacy as defined in (6) and (7), respectively. Rp(N,K,M) is the achievable rate given in Theorem 1. Let RYMA(N,K,M) denote the achievable rate with no privacy using the scheme given in [Yu18] for N files, K users, and memory M. For parameter r2=KMN, it is given by

) is same as the piecewise linear interpolation of adjacent points. So,

Then we have the following inequalities which hold for all M≥0:

(a) follows from the fact that the optimal rate required with demand privacy is larger than that of without privacy, (b) follows since an achievable rate is lower-bounded by the optimal rate, and the inequality RYMA(N,NK,M)≤RMN(N,NK,M) in (c) is shown in [Yu18].

In this case, we get

where the last inequality follows since NK≤1 and M≤1.

In this case, we obtain

Let RMNlin(N,K,M) the region obtained by linearly interpolating the adjacent memory points given in (16). Then it follows from (19) that

We have the following lemma.

For N≤K, the following holds:

We first show that

Since the lower convex envelop of the points RYMA(N,K,M),M∈{N/K,2N/K,…,N} is same as the piecewise linear interpolation of adjacent points [Yu18], we obtain using (28)

Furthermore, it was shown in [Yu18] that