Efficient climate change monitoring and modeling rely on high-quality geospatial and environmental datasets. Due to limitations in technical capabilities or resources, the acquisition of high-quality data for many environmental disciplines is costly. Digital Elevation Model (DEM) datasets are such examples whereas their low-resolution versions are widely available, high-resolution ones are scarce. In an effort to rectify this problem, we propose and assess an EfficientNetV2 based model. The proposed model increases the spatial resolution of DEMs up to 16times without additional information. 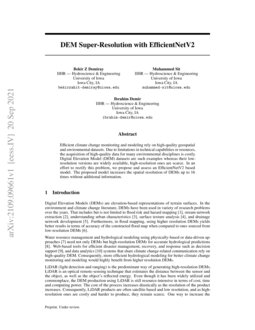 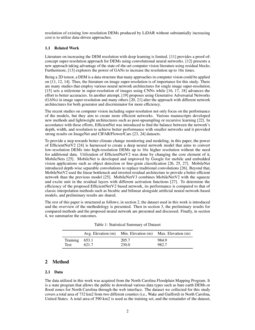 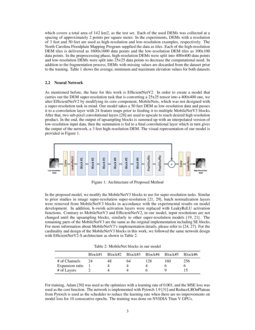 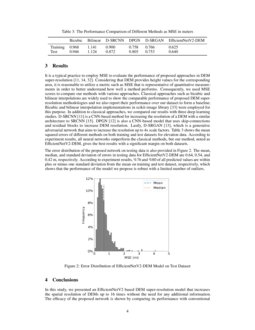 Super-Resolution is the technique to improve the quality of a low-resolu...
Ankur Singh, et al. ∙

LiDAR (light detection and ranging) is the predominant way of generating high-resolution DEMs. LiDAR is an optical remote-sensing technique that estimates the distance between the sensor and the object, as well as the object’s reflected energy. Even though it has been widely utilized and commonplace, the DEM production using LiDAR is still resource-intensive in terms of cost, time and computing power. The cost of the process increases drastically as the resolution of the product increases. Consequently, LiDAR products are often satellite based and low resolution, and as high-resolution ones are costly and harder to produce, they remain scarce. One way to increase the resolution of existing low-resolution DEMs produced by LiDAR without substantially increasing cost is to utilize data-driven approaches.

Literature on increasing the DEM resolution with deep learning is limited.

Demiray et al. (2021) explorers the power of GANs to increase the resolution up to 16x times.

Being a 2D tensor, a DEM is a data structure that many approaches in computer vision could be applied on

Wang et al. (2018a, b) alter the approach with different network architectures for both generator and discriminator for more efficiency.

The recent studies on computer vision including super-resolution not only focus on the performance of the models, but they aim to create more efficient networks. Various manuscripts developed new methods and lightweight architectures such as post-upsampling or recursive learning Wang et al. (2020)

. In accordance with these efforts, EfficientNet was introduced to find the balance between the network’s depth, width, and resolution to achieve better performance with smaller networks and it provided strong results on ImageNet and CIFAR/Flower/Cars

To provide a step towards better climate change monitoring and modeling, in this paper, the power of EfficientNetV2 Tan and Le (2021) is harnessed to create a deep neural network model that aims to convert low-resolution DEMs into high-resolution DEMs up to 16x higher resolution without the need for additional data. Utilization of EfficientNetV2 was done by changing the core element of it, MobileNets Sandler et al. (2018). MobileNet is developed and improved by Google for mobile and embedded vision applications such as object detection or fine-grain classification Howard et al. (2017); Sandler et al. (2018); Howard et al. (2019). MobileNet introduced depth-wise separable convolutions to replace traditional convolutions Howard et al. (2017). Beyond that, MobileNetV2 used the linear bottleneck and inverted residual architecture to provide a better efficient network than the previous model Sandler et al. (2018)

. MobileNetV3 combines MobileNetV2 with the squeeze and excite unit in the residual layers with different activation functions

. To determine the efficiency of the proposed EfficientNetV2 based network, its performance is compared to that of classic interpolation methods such as bicubic and bilinear alongside artificial neural network-based models, and preliminary results are shared.

The rest of this paper is structured as follows; in section 2, the dataset used in this work is introduced and the overview of the methodology is presented. Then in section 3, the preliminary results for compared methods and the proposed neural network are presented and discussed. Finally, in section 4, we summarize the outcomes.

The data utilized in this work was acquired from the North Carolina Floodplain Mapping Program. It is a state program that allows the public to download various data types such as bare earth DEMs or flood zones for North Carolina through the web interface. The dataset we collected for this study covers a total area of 732 km2 from two different counties (i.e., Wake and Guilford) in North Carolina, United States. A total area of 590 km2 is used as the training set, and the remainder of the dataset, which covers a total area of 142 km2, as the test set. Each of the used DEMs was collected at a spacing of approximately 2 points per square meter. In the experiments, DEMs with a resolution of 3 feet and 50 feet are used as high-resolution and low-resolution examples, respectively. The North Carolina Floodplain Mapping Program supplied the data as tiles. Each of the high-resolution DEM tiles is delivered as 1600x1600 data points and the low-resolution DEM tiles as 100x100 data points. In the preprocessing phase, high-resolution DEMs were split into 400×400 data points and low-resolution DEMs were split into 25×25 data points to decrease the computational need. In addition to the fragmentation process, DEMs with missing values are discarded from the dataset prior to the training. Table 1 shows the average, minimum and maximum elevation values for both datasets.

As mentioned before, the base for this work is EfficientNetV2. In order to create a model that carries out the DEM super-resolution task that is converting a 25x25 tensor into a 400x400 one, we alter EfficientNetV2 by modifying its core component, MobileNets, which was not designed with a super-resolution task in mind. Our model takes a 50 feet DEM as low-resolution data and passes it to a convolution layer with 24 feature maps prior to feeding it to multiple MobileNetV3 blocks. After that, two sub-pixel convolutional layers Shi et al. (2016) are used to upscale to reach desired high resolution product. In the end, the output of upsampling blocks is summed up with an interpolated version of low-resolution input data, then the summation is fed to a final convolutional layer which in turn gives the output of the network, a 3 feet high-resolution DEM. The visual representation of our model is provided in Figure 1.

, batch normalization layers were removed from MobileNetV3 blocks in accordance with the experimental results on model development. In addition, h-swish activation layers were replaced with LeakyReLU activation functions. Contrary to MobileNetV3 and EfficientNetV2, in our model, input resolutions are not changed until the upsampling blocks, similarly to other super-resolution models

and ReduceLROnPlateau from Pytorch is used as the scheduler to reduce the learning rate when there are no improvements on model loss for 10 consecutive epochs. The training was done on NVIDIA Titan V GPUs.

It is a typical practice to employ MSE to evaluate the performance of proposed approaches in DEM super-resolution Chen et al. (2016); Xu et al. (2015); Argudo et al. (2018). Considering that DEM provides height values for the corresponding area, it is reasonable to utilize a metric such as MSE that is representative of quantitative measurements in order to better understand how well a method performs. Consequently, we used MSE scores to compare our methods with various approaches. Classical approaches such as bicubic and bilinear interpolations are widely used to show the comparable performance of proposed DEM super-resolution methodologies and we also report their performance over our dataset to form a baseline. Bicubic and bilinear interpolation implementations in scikit-image library Van der Walt et al. (2014) were employed for this purpose. In addition to classical approaches, we compared our results with three deep learning studies. D-SRCNN Chen et al. (2016) is a CNN-based method for increasing the resolution of a DEM with a similar architecture to SRCNN Dong et al. (2015). DPGN Xu et al. (2019) is also a CNN-based model that uses skip-connections and residual blocks to increase DEM resolution. Lastly, D-SRGAN Demiray et al. (2021), which is a generative adversarial network that aims to increase the resolution up to 4x scale factors. Table 3 shows the mean squared errors of different methods on both training and test datasets for elevation data. According to experiment results, all neural networks outperform the classical methods, but our method, noted as EfficientNetV2-DEM, gives the best results with a significant margin on both datasets.

. The mean, median, and standard deviation of errors in testing data for EfficientNetV2-DEM are 0.64, 0.54, and 0.42 m, respectively. According to experiment results, %76 and %80 of all predicted values are within plus or minus one standard deviation from the mean on training and test dataset, respectively, which shows that the performance of the model we propose is robust with a limited number of outliers.

In this study, we presented an EfficientNetV2 based DEM super-resolution model that increases the spatial resolution of DEMs up to 16 times without the need for any additional information. The efficacy of the proposed network is shown by comparing its performance with conventional interpolation methods and artificial neural network-based studies. As it was briefly discussed in the Results section over the preliminary results, the proposed network shows promise by surpassing the compared methods by a significant margin. Considering the EfficientNetV2 based network’s training times are manageable, we believe it provides a comparable alternative to both classical and machine learning-based methods.

As future directions for this approach, since we provided the proof of concept here, we aim to build a larger network to train it with larger DEM datasets. To create a neural network that grasps the correlation between low-resolution and high-resolution DEMs better, another future aspect is to create a custom cost function instead of using MSE.