In this paper, the problem of delay minimization for federated learning (FL) over wireless communication networks is investigated. In the considered model, each user exploits limited local computational resources to train a local FL model with its collected data and, then, sends the trained FL model parameters to a base station (BS) which aggregates the local FL models and broadcasts the aggregated FL model back to all the users. Since FL involves learning model exchanges between the users and the BS, both computation and communication latencies are determined by the required learning accuracy level, which affects the convergence rate of the FL algorithm. This joint learning and communication problem is formulated as a delay minimization problem, where it is proved that the objective function is a convex function of the learning accuracy. Then, a bisection search algorithm is proposed to obtain the optimal solution. Simulation results show that the proposed algorithm can reduce delay by up to 27.3 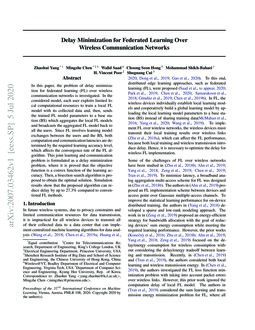 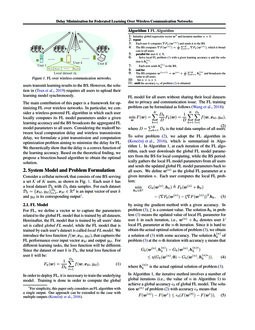 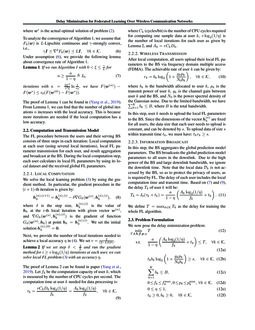 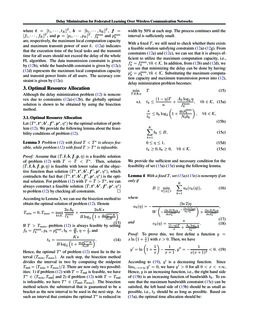 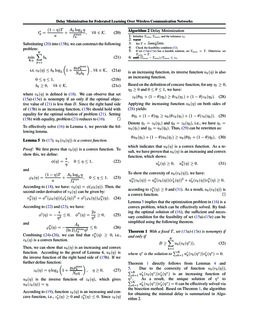 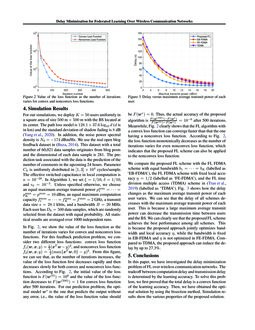 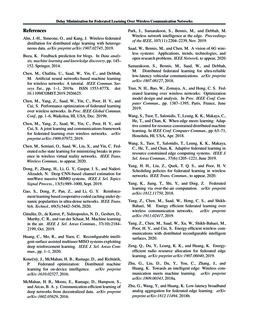 , the authors investigated the FL loss function minimization problem with taking into account packet errors over wireless links. However, this prior work ignored the computation delay of local FL model. The authors in

The main contribution of this paper is a framework for optimizing FL over wireless networks. In particular, we consider a wireless-powered FL algorithm in which each user locally computes its FL model parameters under a given learning accuracy and the BS broadcasts the aggregated FL model parameters to all users. Considering the tradeoff between local computation delay and wireless transmission delay, we formulate a joint transmission and computation optimization problem aiming to minimize the delay for FL. We theoretically show that the delay is a convex function of the learning accuracy. Based on the theoretical finding, we propose a bisection-based algorithm to obtain the optimal solution.

Consider a cellular network that consists of one BS serving a set K of K users, as shown in Fig. 1. Each user k has a local dataset Dk with Dk data samples. For each dataset Dk={xkl,ykl}Dkl=1, xkl∈Rd

is an input vector of user

k and ykl is its corresponding output111For simplicity, this paper only considers an FL algorithm with a single output. Our approach can be extended to the case with multiple outputs (Konečnỳ et al., 2016)..

In order to deploy FL, it is necessary to train the underlying model. Training is done in order to compute the global FL model for all users without sharing their local datasets due to privacy and communication issue. The FL training problem can be formulated as follows (Wang et al., 2018):

where D=∑Kk=1Dk is the total data samples of all users.

where h(n)∗k is the actual optimal solution of problem (2.1).

In Algorithm 1, the iterative method involves a number of global iterations (i.e., the value of n in Algorithm 1) to achieve a global accuracy ϵ0 of global FL model. The solution w(n) of problem (2) with accuracy ϵ0 means that

where w∗ is the actual optimal solution of problem (2).

To analyze the convergence of Algorithm 1, we assume that Fk(w) is L-Lipschitz continuous and γ-strongly convex, i.e.,

Under assumption (6), we provide the following lemma about convergence rate of Algorithm 1.

If we run Algorithm 1 with 0<ξ≤γL for

The proof of Lemma 1 can be found in (Yang et al., 2019). From Lemma 1, we can find that the number of global iterations n increases with the local accuracy. This is because more iterations are needed if the local computation has a low accuracy.

We solve the local learning problem (2.1) by using the gradient method. In particular, the gradient procedure in the (i+1)-th iteration is given by:

Next, we provide the number of local iterations needed to achieve a local accuracy η in (2.1). We set v=2(2−Lδ)δγ.

If we set step δ<2L and run the gradient method for i≥vlog2(1/η) iterations at each user, we can solve local FL problem (2.1) with an accuracy η.

The proof of Lemma 2 can be found in paper (Yang et al., 2019). Let fk be the computation capacity of user k, which is measured by the number of CPU cycles per second. The computation time at user k needed for data processing is:

After local computation, all users upload their local FL parameters to the BS via frequency domain multiple access (FDMA). The achievable rate of user

k can be given by:

where bk is the bandwidth allocated to user k, pk is the transmit power of user k, gk is the channel gain between user k and the BS, and N0 is the power spectral density of the Gaussian noise. Due to the limited bandwidth, we have ∑Kk=1bk≤B, where B is the total bandwidth.

In this step, user k needs to upload the local FL parameters to the BS. Since the dimensions of the vector h(n)k are fixed for all users, the data size that each user needs to upload is constant, and can be denoted by s. To upload data of size s within transmit time tk, we must have: tkrk≥s.

In this step, the BS aggregates the global prediction model parameters. The BS broadcasts the global prediction model parameters to all users in the downlink. Due to the high power of the BS and large downlink bandwidth, we ignore the downlink time. Note that the local data Dk is not accessed by the BS, so as to protect the privacy of users, as is required by FL. The delay of each user includes the local computation time and transmit time. Based on (7) and (9), the delay Tk of user k will be:

We define T=maxk∈KTk as the delay for training the whole FL algorithm.

Although the delay minimization problem (12) is nonconvex due to constraints (12a)-(12b), the globally optimal solution is shown to be obtained by using the bisection method.

According to Lemma 3, we can use the bisection method to obtain the optimal solution of problem (12). Denote

Hence, the optimal T∗ of problem (12) must lie in the interval (Tmin,Tmax). At each step, the bisection method divides the interval in two by computing the midpoint Tmid=(Tmin+Tmax)/2. There are now only two possibilities: 1) if problem (12) with T=Tmid is feasible, we have T∗∈(Tmin,Tmid] and 2) if problem (12) with T=Tmid is infeasible, we have T∗∈(Tmid,Tmax). The bisection method selects the subinterval that is guaranteed to be a bracket as the new interval to be used in the next step. As such an interval that contains the optimal T∗ is reduced in width by 50% at each step. The process continues until the interval is sufficiently small.

With a fixed T, we still need to check whether there exists a feasible solution satisfying constraints (12a)-(12g). From constraints (12a) and (12c), we can see that it is always efficient to utilize the maximum computation capacity, i.e., f∗k=fmaxk,∀k∈K. In addition, from (12b) and (12d), we can see that minimizing the delay can be done by having: p∗k=pmaxk,∀k∈K. Substituting the maximum computation capacity and maximum transmission power into (12), delay minimization problem becomes:

We provide the sufficient and necessary condition for the feasibility of set (15a)-(15e) using the following lemma.

Substituting (20) into (15b), we can construct the following problem:

To effectively solve (16) in Lemma 4, we provide the following lemma.

Proof: We first prove that vk(η) is a convex function. To show this, we define:

Then, we can show that uk(η) is an increasing and convex function. According to the proof of Lemma 4, uk(η) is the inverse function of the right hand side of (15b). If we further define function:

Applying the increasing function uk(η) on both sides of (28) yields:

To show the convexity of uk(vk(η)), we have:

Lemma 5 implies that the optimization problem in (16) is a convex problem, which can be effectively solved. By finding the optimal solution of (16), the sufficient and necessary condition for the feasibility of set (15a)-(15e) can be simplified using the following theorem.

Based on Theorem 1, the algorithm for obtaining the minimal delay is summarized in Algorithm 2.

is in km) and the standard deviation of shadow fading is

8 dB (Yang et al., 2020). In addition, the noise power spectral density is N0=−174 dBm/Hz. We use the real open blog feedback dataset in (Buza, 2014). This dataset with a total number of 60,021 data samples originates from blog posts and the dimensional of each data sample is 281. The prediction task associated with the data is the prediction of the number of comments in the upcoming 24 hours. Parameter Ck

is uniformly distributed in

data samples, which are randomly selected from the dataset with equal probability. All statistical results are averaged over 1000 independent runs.

We compare the proposed FL scheme with the FL FDMA scheme with equal bandwidth b1=⋯=bK (labelled as ‘EB-FDMA’), the FL FDMA scheme with fixed local accuracy η=1/2 (labelled as ‘FE-FDMA’), and the FL time division multiple access (TDMA) scheme in (Tran et al., 2019) (labelled as ‘TDMA’). Fig. 3 shows how the delay changes as the maximum average transmit power of each user varies. We can see that the delay of all schemes decreases with the maximum average transmit power of each user. This is because a large maximum average transmit power can decrease the transmission time between users and the BS. We can clearly see that the proposed FL scheme achieves the best performance among all schemes. This is because the proposed approach jointly optimizes bandwidth and local accuracy η, while the bandwidth is fixed in EB-FDMA and η is not optimized in FE-FDMA. Compared to TDMA, the proposed approach can reduce the delay by up to 27.3%.

In this paper, we have investigated the delay minimization problem of FL over wireless communication networks. The tradeoff between computation delay and transmission delay is determined by the learning accuracy. To solve this problem, we first proved that the total delay is a convex function of the learning accuracy. Then, we have obtained the optimal solution by using the bisection method. Simulation results show the various properties of the proposed solution.