Mobile-edge computing (MEC) has been envisioned as a promising paradigm to meet ever-increasing resource demands of mobile users, prolong battery lives of mobile devices, and shorten request response delays experienced by users. An MEC environment consists of many MEC servers and ubiquitous access points interconnected into an edge cloud network. Mobile users can offload their computing-intensive tasks to one or multiple MEC servers for execution to save their batteries. Due to large numbers of MEC servers deployed in MEC, selecting a subset of servers to serve user tasks while satisfying delay requirements of their users is challenging. In this paper, we formulate a novel delay-energy joint optimization problem through jointly considering the CPU-cycle frequency scheduling at mobile devices, server selection to serve user offloading tasks, and task allocations to the selected servers. To this end, we first formulate the problem as a mixed-integer nonlinear programming, due to the hardness to solve this nonlinear programming, we instead then relax the problem into a nonlinear programming problem that can be solved in polynomial time. We also show how to derive a feasible solution to the original problem from the solution of this relaxed solution. We finally conduct experiments to evaluate the performance of the proposed algorithm. Experimental results demonstrate that the proposed algorithm is promising. 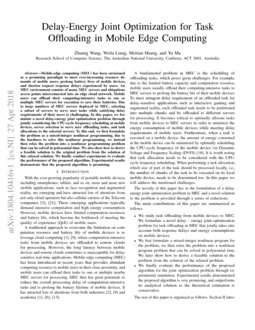 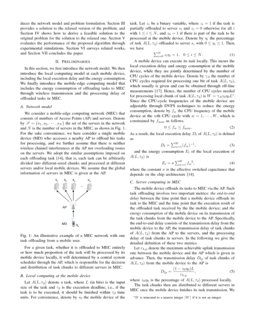 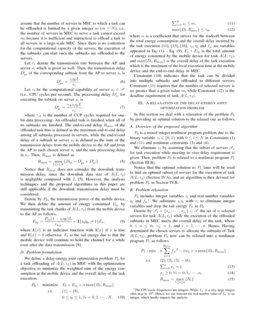 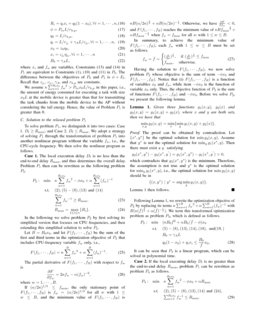 Smart devices have become an indispensable part of our lives and gain in...
Mostafa Hadadian Nejad Yousefi, et al. ∙

With the widespread use of Internet of Things (IoT) devices and the arri...
Siyuan Gu, et al. ∙

With the ever-growing popularity of portable mobile devices, including smartphones, tablets, and so on, more and more new mobile applications, such as face recognition and augmented reality, are emerging and have attracted lots of attentions from not only cloud operators but also cellular carriers of the Telecom companies

[21, 3]. These emerging applications typically demand intensive computation and high energy consumption. However, mobile devices have limited computation resources and battery life, which become the bottleneck of meeting the quality of experience (QoE) of mobile users.

A traditional approach to overcome the limitation on computation resource and battery life of mobile devices is to leverage cloud computing [9, 1], where computation-intensive tasks from mobile devices are offloaded to remote clouds for processing. However, the long latency between mobile devices and remote clouds sometimes is unacceptable for delay-sensitive real-time applications. Mobile-edge computing (MEC) has been introduced in recent years that provides abundant computing resource to mobile users in their close proximity, and mobile users can offload their tasks to one or multiple nearby MEC servers for processing. MEC thus has great potentials to reduce the overall processing delay of computation-intensive tasks and to prolong the battery lifetime of mobile devices. It has attracted lots of attentions from both industries [9, 2] and academia [1, 6, 13].

A fundamental problem in MEC is the scheduling of offloading tasks, which poses great challenges. For example, due to the limited battery capacity and computation resource, mobile users usually offload their computing-intensive tasks to MEC servers to prolong the battery life of their mobile devices. To meet stringent delay requirement of an offloaded task for delay-sensitive applications such as interactive gaming and augmented reality, each offloaded task needs to be partitioned into multiple chunks and be offloaded to different servers for processing. It becomes critical to optimally allocate tasks from mobile devices to MEC servers in order to minimize the energy consumption of mobile devices while meeting delay requirements of mobile users. Furthermore, when a task is executed on a mobile device, the amount of energy consumed at the mobile device can be minimized by optimally scheduling the CPU-cycle frequency of the mobile device via Dynamic Voltage and Frequency Scaling (DVFS) [18]. It is worth noting that task allocation needs to be considered with the CPU-cycle frequency scheduling. When performing a task allocation, which size of part of the task should be processed locally, i.e., the number of chunks of the task to be executed on its local mobile device, needs to be determined too. In this paper we will address the mentioned challenges.

The novelty of this paper lies in the formulation of a delay-energy joint optimization problem in MEC and a novel solution to the problem is provided through a series of reductions.

The main contributions of this paper are summarized as follows.

We consider a mobile-edge computing network (MEC) that consists of numbers of Access Points (AP) and servers. Denote by S={s1,s2,⋯,sN} the set of the servers in the network and N is the number of servers in the MEC, as shown in Fig. 1. For the sake convenience, we here consider a single mobile device (MD) who accesses a nearby AP to offload his tasks for processing, and we further assume that there is neither wireless channel interferences at the AP nor overloading issues on the servers. We adopt the similar assumptions imposed on each offloading task [14], that is, each task can be arbitrarily divided into different-sized chunks and processed at different servers and/or local mobile devices. We assume that the global information of servers in MEC is given at the AP.

For a given task, whether it is offloaded to MEC entirely or how much proportion of the task will be processed by its mobile device locally, it will determined by a central system scheduler through the AP, which is responsible for the decision and distribution of task chunks to different servers in MEC.

Let A(L,τd) denote a task, where L (in bits) is the input size of the task and τd is the execution deadline, i.e., if the task is to be executed, it should be finished within τd time units. For convenience, denote by s0 the mobile device of the task. Let zi

be a binary variable, where

As a result, the local execution delay Dl of A(L,τd) is defined as

and the energy consumption El of the local execution of A(L,τd) is

where the constant κ is the effective switched capacitance that depends on the chip architecture [14].

The task chunks then are distributed to different servers in MEC once the mobile device finishes its task transmission. We assume that the number of servers in MEC to which a task can be offloaded is limited by a given integer m (m≤N), i.e., the number of servers in MEC to serve a task cannot exceed m, because it is inefficient and impractical to offload a task to all servers in a large-scale MEC. Since there is no contention for the computational capacity of the servers, the execution of the subtasks can start once the subtasks are offloaded to the servers.

Let ci be the computational capability of server si∈S (i.e., CPU cycles per second). The processing delay Disc for executing the subtask on server si is

Denote by Ptx the transmission power of the mobile device. We then define the amount of energy consumed Elp by transmitting the task chunks of A(L,τd) from the mobile device to the AP as follows.

where 1{x} is an indicator function with 1{x} if x is true and 1{x}=0 otherwise. Et is the tail energy due to that the mobile device will continue to hold the channel for a while even after the data transmission [8].

We define a delay-energy joint optimization problem P0 for a task offloading of A(L,τd) in MEC with the optimization objective to minimize the weighted sum of the energy consumption at the mobile device and the overall delay of the task execution.

where α is a coefficient that strives for the tradeoff between the total energy consumption and the overall delay incurred by the task execution [11, 16, 13], zi, ηi and fw are variables appeared in Eq. (1) – Eq. (9), El+Elp is the total amount of energy consumed by the mobile device for task A(L,τd), and max{Dl,Rmax} is the overall delay of the task execution which is the maximum of the local execution time at the mobile device and the end-to-end delay in MEC.

Iii A relaxation of the delay-energy joint optimization problem

In this section we deal with a relaxation of the problem P0 by providing an optimal solution to the relaxed one as follows.

Iii-a Overview of the proposed algorithm

We eliminate zi by assuming that the subset of servers Ss for task execution while meeting its over delay requirement is given. Then, problem P0 is relaxed to a nonlinear program P1 (Section III.B).

Notice that the optimal solution to P1 later will be used to find an optimal subset of servers for the execution of task A(L,τd) (Section IV.A), and an algorithm is then devised for problem P0 in Section IV.B.

Denote by Ss={sj1,⋯,sjn}⊂S the set of n selected servers for task A(L,τd) while the execution of the offloaded subtasks in MEC meets the overall delay of the task, where 0<n≤m, zji=1, and i=1,⋯,n. Hence, Having determined the chosen servers to allocate the subtasks of Task A(L,τd), problem P0 now can be relaxed into a nonlinear program P1 as follows.

To solve problem P1, we distinguish it into two cases: Case 1. Dl≥Rmax; and Case 2. Dl≤Rmax. We adopt a strategy of solving P1 through the transformation of problem P1 into another nonlinear program without the variable fw, i.e., the CPU-cycle frequency. We then solve the nonlinear program as follows.

Case 1. The local execution delay Dl is no less than the end-to-end delay Rmax, and thus determines the overall delay. Problem P1 then can be rewritten as the following problem P2.

In the following we solve problem P2 by first solving its simplified version that focuses on CPU frequencies, and then extending this simplified solution to solve P2.

Let B=B0x0, and let F(f1,⋯,fB) be the sum of the first and third terms in the optimization objective of P2 that includes CPU-frequency variable fw only, i.e.,

The partial derivative of F(f1,⋯,fB) with respect to fw is

In summary, to achieve the minimum value of F(f1,⋯,fB), each fw with 1≤w≤B must be set as follows.

Following Lemma 1, we rewrite the optimization objective of P2 by replacing its terms κ∑Bw=1fw2+α∑Bw=1(fw)−1 with B(κ(¯f)23+α(¯f)−13). We term this transformed optimization problem as problem P3, which is defined as follows.

It can be seen that P3

is a linear program, which can be solved in polynomial time.

Case 2. If the local executing delay Dl is no greater than the end-to-end delay Rmax, problem P1 can be rewritten as problem P4 as follows.

We adopt the similar strategy for solving P4 as we did for P2. It can be seen the objective function of P2 consists of two functions: function κB0x0∑w=1fw2 has variables fw and x0; and function −ϕx0+αRmax has variables xi as Rmax is a function of xi with 0≤i≤n.

By Jensen’s inequality (see the appendix), we then have

Problem P5 is then derived as follows, by replacing ∑Bw=1fw2 in P4 with B3/R2max.

The rest is to solve the nonlinear program problem – P5. Before we proceed, we have the following lemma.

If f(⋅) is a real-valued function of two variables of x and y, which is defined whenever x∈X and y∈Y and X and Y are two domains. Then

We show the claim by contradiction. It can be seen that

Assuming that {x∗,y∗} is the optimal solution of minx∈X,y∈Yf(x,y). That is,

Suppose the claim (34) does not hold, and we assume that

This leads to a contradiction. The lemma thus follows. ∎

The range of Rmax with respect to x0 is

Rmax reaches the minimum ¯Q(1−x0) when

Since qnx′n<qnxn, the value of minmax1≤i≤n{qixi} under X′ is min{qn−1xn−1,qnx′n}<qnxn. X′ is better than X. This leads to a contradiction that X is the optimal solution to the problem. Therefore,

minRmaxH(x0,Rmax) is equivalent to function h(x), where h(x) is defined as follows.

We now find the minimum value of h1(x). The derivative of h1(x) is

We define h4(y) as follows.