Motivated by design and performance challenges stemming from emerging applications in random-access networks, we focus on the performance of a dynamic two-user slotted-time ALOHA network with a general queue-dependent transmission policy. At the beginning of each slot, each user transmits a packet with a probability that depends on the number of stored packets at both user queues. If both stations transmit at the same slot a collision occurs, and both packets must be retransmitted in a later slot. Each user has external bursty arrivals that are stored in their infinite capacity queues. Arrival processes are independent of each other, but depend also on the state of the network at the beginning of a slot. In such a network of interacting queues, when a user transmits a packet, it causes interference to the nearby user and decreases its rate of communication. Each user is aware of the status of the network, and accordingly reconfigures its transmission parameters to improve the network performance. We investigate the ergodicity conditions and use the generating function approach to investigate the queueing delay. Generating functions for the steady-state distribution are obtained by solving a finite system of linear equations and a functional equation with the aid of the theory of Riemann-Hilbert boundary value problems. 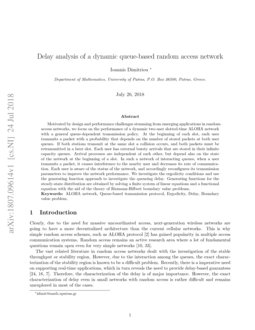 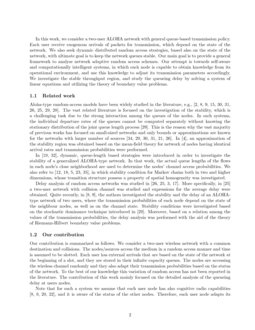 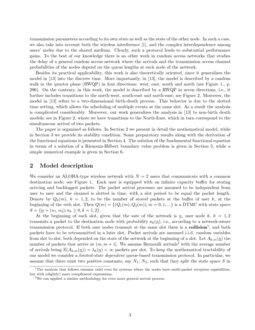 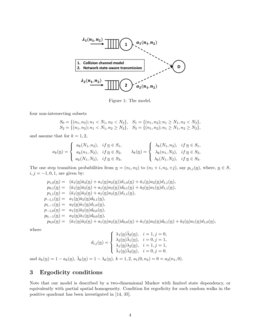 Performance Analysis of a Cooperative Wireless Network with Adaptive Relays: A Network-Level Study

In this work, we investigate the stability region, the throughput perfor...
Ioannis Dimitriou, et al. ∙

Age of Information Performance of Multiaccess Strategies with Packet Management

The effect of signals on stability, throughput region, and delay in a tw...
Ioannis Dimitriou, et al. ∙

Clearly, due to the need for massive uncoordinated access, next-generation wireless networks are going to have a more decentralized architecture than the current cellular networks. This is why simple random access schemes, such as ALOHA protocol [2] has gained popularity in multiple access communication systems. Random access remains an active research area, and many fundamental questions remain open even for very simple and small-sized networks [10, 33], mainly due to the strong interaction among the wireless nodes.

The vast related literature in random access networks dealt with the investigation of the stability region. However, due to the strong interaction among the queues, the exact characterization of the stability region remains a challenging task. A much more challenging task in such networks is the investigation of the queueing delay, for which the there are very few analytical results even for small random access networks, e.g., [8, 9, 25, 26]. Recently, there is a imperative need on supporting real-time applications, which in turn reveals the need to provide delay-based guarantees [24, 16, 7]. Therefore, the characterization of the delay is of major importance.

In this work, we consider a two-user ALOHA network with general queue-based transmission policy. Each user receive exogenous arrivals of packets for transmission, which depend on the state of the network. We also seek dynamic distributed random access strategies, based also on the state of the network, with ultimate goal is to keep the network queues stable, and more importantly to derive expressions for the queueing delay. Our main goal is to provide a general framework to analyse network adaptive random access schemes. Our attempt is towards self-aware and computationally intelligent systems, in which each node is capable to obtain knowledge from its operational environment, and use this knowledge to adjust its transmission parameters accordingly. We investigate the stable throughput region, and study the queueing delay by solving a system of linear equations and utilizing the theory of boundary value problems.

Aloha-type random-access models have been widely studied in the literature, e.g., [2, 8, 9, 15, 30, 31, 26, 25, 29, 28]. The vast related literature is focused on the investigation of the stability, which is a challenging task due to the strong interaction among the queues of the nodes. In such systems, the individual departure rates of the queues cannot be computed separately without knowing the stationary distribution of the joint queue length process [29]. This is the reason why the vast majority of previous works has focused on small-sized networks and only bounds or approximations are known for the networks with larger number of sources [34, 29, 30, 31, 21, 26]. In [4], an approximation of the stability region was obtained based on the mean-field theory for network of nodes having identical arrival rates and transmission probabilities were performed.

In [19, 32], dynamic, queue-length based strategies were introduced in order to investigate the stability of a generalized ALOHA-type network. In that work, the actual queue lengths of the flows in each node’s close neighborhood are used to determine the nodes’ channel access probabilities. We also refer to [12, 18, 5, 23, 35]

, in which stability condition for Markov chains both in two and higher dimensions, whose transition structure possess a property of spatial homogeneity was investigated.

Delay analysis of random access networks was studied in [26, 25, 3, 17]. More specifically, in [25] a two-user network with collision channel was studied and expressions for the average delay were obtained. Quite recently, in [8, 9], the authors investigated the stability and the delay of an ALOHA-type network of two users, where the transmission probabilities of each node depend on the state of the neighbour nodes, as well as on the channel state. Stability conditions were investigated based on the stochastic dominance technique introduced in [29]. Moreover, based on a relation among the values of the transmission probabilities, the delay analysis was performed with the aid of the theory of Riemann-Hilbert boundary value problems.

Our contribution is summarized as follows. We consider a two-user wireless network with a common destination and collisions. The nodes/sources access the medium in a random access manner and time is assumed to be slotted. Each user has external arrivals that are based on the state of the network at the beginning of a slot, and they are stored in their infinite capacity queues. The nodes are accessing the wireless channel randomly and they also adapt their transmission probabilities based on the status of the network. To the best of our knowledge this variation of random access has not been reported in the literature. The contribution of this work mainly focused on the detailed analysis of the queueing delay at users nodes.

Note that for such a system we assume that each user node has also cognitive radio capabilities [8, 9, 20, 22], and it is aware of the status of the other nodes. Therefore, each user node adapts its transmission parameters according to its own state as well as the state of the other node. In such a case, we also take into account both the wireless interference [1], and the complex interdependence among users’ nodes due to the shared medium. Clearly, such a protocol leads to substantial performance gains. To the best of our knowledge there is no other work in random access networks that studies the delay of a general random access network where the arrivals and the transmission access channel probabilities of the nodes depend on the queue lengths at each node of the network.

Besides its practical applicability, this work is also theoretically oriented, since it generalizes the model in [13] into the discrete time. More importantly, in [13], the model is described by a random walk in the quarter plane (RWQP) in four directions: west, east, south and north (see Figure 1., p. 296). On the contrary, in this work, the model is described by a RWQP in seven directions, i.e., it further includes transitions to the north-west, south-east and north-east; see Figure 2. Moreover, the model in [13] refers to a two-dimensional birth-death process. This behavior is due to the slotted time setting, which allows the scheduling of multiple events at the same slot. As a result the analysis is complicated considerably. Moreover, our work generalizes the analysis in [13] to non-birth death models; see in Figure 2, where we have transitions to the North-East, which in turn correspond to the simultaneous arrival of two packets.

We consider an ALOHA-type wireless network with N=2 users that communicate with a common destination node; see Figure 1. Each user is equipped with an infinite capacity buffer for storing arriving and backlogged packets. The packet arrival processes are assumed to be independent from user to user and the channel is slotted in time, with a slot period to be equal the packet length. Denote by Qk(m), k=1,2, to be the number of stored packets at the buffer of user k, at the beginning of the mth slot. Then Q(m)={(Q1(m),Q2(m)),m=0,1,...} is a DTMC with state space S={n––=(n1,n2);nk≥0,k=1,2}.

At the beginning of each slot, given that the sate of the network is n––, user node k, k=1,2 transmits a packet to the destination node with probability ak(n––), i.e., according to a network-aware transmission protocol. If both user nodes transmit at the same slot there is a collision222The analysis that follows remains valid even for systems where the nodes have multi-packet reception capabilities, but with (slightly) more complicated expressions.

, and both packets have to be retransmitted in a later slot. Packet arrivals are assumed i.i.d. random variables from slot to slot, both depended on the state of the network at the beginning of a slot. Let

Ak,m(n––) the number of packets that arrive at (m,m+1]. We assume Bernoulli arrivals333We can applied a similar methodology for even more general arrival process. with the average number of arrivals being E(Ak,m(n––))=λk(n––)<∞ packets per slot.

To keep the mathematical tractability of our model we consider a limited-state dependent queue-based transmission protocol. In particular, we assume that there exist two positive constants, say N1, N2, such that they split the state space S in four non-intersecting subsets

Note that our model is described by a two-dimensional Markov with limited state dependency, or equivalently with partial spatial homogeneity. Condition for ergodicity for such random walks in the positive quadrant has been investigated in [14, 35].

Then, the following theorem provides necessary and sufficient conditions for ergodicity [14]. For a similar approach, see [35]444Note also that for N1=N2=1, Theorem 1 coincides with the well known ergodicity result presented in Theorem 3.3.1 in [11].

The proof is based on the construction of quadratic Lyapunov functions following the lines in [14].

Assume hereon that the system is stable, and let the stationary probabilities

Then, the equilibrium equations are given below

By repeating the procedure, we can obtain hn1(y), as a function of h0(y). In particular,

We now focus on the region S3 and denote,