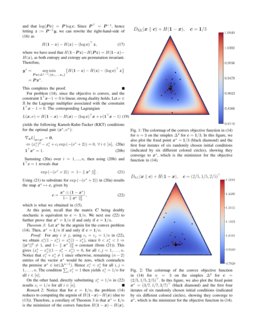 e1,…,en in Rn, and int(Δn−1) denotes its interior. The state vector x=(x1,…,xn)⊤ models the opinion of n individuals in a social network on a particular issue. The recursion index k=0,1,... codifies a sequence of issues. The parameter vector c∈int(Δn−1)

is the Perron-Frobenius left eigenvector of an

n×n row stochastic, zero-diagonal, irreducible222A nonnegative matrix is irreducible if its associated digraph is strongly connected. The digraph associated with an n×n nonnegative matrix is constructed by adding a directed edge from node i to j, where i,j=1,...,n, provided the (i,j)-th element of the matrix is positive. matrix C, typically referred to as the “relative influence” or “relative interaction matrix”. As in the original DeGroot-Friedkin model, we will assume that the matrix C is constant. Under the stated structural assumptions on matrix C, the vector c satisfies (see e.g., [1, Lemma 2.3, part (i)]) 0<ci≤1/2 for all i=1,…,n. Intuitively, the elements of the matrix C model the relative influence of an individual’s social network in her opinion, and they affect the opinion dynamics via vector c. Thus, the DeGroot-Freidkin map describes how the opinion of a group of individuals evolve over a sequence of issues accounting that social interactions influence opinion.

for k=0,1,…, where the symbol ⊘ denotes element-wise division, and 1 denotes the column vector of ones. The explicit form of the recursion appeared first in [1, Lemma 2.2], and was proposed as a combination of the DeGroot model [2] and the Friedkin’s model of reflected appraisal [3] in the evolution of social power (therefore, the name “DeGroot-Friedkin model”). Various extensions of the basic DeGroot-Friedkin model have appeared in [4, 5, 6].

We can interpret the vertices of the simplex as “autocratic” fixed points. The fixed point x∗ in the interior of the simplex, is purely “democratic” when it is equal to 1/n, which happens if and only if C is doubly stochastic. In general, the location of x∗∈int(Δn−1) depends on the parameter vector c (or equivalently, on the matrix C).

The results mentioned in the preceding two paragraphs were derived in [1] through Lyapunov analysis. The purpose of this paper is to present a variational interpretation of the opinion dynamics for the DeGroot-Friedkin map. Specifically, we show that the DeGroot-Friedkin map can be viewed as mirror descent of a convex function on the standard simplex with the associated Bregman divergence being equal to the generalized Kullback-Leibler divergence. On one hand, our development provides novel geometric insight for the opinion dynamics on standard simplex. On the other hand, it answers the natural question: what is the collective utility (i.e., “social welfare”) that the DeGroot-Friedkin map elicits over a given influence network?

This paper is organized as follows. Section II provides an expository overview of mirror descent. Our main results are collected in Section III. Several implications of our variational interpretation are provided in Section IV. Section V concludes the paper.

We denote the entropy of a vector p∈Δn−1 as H(p):=−∑ni=1pilogpi, and the Kullback-Leibler divergence between p,q∈Δn−1 as DKL(p∥q):=∑ni=1pilog(pi/qi). As is well-known, both H(p) and DKL(p∥q) are ≥0. In this paper, the operators log(⋅) and exp(⋅) are to be understood element-wise. We use the symbols ⊙ and ⊘ to denote element-wise multiplication and division, respectively. Given a vector α=(α1,…,αn)⊤, by diag(α) we mean a diagonal matrix with diagonal elements being equal to the entries of the vector α. The notations dom(⋅) and range(⋅) stand for domain and range of a function, respectively; cl(⋅) stands for closure of an open set; bdy(⋅) stands for boundary of a closed set. By closure cl(⋅) of a function, we mean that its epigraph is a closed set. We use ⟨⋅,⋅⟩ to denote the standard Euclidean inner product. The Legendre-Fenchel conjugate [7, Section 12] of a function θ:Rn↦R, is θ∗:Rn↦R given by

(i.e., ϕ(⋅) is a convex function; X⊂Rn is a convex set), the projected gradient descent with constant step-size h>0 is a two-step algorithm, given by

where the Euclidean projection operator proj∥⋅∥2X(η):=argminξ∈X12∥ξ−η∥22, the subgradient gk∈∂ϕ(x(k)) (the subdifferential), and k=0,1,…. The mirror descent generalizes (4) by introducing the so-called mirror map and its associated Bregman divergence [9].

(Mirror map) Given the convex optimization problem (4), suppose ψ(⋅) is a differentiable, strictly convex function on an open convex set dom(ψ)⊆Rn, i.e., ψ:dom(ψ)↦R, such that the constraint set X⊂cl(dom(ψ)), range(∇ψ)=Rn, and ∥∇ψ∥2→+∞ as x→bdy(cl(dom(ψ))). Then ψ(⋅) is called a mirror map.

and can be interpreted as the error at x due to first order Taylor approximation of ψ(⋅) about y. In general, Dψ is non-symmetric and hence not a metric.

With Definitions 1 and 2 in place, the mirror descent algorithm associated with the mirror map ψ(⋅) is a modified version of (4), given by

where the Bregman projection operator , and k=0,1,….

The main insight behind (6) is the following. As the subgradient gk is an element of the dual space, the subtraction in (4a) does not make sense unless the decision variable x in (3) belongs to a Hilbert space (since the dual space of a Hilbert space is isometrically isomorphic to the Hilbert space, thanks to the Riesz representation theorem [13, Ch. 4]). To circumvent this issue, (6a) takes an element from the primal space to the dual space via x(k)↦∇ψ(x(k)), performs the gradient update in the dual space, and maps back the updated value y(k+1) in the primal space. To ensure that y(k+1) be in the set X, the Bregman projection is performed in (6b). The choice of the mirror map is usually guided by the geometry of the set X.

Of particular importance to us, is the choice ψ(x)≡−H(x)=∑ni=1xilogxi (the negative entropy), dom(ψ)=Rn>0, resulting in

the generalized Kullback-Leibler divergence, named so because it equals DKL(x∥y) when x,y∈Δn−1. In the opinion dynamics context, we set X≡Δn−1∖{e1,…,en}, and seek an equivalence between (1) and (3). Per Definition 1, notice that ψ(x)≡−H(x) is a valid mirror map since it is strictly convex and differentiable; furthermore, X≡Δn−1∖{e1,…,en}⊂cl(dom(ψ))=Rn≥0, range(∇ψ)=range(1+logx)=Rn, and ∥∇ψ∥2→+∞ as x→bdy(cl(dom(ψ))). Using (7), direct computation gives

where k=0,1,…. Notice that for x∈Δn−1∖{e1,…,en}, the map (1) is indeed in the form of a generalized Kullback-Leibler projection for a positive vector c⊘(1−x) onto the standard simplex. We next develop this correspondence between (1) and (9).

In order to associate a variational problem of the form (3) with the DeGroot-Friedkin map, we transcribe (1) in the form (9) by setting

. Like entropy, the extropy is permutation invariant, achieves maximum at the uniform distribution

Theorem 1 and its preceding discussion reveal that computing the fixed point x∗∈int(Δn−1) for the DeGroot-Friedkin map is equivalent to solving a convex optimization problem over Δn−1∖{e1,…,en}. We summarize this in the following proposition.

An immediate corollary of the above is that the fixed point x∗∈int(Δn−1) is unique and its basin of attraction is Δn−1∖{e1,…,en}. These facts were established in [1] via non-smooth Lyapunov analysis.

Problem (14) minimizes the extropy (i.e., entropy of complimentary opinion) while staying close to the vector c in Kullback-Leibler sense. This can be interpreted as follows. The entries of c, termed as “eigenvector centrality scores”, reveal social influence of an individual. The entries of the argmin x∗ reveal the individual’s social power. The Kullback-Leibler term in the objective in (14) implies that an individual’s social power tends to be close to her social influence. The extropy term promotes collective non-uniformity in complimentary opinion, i.e., penalizes the “spread” of the complimentary opinion (1−x) for the group. The overall objective in (14) encapsulates the combined effect of these two tendencies.

For a given c∈int(Δn−1), let x∗ be the argmin for the convex problem (14). For any n×n permutation matrix P, let

We start by noting that

where we have used that H(1−Pz)−H(Pz)=H(1−z)−H(z), as both entropy and extropy are permutation invariant. Therefore,

At this point, recall that the matrix C being doubly stochastic is equivalent to c=1/n. We next use (22) to further prove that x∗=1/n if and only if c=1/n.

We now provide some numerical evidence to help visualize the development so far. In Fig. 1, we plot the colormap of the objective function in (14) for n=3 on the simplex Δ2 for c=1/3. This colormap suggests that the objective function achieves minimum at x=1/3, which is in accordance with Theorem 3. In the same figure, we overlay the fixed point x∗=1/3 (black diamond) and the first few iterates of six randomly chosen initial conditions (indicated by six different colored circles) for recursion (1), showing that all the iterates converge to x∗, which is indeed the minimum of DKL(x∥c)+H(1−x) over the simplex.

Likewise, in Fig. 2, we plot the colormap of the objective function in (14) on the simplex Δ2 for c=(2/5,1/5,2/5)⊤. In this case, the fixed point x∗=(3/7,1/7,3/7)⊤ (black diamond), which can be verified by direct substitution in (1). Again, in Fig. 2, we overlay the first few iterates of six randomly chosen initial conditions (indicated by six different colored circles) for recursion (1) showing that all the iterates converge to x∗, which is indeed the minimum of DKL(x∥c)+H(1−x) over the simplex.

Next, we collect some consequences which follow from our variational interpretation.

A consequence of identifying ϕ(⋅) with the mirror descent is that we can express the (transient) DeGroot-Friedkin iterates via proximal recursion:

where k=0,1,…, and gk≡g(x=x(k)) is given by (11). This proximal recursion perspective of mirror descent is due to [12]. One can view (23) as minimizing the local linearization of ϕ while not being too far (in Kullback-Leibler sense) from the previous iterate.

where as before, ν∈R is the Lagrange multiplier associated with the constraint 1⊤x−1=0.

where we used (2) to derive (25b). Performing the unconstrained minimization in (25c), we obtain

M. For an optimization problem of the form

the natural gradient descent on (M,M) with fixed step size h>0, is given by

where projDψ∗X∗(λ):=argminμ∈X∗Dψ∗(μ,λ), and X∗:={μ∈M∣μ=∇xψ(x),x∈X}. Thus, in general, the mirror descent (6) is equivalent to the projected natural gradient descent (30).

The Lemma below helps in computing the projection in (32).

Substituting back in (34) followed by algebraic simplification results

Since μ=1+logx, hence the natural gradient recursion (35) is exactly the DeGroot-Friedkin map (1).

The equivalence between the mirror descent (9) and the natural gradient descent (31) allows us to interpret the DeGroot-Friedkin map as steepest descent of ϕ(∇μψ∗(μ))=DKL(exp(μ−1)∥c)+H(1−exp(μ−1)) along the manifold (M,diag(exp(μ−1))), where M is the image of X≡Δn−1∖{e1,…,en}⊂dom(ψ)≡Rn>0 under map ∇xψ=1+logx. In other words, the steepest descent occurs on the space of (shifted) log-likelihood.