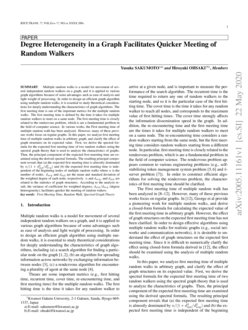 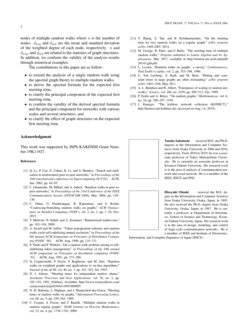 A non-backtracking random walk on a graph is a random walk where, at eac...
Dario Fasino, et al. ∙

Robotic Surveillance Based on the Meeting Time of Random Walks

This paper analyzes the meeting time between a pair of pursuer and evade...
Xiaoming Duan, et al. ∙

We prove new results on lazy random walks on finite graphs. To start, we...
Roberto I. Oliveira, et al. ∙

One of the most important properties of high dimensional expanders is th...
Roy Gotlib, et al. ∙

How to Spread a Rumor: Call Your Neighbors or Take a Walk?

Multiple random walks is a model for movement of several independent random walkers on a graph, and it is applied to various graph algorithms because of some advantages such as ease of analysis and light weight of processing. In order to design an efficient graph algorithm using multiple random walks, it is essential to study theoretical considerations for deeply understanding the characteristics of graph algorithms, including (a) a search algorithm for finding a particular node on the graph [Lv02:MRW, Gkantsidis:04:RW], (b) an algorithm for spreading information across networks by exchanging information between nodes [Dutta15:Coalescing], (c) a rendezvous algorithm for encountering a plurality of agent at the same node [Metivier00:Rendezvous].

This work was supported by JSPS KAKENHI Grant Number 19K11927.