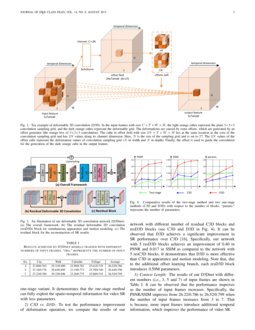 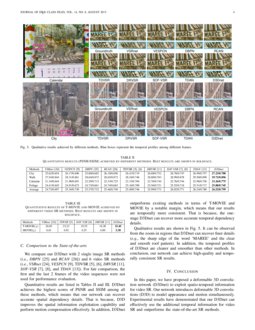 Video super-resolution (SR) aims at recovering high-resolution (HR) images from low-resolution (LR) video sequences. This technique has been widely employed in many applications such as video surveillance [6] and high-definition devices [2, 4]. Since multiple images provide additional information in temporal dimension, it is important to fully use the spatio-temporal dependency to enhance the video SR performance.

first performed rectified optical flow alignment and then fed these aligned LR frames to a temporal adaptive neural network to reconstruct an SR frame in an optimal temporal scale. Wang

To achieve motion compensation in a unified stage, Tian et al. [17] proposed a temporally deformable alignment network (TDAN) for video SR using deformable convolutions. Specifically, neighboring frames are first aligned to the reference frame by deformable convolutions. Afterwards, these aligned frames are fed to CNNs to generate SR results. Wang et al. [22] proposed an enhanced deformable video restoration network, namely EDVR. The pyramid, cascading and deformable (PCD) alignment module of EDVR can handle complicated and long-range motion and therefore improves the performance of video SR. Xiang et al. [23] proposed a deformable ConvLSTM method to exploit superior temporal information for video sequences with large motion. However, these aforementioned methods share a common issue. That is, feature extraction is performed within the spatial domain and motion compensation is performed within the temporal domain. As shown in Fig. 1 (a), these two steps are orthogonal. Consequently, the spatio-temporal information within a video sequence cannot be fully used and the coherence of SR video sequences is reduced.

In this paper, we propose a deformable 3D convolution network (D3Dnet) for video SR. Specifically, LR video sequences are first sent to C3D to generate features, which are further fed to 5 cascaded residual D3D (resD3D) blocks to exploit spatio-temporal information and achieve motion compensation, as shown in Fig. 1 (b). Then, the compensated LR features are fused by a bottleneck layer. Finally, the fused LR feature is fed to 6 residual blocks to reconstruct the SR reference frame. Extensive experiments have demonstrated the superiority of our D3Dnet.

The plain C3D [18] is achieved in the following two steps: 1) 3D convolution kernel sampling on input features x; 2) Weighted summation of sampled values by function w. To be specific, the features passed through a regular 3×3×3 convolution kernel with a dilation of 1 can be formulated as:

Modified from C3D, D3D can enlarge the spatial receptive field with learnable offsets, which improves the appearance and motion modeling capability. As illustrated in Fig. 2, the input feature with size C×T×W×H is first fed to C3D to generate offsets with size 2N×T×W×H. These offsets have the same spatio-temporal resolution as the input feature while the channel dimension is set to 2N for 2D spatial deformable convolutions. More specifically, the light cube in the middle offset field lies at the same location as the core of the plain C3D kernel. Numerically, the offset cube has 2N channels and its values represent the deformation of the convolution sampling grid in width ΔW and height ΔH. Then, the learned offsets are used to guide the deformation of the plain C3D sampling grid (i.e., the light orange cubes in the input feature) to generate a D3D sampling grid (i.e., the dark orange cubes in the input feature). Finally, the D3D sampling grid is employed to produce the output feature. In summary, D3D is formulated as:

where offsets Δpn,t=G(t,⋅,⋅) and t∈[−⌊T/2⌋,⌊T/2⌋]. Here, T represents the temporal length of sampling grid and is set to 3. ⌊⋅⌋ represents round down operation. The offsets are generally fractional. Following [3, 26]

, we use bilinear interpolation to generate exact values.

For training, we employed the Vimeo-90k dataset [24] as the training set with a fixed resolution of 448×256. To generate training data, all video sequences were downsampled by 4 times to produce their LR counterparts for 4× SR. Then, we randomly cropped these LR images into patches of size 32×32

with a stride of

20. Their corresponding HR images were cropped into patches accordingly. We followed [20, 19] to augment the training data by random flipping and rotation.

[14] to evaluate the consistency quality.

All experiments were implemented by Pytorch with an Nvidia RTX 2080Ti GPU. The networks were trained using the Adam method

and halved for every 6 epochs. We stopped the training after 35 epochs.

To test the performance improvement of deformation operation, we compare the results of our network with different number of residual C3D blocks and resD3D blocks (see C3D and D3D in Fig. 4). It can be observed that D3D achieves a significant improvement in SR performance over C3D [18]. Specifically, our network with 5 resD3D blocks achieves an improvement of 0.40 in PSNR and 0.017 in SSIM as compared to the network with 5 resC3D blocks. It demonstrates that D3D is more effective than C3D in appearance and motion modeling. Note that, due to the additional offset learning branch, each resD3D block introduces 0.50M parameters.

Iii-C Comparison to the State-of-the-arts

Quantitative results are listed in Tables II and III. D3Dnet achieves the highest scores of PSNR and SSIM among all these methods, which means that our network can recover accurate spatial dependency details. That is because, D3D improves the spatial information exploitation capability and perform motion compensation effectively. In addition, D3Dnet outperforms exsiting methods in terms of T-MOVIE and MOVIE by a notable margin, which means that our results are temporally more consistent. That is because, the one-stage D3Dnet can recover more accurate temporal dependency details.

Qualitative results are shown in Fig. 5. It can be observed from the zoom-in regions that D3Dnet can recover finer details (e.g., the sharp edge of the word ‘MAREE’ and the clear and smooth roof pattern). In addition, the temporal profiles of D3Dnet are clearer and smoother than other methods. In conclusion, our network can achieve high-quality and temporally consistent SR results.

In this paper, we have proposed a deformable 3D convolution network (D3Dnet) to exploit spatio-temporal information for video SR. Our network introduces deformable 3D convolutions (D3D) to model appearance and motion simultaneously. Experimental results have demonstrated that our D3Dnet can effectively use the additional temporal information for video SR and outperforms the state-of-the-art SR methods.