We present previously unknown solutions to the 3D Gross-Pitaevskii equation describing atomic Bose-Einstein condensates. This model supports elaborate patterns, including excited states bearing vorticity. The discovered coherent structures exhibit striking topological features, involving combinations of vortex rings and multiple, possibly bent vortex lines. Although unstable, many of them persist for long times in dynamical simulations. These solutions were identified by a state-of-the-art numerical technique called deflation, which is expected to be applicable to many problems from other areas of physics. 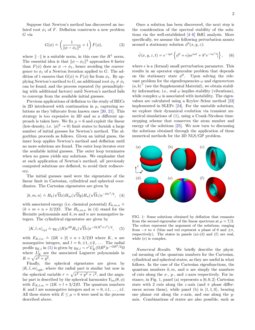 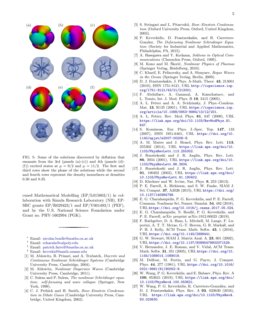 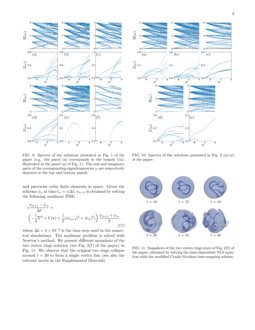 Solutions emanating from the 1st excited state. Deflation identified three solutions emanating from the first excited state at μ=5/2. Fig. 6(a) shows a |1,0,0⟩ Cartesian state with one cut along the x-axis. Fig. 6(b) shows |0,1,0⟩cyl corresponding to a single vortex line with topological charge l=1. The rotations of these solutions along the x, y, and z axes such as the |0,1,0⟩ and |0,0,1⟩ Cartesian states are also obtained by deflation but are not reported.

Bifurcation diagram of the 2nd excited states. As discussed in the paper, the steady-state solutions to the nonlinear Schrödinger equation are identified by the deflation method at μ=6. The branches are then continued backward in μ down to the linear limit by a standard zero-order continuation method (Seydel, 2010, §4.4.2). A typical example of a relevant solution is shown in Fig. 6(c) and represents a so-called Chladni soliton, previously identified in cylindrical geometry in Mateo and Brand (2014, 2015). We present the bifurcation diagram of the solutions emanating from the second excited state in Fig. 7. Our diagnostic functional is the total number of atoms (or squared L2 norm):

The inset panel in the top-left corner of Fig. 7 uses the atom number difference ΔN between the branches 2(a) and 2(a)* to illustrate a bifurcation in the diagram. The latter branch bifurcates from the former around μ=5.84 and is shown in Fig. 8.

Bogoliubov-de Gennes stability analysis. The stability of a stationary solution ϕ0 to the NLS equation is determined by perturbing it with the following ansatz:

where ϵ is a small perturbation parameter, ω is the eigenfrequency, and (a,b)⊤ the corresponding eigenvector. After substituting (8) into the time-dependent NLS equation:

where B1=(ϕ0r)2−(ϕ0c)2 and B2=2ϕ0rϕ0c. The eigenvalues of the matrix on the right-hand side of (12) are ρr±iρc (with multiplicity two). Therefore, solving a real eigenvalue problem with the left-hand matrix of (12) yields the same eigenvalues and eigenvectors as the complex eigenvalue problem (10). We use a Krylov–Schur algorithm with a shift-and-invert spectral transformation Stewart (2002), implemented in the SLEPc library Hernandez et al. (2005), to solve the following eigenvalue problem:

where the matrices are real and ρ=ρr±iρc is complex. This problem is discretized with the same piecewise cubic finite element method used to find multiple solutions with deflation. The spectra of the solutions emanating from the 2nd excited states, presented in Figs. 1 and 2 of the paper, are respectively displayed in the different panels of Figs. 10 and 9. It is interesting to observe that some of the states such as the doubly charged vortex line of Fig. 1(e) can be dynamically stable for large values of the chemical potential μ, while others such as the anisotropic ring of Fig. 1(f) can be stable for sufficiently low μ.

Dynamics. The NLS equation (9) is integrated in time until t=50 using the following perturbed stationary solution ψ as initial state:

where ϕ0 is a stationary solution discovered by deflation and (a,b)⊤ is its most unstable eigendirection. The eigenvector (a,b)⊤ is normalized so that

and the perturbation parameter ϵ is chosen to be 0.1. We use a modified Crank-Nicolson method in time Delfour et al. (1981), which preserves to machine precision the square of the L2 norm (i.e., atom number) and the energy of the solutions

and piecewise cubic finite elements in space. Given the solution ψn at time tn=nΔt, ψn+1 is obtained by solving the following nonlinear PDE:

where Δt=5×10−2 is the time step used in the numerical simulations. The nonlinear problem is solved with Newton’s method. We present different snapshots of the two vortex rings solution (see Fig. 2(f) of the paper) in Fig. 11. We observe that the original two rings collapse around t=30 to form a single vortex line (see also the relevant movie in the Supplemental Material).