An Adversarial System to attack and an Authorship Attribution System (AAS) to defend itself against the attacks are analyzed. Defending a system against attacks from an adversarial machine learner can be done by randomly switching between models for the system, by detecting and reacting to changes in the distribution of normal inputs, or by using other methods. Adversarial machine learning is used to identify a system that is being used to map system inputs to outputs. Three types of machine learners are using for the model that is being attacked. The machine learners that are used to model the system being attacked are a Radial Basis Function Support Vector Machine, a Linear Support Vector Machine, and a Feedforward Neural Network. The feature masks are evolved using accuracy as the fitness measure. The system defends itself against adversarial machine learning attacks by identifying inputs that do not match the probability distribution of normal inputs. The system also defends itself against adversarial attacks by randomly switching between the feature masks being used to map system inputs to outputs. 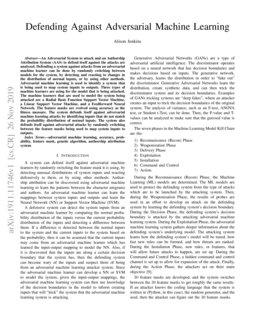 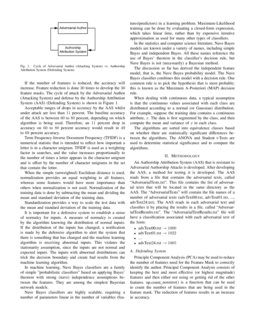 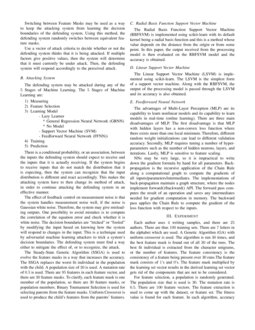 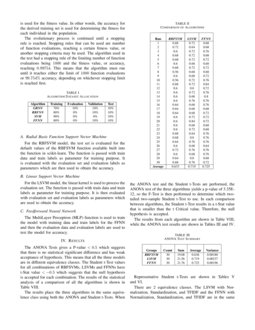 Generative Adversarial Networks (GANs) are a type of adversarial artificial intelligence. The discriminator operates based on a neural network that has decision boundaries and makes decisions based on inputs. The generative network, the adversary, learns the distribution in order to “fake out” the discriminator. Generative Adversarial Networks learn the distribution, create synthetic data, and can then trick the discriminator system and its decision boundaries. Examples of GANs tricking systems are “deep fakes”, where an attacker creates an input to trick the decision boundaries of the original system. The analysis of variance, such as an F-test, ANOVA test, or Student t-Test, can be done. Then, the P-value and T-values can be analyzed to make sure that the guessed value is correct.

The seven phases in the Machine Learning Model Kill Chain are the:

If the number of features is reduced, the accuracy will increase. Feature reduction is done

30 times to develop the 30 feature masks. The cycle of attack by the Adversarial Author (Attacking System) and defense by the Authorship Attribution System (AAS) (Defending System) is shown in Figure 1.

Standardization provides a way to scale the test data with the mean and standard deviation of the training data.

It is important for a defensive system to establish a sense of normalcy for inputs. A measure of normalcy is created by the algorithm knowing the distribution of normal inputs. If the distribution of the inputs has changed, a notification is made by the defensive algorithm to alert the system that there is something that has changed and the machine learning algorithm is receiving abnormal inputs. This violates the stationarity assumption, since the inputs are not normal and expected inputs. The inputs with abnormal distributions can trick the decision boundary and create bad results from the machine learning algorithm.

In machine learning, Naïve Bayes classifiers are a family of simple ”probabilistic classifiers” based on applying Bayes’ theorem with strong (naïve) independence assumptions between the features. They are among the simplest Bayesian network models.

Naïve Bayes classifiers are highly scalable, requiring a number of parameters linear in the number of variables (features/predictors) in a learning problem. Maximum-Likelihood training can be done by evaluating a closed-form expression, which takes linear time, rather than by expensive iterative approximation as used for many other types of classifiers.

In the statistics and computer science literature, Naïve Bayes models are known under a variety of names, including simple Bayes and independent Bayes. All these names reference the use of Bayes’ theorem in the classifier’s decision rule, but Naïve Bayes is not (necessarily) a Bayesian method.

The discussion so far has derived the independent feature model, that is, the Naïve Bayes probability model. The Naïve Bayes classifier combines this model with a decision rule. One common rule is to pick the hypothesis that is most probable; this is known as the Maximum A-Posteriori (MAP) decision rule.

When dealing with continuous data, a typical assumption is that the continuous values associated with each class are distributed according to a normal (or Gaussian) distribution. For example, suppose the training data contains a continuous attribute,

x. The data is first segmented by the class, and then compute the mean and variance of x in each class.

Principle Component Analysis (PCA) may be used to reduce the number of features need for the Feature Mask to correctly identify the author. Principal Component Analysis consists of keeping the best and most effective (or highest magnitude) features and then either not using or getting rid of the other features. np.count_nonzero() is a function that can be used to count the number of features that are being used in the feature mask. The reduction of features results in an increase in accuracy.

There is a conditional probability, or an association, between the inputs the defending system should expect to receive and the inputs that it is actually receiving. If the system begins to receive inputs that do not match the distribution that it is expecting, then the system can recognize that the input distribution is different and react accordingly. This makes the attacking system have to then change its method of attack, in order to continue attacking the defending system in an effective manner.

The effect of feedback control on measurement noise is that the system handles measurement noise well, if the noise is Gaussian white noise. Therefore, the system may give misleading outputs. One possibility to avoid mistakes is to compute the correlation of the equation error and check whether it is white noise. The decision boundaries are “tricked” or “fooled” by modifying the input based on knowing how the system will respond to changes in the input. This is a technique used by adversarial machine learning attackers to trick a system’s decision boundaries. The defending system must find a way either to mitigate the effect of, or to recognize, the attack.

The Radial Basis Function Support Vector Machine (RBFSVM) is implemented using scikit-learn with its default kernel being a radial basis function and this is a method whose value depends on the distance from the origin or from some point. In this paper, the output received from the processing model is then evaluated on the RBFSVM model and the accuracy is obtained.

The Linear Support Vector Machine (LSVM) is implemented using scikit-learn. The LSVM is the simplest form of a support vector machine. Along with the RBFSVM, the output of the processing model is passed through the LSVM and its accuracy is also obtained.

The advantages of Multi-Layer Perception (MLP) are its capability to learn nonlinear models and its capability to learn models in real-time (online learning). There are three main disadvantages of MLP. The first disadvantage is that MLP with hidden layers has a non-convex loss function where there exists more than one local minimum. Therefore, different random weight initializations can lead to different validation accuracy. Secondly, MLP requires tuning a number of hyper-parameters such as the number of hidden neurons, layers, and iterations. Lastly, MLP is sensitive to feature scaling.

NNs may be very large, so it is impractical to write down the gradient formula by hand for all parameters. Back-propagation is the recursive application of the Chain Rule along a computational graph to compute the gradients of all inputs/parameters/intermediates. The implementations of back-propagation maintain a graph structure, where the nodes implement forward()/backward() API. The forward pass computes the result of an operation and saves any intermediates needed for gradient computation in memory. The backward pass applies the Chain Rule to compute the gradient of the loss function with respect to the inputs.

Each author uses 4 writing samples, and there are 25 authors. There are thus 100 training sets. There are 7 letters in the alphabet which are used. A Genetic Algorithm (GA) with uniform crossover is used. The algorithm is run 30 times, and the best feature mask is found out of all 30 of the runs. The best fit individual is extracted from the character unigrams, or the number of features. The feature consistency is the consistency of a feature being present over 30 runs.The feature mask consists of 1’s and 0’s. The feature mask multiplied by the learning set vector results in the derived learning set vector gets rid of the components that are not to be considered.

For feature selection, a population is randomly generated. The population size that is used is 30. The mutation rate is 0.5. There are 100

feature vectors. The feature extraction is used to come up with the dataset, or feature set. The fitness value is found for each feature. In each algorithm, accuracy is used for the fitness value. In other words, the accuracy for the derived training set is used for determining the fitness for each individual in the population.

The MultiLayer Perceptron (MLP) function is used to train the model with training data and train labels for the FFNN and then the evaluation data and evaluation labels are used to test the model for accuracy.

The ANOVA Tests gives a P-value <0.5 which suggests that there is no statistical significant difference and has weak acceptance of hypothesis. This means that all the three models are in different equivalence classes. The Student t-Test values for all combinations of RBFSVMs, LSVMs and FFNNs have t-Stat value <−0.5

which suggests that the null hypothesis is accepted for each combination. The results of the statistical analysis of a comparison of all the algorithms is shown in Table

Representative Student t-Tests are shown in Tables V and VI.

The resulting accuracies are shown in Table VII.

The results of the statistical analysis of a comparison of all the algorithms is shown in Table VIII.

The RBFSVM, LSVM, and FFNN are all affected in similar ways when TFIDF, Standardization, and Normalization are not used. It is evident from the ANOVA test and Student t-Test that the LSVM and FFNN are in the same equivalence class. The FFNN had the highest average accuracy for 30 function evaluations, with an average accuracy of 72.5%. The ANOVA Test gives a P-value <0.05, which both suggests that there is no statistical significant difference and has weak acceptance of the hypothesis. This means that all the three models are in different equivalence classes. The Student t-Test values for all combinations of RBFSVMs, LSVMs and FFNNs have t-Stat value <−0.05 which suggests that the null hypothesis is accepted for each combination.

Particle Swarm Optimization (PSO) is an option for an algorithm that may be used instead a GA and may be explored in future work.

Vi Breakdown of the Work