The existence of multiple load-solution mappings of non-convex AC-OPF problems poses a fundamental challenge to deep neural network (DNN) schemes. As the training dataset may contain a mixture of data points corresponding to different load-solution mappings, the DNN can fail to learn a legitimate mapping and generate inferior solutions. We propose DeepOPF-AL as an augmented-learning approach to tackle this issue. The idea is to train a DNN to learn a unique mapping from an augmented input, i.e., (load, initial point), to the solution generated by an iterative OPF solver with the load and initial point as intake. We then apply the learned augmented mapping to solve AC-OPF problems much faster than conventional solvers. Simulation results over IEEE test cases show that DeepOPF-AL achieves noticeably better optimality and similar feasibility and speedup performance, as compared to a recent DNN scheme, with the same DNN size yet elevated training complexity. 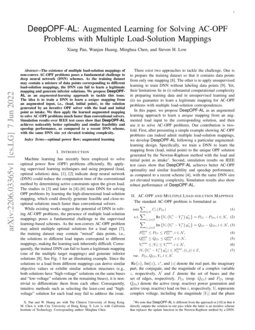 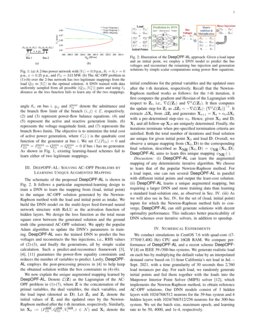 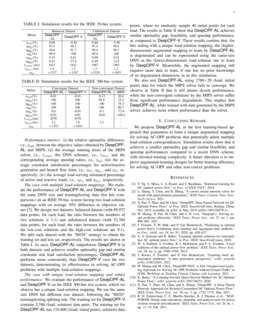 The AC-OPF problem is the key and challenging problem in the power syste...
Xiang Pan, et al. ∙

Machine learning has recently been employed to solve optimal power flow (OPF) problems efficiently. By applying supervised learning techniques and using prepared (load, optimal solution) data, [1, 2] indicate deep neural network (DNN) could reduce the computation time of the conventional method by determining active constraints upon the given load. The studies in [3] and later in [4, 5, 6] train DNN for solving OPF problems by learning the high-dimensional load-solution mapping, which could directly generate feasible and close-to-optimal solutions much faster than conventional solvers.

While existing works suggest the potential of DNN in solving AC-OPF problems, the presence of multiple load-solution mappings poses a fundamental challenge to the supervised learning-based schemes. As the non-convex AC-OPF problem may admit multiple optimal solutions for a load input [7], the training dataset may contain “mixed” data points, i.e., the solutions to different load inputs correspond to different mappings, making the learning task inherently difficult. Consequently, the trained DNN can fail to learn a legitimate mapping (one of the multiple target mappings) and generate inferior solutions [8]. See Fig. 1 for an illustrating example. Since the solutions to a load from different mappings can derive similar objective values or exhibit similar solution structures (e.g., both solutions have “high-voltage” solutions on the same buses and “low-voltage” solutions on the remaining buses), it is non-trivial to differentiate them from each other. Consequently, intuitive methods such as selecting the least-cost and “high-voltage” solution for each load may fail to address the issue.

There exist two approaches to tackle the challenge. One is to prepare the training dataset so that it contains data points from only one mapping [8]

. The other is to apply unsupervised learning to train DNN without labeling data points

[9]. Yet, their limitations lie in (i) substantial computational complexity in preparing training data and in unsupervised learning and (ii) no guarantee to learn a legitimate mapping for AC-OPF problems with multiple load-solution correspondences.

In this paper, we propose DeepOPF-AL as an augmented learning approach to learn a unique mapping from an augmented load input to the corresponding solution, and then use it to solve AC-OPF problems. Our contribution is two-fold. First, after presenting a simple example showing AC-OPF problems can indeed admit multiple load-solution mappings, we develop DeepOPF-AL following a particular augmented-learning design. Specifically, we train a DNN to learn the mapping from (load, initial point) to the unique OPF solution generated by the Newton-Raphson method with the load and initial point as intake111We note that DeepOPF-AL is different from the approach in [10] in that it directly outputs the solution in one pass while the latter is an iterative scheme that replaces the update function in the Newton-Raphson method by a DNN.. Second, simulation results on IEEE test cases show that DeepOPF-AL achieves better AC-OPF optimality and similar feasibility and speedup performance, as compared to a recent scheme [4], with the same DNN size yet elevated training complexity. Simulation results also show robust performance of DeepOPF-AL.

The standard AC-OPF problem is formulated as

Re{z}, Im{z}, z∗, and |z| denote the real part, the imaginary part, the conjugate, and the magnitude of a complex variable z, respectively. N and E denote the set of buses and the set of edges, respectively. PGi (resp. QGi) and PDi (resp. QDi) denote the active (resp. reactive) power generation and active (resp. reactive) load on bus i, respectively. Vi represents complex voltage, including the magnitude |Vi| and the phase angle θi, on bus i. yij and Smaxij denote the admittance and the branch flow limit of the branch (i,j)∈E, respectively. (2) and (3) represent power-flow balance equations. (4) and (5) represent the active and reactive generation limits. (6) represents the voltage magnitude limit, and (7) represents the branch flows limits. The objective is to minimize the total cost of active power generation, where Ci(⋅) is the quadratic cost function of the generator at bus i. We set Ci(PGi)=0 and PminGi=PmaxGi=QminGi=QmaxGi=0 if bus i has no generator. As shown in Fig. 1, existing learning-based schemes fail to learn either of two legitimate mappings.

The schematic of the proposed DeepOPF-AL is shown in Fig. 2

. It follows a particular augmented-learning design to train a DNN to learn the mapping from (load, initial point) to the unique AC-OPF solution generated by the Newton-Raphson method with the load and initial point as intake. We build the DNN model on the multi-layer feed-forward neural network structure with ReLU as the activation function of hidden layers. We design the loss function as the total mean square error between the generated solution and the ground truth (the generated AC-OPF solution). We apply the popular Adam algorithm to update the DNN’s parameters in training.

DeepOPF-AL uses the trained DNN to predict the bus voltages and reconstructs the bus injections, i.e., RHS values of (2)-(3), and finally the generations, all by simple scalar calculation. Such a predict-and-reconstruct framework [3, 11, 4] guarantees the power-flow equality constraints and reduces the number of variables to predict. Lastly, DeepOPF-AL employs the post-processing process in [4] to help keep the obtained solution within the box constraints in (4)-(6).

We now explain the unique augmented mapping learned by DeepOPF-AL. Denote L(Z) as the Lagrangian of the AC-OPF problem in (1)-(7), where Z is the concatenation of the primal variables, the dual variables, the slack variables, and the load input (denoted as D). Let Z0 and Zt denote the initial values of Z, and the updated ones by the Newton-Raphson method after the t-th iteration, respectively. Similarly, let X0:=(PinitGi,QinitGi,Viniti,i∈N) and Xt denote the initial conditions for the primal variables and the updated ones after the t-th iteration, respectively. Recall that the Newton-Raphson method works as follows: for the t-th iteration, it first computes the gradient and Hessian of the Lagrangian with respect to Zt, i.e., ∇L(Zt) and ∇2L(Zt). It then computes the update step for Zt as ΔZt=−∇L(Zt)⋅(∇2L(Zt))−1. It extracts ΔXt from ΔZt and generates Xt+1=Xt+αtΔXt with a pre-determined step-size αt. Hence, given X0 and D, X1 and all follow-up Xts are uniquely determined. Finally, the iterations terminate when pre-specified termination criteria are satisfied. Both the total number of iterations and final solution are unique for given initial point X0 and load D. Overall, we observe a unique mapping from (X0,D) to the corresponding final solution, described as XNR(X0,D)=ψNR(X0,D). DeepOPF-AL aims to learn this unique mapping ψNR(⋅).

(i) DeepOPF-AL can learn the augmented mapping of any deterministic iterative algorithm. We choose to learn that of the popular Newton-Raphson method. For a load input, one can run several DeepOPF-AL in parallel with different initial points and output the least-cost solution. (ii) DeepOPF-AL learns a unique augmented mapping, but requiring a larger DNN and more training data than learning a standard load-solution one, as observed in Sec. IV. (iii) As we will also see in Sec. IV, for the set of (load, initial point) inputs for which the Newton-Raphson method fails to converge, DeepOPF-AL can still generate solutions with decent optimality performance. This indicates better practicability of DNN schemes over iterative solvers, in addition to speedup.

on IEEE 39-/300-bus systems. We generate realistic load on each bus by multiplying the default value by an interpolated demand curve based on 11-hour California’s net load in Jul. – Sept. 2021, with a time granularity of 30 seconds thus 2,760 load instances per day. For each load, we randomly generate initial points and fed them together with the loads into the Matpower Interior Point Solver (MIPS) solver

The case with multiple load-solution mappings

The case with unique load-solution mapping and robust performance

We evaluate the performance of DeepOPF-AL and DeepOPF-V on the IEEE 300-bus test system, which we observe has a unique load-solution mapping. We use the same size DNN but different size dataset, following the “80/20” training/testing splitting rule. The training set for DeepOPF-V contains 2,760 (load, solution) data pairs. The training set for DeepOPF-AL has 110,400 ((load, initial point), solution) data points, where we randomly sample 40 initial points for each load. The results in Table II show that DeepOPF-AL achieves similar optimality gap, feasibility, and speedup performance, as compared to DeepOPF-V. These results confirm that, for this setting with a unique load-solution mapping, the (higher-dimensional) augmented mapping to learn by DeepOPF-AL is degenerated and can be represented using the same-size DNN as the (lower-dimensional) load-solution one to learn by DeepOPF-V. Meanwhile, the augmented mapping still requires more data to train, if one has no prior knowledge of its degenerated dimension, as in this simulation.

We propose DeepOPF-AL as the first learning-based approach that guarantees to learn a unique augmented mapping for solving AC-OPF problems that potentially admit multiple load-solution correspondences. Simulation results show that it achieves a smaller optimality gap and similar feasibility and speedup performances compared to a recent DNN scheme, with elevated training complexity. A future direction is to improve augmented-learning designs for better training efficiency for solving AC-OPF and other non-convex problems.