Within-Class Covariance Normalization (WCCN) is a powerful post-processing method for normalizing the within-class covariance of a set of data points. WCCN projects the observations into a linear sub-space where the within-class variability is reduced. This property has proven to be beneficial in subsequent recognition tasks. The central idea of this paper is to reformulate the classic WCCN as a Deep Neural Network (DNN) compatible version. We propose the Deep WithinClass Covariance Analysis (DWCCA) which can be incorporated in a DNN architecture. This formulation enables us to exploit the beneficial properties of WCCN, and still allows for training with Stochastic Gradient Descent (SGD) in an end-to-end fashion. We investigate the advantages of DWCCA on deep neural networks with convolutional layers for supervised learning. Our results on Acoustic Scene Classification show that via DWCCA we can achieves equal or superior performance in a VGG-style deep neural network. 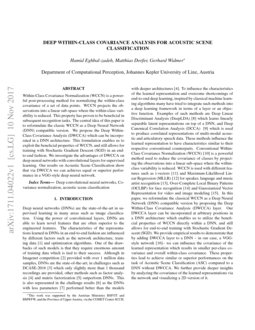 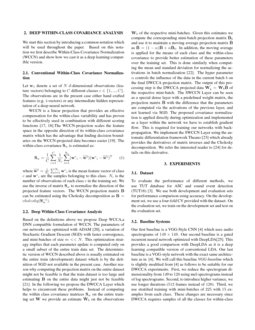 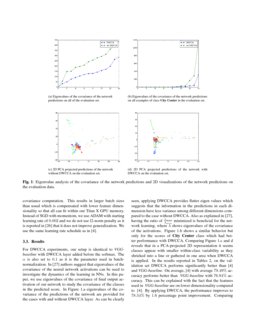 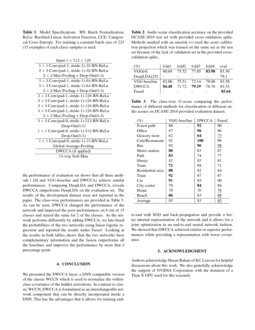 Deep neural networks (DNNs) are the state-of-the-art in supervised learning in many areas such as image classification. Using the power of convolutional layers, DNNs are able to learn novel features that are often superior to the engineered features. The characteristics of the representations learned in DNNs in an end-to-end fashion are influenced by different factors such as the network architecture, training data [1]

and optimization algorithms. One of the drawbacks of such models is that they require enormous amount of training data which is tied to their success. Although in Imagenet competition

[2] provided with over 1 million data samples, DNNs are the state-of-the-art; in challenges such as DCASE-2016 [3] which only slightly more than 1 thousand recordings are provided, other methods such as factor analysis [4] and matrix factorization [5] outperform DNNs. This is also represented in the challenge results [6] as the DNNs with less parameters [7] performed better than the models with deeper architectures [4]

. To influence the characteristics of the learned representation and overcome shortcomings of end-to-end deep learning, inspired by classical machine learning algorithms many have tried to integrate such methods into a deep learning framework in terms of a layer or an objective function. Examples of such methods are Deep Linear Discriminant Analysis (DeepLDA)

[8] which learns linearly separable latent representations on top of a DNN, and Deep Canonical Correlation Analysis (DCCA)  [9] which is used to produce correlated representations of multi-modal acoustic and articulatory speech data. These methods influence the learned representation to have characteristics similar to their respective conventional counterparts. Conventional Within-Class Covariance Normalization (WCCN) [10]

is a powerful method used to reduce the covariance of classes by projecting the observations into a linear sub-space where the within-class variability is reduced. WCCN is used with different features such as i-vectors

[14] and Gaussianized Vector Representation for video and image modeling [15]. In this paper, we reformulate the classical WCCN as a Deep Neural Network (DNN) compatible version by proposing the Deep Within-Class Covariance Analysis (DWCCA) layer. Our DWCCA layer can be incorporated at arbitrary positions in a DNN architecture which enables us to utilize the beneficial properties of WCCN directly within a DNN, and still allows for end-to-end training with Stochastic Gradient Descent (SGD). We provide empirical results to demonstrate that by adding DWCCA layer to a DNN – in our case, a VGG-style network [16]– we can influence the covariance of the learned representation which results in smaller per-class covariance and overall within-class covariance. These properties lead to achieve similar or superior performances on the task of Acoustic Scene Classification (ASC) compared to a DNN without DWCCA. We further provide deeper insights by analyzing the covariance of the learned representations via the network and visualizing a 2D version of it.

We start this section by introducing a common notation which will be used throughout the paper. Based on this notation we first describe Within-Class Covariance Normalization (WCCN) and show how we cast it as a deep learning compatible version.

. The observations are in the present case either hand crafted features (e.g. i-vectors) or any intermediate hidden representation of a deep neural network.

WCCN is a linear projection that provides an effective compensation for the within-class variability and has proven to be effectively used in combination with different scoring functions [17, 18].The WCCN-projection scales the feature space in the opposite direction of its within-class covariance matrix which has the advantage that finding decision boundaries on the WCCN-projected data becomes easier [19]. The within-class covariance Sw

where ¯¯¯¯¯¯wc=1Nc∑Nci=1wci is the mean feature vector of class c and wci are the samples belonging to this class. Nc is the number of observations of each class c in the training set. We use the inverse of matrix Sw to normalize the direction of the projected feature vectors. The WCCN projection matrix B can be estimated using the Cholesky decomposition as B=cholesky(S−1w).

Based on the definitions above we propose Deep WCCA,a DNN compatible formulation of WCCN. The parameters of our networks are optimized with ADAM [20], a variation of Stochastic Gradient Descent (SGD) with faster convergence, and mini-batches of size m<<N. This optimization strategy implies that each parameter update is computed only on a small subset of the entire train data set. The deterministic version of WCCN described above is usually estimated on the entire train (development) dataset which is by the definition of SGD not available in the present case. Another reason why computing the projection matrix on the entire dataset might not be feasible is that the train dataset is too large and estimating B on the entire data might just not be feasible [21]. In the following we propose the DWCCA Layer which helps to circumvent these problems.

Instead of computing the within class covariance matrices Sw on the entire training set W we provide an estimate ^Wb on the observations Wb of the respective mini-batches. Given this estimates we compute the corresponding mini-batch projection matrix ^Bb and use it to maintain a moving average projection matrix ¯B as ¯B=(1−α)¯B+α^Bb

. In addition, the moving average is applied for the means of each class and the within-class covariance to provide better estimation of these parameters over the training set. This is done similarly when computing the mean and standard deviation for normalizing the activations in batch normalization

[22]. The hyper parameter α controls the influence of the data in the current batch b on the final DWCCA projection matrix. The output of this processing step is the DWCCA projected data W′b=Wb¯B of the respective mini-batch. The SWCCN Layer can be seen as a special dense layer with a predefined weight matrix, the projection matrix ¯B

with the difference that the parameters are computed via the activations of the previous layer, and not learned via SGD. The proposed covariance normalization is applied directly during optimization and implemented as a layer within the network we have to establish gradient flow. This is required for training our networks with back-propagation. We implement the SWCCN Layer using the automatic differentiation framework Theano

[23] which already provides the derivatives of matrix inverses and the Cholesky decomposition. We refer the interested reader to [24] for details on this derivative.

. Our second baseline is a gated recurrent neural network optimized with DeepLDA

[25]. This provides a good comparison with DeepLDA as it is a deep learning compatible version of conventional LDA. Our last baseline is a VGG-style network with the exact same architecture as in  [4]. We will call this baseline VGG-baseline which is slightly modified from [4] as follows to be suitable for our DWCCA experiments. First, we reduce the spectrogram dimensionality from 149 to 128

using mel-spectrograms instead of log spectrograms. Second, to introduce higher variance, we use longer durations (

512 frames instead of 128). Third, we use stratified training with mini-batches of 225 with 15 examples from each class. These changes are necessary since DWCCA requires samples of all the classes for within-class covariance computation. This results in larger batch sizes than usual which is compensated with lower feature dimensionality so that all can fit within our Titan X GPU memory. Instead of SGD with momentom, we use ADAM with starting learning rate of 0.002 and we do not use l2-norm penalty as it is reported in [26] that it does not improve generalization. We use the same learning rate schedule as in [4].

For DWCCA experiments, our setup is identical to VGG-baseline with DWCCA layer added before the softmax. The α is also set to 0.1 as it is the parameter used in batch-normalization. In [27] authors suggest that eigenvalues of the covariance of the neural network activations can be used to investigate the dynamics of the learning in NNs. In this paper, we use eigenvalues of the covariance of final output activation of our network to study the covariance of the classes in the predicted score. In Figure 1.a eigenvalues of the covariance of the predictions of the network are provided for the cases with and without DWCCA layer. As can be clearly seen, applying DWCCA provides flatter eigen values which suggests that the information in the predictions in each dimension have less variance among different dimensions compared to the case without DWCCA. Also as explained in [27], having the ratio of λmaxλmin minimized is beneficial for the network learning, where λ shows eigenvalues of the covariance of the activations. Figure 1.b shows a similar behavior but only for the scores of City Center class which had better performance with DWCCA. Comparing Figure 1.c and d reveals that in a PCA-projected 2D representation it seems classes appear with smaller within-class variability as they shrieked into a line or gathered in one area when DWCCA is applied. In the results reported in Tables 2, on the validation set DWCCA performs significantly better than [4] and VGG-baseline. On average, [4] with average 79.49% accuracy performs better than  VGG-baseline with 76.94% accuracy. This can be explained with the fact that the features used in  VGG-baseline are on lower dimensionality compared to  [4]. By applying DWCCA, the performance improves to 78.54% by 1.6 percentage point improvement. Comparing the performance of evaluation set shows that all three methods ( [4] and VGG-baseline and DWCCA) achieve similar performances. Comparing DeepLDA and DWCCA, reveals DWCCA outperforms DeepLDA on the evaluation set. The results of the development dataset were not reported in the paper.

The class-wise performances are provided in Table 3

. As can be seen, DWCCA changed the performance of the network and improved the poor performances on 6 out of 15 classes and stayed the same for 2 of the classes. As the network performs differently by adding DWCCA, we late-fused the probabilities of the two networks using linear logistic regression and reported the results under

Fused. Looking at the results in both tables shows that the two networks have complementary information and the fusion outperforms all the baselines and improves the performance by more that 2 percentage point.

We presented the DWCCA layer, a DNN compatible version of the classic WCCN which is used to normalize the within-class covariance of the hidden activations. In contrast to classic WCCN, DWCCA is formulated as an interchangeable network component that can be directly incorporated inside a DNN. This has the advantages that it allows for training end-to-end with SGD and back-propagation and provide a better internal representation of the network and it allows for a joint optimization in an end-to-end neural network fashion. We showed that DWCCA achieved similar or superior performances while providing a representation with lower covariance.

Authors acknowledge Hasan Bahari of KU Leuven for helpful discussions about this work. We also gratefully acknowledge the support of NVIDIA Corporation with the donation of a Titan X GPU used for this research.