The application of deep learning (DL) models to the decoding of cognitive states from whole-brain functional Magnetic Resonance Imaging (fMRI) data is often hindered by the small sample size and high dimensionality of these datasets. Especially, in clinical settings, where patient data are scarce. In this work, we demonstrate that transfer learning represents a solution to this problem. Particularly, we show that a DL model, which has been previously trained on a large openly available fMRI dataset of the Human Connectome Project, outperforms a model variant with the same architecture, but which is trained from scratch, when both are applied to the data of a new, unrelated fMRI task. Even further, the pre-trained DL model variant is already able to correctly decode 67.51 individuals, when fine-tuned on a dataset of the size of only three subjects. 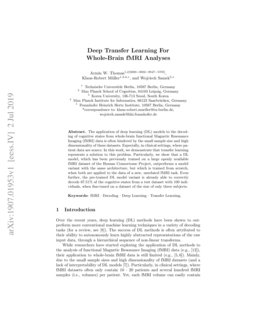 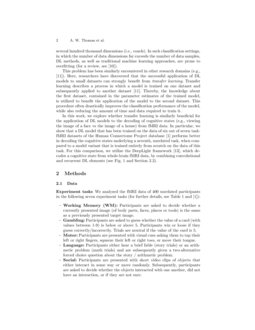 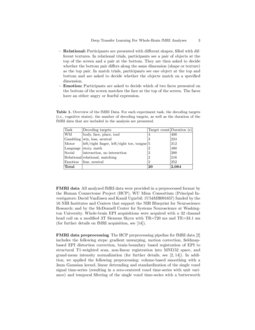 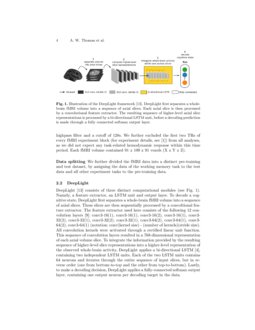 Autism spectrum disorder (ASD) is one of the most common neurodevelopmen...
Dulani Meedeniya, et al. ∙

We present the TFF Transformer framework for the analysis of functional ...
Itzik Malkiel, et al. ∙

Over the recent years, deep learning (DL) methods have been shown to outperform more conventional machine learning techniques in a variety of decoding tasks (for a review, see

). The success of DL methods is often attributed to their ability to autonomously learn highly abstracted representations of the raw input data, through a hierarchical sequence of non-linear transforms.

While researchers have started exploring the application of DL methods to the analysis of functional Magnetic Resonance Imaging (fMRI) data (e.g., [12]), their application to whole-brain fMRI data is still limited (e.g., [5, 6]). Mainly, due to the small sample sizes and high dimensionality of fMRI datasets (and a lack of interpretability of DL models [7]). Particularly, in clinical settings, where fMRI datasets often only contain 10 - 20 patients and several hundred fMRI samples (i.e., volumes) per patient. Yet, each fMRI volume can easily contain several hundred thousand dimensions (i.e., voxels). In such classification settings, in which the number of data dimensions far exceeds the number of data samples, DL methods, as well as traditional machine learning approaches, are prone to overfitting (for a review, see [10]).

This problem has been similarly encountered in other research domains (e.g., [11]). Here, researchers have discovered that the successful application of DL models to small datasets can strongly benefit from transfer learning. Transfer learning describes a process in which a model is trained on one dataset and subsequently applied to another dataset [11]

. Thereby, the knowledge about the first dataset, contained in the parameter estimates of the trained model, is utilized to benefit the application of the model to the second dataset. This procedure often drastically improves the classification performance of the model, while also reducing the amount of time and data required to train it.

In this work, we explore whether transfer learning is similarly beneficial for the application of DL models to the decoding of cognitive states (e.g., viewing the image of a face vs the image of a house) from fMRI data. In particular, we show that a DL model that has been trained on the data of six out of seven task-fMRI datasets of the Human Connectome Project database [1] performs better in decoding the cognitive states underlying a seventh, unrelated task, when compared to a model variant that is trained entirely from scratch on the data of this task. For this comparison, we utilize the DeepLight framework [13], which decodes a cognitive state from whole-brain fMRI data, by combining convolutional and recurrent DL elements (see Fig. 1 and Section 2.2).

We analyzed the fMRI data of 400 unrelated participants in the following seven experiment tasks (for further details, see Table 1 and [1]):

All analyzed fMRI data were provided in a preprocessed format by the Human Connectome Project (HCP), WU Minn Consortium (Principal Investigators: David VanEssen and Kamil Ugurbil; 1U54MH091657) funded by the 16 NIH Institutes and Centers that support the NIH Blueprint for Neuroscience Research; and by the McDonnell Center for Systems Neuroscience at Washington University. Whole-brain EPI acquisitions were acquired with a 32 channel head coil on a modified 3T Siemens Skyra with TR=720 ms and TE=33.1 ms (for further details on fMRI acquisition, see [14]).

). In addition, we applied the following preprocessing: volume-based smoothing with a 3mm Gaussian kernel, linear detrending and standardization of the single voxel signal time-series (resulting in a zero-centered voxel time-series with unit variance) and temporal filtering of the single voxel time-series with a butterworth highpass filter and a cutoff of 128s. We further excluded the first two TRs of every fMRI experiment block (for experiment details, see

[1]) from all analyses, as we did not expect any task-related hemodynamic response within this time period. Each fMRI volume contained 91 x 109 x 91 voxels (X x Y x Z).

We further divided the fMRI data into a distinct pre-training and test dataset, by assigning the data of the working memory task to the test data and all other experiment tasks to the pre-training data.

, containing two independent LSTM units. Each of the two LSTM units contains 64 neurons and iterates through the entire sequence of input slices, but in reverse order (one from bottom-to-top and the other from top-to-bottom). Lastly, to make a decoding decision, DeepLight applies a fully-connected softmax output layer, containing one output neuron per decoding target in the data.

and a batch size of 24 fMRI volumes. DeepLight’s weights were initialized by the use of a normal-distributed random initialization scheme

The goal of the first analysis was to pre-train DeepLight on the data of the six tasks contained in the pre-training dataset (see Section 2.1.4). To this end, we divided the data within each task into a distinct training and validation dataset, by assigning the data of 300 randomly selected subjects to the training data and the data of the remaining 100 subjects to the validation data. During pre-training, DeepLight’s output layer contained 16 neurons, one for each cognitive state of each task in the pre-training dataset (for an overview, see Table 1). Thereby, DeepLight has no knowledge of the underlying tasks and is able to identify an individual’s cognitive state without knowing which task the individual performed. Overall, we trained DeepLight for a period of 40 epochs (Fig. 2). Each epoch was defined as an iteration over the entire training data.

The goal of the second analysis was to explore the benefits of transfer learning for the application of DL models to fMRI data. To this end, we compared the performance of the pre-trained DeepLight variant (see Section 3.1) to that of a variant that was trained entirely from scratch, when both are applied to the data of the left-out test task (the working memory task, see Section 2.1.4). We again divided the data of the test task into a separate training and validation dataset, by randomly assigning 300 distinct subjects to the training data and the remaining 100 to the validation data. We then trained a DeepLight variant with transfer learning, and one without, on the training data of the test task. The output layer of both variants was set to contain four neurons (one per decoding target in the working memory task, see Table 1). Otherwise, the architecture and training procedures (see Section 2.2.1) of both variants were identical.

The broad application of DL models to fMRI data has long been hindered by the small sample size, and high dimensionality, of typical fMRI datasets. Here, we have demonstrated that transfer learning is strongly beneficial for the application of DL models to small fMRI datasets. A DL model that has been pre-trained on a large, openly available fMRI dataset, generally requires less training data and time, and achieves higher decoding accuracies, when compared to a model variant with the same architecture that is trained entirely from scratch. Even further, the pre-trained model variant already performs well in decoding the cognitive states of 100 individuals in an unrelated fMRI task, when fine-tuned on a dataset of the size of only three subjects.