Deep Speaker Verification: Do We Need End to End?

End-to-end learning treats the entire system as a whole adaptable black box, which, if sufficient data are available, may learn a system that works very well for the target task. This principle has recently been applied to several prototype research on speaker verification (SV), where the feature learning and classifier are learned together with an objective function that is consistent with the evaluation metric. An opposite approach to end-to-end is feature learning, which firstly trains a feature learning model, and then constructs a back-end classifier separately to perform SV. Recently, both approaches achieved significant performance gains on SV, mainly attributed to the smart utilization of deep neural networks. However, the two approaches have not been carefully compared, and their respective advantages have not been well discussed. In this paper, we compare the end-to-end and feature learning approaches on a text-independent SV task. Our experiments on a dataset sampled from the Fisher database and involving 5,000 speakers demonstrated that the feature learning approach outperformed the end-to-end approach. This is a strong support for the feature learning approach, at least with data and computation resources similar to ours. 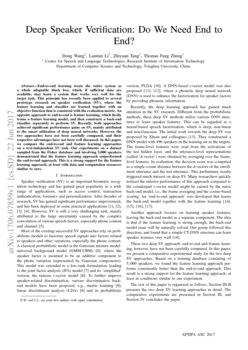 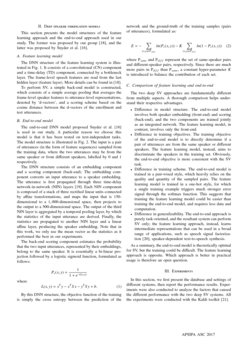 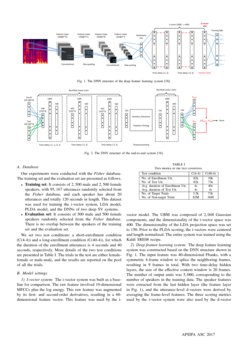 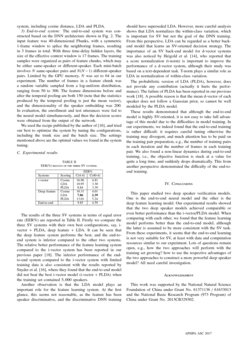 Speaker verification (SV) is an important biometric recognition technology and has gained great popularity in a wide range of applications, such as access control, transaction authentication, forensics and personalization. After decades of research, SV has gained significant performance improvement, and has been deployed in some practical applications [1, 2, 3, 4]. However, SV is still a very challenging task, mainly attributed to the large uncertainty caused by the complex convolution of various speech factors, especially phone content and channel [5].

Most of the existing successful SV approaches rely on probabilistic models to factorize speech signals into factors related to speakers and other variations, especially the phone content. A classical probabilistic model is the Gaussian mixture model-universal background model (GMM-UBM)

[6], where the speaker factor is assumed to be an additive component to the phone variation (represented by Gaussian components). This model was extended to a low-rank formulation, leading to the joint factor analysis (JFA) model [7]

and its ‘simplified’ version, the famous i-vector model

Recently, the deep learning approach has gained much attention in the SV research. Different from the probabilistic methods, these deep SV methods utilize various DNN structures to learn speaker features. This can be regarded as a neural-based speech factorization, which is deep, non-linear and non-Gaussian. The initial work towards the deep SV was proposed by Ehsan and colleagues

[13]. They constructed a DNN model with 496 speakers in the training set as the targets. The frame-level features were read from the activations of the last hidden layer, and the utterance-level representations (called ‘d-vector’) were obtained by averaging over the frame-level features. In evaluation, the decision score was computed as a simple cosine distance between the d-vectors of the enrollment utterance and the test utterance. This preliminary results triggered much interest on deep SV. Many researchers quickly noticed the inferior performance of this approach compared to the counterpart i-vector model might be caused by the naive back-end model, i.e., the frame averaging and the cosine-based scoring. An ‘end-to-end approach’ was developed that learns the back-end model together with the feature learning [14, 15, 16, 17].

The rest of this paper is organized as follows. Section 3.2 presents the two deep SV learning approaches in detail. The comparative experiments are presented in Section 3, and Section 4 concludes the paper.

The DNN structure of the feature learning system is illustrated in Fig. 1. It consists of a convolutional (CN) component and a time-delay (TD) component, connected by a bottleneck layer. The frame-level speech features are read from the last hidden layer (feature layer). More details can be found in [18].

To perform SV, a simple back-end model is constructed, which consists of a simple average pooling that averages the frame-level speaker features to utterance-level representations, denoted by ‘d-vectors’, and a scoring scheme based on the cosine distance between the d-vectors of the enrollment and test utterances.

The end-to-end DNN model proposed Snyder et al. [16] is used in our study. A particular reason we choose this model is that it has been tested on text-independent tasks. The model structure is illustrated in Fig. 2. The input is a pair of utterances (in the form of feature sequences) sampled from the training data, where the two utterances may be from the same speaker or from different speakers, labelled by 0 and 1 respectively.

. Each NIN component is composed of a stack of three rectified linear units connected by affine transformations, and maps the input that is

-dimensional space. The output of the third NIN layer is aggregated by a temporal pooling layer, by which the statistics of the input utterance are derived. Finally, the statistics are propagated to another NIN layer and a linear affine layer, producing the speaker embedding. Note that in this work, we only use the mean vector as the statistics as it performed the best in our experiments.

The back-end scoring component estimates the probability that the two input utterances, represented by their embeddings, belong to the same speaker. It is essentially a bi-linear projection followed by a logistic sigmoid function, formulated as follows:

where Psame and Pdiff represent the set of same-speaker pairs and different-speaker pairs, respectively. Since there are much more pairs in Pdiff than Psame, a constant hyper-parameter K is introduced to balance the contribution of each set.

2.3 Comparison of feature learning and end-to-end

As a summary, the end-to-end model is theoretically optimal for SV, but the training could be difficult. The feature learning approach is opposite. Which approach is better in practical usage is therefore an open question.

Our experiments were conducted with the Fisher database. The training set and the evaluation set are presented as follows.

The i-vector system was built as a baseline for comparison. The raw feature involved 19-dimensional MFCCs plus the log energy. This raw feature was augmented by its first- and second-order derivatives, resulting in a 60-dimensional feature vector. This feature was used by the i-vector model. The UBM was composed of 2,048 Gaussian components, and the dimensionality of the i-vector space was 400. The dimensionality of the LDA projection space was set to 150. Prior to the PLDA scoring, the i-vectors were centered and length normalized. The entire system was trained using the Kaldi SRE08 recipe.

The deep feature learning system was constructed based on the DNN structure shown in Fig. 1. The input feature was 40-dimensional Fbanks, with a symmetric 4-frame window to splice the neighboring frames, resulting in 9 frames in total. With two time-delay hidden layers, the size of the effective context window is 20 frames. The number of output units was 5,000, corresponding to the number of speakers in the training data. The speaker features were extracted from the last hidden layer (the feature layer in Fig. 1), and the utterance-level d-vectors were derived by averaging the frame-level features. The three scoring metrics used by the i-vector system were also used by the d-vector system, including cosine distance, LDA and PLDA.

The end-to-end system was constructed based on the DNN architecture shown in Fig. 2. The input feature was 40-dimensional Fbanks, with a symmetric 1-frame window to splice the neighboring frames, resulting in 3 frames in total. With three time-delay hidden layers, the size of the effective context window is 17 frames. The training samples were organized as pairs of feature chunks, which may be either same-speaker or different-speaker. Each mini-batch involves N same-speaker pairs and N(N−1) different-speaker pairs. Limited by the GPU memory, N was set to 64

in our experiment. The number of frames in a feature chunk was a random variable sampled from a log-uniform distribution, ranging from

50 to 300. The feature dimensions before and after the temporal pooling are both 150 (note that the statistics produced by the temporal pooling is just the mean vector), and the dimensionality of the speaker embedding was 200. In evaluation, the enrollment and test utterances were fed to the neural model simultaneously, and then the decision scores were obtained from the output of the network.

We used the recipe published by the author of [16], and tried our best to optimize the system by tuning the configurations, including the trunk size and the batch size. The settings mentioned above are the optimal values we found in the system tuning.

The results of the three SV systems in terms of equal error rate (EER%) are reported in Table 2. Firstly we compare the three SV systems with their own best configurations, say, i-vector + PLDA, deep feature + LDA. It can be seen that the deep feature system performs the best, and the end-to-end system is inferior compared to the other two systems. The relative better performance of the feature learning system compared to the i-vector system has been reported in our previous paper [18]. The inferior performance of the end-to-end system compared to the i-vector system with limited training data is also consistent with the results reported by Snyder et al. [16], where they found that the end-to-end model did not beat the best i-vector model (i-vector + PLDA) when the training set contained 5,000 speakers.

Another observation is that the LDA model plays an important role for the feature learning system. At the first glance, this seems not reasonable, as the feature has been speaker discriminative, and the discriminative DNN training should have superseded LDA. However, more careful analysis shows that LDA normalizes the within-class variation, which is important for SV but not the goal of the DNN training. From this perspective, LDA can be regarded as a better back-end model that learns an SV-oriented decision strategy. The importance of an SV back-end model for d-vector systems was also noticed by Heigold et al. [14], who reported that a score normalization (t-norm) is important to improve the performance of a d-vector system, although their study was based on a text-dependent task. T-norm plays a similar role as LDA in normalization of within-class variation.

The probabilistic version of LDA (PLDA), however, does not provide any contribution (actually it hurts the performance). The failure of PLDA has been reported in our previous work [18]. A possible reason is that the mean d-vector of each speaker does not follow a Gaussian prior, so cannot be well modeled by the PLDA model.

This paper studied two deep speaker verification models. One is the end-to-end neural model and the other is the deep feature learning model. Our experimental results showed that the two deep speaker models achieved comparable or even better performance than the i-vector/PLDA model. When comparing with each other, we found that the feature learning model performs better than the end-to-end model, although the latter is assumed to be more consistent with the SV task. From these experiments, it seems that the end-to-end learning is not very suitable for SV, at least with data and computation resources similar to our experiment. Lots of questions remain open, e.g., how the two approaches will perform with the training set growing? how to use the respective advantages of the two approaches to construct a more powerful deep speaker model? All need careful investigation.