Automatic pain intensity assessment has a high value in disease diagnosis applications. Inspired by the fact that many diseases and brain disorders can interrupt normal facial expression formation, we aim to develop a computational model for automatic pain intensity assessment from spontaneous and micro facial variations. For this purpose, we propose a 3D deep architecture for dynamic facial video representation. The proposed model is built by stacking several convolutional modules where each module encompasses a 3D convolution kernel with a fixed temporal depth, several parallel 3D convolutional kernels with different temporal depths, and an average pooling layer. Deploying variable temporal depths in the proposed architecture allows the model to effectively capture a wide range of spatiotemporal variations on the faces. Extensive experiments on the UNBC-McMaster Shoulder Pain Expression Archive database show that our proposed model yields in a promising performance compared to the state-of-the-art in automatic pain intensity estimation. 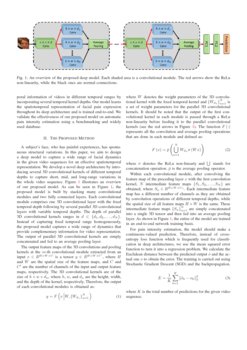 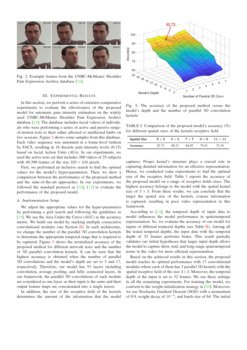 The recent medical evidences reveal that a plethora of diseases and brain disorders produce facial abnormalities and interrupt normal facial expression formation [1]. As the fifth vital sign of the health condition [2], pain is recognized as a highly unpleasant sensation which is caused by diseases, injuries, and mental distress. So, pain is commonly considered as an indicator of the health condition. The facial expressions can be largely characterized as a reflective, spontaneous reaction to painful experiences [3]. Therefore, the detailed analysis of the facial expressions of a patient who is suffering from pain can provide objective information for practitioners for an effective disease diagnosis.

Pain is usually reported by the patients themselves (self-report). However, this method cannot be used for the population who are incapable of articulating their pain experiences, such as neonates and unconscious people. The majority of works on pain assessment is based on the Facial Action Coding System (FACS) [4] in which the facial expressions are objectively scored in terms of elementary facial movements. These studies have mainly focused on detecting and measuring the pain intensity by extracting features from videos of the face [5, 6]. Lucy et al. [6]

extracted LBP and DCT features from facial images and used them and their combinations as appearance-based features. They fed these features to Relevance Vector Regression (RVR) for pain intensity detection. Florea

et al. [8] improved the performance of pain intensity recognition by using a histogram of topographical features and an SVM classifier. Zhao et al. [9] proposed an alternating direction method of multipliers to solve Ordinal Support Vector Regression (OSVR). Although traditional image descriptors represent the video frames based on static features, they are restrictive in acquiring rich dynamic information from the face.

Recently, a few attempts have been made to model temporal information within video sequences by using deep neural networks. Zhou

proposed a Recurrent Convolutional Neural Network (RCNN) as a regressor model to estimate the pain intensity. They converted video frames into vectors and fed them to their model. However, this spatial conversion results in losing the structural information of the face. Rodriguez

In order to achieve an efficient representation of the facial videos, it is crucial to capture both appearance and temporal information. In recent years, several deep models have been proposed for spatiotemporal representation. These models mainly use 3D filters with fixed temporal kernel depths. The most intuitive architecture is based on 3D Convolutional Neural Networks (CNNs) [12] where the depth of kernels corresponds to the number of frames used as input. Simonyan et al. [13] proposed a two-stream network, including RGB spatial and optical-flow CNNs. Tran et al. [14] explored 3D CNNs with a kernel size of 3×3×3 to learn both the spatial and temporal features with 3D convolution operations. Sun et al. [15] decomposed 3D convolutions into 2D spatial and 1D temporal convolutions. Carreira et al. [16] proposed converting a pre-trained Inception-V1 [17] model to 3D by inflating all the kernels with an additional temporal dimension. They achieved this by repeating the weights of 2D filters N times. All these structures have fixed temporal 3D convolution kernel depths throughout the whole architecture, that make them incapable of capturing short, mid, and long temporal ranges.

In this work, we strive to take a step towards the goal of automatic pain intensity estimation by developing a novel 3D convolutional model. We propose a 3D deep convolutional neural network that captures both the appearance and temporal information of videos in different temporal ranges by incorporating several temporal kernel depths. Our model learns the spatiotemporal representation of facial pain expression throughout its deep architecture and is trained end-to-end. We validate the effectiveness of our proposed model on automatic pain intensity estimation using a benchmarking and widely used database.

where σ denotes the ReLu non-linearty and ⋃ stands for concatenation operation. ¯p is the average pooling operator.

For pain intensity estimation, the model should make a continuous-valued prediction. Therefore, instead of cross-entropy loss function which is frequently used for classification in deep architectures, we use the mean squared error function to turn it into a regression problem. We calculate the Euclidean distance between the predicted output

^o and the actual one o

to obtain the error. The training is carried out using Stochastic Gradient Descent (SGD) and the backpropagation.

where K is the total number of predictions for the given video sequence.

In this section, we perform a series of extensive comparative experiments to evaluate the effectiveness of the proposed model for automatic pain intensity estimation on the widely used UNBC-McMaster Shoulder Pain Expression Archive database [18]. The database includes facial videos of individuals who were performing a series of active and passive range-of-motion tests to their either affected or unaffected limbs on two sessions. Figure 2 shows some samples from this database. Each video sequence was annotated in a frame-level fashion by FACS, resulting in 16 discrete pain intensity levels (0-15) based on facial Action Units (AUs). In our experiments, we used the active tests set that includes 200 videos of 25 subjects with 48,398 frames of the size 320×240 pixels.

We adjust the appropriate values for the hyper-parameters by performing a grid search and following the guidelines in [19]. We use the Area Under the Curve (AUC) as the accuracy metric. We build our model by stacking multiple consecutive convolutional modules (see Section II). In each architecture, we change the number of the parallel 3D convolution kernels to determine the appropriate temporal range that is required to be captured. Figure 3 shows the normalized accuracy of the proposed method for different network sizes and the number of 3D parallel convolution kernels. It can be seen that the highest accuracy is obtained when the number of parallel 3D convolutions and the model’s depth are set to 3 and 17, respectively. Therefore, our model has 53 layers including convolution, average pooling, and fully connected layers. In our framework, the parallel 3D convolutions of each module are considered as one layer, as their input is the same and their output feature maps are concatenated into a single tensor.

In addition, the size of the receptive field of the kernels determines the amount of the information that the model captures. Proper kernel’s structure plays a crucial role in capturing detailed information for an effective representation. Hence, we conducted some experiments to find the optimal size of the receptive field. Table I reports the accuracy of the proposed model on a range of receptive field’s sizes. The highest accuracy belongs to the model with the spatial kernel size of 3×3. From these results, we can conclude that the larger the spatial size of the kernels, coarser information is captured, resulting in poor video representation in this framework.

Based on the achieved results in this section, the proposed model reaches its optimal performance with 17 convolutional modules where each of them has 3 parallel 3D kernels with the spatial receptive field of the size 3×3. Moreover, the temporal depth of the input is set to 32 frames. We use these settings in all the remaining experiments. For training the model, we conform to the weight initialization strategy in [20]. Moreover, we use Stochastic Gradient Descent (SGD) with a momentum of 0.9, weight decay of 10−4

Iii-B Comparison with the state-of-the-art

In this section, we evaluate the effectiveness of the proposed model by comparing its performance with the recent state-of-the-art methods in automatic pain intensity estimation on the UNBC-McMaster database [18]. In order to make a fair comparison with the benchmark methods, we report the Mean Squared Error (MSE), the Pearson Correlation Coefficient (PCC), and the Intra-Class Correlation Coefficient (ICC).

Table III compares the proposed method with benchmark approaches. The proposed model shows a promising performance compared to the state-of-the-art methods. As can be seen, the proposed method consistently outperforms the existing benchmark approaches by a large margin both in terms of MSE, PCC, and ICC. It significantly reduces the MSE by 0.18 compared to the basic 3D CNN [14]. In addition, its high PCC reveals that the proposed method is able to effectively extract detailed information from the face structure for pain intensity estimation. Moreover, the obtained high ICC demonstrates strong resemblance in each level of pain despite the subject’s identity in the leave-one-subject-out cross-validation.

To gain better insights into the effectiveness of the proposed method, Figure 4 shows the number of frames whose pain intensity level has been correctly predicted versus the total number of frames for each subject.

Automatic pain assessment plays a crucial role in the healthcare applications, especially disease diagnosis. This paper introduced a novel deep architecture to represent the facial video for pain intensity estimation. The proposed model extracts the detailed spatiotemporal information of spontaneous variations in the face expression by exploiting several parallel 3D convolution operations with divers temporal depths. Unlike 3D convolutional neural networks with fixed 3D homogeneous kernel depths, our proposed architecture captures short, mid, and long-range spatiotemporal variations that allow representing the spontaneous facial variations more effectively. Feeding the obtained representation of the given video to a regressor, we estimate the level of pain intensity. Our extensive experiments on the UNBC-McMaster Shoulder Pain Expression Archive database showed the effectiveness of the proposed method in the automatic pain intensity estimation. As a future work, we plan to explore the generalization of our model on other face analysis tasks.