We propose a method due to Nitsche (Deep Nitsche Method) from 1970s to deal with the essential boundary conditions encountered in the deep learning-based numerical method without significant extra computational costs. The method inherits several advantages from Deep Ritz Method <cit.> while successfully overcomes the difficulties in treatment of the essential boundary conditions. We illustrate the method on several representative problems posed in at most 100 dimensions with complicated boundary conditions. The numerical results clearly show that the Deep Nitsche Method is naturally nonlinear, naturally adaptive and has the potential to work on rather high dimensions. 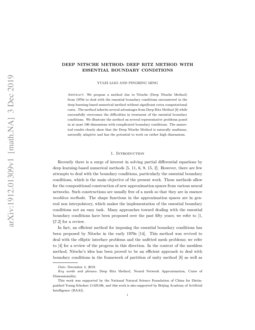 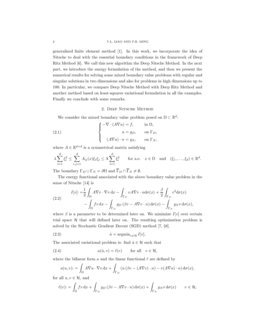 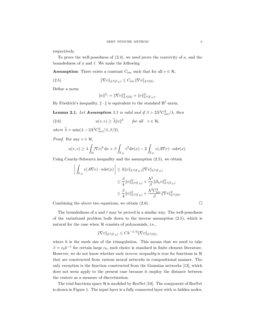 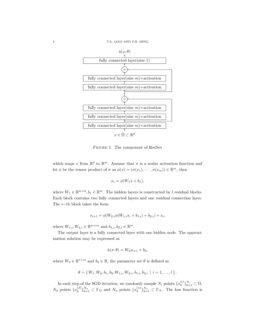 This work is devoted to the structure of the time-discrete Green-Naghdi ...
Sebastian Noelle, et al. ∙

In this paper we consider a numerical homogenization technique for curl-...
Patrick Henning, et al. ∙

Mistakes in binary conditions are a source of error in many software sys...
Hendrig Sellik, et al. ∙

Reflectionless propagation of Manakov solitons on a line:A model based on the concept of transparent boundary conditions

We consider the problem of absence of backscattering in the transport of...
K. K. Sabirov, et al. ∙

We present and analyze a method for thin plates based on cut Bogner-Fox-...
Erik Burman, et al. ∙

In fact, an efficient method for imposing the essential boundary conditions has been proposed by Nitsche in the early 1970s [14]. This method was revived to deal with the elliptic interface problems and the unfitted mesh problems; we refer to [4] for a review of the progress in this direction. In the context of the meshless method, Nitsche’s idea has been proved to be an efficient approach to deal with boundary conditions in the framework of partition of unity method [8] as well as generalized finite element method [1]. In this work, we incorporate the idea of Nitsche to deal with the essential boundary conditions in the framework of Deep Ritz Method [6]. We call this new algorithm the Deep Nitsche Method. In the next part, we introduce the energy formulation of the method, and then we present the numerical results for solving some mixed boundary value problems with regular and singular solutions in two dimensions and also for problems in high dimensions up to 100. In particular, we compare Deep Nitsche Method with Deep Ritz Method and another method based on least-squares variational formulation in all the examples. Finally we conclude with some remarks.

We consider the mixed boundary value problem posed on Ω⊂Rd:

where A∈Rd×d is a symmetrical matrix satisfying

where β is a parameter to be determined later on. We minimize I[v] over certain trial space H that will defined later on. The resulting optimization problem is solved by the Stochastic Gradient Decent (SGD) method [7, §8].

The associated variational problem is: find ^u∈H such that

To prove the well-posedness of (2.4), we need prove the coercivity of a, and the boundedness of a and ℓ. We make the following Assumption: There exists a constant Cinv such that for all v∈H,

By Friedrich’s inequality, ∥⋅∥ is equivalent to the standard H1-norm.

Using Cauchy-Schwartz inequality and the assumption (2.5), we obtain

Combining the above two equations, we obtain (2.6). ∎

The boundedness of a and ℓ may be proved in a similar way. The well-posedness of the variational problem boils down to the inverse assumption (2.5), which is natural for the case when H consists of polynomials, i.e.,

where h is the mesh size of the triangulation. This means that we need to take β=c0h−1 for certain large c0, such choice is standard in finite element literature. However, we do not know whether such inverse inequality is true for functions in H that are constructed from various neural networks in compositional manner. The only exception is the function constructed from the Gaussian networks [13], which does not seem apply to the present case because it employ the distance between the centers as a measure of discretization.

The trial functions space H is modeled by ResNet [10]. The component of ResNet is shown in Figure 1. The input layer is a fully connected layer with m hidden nodes, which maps x from Rd to Rm. Assume that σ

is a scalar activation function and let

be the tensor product of

where W1∈Rm×d,b1∈Rm. The hidden layers is constructed by l

The output layer is a fully connected layer with one hidden node. The approximation solution may be expressed as

where W2∈R1×m and b2∈R, the parameter set θ is defined as

In each step of the SGD iteration, we randomly sample Ni points {x(i)k}Nik=1⊂Ω, Nd points {x(d)k}Ndk=1⊂ΓD and Nn points {x(n)k}Nnk=1⊂ΓN

. The loss function is defined as

We apply the Deep Nitsche Method to solve the mixed boundary value problem (2.1), and compare it with two known methods such as Deep Ritz Method in [6] and a deep learning-based least-squares method [15], which at least dates back to [3] in finite element method. The energy functional associated with boundary value problem (2.1) for Deep Ritz Method reads as

and the energy functional associated with the Least-squares is

In all the examples, we let Ω be the unit hypercube as Ω=(0,1)d and the activation function σ=tanh.

The solution u is approximated by a neural network with five residual blocks and ten hidden nodes per fully connected layer. Noticing that one residual block contains two fully connected layers and one residual connection, the number of trainable parameters is 1141. An Adam optimizer is employed to train with the learning rate 0.001 [12]. We train the model for 50000epochs. In each epoch, we randomly sample 128 points inside the domain Ω and 33 points on each edge of ∂Ω.

In the first example, we solve the Laplace equation with a smooth solution

in Table 1 for three methods with different penalized parameters β.

In the second example, we consider

where Ω=(−1,1)2∖[0,1)2 is an L-shaped domain. This problem admits an analytical solution u(x)=u(r,θ)=r1/2sin(θ/2), which belongs to Hs(Ω) with s<3/2. In fact, such solution usually stands for the singular part of the general situation [16]. We report the errors in Table 2. We have not computed the error in H2 norm because ∥u∥H2 is obviously unbounded.

In view of Table 2, it seems that all three methods are robust with respect to the parameter β, and Deep Nitsche method seems the most accurate method for approximating the singular solution.

In the last example in two dimensions, we test problem with a nonconstant coefficient matrix A. The set up is the same with the previous example. Let

In view of Table 3, it seems all methods are quite robust with respect to the penalized parameter, and the least-squares gives the best results even in case of large β.

We turn to problems in high dimensions in this part. We still employ an Adam optimizer with the learning rate 0.001 and train the model for 50000 epochs. In each epoch, we randomly sample 512 points in Ω and 16 points on each face of ∂Ω.

In the first example, we consider a less smooth solution in 20 dimensions

with a pure Dirichlet boundary condition. We calculate f and gD by (2.1). This example has been test in [8] with a particle-partition of unit method. We approximate the solution by a neural network with five residual blocks and 50 hidden nodes per fully connected layer. Thus the number of trainable parameters is 26601. We report the relative errors in Table 4.

In view of Table 4, we observe that all three methods give comparable results and all three methods are even more robust with respect to the penalized parameter β. The same conclusion is valid for the next example for higher dimensions.

In the second example, we consider a smooth solution in 100 dimensions.

with a pure Dirichlet boundary condition. We compute f and gD by (2.1). The exact solution u is approximated by a neural network with five residual blocks and 100 hidden nodes per fully connected layer, and the number of trainable parameters is 111201. We report the relative errors in Table 5. It shows that our method has potential to work for rather high dimensions.

Based on Nitsche’s idea and representing the trial functions by deep neural network, we propose a new method to deal with the complicated boundary conditions. The test examples show that the method has the following advantages:

We also systematically compare Deep Nitsche Method with Deep Ritz Method and least-squares method for regular as well as singular solution, for low dimensional problems as well as high dimensional problems. It seems that the new method is comparable to these two methods, while it is slightly more accurate for singular solution. There are still several issues we have not addressed such as the influence of the network structures and a systematical method to improve the accuracy, which will be pursued in our future work.