This work summarizes our submission for the Task 3: Disease Classification of ISIC 2018 challenge in Skin Lesion Analysis Towards Melanoma Detection. We use a novel deep neural network (DNN) ensemble architecture introduced by us that can effectively classify skin lesions by using data-augmentation and bagging to address paucity of data and prevent over-fitting. The ensemble is composed of two DNN architectures: Inception-v4 and Inception-Resnet-v2. The DNN architectures are combined in to an ensemble by using a 1×1 convolution for fusion in a meta-learning layer. 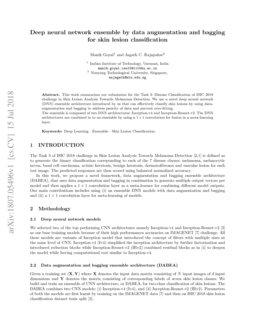 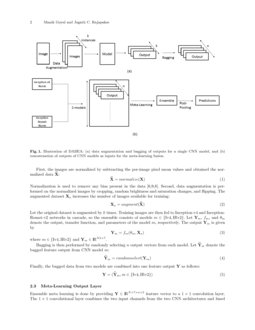 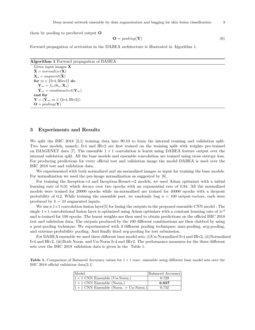 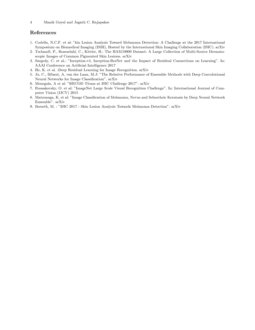 The Task 3 of ISIC 2018 challenge in Skin Lesion Analysis Towards Melanoma Detection [2, 1] is defined as to generate the binary classification corresponding to each of the 7 disease classes: melanoma, melanocytic nevus, basal cell carcinoma, actinic keratosis, benign keratosis, dermatofibroma and vascular lesion for each test image. The predicted responses are then scored using balanced normalized accuracy.

[7] challenge. All these models are variants of Inception model that introduced the concept of filters with multiple sizes at the same level of CNN. Inception-v4 (Iv4) simplified the inception architecture by further factorization and introduced reduction blocks while Inception-Resnet-v2 (IRv2) combined residual blocks as in [4] to deepen the model while having computational cost similar to Inception-v4.

Given a training set (X,Y) where X denotes the input data matrix consisting of N input images of d input dimensions and Y denotes the matrix consisting of corresponding labels of seven skin lesion classes. We build and train an ensemble of CNN architecture, or DABEA, for two-class classification of skin lesions. The DABEA combines two CNN models: (i) Inception-v4 (Iv4), and (ii) Inception-Resnet-v2 (IRv2). Parameters of both the models are first learnt by training on the IMAGENET data [7] and then on ISIC 2018 skin lesion classification dataset train split [2].

First, the images are normalized by subtracting the per-image pixel mean values and obtained the normalized data ˜X:

Normalization is used to remove any bias present in the data [6, 9, 8]. Second, data augmentation is performed on the normalized images by cropping, random brightness and saturation changes, and flipping. The augmented dataset Xa increases the number of images available for training:

Let the original dataset is augmented by k times. Training images are then fed to Inception-v4 and Inception-Resnet-v2 networks in cascade, so the ensemble consists of models m∈{Iv4,IRv2}. Let Ym, fm, and θm denote the output, transfer function, and parameters of the model m, respectively. The output Ym is given by

Finally, the bagged data from two models are combined into one feature output Y as follows:

Ensemble meta learning is done by providing Y∈IRN×7×n×2 feature vector to a 1×1 convolution layer. The 1×1 convolutional layer combines the two input channels from the two CNN architectures and fused them by pooling to produced output O

Forward propagation of activation in the DABEA architecture is illustrated in Algorithm 1.

We experimented with both normalized and un-normalized images as input for training the base models. For normalization we used the per-image normalization as suggested by [6].

For training the Inception-v4 and Inception-Resnet-v2 models, we used Adam optimizer with a initial learning rate of 0.01 which decays over two epochs with an exponential rate of 0.94. All the normalized models were trained for 20000 epochs while un-normalized are trained for 40000 epochs with a dropout probability of 0.2. While training the ensemble part, we randomly bag

n=100 output-vectors, each were produced by k=10 augmented inputs.

and is trained for 100 epochs. The learnt weights are then used to obtain predictions on the official ISIC 2018 test and validation data. The outputs produced by the 100 different combinations are then clubbed by using a post-pooling technique. We experimented with 3 different pooling techniques: max-pooling, avg-pooling, and extreme-probability pooling. And finally fixed avg-pooling for test submission.