Automated segmentation of retinal blood vessels in label-free fundus images entails a pivotal role in computed aided diagnosis of ophthalmic pathologies, viz., diabetic retinopathy, hypertensive disorders and cardiovascular diseases. The challenge remains active in medical image analysis research due to varied distribution of blood vessels, which manifest variations in their dimensions of physical appearance against a noisy background. In this paper we formulate the segmentation challenge as a classification task. Specifically, we employ unsupervised hierarchical feature learning using ensemble of two level of sparsely trained denoised stacked autoencoder. First level training with bootstrap samples ensures decoupling and second level ensemble formed by different network architectures ensures architectural revision. We show that ensemble training of auto-encoders fosters diversity in learning dictionary of visual kernels for vessel segmentation. SoftMax classifier is used for fine tuning each member auto-encoder and multiple strategies are explored for 2-level fusion of ensemble members. On DRIVE dataset, we achieve maximum average accuracy of 95.33% with an impressively low standard deviation of 0.003 and Kappa agreement coefficient of 0.708 . Comparison with other major algorithms substantiates the high efficacy of our model. 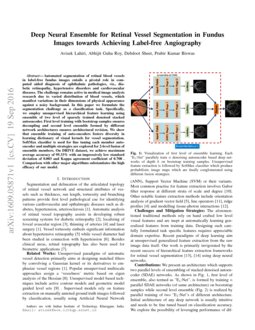 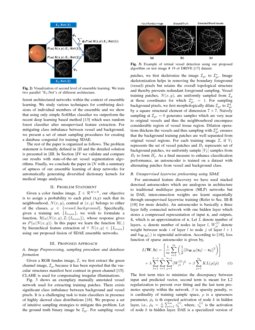 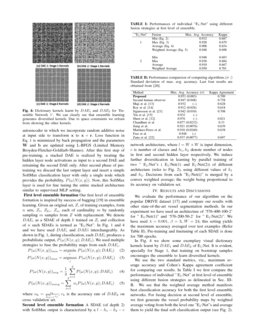 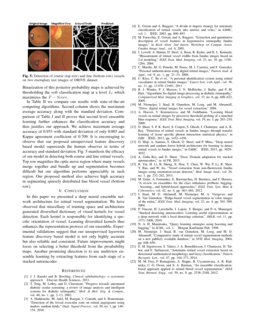 Vision impairment due to pathological damage of the retina can largely b...
Debapriya Maji, et al. ∙

Contributions: We present an architecture which supports two parallel levels of ensembling of stacked denoised autoencoder (SDAE) networks. As shown in Fig. 1, first level of ensemble, also termed as ”E1:Net”, is formed by training n parallel SDAE networks (of same architecture) on booststrap samples while second level ensemble (Fig. 2) is realized by parallel training of two ”E1:Net”s of different architecture. Initial architecture of any deep network is usually intuitive and needs to be fine tuned based on classification accuracy. We explore the possibility of leveraging performance of different architectured networks within the context of ensemble learning. We study various techniques for combining decisions of individual members of the ensemble and we show that using only simple SoftMax classifier we outperform the recent deep learning based method [13]

which uses random forest classifier after unsupervised feature extraction. For mitigating class imbalance between vessel and background, we present a set of smart sampling procedures for creating a database congenial for training SDAE.

The rest of the paper is organized as follows. The problem statement is formally defined in §II and the detailed solution is presented in §III. In Section §IV we validate and compare our results with state-of-the-art vessel segmentation algorithms. Finally, we conclude the paper in §V with a summary of aptness of our ensemble learning of deep networks for automatically generating diversified dictionary kernels for medical image analysis.

Given a color fundus image, I∈RM×N

, our objective is to assign a probability to each pixel (x,y) such that its neighbourhood,

N(x,y), centred at (x,y) belongs to either of the classes, ω∈{vessel,background}. Specifically, given a training set, {Itrain}, we wish to formulate a function, H(ω|N(x,y),I;{Itrain}), whose response gives us P(ω|N(x,y)). In this paper we learn the function H(.) by hierarchical feature extraction of ∀ N(x,y)∈{Itrain} using our proposed fusion of SDAE ensemble networks.

Given a RGB fundus image, I, we first extract the green channel image, Ig, because it has been reported that the vascular structures manifest best contrast in green channel [15]. CLAHE is used for compensating irregular illuminations.

[16]. We propose a set of intuitive sampling strategies to mitigate this problem. Let the ground truth binary image be Igr. For sampling vessel patches, we first skeletonize the image Igr to Isgr. Image skeletonization helps in removing the boundary foreground (vessel) pixels but retains the overall topological structure and thereby prevents redundant foreground sampling. Vessel training patches, N(x,y), are uniformly sampled from Ig at those coordinates for which Isgr=1. For sampling background pixels, we first morphologically dilate Igr to Idgr by a square structural element of dimension 7×7. Naively sampling at Igr=0 generates samples which are very near to original vessels and thus the neighbourhood encompass considerable region of vessel tissue region. Dilation operations thickens the vessels and thus sampling with Idgr ensures that the background training patches are well separated from original vessel regions. For each training image I, if VI represents the set of vessel patches and BI represents set of background patches, we uniformly sample |VI| samples from BI to form B′I. As a final measure to enhance classification performance, an autoencoder is trained on a dataset with alternating patches from vessel and background class.

For automated feature discovery we have used stacked denoised autoencoders which are analogous in architecture to traditional multilayer perceptron (MLP) networks but in DAE, interconnection weights are learnt sequentially through unsupervised layerwise training (Refer to Sec. III-B

[18] for more details). An autoencoder is basically a three layer fully connected network with one hidden layer which stores a compressed representation of input x, and outputs, ^x, which is an approximation of x. Let L denote number of layers, sl denote number of nodes in layer l, W(l)ji denote weight between node i of layer l to node j of layer l+1 and hW,b(.) is sigmoidal activation. According to [18]

, loss function of sparse autoencoder is given by,

The first term tries to minimize the discrepancy between input and predicted vector, second term is meant for L2 regularization to prevent over fitting and the last term promotes sparsity within the network. β is sparsity penalty, m is cardinality of training sample space, ρ is a sparseness parameter, ¯ρk is th expected activation of node k in hidden layer, i.e., ¯ρk=1m∑mi=1z(i)k, where, z(i)k is the activation of node k in hidden layer. DAE is a specialized version of autoencoder in which we incorporate random additive noise at input side to transform x to x+r. Loss function in Eq. 1 is minimized by back propagation and the parameters W and b are updated using L-BFGS (Limited Memory Broyden-Fletcher-Goldfarb-Shanno). After this first step of pre-training, a stacked DAE is realized by treating the hidden layer node activations as input to a second DAE and retraining the second DAE only. After second phase of pre-training we discard the last output layer and insert a simple SoftMax classification layer with only a single node which provides the probability, P(ω|N(x,y))

First level ensemble formation Our first level of ensemble formation is inspired by success of bagging [19] in ensemble learning. Given an original set, Z, of training examples, form n sets, Z1, Z2,.. Zn, each of cardinality m by randomly sampling m samples from Z with replacement. We denote DAEi as a SDAE of depth k trained on Zi and collection of n such SDAEs is termed as ”E1:Net”. In Fig. 1 and 4 and we have used DAEi and DAEi interchangeably. As shown in Fig. 1, during classification, each DAEi produces a probabilistic output, P(ω|N(x,y);DAEi). We used multiple strategies to fuse the probability maps from each DAEi.

where αk=rk∑3j=1rj; rk is the accuracy rate of DAEk on cross validation set. Second level ensemble formation A SDAE (of depth 2) with SoftMax output is characterized by a l−h1−h2−c network architecture, where l=W×W is input dimension, c is number of classes and h1,h2 denote number of nodes in first and second hidden layer respectively. We induce further diversification in learning by parallel training of two ” E1:Net”s ( E1:Net(1) and E1:Net(2)) of different architecture (refer to Fig. 2), using different values of h1 and h2. Decisions from each ”E1:Net(i)” is merged by a convex weighted average; the weight being proportional to its accuracy on validation set.

). Pre-training and finetuning of each SDAE is done for 700 epochs.

In Fig. 4 we show some exemplary visual dictionary kernels learnt by DAE1 and DAE2 of E1:Net. It is evident, specially for Stage 1, that training on bootstrap samples encourages the ensemble to learn diversified kernels.

We use the two standard metrics, viz., maximum average accuracy and Cohen’s Kappa agreement coefficient for comparing our results. In Table I we first compare the performance of individual ” E1:Net” at first level of ensemble using different fusion strategies as delineated in Sec. 4.

). Binarization of this posterior probability maps is achieved by thresholding the soft classification map at a level

Lt which maximizes the F−Score.

In Table II we compare our results with state-of-the-art competing algorithms. Second column shows the maximum average accuracy along with the standard deviation. Comparison of Table I and II proves that second level ensemble learning further enhances the classification accuracy and thus justifies our approach. We achieve maximum average accuracy of 0.953 with standard deviation of only 0.003 and Kappa agreement coefficient of 0.709. It is encouraging to observe that our proposed unsupervised feature discovery based model superceeds the human observer in terms of accuracy and standard deviation. Fig. 5 manifests the efficacy of our model in detecting both course and fine retinal vessels. Top row magnifies the optic nerve region where many vessels merge together and bundle up and segmentation becomes difficult but our algorithm performs appreciably in such region. Our proposed method also achieves high accuracy in segmenting sparsely distributed fine blood vessel (bottom row).

In this paper we presented a deep neural ensemble network architecture for retinal vessel segmentation. We have observed that miscellany of training space and architecture generated diversified dictionary of visual kernels for vessel detection. Each kernel is responsible for identifying a specific orientation of vessel. Learning diversified kernels thus enhances the representation prowess of our ensemble. Experimental validations suggest that our unsupervised layerwise feature discovery based model is not only highly accurate but also reliable and consistent. Future improvements might focus on selecting a better threshold from the proabability maps. Another promising direction is to use multiview ensemble learning by extracting features from each stage of a stacked autoencoder.