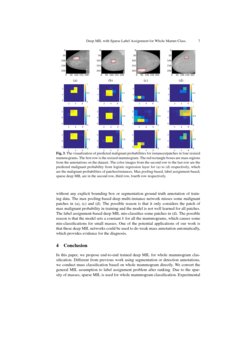 According to the American Cancer Society, breast cancer is the most frequently diagnosed solid cancer and the second leading cause of cancer death among U.S. women [1]. Mammogram screening has been demonstrated to be an effective way for early detection and diagnosis, which can significantly decrease breast cancer mortality [15]. Traditional mammogram classification requires extra annotations such as bounding box for detection or mask ground truth for segmentation [17, 5, 11]. Other work have employed different deep networks to detect ROIs and obtain mass boundaries in different stages [6]. However, these methods require hand-crafted features to complement the system [12], and training data to be annotated with bounding boxes and segmentation ground truths which require expert domain knowledge and costly effort to obtain. In addition, multi-stage training cannot fully explore the power of deep networks.

. The above approaches used max pooling to model the general multi-instance assumption which only considers the patch of max probability. In this paper, more effective task-related deep multi-instance models with end-to-end training are explored for whole mammogram classification. We investigate three different schemes, i.e., max pooling, label assignment, and sparsity, to perform deep MIL for the whole mammogram classification task.

The framework for our proposed end-to-end trained deep MIL for mammogram classification is shown in Fig. 1. To fully explore the power of deep MIL, we convert the traditional MIL assumption into a label assignment problem. As a mass typically composes only 2% of a whole mammogram (see Fig. 2), we further propose sparse deep MIL. The proposed deep multi-instance networks are shown to provide robust performance for whole mammogram classification on the INbreast dataset [14].

Unlike other deep multi-instance networks [18, 10], we use a CNN to efficiently obtain features of all patches (instances) at the same time. Given an image I, we obtain a much smaller feature map F of multi-channels Nc after multiple convolutional layers and max pooling layers. The (F)i,j,: represents deep CNN features for a patch Qi,j in I, where i,j represents the pixel row and column index respectively.

The goal of our work is to predict whether a whole mammogram contains a malignant mass (BI-RADS ∈{4,5,6} as positive) or not, which is a standard binary classification problem. We add a logistic regression with weights shared across all the pixel positions following F

, and an element-wise sigmoid activation function is applied to the output. To clarify it, the malignant probability of feature space’s pixel

where a is the weights in logistic regression, b is the bias, and ⋅

is the inner product of the two vectors

a and Fi,j,:. The a and b are shared for different pixel positions i,j. We can combine ri,j into a matrix r=(ri,j) of range [0,1] denoting the probabilities of patches being malignant masses. The r can be flattened into a one-dimensional vector as r=(r1,r2,...,rm) corresponding to flattened patches (Q1,Q2,...,Qm), where m is the number of patches.

should be classified as positive. Likewise, negative mammogram

I should not have any malignant masses. If we treat each patch Qi of I as an instance, the whole mammogram classification is a standard multi-instance task.

where θ is the weights in deep networks.

If we sort r first in descending order as illustrated in Fig. 1, the malignant probability of the whole mammogram I is the first element of ranked r as

where r′=(r′1,r′2,...,r′m) is descending ranked r. The cross entropy-based cost function can be defined as

where N is the total number of mammograms, yn∈{0,1} is the true label of malignancy for mammogram In, and λ is the regularizer that controls model complexity.

One disadvantage of max pooling-based MIL is that it only considers the patch Q′1, and does not exploit information from other patches. A more powerful framework should add task-related priori, such as sparsity of mass in whole mammogram, into the general multi-instance assumption and explore more patches for training.

For the conventional classification tasks, we assign a label to each data point. In the MIL scheme, if we consider each instance (patch) Qi as a data point for classification, we can convert the multi-instance learning problem into a label assignment problem.

After the ranking/sorting layer using the first equation in Eq. 3, we can obtain the malignant probability for each patch

One advantage of the label assignment-based MIL is that it explores all the patches to train the model. Essentially it acts a kind of data augmentation which is an effective technique to train deep networks when the training data is scarce. From the sparsity perspective, the optimization problem of label assignment-based MIL is exactly a k-sparse problem for the positive data points, where we expect {r′1,r′2,...,r′k} being 1 and {r′k+1,r′k+2,...,r′m}

being 0. The disadvantage of label assignment-based MIL is that it is hard to estimate the hyper-parameter

k. Thus, a relaxed assumption for the MIL or an adaptive way to estimate the hyper-parameter k is preferred.

From the mass distribution, the mass typically comprises about 2% of the whole mammogram on average (Fig. 2), which means the mass region is quite sparse in the whole mammogram. It is straightforward to convert the mass sparsity to the malignant mass sparsity, which implies that {r′1,r′2,...,r′m} is sparse in the whole mammogram classification problem. The sparsity constraint means we expect the malignant probability of part patches r′i being 0 or close to 0, which is equivalent to the second assumption in the label assignment-based MIL. Analogously, we expect r′1 to be indicative of the true label of mammogram I.

After the above discussion, the loss function of sparse MIL problem can be defined

where p(yn|In,θ) can be calculated in Eq. 3, rn=(r′1,r′2,...,r′m) for mammogram In, ∥⋅∥1 denotes the L1 norm, μ is the sparsity factor, which is a trade-off between the sparsity assumption and the importance of patch Q′1.

From the discussion of label assignment-based MIL, this learning is a kind of exact k-sparse problem which can be converted to L1 constrain. One advantage of sparse MIL over label assignment-based MIL is that it does not require assign label for each patch which is hard to do for patches where probabilities are not too large or small. The sparse MIL considers the overall statistical property of r

Another advantage of sparse MIL is that, it has different weights for general MIL assumption (the first part loss) and label distribution within mammogram (the second part loss), which can be considered as a trade-off between max pooling-based MIL (slack assumption) and label assignment-based MIL (hard assumption).

We validate the proposed models on the most frequently used mammographic mass classification dataset, INbreast dataset [14], as the mammograms in other datasets, such as DDSM dataset [4], are of low quality. The INbreast dataset contains 410 mammograms of which 100 containing malignant masses. These 100 mammograms with malignant masses are defined as positive. For fair comparison, we also use 5-fold cross validation to evaluate model performance as [6]. For each testing fold, we use three folds for training, and one fold for validation to tune hyper-parameters. The performance is reported as the average of five testing results obtained from cross-validation.

50×50 square box as 0. In experiments, the data augmentation is essential for us to train the deep networks.

For the CNN network structure, we use AlexNet and remove the fully connected layers [13]. Through CNN, the mammogram of size 227×227 becomes 256 6×6 feature maps. Then we use steps in Sec. 2

to do MIL. Here we employ weights pretrained on the ImageNet due to the scarce of data. We use Adam optimization with learning rate

We firstly compare our methods to previous models validated on DDSM dataset and INbreast dataset in Table 1. Previous hand-crafted feature-based methods require manually annotated detection bounding box or segmentation ground truth even in test denoting as manual [3, 17, 8]. The feat. denotes requiring hand-crafted features. Pretrained CNN uses two CNNs to detect the mass region and segment the mass, followed by a third CNN to do mass classification on the detected ROI region, which requires hand-crafted features to pretrain the network and needs multi-stages training[6]

The max pooling-based deep MIL obtains better performance than the pretrained CNN using 3 different CNNs and detection/segmentation annotation in the training set. This shows the superiority of our end-to-end trained deep MIL for whole mammogram classification. According to the accuracy metric, the sparse deep MIL is better than the label assignment-based MIL, which is better than the max pooling-based MIL. This result is consistent with previous discussion that the sparsity assumption benefited from not having hard constraints of the label assignment assumption, which employs all the patches and is more efficient than max pooling assumption. Our sparse deep MIL achieves competitive accuracy to random forest-based pretrained CNN, while much higher AUC than previous work, which shows our method is more robust. The main reasons for the robust results using our models are as follows. Firstly, data augmentation is an important technique to increase scarce training datasets and proves useful here. Secondly, the transfer learning that employs the pretrained weights from ImageNet is effective for the INBreast dataset. Thirdly, our models fully explore all the patches to train our deep networks thereby eliminating any possibility of overlooking malignant patches by only considering a subset of patches. This is a distinct advantage over previous networks employing several stages.

To further understand our deep MIL, we visualize the responses of logistic regression layer for four mammograms on test set, which represents the malignant probability of each patch, in Fig. 3. We can see the deep MIL learns not only the prediction of whole mammogram, but also the prediction of malignant patches within the whole mammogram. Our models are able to learn the mass region of the whole mammogram without any explicit bounding box or segmentation ground truth annotation of training data. The max pooling-based deep multi-instance network misses some malignant patches in (a), (c) and (d). The possible reason is that it only considers the patch of max malignant probability in training and the model is not well learned for all patches. The label assignment-based deep MIL mis-classifies some patches in (d). The possible reason is that the model sets a constant k for all the mammograms, which causes some mis-classifications for small masses. One of the potential applications of our work is that these deep MIL networks could be used to do weak mass annotation automatically, which provides evidence for the diagnosis.

In future work, we plan to extend the current work by: 1) incorporating multi-scale modeling such as spatial pyramid to further improve whole mammogram classification, 2) employing the deep MIL to do annotation or provide potential malignant patches to assist diagnoses, and 3) applying to large datasets if the big dataset is available.