Deep learning has proven itself as a successful set of models for learning useful semantic representations of data. These, however, are mostly implicitly learned as part of a classification task. In this paper we propose the triplet network model, which aims to learn useful representations by distance comparisons. A similar model was defined by Wang et al. (2014), tailor made for learning a ranking for image information retrieval. Here we demonstrate using various datasets that our model learns a better representation than that of its immediate competitor, the Siamese network. We also discuss future possible usage as a framework for unsupervised learning. 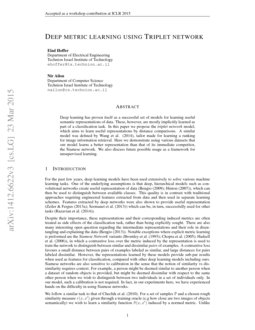 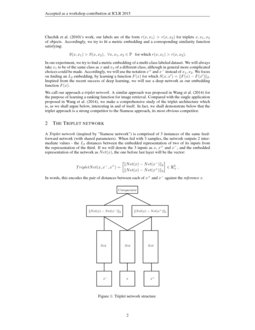 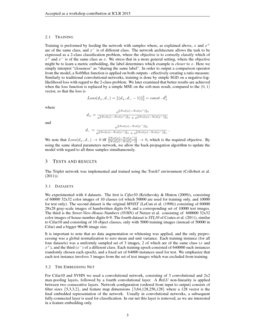 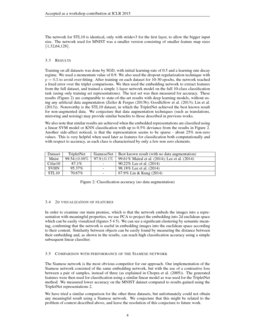 In this paper, we study the problem of evaluating the addition of elemen...
Timo Bertram, et al. ∙

Hashing is one of the most efficient techniques for approximate nearest ...
Jithin James, et al. ∙

For the past few years, deep learning models have been used extensively to solve various machine learning tasks. One of the underlying assumptions is that deep, hierarchical models such as convolutional networks create useful representation of data (

), which can then be used to distinguish between available classes. This quality is in contrast with traditional approaches requiring engineered features extracted from data and then used in separate learning schemes. Features extracted by deep networks were also shown to provide useful representation (

Despite their importance, these representations and their corresponding induced metrics are often treated as side effects of the classification task, rather than being explicitly sought. There are also many interesting open question regarding the intermediate representations and their role in disentangling and explaining the data (Bengio (2013)). Notable exceptions where explicit metric learning is preformed are the Siamese Network variants (Bromley et al. (1993); Chopra et al. (2005); Hadsell et al. (2006)), in which a contrastive loss over the metric induced by the representation is used to train the network to distinguish between similar and dissimilar pairs of examples. A contrastive loss favours a small distance between pairs of examples labeled as similar, and large distances for pairs labeled dissimilar. However, the representations learned by these models provide sub-par results when used as features for classification, compared with other deep learning models including ours. Siamese networks are also sensitive to calibration in the sense that the notion of similarity vs dissimilarity requires context. For example, a person might be deemed similar to another person when a dataset of random objects is provided, but might be deemed dissimilar with respect to the same other person when we wish to distinguish between two individuals in a set of individuals only. In our model, such a calibration is not required. In fact, in our experiments here, we have experienced hands on the difficulty in using Siamese networks.

We follow a similar task to that of Chechik et al. (2010). For a set of samples P and a chosen rough similarity measure r(x,x′) given through a training oracle (e.g how close are two images of objects semantically) we wish to learn a similarity function S(x,x′) induced by a normed metric. Unlike Chechik et al. (2010)’s work, our labels are of the form r(x,x1)>r(x,x2) for triplets x,x1,x2 of objects. Accordingly, we try to fit a metric embedding and a corresponding similarity function satisfying:

In our experiment, we try to find a metric embedding of a multi-class labeled dataset. We will always take x1 to be of the same class as x and x2 of a different class, although in general more complicated choices could be made. Accordingly, we will use the notation x+ and x− instead of x1,x2. We focus on finding an L2 embedding, by learning a function F(x) for which S(x,x′)=∥F(x)−F(x′)∥2. Inspired from the recent success of deep learning, we will use a deep network as our embedding function F(x).

We call our approach a triplet network. A similar approach was proposed in Wang et al. (2014)

for the purpose of learning a ranking function for image retrieval. Compared with the single application proposed in

Wang et al. (2014), we make a comprehensive study of the triplet architecture which is, as we shall argue below, interesting in and of itself. In fact, we shall demonstrate below that the triplet approach is a strong competitor to the Siamese approach, its most obvious competitor.

, the one before last layer will be the vector:

In words, this encodes the pair of distances between each of x+ and x− against the reference x.

Training is preformed by feeding the network with samples where, as explained above, x and x+ are of the same class, and x−

is of different class. The network architecture allows the task to be expressed as a 2-class classification problem, where the objective is to correctly classify which of

x+ and x− is of the same class as x. We stress that in a more general setting, where the objective might be to learn a metric embedding, the label determines which example is closer to x

. Here we simply interpret “closeness” as “sharing the same label”. In order to output a comparison operator from the model, a SoftMax function is applied on both outputs - effectively creating a ratio measure. Similarly to traditional convolutional-networks, training is done by simple SGD on a negative-log-likelihood loss with regard to the 2-class problem. We later examined that better results are achieved when the loss function is replaced by a simple MSE on the soft-max result, compared to the

We note that Loss(d+,d−)→0 iff ∥Net(x)−Net(x+)∥∥Net(x)−Net(x−)∥→0, which is the required objective. By using the same shared parameters network, we allow the back-propagation algorithm to update the model with regard to all three samples simultaneously.

It is important to note that no data augmentation or whitening was applied, and the only preprocessing was a global normalization to zero mean and unit variance. Each training instance (for all four datasets) was a uniformly sampled set of 3 images, 2 of which are of the same class (

) of a different class. Each training epoch consisted of 640000 such instances (randomly chosen each epoch), and a fixed set of 64000 instances used for test. We emphasize that each test instance involves 3 images from the set of test images which was excluded from training.

ReLU non-linearity is applied between two consecutive layers. Network configuration (ordered from input to output) consists of filter sizes {5,3,3,2}, and feature map dimensions {3,64,128,256,128} where a 128 vector is the final embedded representation of the network. Usually in convolutional networks, a subsequent fully-connected layer is used for classification. In our net this layer is removed, as we are interested in a feature embedding only.

The network for STL10 is identical, only with stride=3 for the first layer, to allow the bigger input size. The network used for MNIST was a smaller version consisting of smaller feature map sizes {1,32,64,128}.

Training on all datasets was done by SGD, with initial learning-rate of 0.5 and a learning rate decay regime. We used a momentum value of 0.9. We also used the dropout regularization technique with p=0.5 to avoid over-fitting. After training on each dataset for 10-30 epochs, the network reached a fixed error over the triplet comparisons. We then used the embedding network to extract features from the full dataset, and trained a simple 1-layer network model on the full 10-class classification task (using only training set representations). The test set was then measured for accuracy. These results (Figure 2) are comparable to state-of-the-art results with deep learning models, without using any artificial data augmentation (Zeiler & Fergus (2013b); Goodfellow et al. (2013); Lin et al. (2013)). Noteworthy is the STL10 dataset, in which the TripletNet achieved the best known result for non-augmented data. We conjecture that data augmentation techniques (such as translations, mirroring and noising) may provide similar benefits to those described in previous works.

We also note that similar results are achieved when the embedded representations are classified using a linear SVM model or KNN classification with up to 0.5% deviance from the results in Figure

2. Another side-affect noticed, is that the representation seems to be sparse - about 25% non-zero values. This is very helpful when used later as features for classification both computationally and with respect to accuracy, as each class is characterised by only a few non zero elements.

In order to examine our main premise, which is that the network embeds the images into a representation with meaningful properties, we use PCA to project the embedding into 2d euclidean space which can be easily visualized (figures 5 4 5). We can see a significant clustering by semantic meaning, confirming that the network is useful in embedding images into the euclidean space according to their content. Similarity between objects can be easily found by measuring the distance between their embedding and, as shown in the results, can reach high classification accuracy using a simple subsequent linear classifier.

3.5 Comparison with performance of the Siamese network

The Siamese network is the most obvious competitor for our approach. Our implementation of the Siamese network consisted of the same embedding network, but with the use of a contrastive loss between a pair of samples, instead of three (as explained in Chopra et al. (2005)). The generated features were then used for classification using a similar linear model as was used for the TripletNet method. We measured lower accuracy on the MNIST dataset compared to results gained using the TripletNet representations 2.

We have tried a similar comparison for the other three datasets, but unfortunately could not obtain any meaningful result using a Siamese network. We conjecture that this might be related to the problem of context described above, and leave the resolution of this conjecture to future work.

As the Triplet net model allows learning by comparisons of samples instead of direct data labels, usage as an unsupervised learning model is possible. Future investigations can be performed in several scenarios:

It is also well known that humans tend to be better at accurately providing comparative labels. Our framework can be used in a crowd sourcing learning environment. This can be compared with Tamuz et al. (2011), who used a different approach. Furthermore, it may be easier to collect data trainable on a Triplet network, as comparisons over similarity measures are much easier to attain (pictures taken at the same location, shared annotations, etc).

In this work we introduced the Triplet network model, a tool that uses a deep network to learn useful representation explicitly. The results shown on various datasets provide evidence that the representations that were learned are useful to classification in a way that is comparable with a network that was trained explicitly to classify samples. We believe that enhancement to the embedding network such as Network-in-Network model (Lin et al. (2013)), Inception models (Szegedy et al. (2014)) and others can benefit the Triplet net similarly to the way they benefited other classification tasks. Considering the fact that this method requires to know only that two out of three images are sampled from the same class, rather than knowing what that class is, we think this should be inquired further, and may provide us insights to the way deep networks learn in general. We have also shown how this model learns using only comparative measures instead of labels, which we can use in the future to leverage new data sources for which clear out labels are not known or do not make sense (e.g hierarchical labels).

We gratefully acknowledge the support of NVIDIA Corporation with the donation of the Titan-Z GPU used for this research.