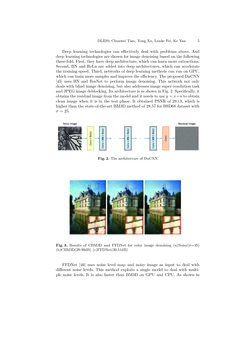 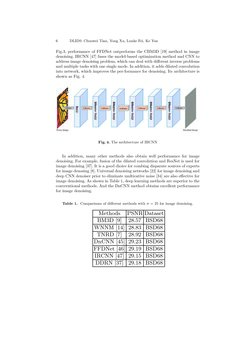 In recent years, researches have shown that deep learning technologies can reply to deeper architecture to automatically learn and find more suitable image features rather than manual setting parameters, which effectively address drawbacks of traditional methods mentioned above [18]. Big data and GPU are also essential for deep learning technologies to improve the learning ability [16]

. The learning ability of deep learning is finished by model (also referred to as network) and the model consists of many layers, including the convolutional layer, pooling layer, batch normalization layer and full connection layer. In other words, deep learning technologies can convert input data (e.g. images, speech and video) into outputs (e.g. object category, password unlocking and traffic information) by the model

[24]. Especially, convolutional neural network (CNN) is one of the most typical and successful deep learning network for image processing [20]. CNN was originated LeNet from 1998 and it was successfully used in hand-written digit recognition, achieving excellent performance [21]

. However, convolutional neural networks (CNNs) haven t been widely used in other real applications before the arise of GPU and big data. In other words, the real success of CNNs attributed to ImageNet Large Scale Visual Recognition Challenge 2012 (ILSVRC 2012) where new CNN was proposed, named AlexNet and became a world champion in this ILSVRC 2012

In subsequent years, deeper neural networks have becoming popular and obtain promising performance for image processing [29]. Karen Simonyan et al. [29] in-creased the depth of neural networks to 16-19 weighted layers and convolution filter size of each layer was 3 × 3 for image recognition. Christian Szegedy et al. [30] provided a mechanism by using sparsely connected layer [2] instead of fully connected layers to increase the width and depth of the neural networks for image classification, named as Inception V1. Inception V1 effectively prevented to overfitting from enlarged size (width) of network and reduced the computing resource from increased depth of network. Previous researches show that the deep networks essentially use an end-to-end multilayer fashion to fuse different level fashion [17]

and classifiers and the extracted features can be more robust by increasing the number of depth in networks. Despite deep networks have obtained successfully applications for image processing

[27] , they can generate vanishing gradient or exploding gradient [4] with increased network depth. That makes network hamper convergence. This problem can be solved by normalized initialization [39]. However, when deeper neural networks get to converge, networks are saturated and degrade quickly with increasing depth of networks. The appearance of residual network effectively dealt with problems above for image recognition [15]. ResNeXt method is tested to be very effectively for image classification [40]. Spatial-temporal Attention (SPA) method is very competitive for visual tracking [50]

[49]. Furthermore, DiracNets [44], IndRNN [23] and varia-tional U-Net [11] also provide us with many competitive technologies for image pro-cessing. These deep networks are also widely applied in image denoising, which is the branch of image processing technologies. For example, the combination of kernel-prediction net and CNN is used to obtain denoised image [3]. BMCNN utilizes NSS and CNN to deal with image denoising [1]. GAN is used to remove noise from noisy image [33].

Nowadays, the most widely used model is trained with end-to-end in a supervised fashion, which is easy and simple to implement to train models. The popular network architecture is CNNs (ResNet). This network is widely used to deal with applications of image processing and obtain enormous success. The following sections will show the popular deep learning technology, discuss the merits and differences of the meth-od in Section 2.

Deep CNNs have result in a lot of breakthroughs for image recognition. Especially, deep network plays an important role on image classification [30]. Many other visual recognition applications are beneficial from deep networks. However, deeper network can have vanishing/exploding gradients [30]. This problem has been effectively solved by normalized initialization [33], which makes the network converge. When this network starts converging, performance of the network gets degraded. For exam-ple, the depth of this network are increased, the errors in the training model are in-creasing. The problem is effectively addressed by ResNet [15]. The ideas of ResNet are that outputs of each two layers and their inputs are added as the new input. ResNet include many blocks and the block is shown in Fig.1, where x and f

, respectively, denote input and activation function. A residual block is obtained by

f(x) + x . The ResNet is popular based on the following reasons. First, ResNet is deep rather than width, which effectively controls the number of parameters and overcomes the overfitting problem. Second, it uses less pooling layers and more downsampling operations to improve transmission efficiency. Third, it uses BN and average pooling for regularization, which accelerate the speed of training model. Finally, it uses 3 × 3 filters of each convolutional layer to train model, which is faster than using the combination of 3 × 3 and 1 × 1 filters. As a result, ResNest takes the first place in ILSVRC 2015 and reduces 3.57% error on the ImageNet test set.

In addition, deformation networks of Residual network are popular and have been widely used in image classification, image denoising [41] and image resolution [31].

The aim of image denoising is to obtain clean image x from a noisy image y which is explained by y=x+n. n

σ2 . From the machine learning knowledge, we know that the image prior is an important for image denoising. In the past ten years, a lot of methods are proposed for model with image priors, such as Markov random filed (MRF) method [19], BM3D [9], NCSR [10] and NSS [6]. Although these methods perform well for image denoising, they have two drawbacks. First, these methods need to optimize, which results in increasing computational cost. Second, these methods are non-convex, which need manual settings to improve performance. To address the problems, some discriminative learning schemes were proposed. A trainable nonlinear reaction diffusion method was proposed and used to learn image prior [26]. A cascade of shrinkage fields fuse the random field-based model and half-quadratic algorithm into a single architecture [46]. Despite methods improve the performances for image denoising, they are limited to the specified forms of prior. Another shortcoming is that these methods can t use a model to deal with blind image denoising.

[45] uses BN and ResNet to perform image denoising. This network not only deals with blind image denoising, but also addresses image super-resolution task and JPEG image deblocking. Its architecture is as shown in Fig. 2. Specifically, it obtains the residual image from the model and it needs to use y=x+n to obtain clean image when it is in the test phase. It obtained PSNR of 29.13, which is higher than the state-of-the-art BM3D method of 28.57 for BSD68 dataset with σ = 25.

FFDNet [46] uses noise level map and noisy image as input to deal with different noise levels. This method exploits a single model to deal with multiple noise levels. It is also faster than BM3D on GPU and CPU. As shown in Fig.3, performance of FFDNet outperforms the CBM3D [19] method in image denoising. IRCNN [47] fuses the model-based optimization method and CNN to address image denoising problem, which can deal with different inverse problems and multiple tasks with one single mode. In addition, it adds dilated convolution into network, which improves the per-formance for denoising. Its architecture is shown as Fig. 4.

4.1 The challenges of deep learning technologies in image denoising

According to existing researches, deep learning technologies achieve promising results in image denoising. However, these technologies also suffer from some challenges as follows. (1) Current deep learning denoising methods only deal with AWGN, which are not effective for real noisy images, such as low light images. (2) They can t use a model to deal with all the low level vision tasks, such as image denoising, image super-resolution, image blurring and image deblocking. (3) They can t use a model to address the blind Gaussian noise.

4.2 Some potential directions of deep learning technologies for image denoising

According to the previous researches, deep learning technologies have the follow-ing changes for image denoising application above. First, deep learning technologies design different network architectures to deal with tasks above. Second, they can fuse the optimization and discrimination methods. Third, they can use multiple tasks to design the network. Fourth, they can change the input of the neural networks.