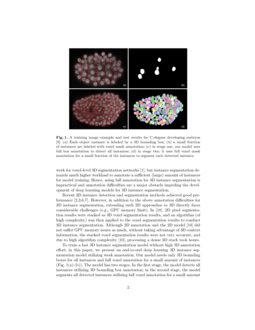 Deep-learning in the bioimaging wild: Handling ambiguous data with deepflash2

In this work we propose a novel and fully automated method for extractin...
Arturo Mendoza, et al. ∙

Calcium imaging is one of the most important tools in neurophysiology as...
Elke Kirschbaum, et al. ∙

3D instance segmentation seeks to segment all instances of the objects of interest (RoI) in 3D images. This is a fundamental task in computer vision and biomedical image analysis. Recent successes at acquiring 3D biomedical image data

[2] proposes an FCN based RPN to generate RoIs from convolutional feature maps directly, and then uses a classifier to classify the generated RoIs into different classes. Different from the previous FCN models for predicting the probability for each pixel, RPN predicts the probabilities for the anchor boxes centering at each feature point (of an instance) and the box regression offset. A multi-task loss for RPN is defined as:

where i is the index of an anchor box, pi is the predicted probability of anchor i, p∗i is a ground-truth label (0 for negative, 1 for positive), ti

t∗i presents the ground-truth box associated with a positive anchor, Lcls is the log loss over two classes (object and background) for the objectness error, and Lreg is the smooth L1 loss [2] on ti and t∗i for box position error. Lcls and Lreg are normalized by the number of the anchor boxes N.

Fig. 2 shows our FCN based backbone. We adopt the VoxRes block design to allow information propagating in both forward and backward directions directly.

A group of convolutional filters is used to predict the shape offset and score of containing an object for all anchor boxes. For a feature layer of size m×n×k with p channels, cr filters (c is the number of classes, r is the number of anchor boxes for each feature point) of size 3×3×3×p are used to predict the instance classes, and 6r filters of size 3×3×3×p are used to predict the box regression offset of all anchor boxes. Hence, the output size for the score of the instance class is m×n×k×cr, and the output size for the box regression offset is m×n×k×6r. The regression value (tz,tx, ty,td,th,tw) of the predicted 3D box and the value (t∗z,t∗x,t∗y,t∗d,t∗h,t∗w) of the ground-truth box are computed as:

where z, x, and y denote the box center coordinates, d, h, and w denote the box size, and z, za, and z∗ are for the predicted box, anchor box, and ground-truth box, respectively (likewise for x, y, d, w, and h). All anchor boxes are regressed to nearby ground-truth boxes to calculate the predicted boxes. Different from RPN that predicts region proposals (2 classes) and classifies all proposals in another stage, our model predicts the final classes for all objects (c classes). This change works well for biomedical images, while saving memory, because compared to natural scene images, there can be less classes but more instances in one stack (e.g., some types of cells). Thus, changing RPN to an object detector can help focus on locating instances and classifying instances into different classes in one step instead of two steps, which uses less parameters and less GPU memory. We use the same multi-task loss of RPN for our detected boxes, i.e., Lbox=Lcls+Lreg, but Lcls is for all c classes, not only two classes (objects and background). Since all instances have box annotation, the model conducts back-propagation for all boxes (Fig. 3), i.e., all boxes contribute to the object detector.

Mask-RCNN. Mask-RCNN [3] is used to perform 2D instance segmentation based on RPN. After generating RoIs using RPN, Mask-RCNN uses RoIAlign to align all RoIs to the same size (e.g., 7×7

3D voxel segmentation. After detecting the instances for all objects, a 3D voxel segmentation model utilizing full voxel annotation for a small fraction of the instances is used to segment all instances. The corresponding feature maps are cropped from the feature layers of the backbone. To make the detected objects of different sizes share the same segmentation parameters, we extend the RoIAlign design from 2D to a 3D version. All cropped features are aligned to size s×s×s×p, where s is the RoIAlign size and p is the channel number of the feature maps. For each sampling point, we first find the 8 nearest neighbor points on the feature maps, and then apply trilinear interpolation to the 8 neighbor points to calculate the value of the sampling point. Then up-convolutional layers are applied to all aligned features for segmenting all the detected instances. To make the model utilize the information from different layers, our 3D RoIAlign is applied to two different layers from the backbone, and the feature maps are concatenated as the final feature maps for 3D RoIAlign. (Fig. 2).

We evaluate our 3D instance segmentation model and our weak annotation method on three biomedical image datasets: nuclei of HL60 cells [8], microglia cells (in-house), and C.elegans developing embryos [8]. For nuclei of HL60 cells and C.elegans developing embryos, our objective is different from the original challenge; we only use the data with ground-truth labels as both the training data and test data. We evaluate both the instance detection and instance segmentation performance on the nuclei of HL60 cells and microglia cells. Due to lack of full voxel annotation for the C.elegans embryo dataset, we only evaluate the instance detection performance on this dataset. Based on our experiments, it takes about 15GB GPU memory during training when a batch contains 4 stacks of size 64×64×128 each. During testing, a stack of size 64×639×649 containing 20 instances takes about 10 seconds on an NVIDIA Tesla P100 GPU.

To evaluate our 3D voxel segmentation model utilizing full voxel annotation for a small fraction of the instances, for the HL60 cells images, we randomly choose 20% of the cells from each stack as the instances with full voxel masks, and 30% for microglia cells. All the instances have box annotation.

Table 1 and Table 2 show the results on these two datasets, in which the methods either use a proportion of the full voxel annotation (for our method, all instances have box annotation, and for the comparison method, full annotation is used) or use full annotation in the experiments.

C.elegans developing embryos. For this dataset, we do not have full voxel annotation but only small markers indicating different instances. The dataset is quite dense (e.g., see Fig. 1), and it is difficult (or impractical) to label all voxels of all instances. This dataset has two groups of data; each group contains 190 stacks with markers. To evaluate our detection method, experts labeled 1527 3D bounding boxes for 15 stacks from the first group, and only 67 instances are labeled with full voxel annotation. We use the 190 stacks in the second group for testing. A sample result is given in Fig. 1(c)-(d). We determine the performance of our instance detection by computing the distances between the ground-truth markers and the centers of the detected boxes. The F1 score for this experiment is 0.9495 (using a distance threshold of 5 pixels).