Here, we develop an audiovisual deep residual network for multimodal apparent personality trait recognition. The network is trained end-to-end for predicting the Big Five personality traits of people from their videos. That is, the network does not require any feature engineering or visual analysis such as face detection, face landmark alignment or facial expression recognition. Recently, the network won the third place in the ChaLearn First Impressions Challenge with a test accuracy of 0.9109. 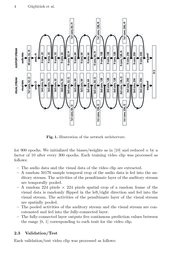 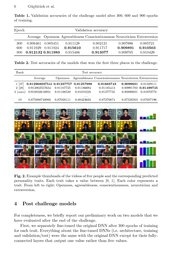 Appearances influence what people think about the personality of other people, even without having any interaction with them. These judgments can be made very quickly - already after 100 ms [35]. Although some studies have shown that people are good at forming accurate first impressions about the personality traits of people after viewing their photographs or videos [4, 21], it has also been shown that simply relying on the appearance does not always result in correct first impression judgments [22].

Several characteristics of people varying from clothing to facial expressions, contribute to the first impression judgments about personality [29]. For example, [30] has shown that the photographs of the same person taken with a different facial expression changes the judgments about the person’s personality traits such as trustworthiness and extravertedness as well as other perceived characteristics such as attractiveness and intelligence. Furthermore, people are better at guessing other’s personality traits if they find them attractive after short encounters with them [18]. The same study also showed that people form more positive first impressions about more attractive people.

Most of the previous work on apparent personality modeling and prediction have been in the domain of paralanguage, i.e. speech, text, prosody, other vocalizations and fillers [34]. Conversations (both text and audio) [19] and speech clips [23, 20] were the materials that were most commonly analyzed. In this domain, INTERSPEECH 2012 Speaker Trait Challenge [25] enabled a systematic comparison of computational methods by providing a dataset comprising audio data and extracted features. The competition had three sub-challenges for predicting the Big Five personality traits, likability and pathology of speakers, .

Recently, prediction of apparent personality traits from social media content has become a challenge that attracted much attention in the field. For example [6, 26] demonstrated that the images that the users ”favorite” on Flickr enabled the prediction of both apparent and actual (self-assessed) personality traits of Flickr users. [32] looked at the influence of a large number of physical attributes (e.g. chin length, head size, posture) on people’s impressions regarding approachability, youthful-attractiveness and dominance of them. They studied these influences based on people’s impressions formed after looking at face photographs. They performed factor analysis to quantify the contribution of physical attributes and used these factors as inputs to a linear neural network to predict impressions. Their predictions were significantly correlated to the actual impression data.

Given that the exact facial expression [30] and the posture [32] of the person in a photograph influences the first impression judgments about that person, as well as the importance of paralinguistic information in impression formation [19], continuous audio-visual data seems to be a suitable medium to study first impressions. In a series of studies using YouTube video blogs (vlogs) [1, 3, 2, 29], researchers showed that this is indeed the case. Furthermore, [5] showed that audiovisual annotations along with audiovisual cues enabled the best prediction performance for their regression models compared to either using only either one of them.

At the same time, deep neural networks [24, 16] in general and deep residual networks [11]

in particular have achieved state-of-the-art results in many computer vision tasks. For example,

(all layers), rectified linear units (all layers), max pooling (first layer) and global average pooling (last layer). In the residual blocks that do not change the dimensionality of their inputs, identity shortcut connections are used. In the remaining residual blocks, convolutional shortcut connections are used. In contrast to

[11], the number of convolutional kernels are halved.

where m is the number of channels.

and mini-batch size = 32 to train the network by iteratively minimizing the mean absolute error loss function between the target traits and the predicted traits for 900 epochs. We initialized the biases/weights as in

[10] and reduced α by a factor of 10 after every 300 epochs. Each training video clip was processed as follows:

Each validation/test video clip was processed as follows:

It should be noted that the network can process video clips of arbitrary sizes since the penultimate layers of the auditory stream and the visual stream are followed by global average pooling.

We evaluated the network on the dataset that was released as part of the ChaLearn First Impressions Challenge222http://gesture.chalearn.org. [17]. The dataset consists of 10000 15-second-long video clips that were drawn from YouTube333http://www.youtube.com/., of which 6000 were used for training, 2000 were used for validation and 2000 were used for test. The video clips were annotated with the Big Five personality traits (i.e. openness to experience, conscientiousness, extraversion, agreeableness, and neuroticism) by Amazon Mechanical Turk444http://www.mturk.com/. workers. Each trait was represented with a value between the range [0, 1].

The video clips were preprocessed by temporally resampling the audio data to 16000 Hz as well as spatiotemporally the video data to 456 pixels × 256 pixels and 25 frames per second.

For completeness, we briefly report our preliminary work on two models that we have evaluated after the end of the challenge.

First, we separately fine-tuned the original DNN after 300 epochs of training for each trait. Everything about the fine-tuned DNNs (i.e. architecture, training and validation/test) were the same with the original DNN except for their fully-connected layers that output one value rather than five values.

[12] and one layer of five linear units. At each time point, the RNN took as input the layer 5 features of a second-long video clip and the output of the RNN was the predicted traits. Dropout [27] was used to regularize the hidden layers.

In this study, we presented our approach and results that won the third place in the ChaLearn First Impressions Challenge. Summarizing, we developed and trained an audiovisual deep residual network for predicting the apparent personality traits of people in an end-to-end manner. This approach enabled us to obtain very high performance for all traits while exploiting the similarities between the organization of the personality traits and the deep neural networks in terms of the hierarchical organization and circumventing extensive analyses for identifying/designing relevant features for the task of apparent personality traits prediction. Our results demonstrate the potential of deep neural networks in the field of automatic (perceived) personality prediction. Future work will focus on the extensions of the current work with recurrent neural networks and language models as well as identifying the factors that drive first impressions.