Feature selection is central to contemporary high-dimensional data analysis. Grouping structure among features arises naturally in various scientific problems. Many methods have been proposed to incorporate the grouping structure information into feature selection. However, these methods are normally restricted to a linear regression setting. To relax the linear constraint, we combine the deep neural networks (DNNs) with the recent Knockoffs technique, which has been successful in an individual feature selection context. We propose Deep-gKnock (Deep group-feature selection using Knockoffs) as a methodology for model interpretation and dimension reduction. Deep-gKnock performs model-free group-feature selection by controlling group-wise False Discovery Rate (gFDR). Our method improves the interpretability and reproducibility of DNNs. Experimental results on both synthetic and real data demonstrate that our method achieves superior power and accurate gFDR control compared with state-of-the-art methods. 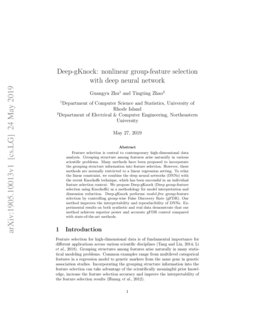 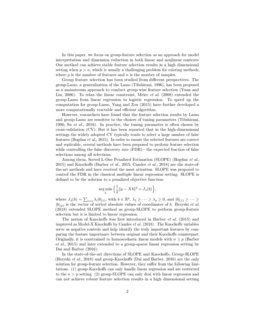 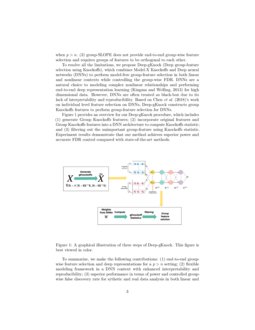 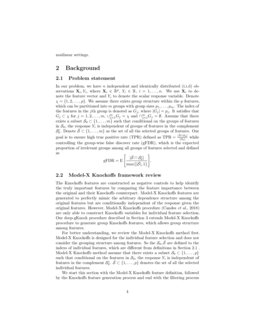 We study the phenomenon of bias amplification in classifiers, wherein a ...
Klas Leino, et al. ∙

High-dimensional feature selection is a central problem in a variety of ...
Swarnadip Ghosh, et al. ∙

The goal of controlled feature selection is to discover the features a r...
Derek Hansen, et al. ∙

In this paper, we focus on group-feature selection as an approach for model interpretation and dimension reduction in both linear and nonlinear contexts. Our method can achieve stable feature selection results in a high dimensional setting when p>n, which is usually a challenging problem for existing methods, where p is the number of features and n is the number of samples.

Group-feature selection has been studied from different perspectives. The group-Lasso, a generalization of the Lasso (Tibshirani, 1996), has been proposed as a mainstream approach to conduct group-wise feature selection (Yuan and Lin, 2006). To relax the linear constraint, Meier et al. (2008)

extended the group-Lasso from linear regression to logistic regression. To speed up the computation for group-Lasso,

Yang and Zou (2015) have further developed a more computationally tractable and efficient algorithm.

However, researchers have found that the feature selection results by Lasso and group-Lasso are sensitive to the choices of tuning parameters (Tibshirani, 1996; Su et al., 2016). In practice, the tuning parameter is often chosen by cross-validation (CV). But it has been reported that in the high-dimensional settings the widely adopted CV typically tends to select a large number of false features (Bogdan et al., 2015). In order to ensure the selected features are correct and replicable, several methods have been proposed to preform feature selection while controlling the false discovery rate (FDR)—the expected fraction of false selections among all selections.

(Bogdan et al., 2015) and Knockoffs (Barber et al., 2015; Candes et al., 2018) are the state-of-the-art methods and have received the most attention. SLOPE was proposed to control the FDR in the classical multiple linear regression setting. SLOPE is defined to be the solution to a penalized objective function:

is the vector of sorted absolute values of coordinates of

b. Brzyski et al. (2018) extended SLOPE method as group-SLOPE to perform group-feature selection but it is limited to linear regression.

The notion of Knockoffs was first introduced in Barber et al. (2015) and improved as model-X Knockoffs by Candes et al. (2018). The Knockoffs variables serve as negative controls and help identify the truly important features by comparing the feature importance between original and their Knockoffs counterpart. Originally, it is constrained to homoscedastic linear models with n≥p (Barber et al., 2015) and later extended to a group-sparse linear regression setting by Dai and Barber (2016).

In the state-of-the-art directions of SLOPE and Knockoffs, Group-SLOPE (Brzyski et al., 2018) and group-Knockoffs (Dai and Barber, 2016) are the only solution for group-feature selection. However, they suffer from the following limitations. (1) group-Knockoffs can only handle linear regression and are restricted to the n>p setting. (2) group-SLOPE can only deal with linear regression and can not achieve robust feature selection results in a high dimensional setting when p>n. (3) group-SLOPE does not provide end-to-end group-wise feature selection and requires groups of features to be orthogonal to each other.

To summarize, we make the following contributions: (1) end-to-end group-wise feature selection and deep representations for a p>n setting; (2) flexible modeling framework in a DNN context with enhanced interpretability and reproducibility; (3) superior performance in terms of power and controlled group-wise false discovery rate for sythetic and real data analysis in both linear and nonlinear settings.

In our problem, we have n independent and identically distributed (i.i.d) observations Xi,Yi, where Xi∈Rp, Yi∈R, i=1,…,n. We use Xi to denote the feature vector and Yi

Suppose the family of random features X=(X1,⋯,Xp)T. Model-X Knockoffs features for X are a new family of random features ˜X=(~X1,⋯,~Xp)T that satisfies two properties: (1) (X,˜X)swap(S)d=(X,˜X) for any subset S⊂{1,⋯,p}, where swap(S) means swapping Xj and ~Xj for each j∈S and d= denotes equal in distribution, and (2) ˜X⊥Y|X, i.e., ˜X is independent of response Y given feature X.

is positive definite. Following the above Knockoffs construction, the joint distribution of the original features and the model-X Knockoffs features is

To ensure high power in distinguishing X and ˜X, it is desired that the constructed Knockoffs features ˜X deviate from the original features X while maintaining the same correlation structure as X. This indicates larger components of s are preferred since Cov(X,˜X)=\boldmathΣ−diag{s}. In a setting where the features are normalized, i.e. \boldmathΣjj=1 for all j, we would like to have Cor(Xj,~Xk)=1−sj as close to zero as possible. One way to choose s is the equicorrelated construction (Barber and Candès, 2016), which uses

Then we define the Knockoffs statistic Wj for each feature Xj, j∈{1,…,p}, which is used in the filtering process to perform feature selection. A large positive value of Wj provides evidence that Xj is important. This statistic depends on X,˜X and Y, i.e. Wj=wj((X,˜X),Y) for some function wj. This function wj must satisfy the following flip-sign property:

Then the procedure selecting the features ^S={l:Wj≥τ}, controls the FDR at level q.

The original Knockoffs construction (Candes et al., 2018) does not take group structure among different features into account and requires stronger constraints. When there exists high correlation between features Xj and ~Xj, Candes et al. (2018)’s method requires that the values of s to be extremely small in order to ensure the covariance matrix in Equation (2) is positive semi-definite. However, smaller values of s will fail to detect the difference between X and ˜X, which will lead to a decrease in the power of detecting the true positive features. In a group-sparse setting, we relax this requirement by proposing our Group Knockoffs features in Definition 3 to increase the power.

We see from this definition, that the Group Knockoffs features ~Xj’s mimic the group-wise dependency structure among the original features Xj’s and are independent of the response Y given Xj’s. When X∼N(0,\boldmathΣ), the joint distribution obeying Definition 3 is

Once the Group Knockoffs features are constructed, following similar idea in DeepPINK (Lu et al., 2018), we feed them into a new DNN structure to obtain gKnock statistic. The structure of the network is shown in Figure 2.

. We use a linear activation function in this layer to encourage the competition between group-feature and its Knockoffs counterpart. Intuitively, if the group-feature

Finally, we define the gKnock statistic as

and the same filtering process as Theorem 2 is applied to the Wj’s to select group-feature.

We evaluate the performance of our method both in Gaussian linear regression model (6) and Single-Index model (7).

independently from a multivariate normal distribution with mean

We compare the performance of Deep-gKnock with group-SLOPE available in the R package grpSLOPE (Gossmann et al., 2016). For each setting, we run each experiment for 100 replications and set the target gFDR level q=0.2. The empirical gFDR and power are reported in Table 1 & 2.

In the single-index model setting shown in Table 2, Deep-gKnock achieves higher power and consistently controls gFDR in all settings, which demonstrates the advantages of our Deep-gKnock by using DNN to model the non-linear relationship between features and the response.

In addition to the simulation studies presented in Section 4, we also demonstrate the performance of Deep-gKnock on two real data sets. The gFDR level is set to q=0.2.

The prostate cancer data contains clinical measurements for 97 male patients who were about to receive a radical prostatectomy. It was analyzed in Hastie et al. (2013) to study the correlation between the response Y, the level of prostate-specific antigen (lpsa) and other eight features. The features are log cancer volume (lcavol), log prostate weight (lweight), age, log of the amount of benign prostatic hyperplasia (lbph), seminal vesicle invasion (svi), log of capsular penetration (lcp), Gleason score (gleason), and percent of Gleason scores 4 or 5 (pgg45).

For the categorical variable svi with two levels, we coded it by one dummy variable and treated it as one group. For each continuous variable, we used five B-Spline basis functions to represent its effect and treated those five basis functions as a group. This provides us eight groups with a total of 36 features. We summarize the group-feature selection results in Table

3. The features selected by Deep-gKnock are the same as using Lasso in Hastie et al. (2013).

We apply Deep-gKonck to the task of identifying the important transcription factors (TFs), which are related to regulation of the cell cycle. TFs belong to a class of proteins called binding proteins, and control the rate at which DNA is transcribed into mRNA. We utilize a yeast cell cycle data set from Spellman et al. (1998) and Lee et al. (2002). The response Y is the messenger ribonucleic acid (mRNA) levels on n=542 genes, and are measured at 28 minutes during a cell cycle. The features X is the measurements of binding information of p=106 TFs . Out of the 106 TFs, 21 TFs are known and experimentally confirmed cell cycle related TFs (Wang et al., 2007).

It has been studied that groups of TFs function in a coordinated fashion to direct cell division, growth and death (Latchman, 1997). Following Ma et al. (2007)

, we use the K-means method to cluster the 106 TFs, and determine the optimal number of clusters using the Gap statistic

. The Gap statistic suggests the 106 TFs can be clustered into 20 groups. To visulize the clustering results, we use Principal Component Analysis (PCA) algorithm to reduce the dimensionality to its first two principal components, which results in a scatter plot of data points colored by their cluster labels in Figure

3. One of the clusters contains four TFs and all of them are experimentally verified.

, we also compute the probability of containing at least

q confirmed TFs from a s

randomly chosen TFs from a hypergeometric distribution in Table

4. We included the results for the Lasso in Table 4 as a benchmark. Smaller probability values suggest better feature selection performance. The small probability of Deep-gKnock suggests that the large number of confirmed TFs selected is not due to chance. Deep-gKnock also outperforms group-SLOPE.