We extend Deep Deterministic Uncertainty (DDU), a method for uncertainty estimation using feature space densities, to semantic segmentation. DDU enables quantifying and disentangling epistemic and aleatoric uncertainty in a single forward pass through the model. We study the similarity of feature representations of pixels at different locations for the same class and conclude that it is feasible to apply DDU location independently, which leads to a significant reduction in memory consumption compared to pixel dependent DDU. Using the DeepLab-v3+ architecture on Pascal VOC 2012, we show that DDU improves upon MC Dropout and Deep Ensembles while being significantly faster to compute. 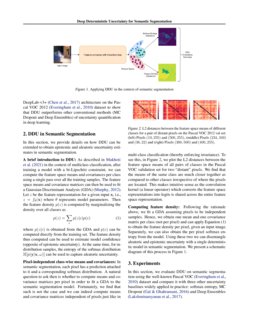 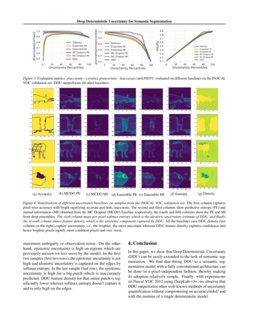 On the Practicality of Deterministic Epistemic Uncertainty

A Survey on Evidential Deep Learning For Single-Pass Uncertainty Estimation

(Huang & Chen, 2020) and medical diagnosis (Esteva et al., 2017), it is imperative for such models to be able to quantify their uncertainty reliably, in addition to making accurate predictions. A significant amount of research has been conducted in this direction and several methods have been introduced in the context of classification (Gal & Ghahramani, 2016; Lakshminarayanan et al., 2017; Blundell et al., 2015). These methods require several forward passes through the model rendering such methods practically infeasible for adoption in large scale applications like semantic segmentation (Long et al., 2015), where dense pixel-wise predictions are necessary, often in real time.

propose using feature extractors with certain inductive biases to impose a bi-Lipschitz constraint on the feature space. They then use a distance aware layer, either an RBF or a Gaussian Process trained end-to-end with the feature extractor. However, both these methods require extensive changes to the model architecture and training setup, with additional hyperparameters which need to be fine-tuned. DDU

(Mukhoti et al., 2021) shows that using feature space density with proper inductive biases can capture uncertainty and avoids the problem of feature collapse (Van Amersfoort et al., 2020). Due to feature collapse, Out-of-distribution (OoD) samples are often mapped to in-distribution regions in the feature space, making the model overconfident on such inputs. Hence, in order to capture uncertainty through feature space density, one needs to use proper inductive biases on the model architecture.

In this paper, we apply and extend DDU to the task of semantic segmentation (Long et al., 2015)

, where each pixel of a given input image is classified to produce an output which has the same spatial dimensions as the input. We choose semantic segmentation in particular as it forms an excellent example of an application with class imbalance and therefore, requires reliable epistemic uncertainty estimates. Furthermore, state-of-the-art models for semantic segmentation

The paper is organised as follows: in Section 2, we describe how DDU can be extended for semantic segmentation and in Section 3, we provide results using the well-known DeepLab-v3+ (Chen et al., 2017) architecture on the Pascal VOC 2012 (Everingham et al., 2010) dataset to show that DDU outperforms other conventional methods (MC Dropout and Deep Ensembles) of uncertainty quantification in deep learning.

In this section, we provide details on how DDU can be extended to obtain epistemic and aleatoric uncertainty estimates in semantic segmentation.

A brief introduction to DDU: As described in Mukhoti et al. (2021) in the context of multiclass classification, after training a model with a bi-Lipschitz constraint, we can compute the feature space means and covariances per class using a single pass over all the training samples. The feature space means and covariance matrices can then be used to fit a Gaussian Discriminant Analysis (GDA) (Murphy, 2012). Let z be the feature representation for a given input x, i.e., z=fθ(x) where θ represents model parameters. Then the feature density p(z) is computed by marginalizing the density over all classes as

Computing feature density: Following the rationale above, we fit a GDA assuming pixels to be independent samples. Hence, we obtain one mean and one covariance matrix per class (not per pixel) and can apply Equation 1 to obtain the feature density per pixel, given an input image. Separately, we can also obtain the per pixel softmax entropy from the model. Using these two we can disentangle aleatoric and epistemic uncertainty with a single deterministic model in semantic segmentation. We present a schematic diagram of this process in Figure 1.

backbone as the architecture of choice. We train each model for 50 epochs on the Pascal VOC training set augmented using the Semantic Boundaries Dataset (SBD)

(Hariharan et al., 2011) using SGD as the optimiser with a momentum of 0.9 and a weight decay of 5e−4. We set the initial learning rate to 0.007 with a polynomial decay during the course of training. Finally, we trained using a batch size of 32 parallelized over 4 GPUs.

Baselines & Uncertainty metrics: As mentioned before, we compare DDU with 3 well-known baselines:

Metrics for evaluation: In order to evaluate the quality of uncertainty in semantic segmentation, we use the metrics proposed in (Mukhoti & Gal, 2018): p(accurate—certain), p(uncertain—inaccurate) and PAVPU

Observations: Firstly we note from Table 1 that the runtime of DDU and a normal softmax model with values around 263 and 275 milliseconds respectively, are far lower than MC Dropout and Deep Ensembles. In fact, a single forward pass in MC Dropout requires around 1.57 seconds on an Nvidia Quadro RTX 6000 GPU. Although these baselines have not been tuned for runtime, real-time latency requirements of around 200ms (i.e., 5 predictions a second) make adoption of time-consuming methods infeasible in real-life applications. Furthermore, note that the val set mIoU for all the models are very similar.

Secondly, from Figure 3, we can see that DDU, having higher values on p(accurate—certain), p(uncertain—inaccurate) and PAVPU for most uncertainty thresholds, outperforms all other baselines on all these three metrics.

In this paper, we show that Deep Deterministic Uncertainty (DDU) can be easily extended to the task of semantic segmentation. We find that fitting DDU to a semantic segmentation model with a fully convolutional architecture can be done in a pixel-independent fashion, thereby making its adoption relatively simple. Finally, with experiments on Pascal VOC 2012 using DeepLab-v3+, we observe that DDU outperforms other well-known methods of uncertainty quantification without compromising on accuracy/mIoU and with the runtime of a single deterministic model.