Here, we present a novel approach to solve the problem of reconstructing perceived stimuli from brain responses by combining probabilistic inference with deep learning. Our approach first inverts the linear transformation from latent features to brain responses with maximum a posteriori estimation and then inverts the nonlinear transformation from perceived stimuli to latent features with adversarial training of convolutional neural networks. We test our approach with a functional magnetic resonance imaging experiment and show that it can generate state-of-the-art reconstructions of perceived faces from brain activations. 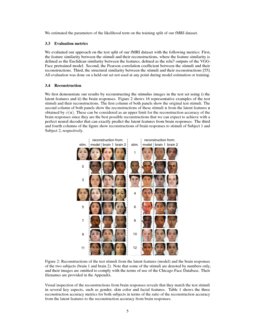 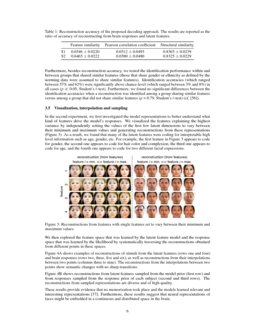 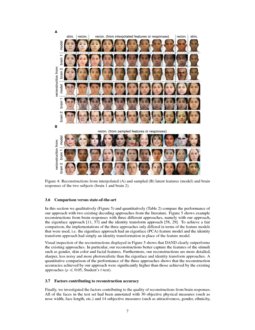 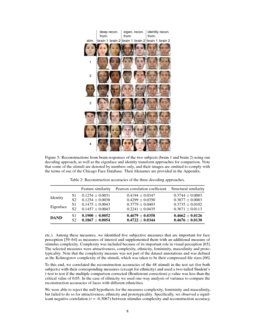 . Conversely, the goal of neural decoding is to classify

The recent integration of deep learning into neural encoding has been a very successful endeavor (Yamins2016, ; Kriegeskorte2015a, ). To date, the most accurate predictions of brain responses to perceived stimuli have been achieved with convolutional neural networks (Yamins2014, ; KhalighRazavi2014, ; Guclu2015Deep, ; Cichy2016, ; Guclu2016Brains, ; Guclu2017, ; Eickenberg2017, ), leading to novel insights about the functional organization of neural representations. At the same time, the use of deep learning as the basis for neural decoding has received less widespread attention. Deep neural networks have been used for classifying or identifying stimuli via the use of a deep encoding model (Guclu2015Deep, ; Guclu2017Increasingly, ) or by predicting intermediate stimulus features (Horikawa2015Generic, ; Horikawa2017Hierarchical, )

(Gerven2010, ; Du2017, ). To date, going beyond such mostly retinotopy-driven reconstructions and reconstructing complex naturalistic stimuli with high accuracy have proven to be difficult.

The integration of deep learning into neural decoding is an exciting approach for solving the reconstruction problem, which is defined as the inversion of the (non)linear transformation from perceived stimuli to brain responses to obtain a reconstruction of the original stimulus from patterns of brain activity alone. Reconstruction can be formulated as an inference problem, which can be solved by maximum a posteriori estimation. Multiple variants of this formulation have been proposed in the literature (Thirion2006, ; Naselaris2009, ; Guclu2013, ; Schoenmakers2013Linear, ; Schoenmakers2015, )

. At the same time, significant improvements are to be expected from deep neural decoding given the success of deep learning in solving image reconstruction problems in computer vision such as colorization

Here, we present a new approach by combining probabilistic inference with deep learning, which we refer to as deep adversarial neural decoding (DAND). Our approach first inverts the linear transformation from latent features to observed responses with maximum a posteriori estimation. Next, it inverts the nonlinear transformation from perceived stimuli to latent features with adversarial training and convolutional neural networks. An illustration of our model is provided in Figure 1. We show that our approach achieves state-of-the-art reconstructions of perceived faces from the human brain.

. Without loss of generality, we assume that all of the variables are normalized to have zero mean and unit variance.

We are interested in solving the problem of reconstructing perceived stimuli from brain responses:

Following the ideas presented in (Goodfellow2014Generative, ; Radford2015Unsupervised, ; Dosovitskiy2016Generating, ), we define the inverse of the feature model ϕ−1(z) (i.e., the image generator) as a convolutional neural network which transforms the 699-dimensional latent variables to 64×64×3 images and estimate its parameters via an adversarial process. The generator comprises five deconvolution layers: The ith layer has 210−i kernels with a size of 4×4

, batch normalization and rectified linear units. Exceptions are the first layer which has a stride of

1×1, and no padding; and the last layer which has three kernels, no batch normalization (Ioffe2015Batch, ) and hyperbolic tangent units. Note that we do use the inverse of the loadings in the generator.

is the output of the discriminator which gives the probability that its input is an original stimulus and not a reconstructed stimulus. The generator is trained by iteratively minimizing a generator loss function, which is a linear combination of an adversarial loss function, a feature loss function and a stimulus loss function:

We define the likelihood as a multivariate Gaussian distribution over

. We estimate the parameters with ordinary least squares, such that

We define the prior as a zero mean and unit variance multivariate Gaussian distribution Pr(z)=Nz(0,I).

To derive the posterior (2), we first reformulate the likelihood as a multivariate Gaussian distribution over z:

This allows us to write:

We used the following datasets in our experiments:

fMRI dataset. We collected a new fMRI dataset, which comprises face stimuli and associated blood-oxygen-level dependent (BOLD) responses. The stimuli used in the fMRI experiment were drawn from (Ma2015The, ; Strohminger2015The, ; Langner2010Presentation, ) and other online sources, and consisted of photographs of front-facing individuals with neutral expressions. We measured BOLD responses (TR = 1.4 s, voxel size = 2×2×2 mm3, whole-brain coverage) of two healthy adult subjects (S1: 28-year old female; S2: 39-year old male) as they were fixating on a target (0.6 × 0.6 degree) (Thaler2013What, ) superimposed on the stimuli (15 × 15 degrees). Each face was presented at 5 Hz for 1.4 s and followed by a middle gray background presented for 2.8 s. In total, 700 faces were presented twice for the training set, and 48 faces were repeated 13 times for the test set. The test set was balanced in terms of gender and ethnicity (based on the norming data provided in the original datasets). The experiment was approved by the local ethics committee (CMO Regio Arnhem-Nijmegen) and the subjects provided written informed consent in accordance with the Declaration of Helsinki. Our fMRI dataset will be shared online post publication.

Our implementation makes use of Chainer and Cupy with CUDA and cuDNN (Tokui2015Chainer, )

except for the following: The VGG-16 and VGG-Face pretrained models were ported to Chainer from Caffe

. We set the hyperparameters of the loss functions as follows:

We estimated the parameters of the likelihood term on the training split of our fMRI dataset.

These results provide evidence that no memorization took place and the models learned relevant and interesting representations (Radford2015Unsupervised, ). Furthermore, these results suggest that neural representations of faces might be embedded in a continuous and distributed space in the brain.

Finally, we investigated the factors contributing to the quality of reconstructions from brain responses. All of the faces in the test set had been annotated with 30 objective physical measures (such as nose width, face length, etc.) and 14 subjective measures (such as attractiveness, gender, ethnicity, etc.). Among these measures, we identified five subjective measures that are important for face perception (Hahn2014, ; Perrett1994, ; Birks2014, ; Strom2012, ; Little2013, ; Carrito2016, ) as measures of interest and supplemented them with an additional measure of stimulus complexity. Complexity was included because of its important role in visual perception (Gltrk2016, ). The selected measures were attractiveness, complexity, ethnicity, femininity, masculinity and prototypicality. Note that the complexity measure was not part of the dataset annotations and was defined as the Kolmogorov complexity of the stimuli, which was taken to be their compressed file sizes (Donderi2005, ).

To this end, we correlated the reconstruction accuracies of the 48 stimuli in the test set (for both subjects) with their corresponding measures (except for ethnicity) and used a two-tailed Student’s t-test to test if the multiple comparison corrected (Bonferroni correction) p-value was less than the critical value of 0.05. In the case of ethnicity we used one-way analysis of variance to compare the reconstruction accuracies of faces with different ethnicities.

We were able to reject the null hypothesis for the measures complexity, femininity and masculinity, but failed to do so for attractiveness, ethnicity and prototypicality. Specifically, we observed a significant negative correlation (

In this study we combined probabilistic inference with deep learning to derive a novel deep neural decoding approach. We tested our approach by reconstructing face stimuli from BOLD responses at an unprecedented level of accuracy and detail, matching the target stimuli in several key aspects such as gender, skin color and facial features as well as identifying perceptual factors contributing to the reconstruction accuracy. Deep decoding approaches such as the one developed here are expected to play an important role in the development of new neuroprosthetic devices that operate by reading subjective information from the human brain.

This work has been partially supported by a VIDI grant (639.072.513) from the Netherlands Organization for Scientific Research and a GPU grant (GeForce Titan X) from the Nvidia Corporation.