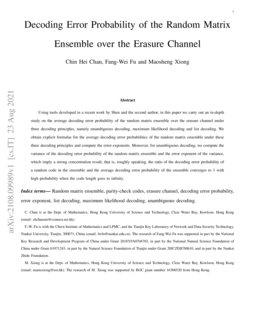 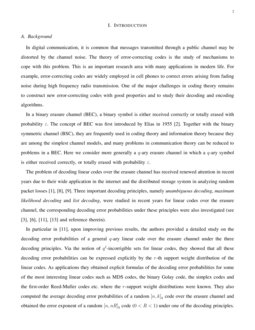 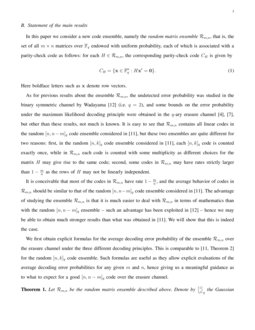 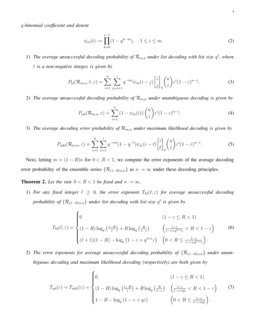 On Error Decoding of Locally Repairable and Partial MDS Codes

On the Bee-Identification Error Exponent with Absentee Bees

In this paper upper bounds on the probability of decoding failure under ...
Francisco Lázaro, et al. ∙

A Distance Between Channels: the average error of mismatched channels

In digital communication, it is common that messages transmitted through a public channel may be distorted by the channel noise. The theory of error-correcting codes is the study of mechanisms to cope with this problem. This is an important research area with many applications in modern life. For example, error-correcting codes are widely employed in cell phones to correct errors arising from fading noise during high frequency radio transmission. One of the major challenges in coding theory remains to construct new error-correcting codes with good properties and to study their decoding and encoding algorithms.

The problem of decoding linear codes over the erasure channel has received renewed attention in recent years due to their wide application in the internet and the distributed storage system in analyzing random packet losses [1, 8, 9]. Three important decoding principles, namely unambiguous decoding, maximum likelihood decoding and list decoding, were studied in recent years for linear codes over the erasure channel, the corresponding decoding error probabilities under these principles were also investigated (see [3, 6, 11, 13] and reference therein).

I-B Statement of the main results

In this paper we consider a new code ensemble, namely the random matrix ensemble Rm,n, that is, the set of all m×n matrices over Fq endowed with uniform probability, each of which is associated with a parity-check code as follows: for each H∈Rm,n, the corresponding parity-check code CH is given by

Here boldface letters such as x

As for previous results about the ensemble Rm,n, the undetected error probability was studied in the binary symmetric channel by Wadayama [12] (i.e. q=2), and some bounds on the error probability under the maximum likelihood decoding principle were obtained in the q-ary erasure channel [4, 7], but other than these results, not much is known. It is easy to see that Rm,n contains all linear codes in the random [n,n−m]q code ensemble considered in [11], but these two ensembles are quite different for two reasons: first, in the random [n,k]q code ensemble considered in [11], each [n,k]q code is counted exactly once, while in Rm,n each code is counted with some multiplicity as different choices for the matrix H may give rise to the same code; second, some codes in Rm,n may have rates strictly larger than 1−mn as the rows of H may not be linearly independent.

It is conceivable that most of the codes in Rm,n have rate 1−mn, and the average behavior of codes in Rm,n should be similar to that of the random [n,n−m]q code ensemble considered in [11]. The advantage of studying the ensemble Rm,n is that it is much easier to deal with Rm,n in terms of mathematics than with the random [n,n−m]q ensemble – such an advantage has been exploited in [12] – hence we may be able to obtain much stronger results than what was obtained in [11]. We will show that this is indeed the case.

We first obtain explicit formulas for the average decoding error probability of the ensemble Rm,n over the erasure channel under the three different decoding principles. This is comparable to [11, Theorem 2] for the random [n,k]q code ensemble. Such formulas are useful as they allow explicit evaluations of the average decoding error probabilities for any given m and n, hence giving us a meaningful guidance as to what to expect for a good [n,n−m]q code over the erasure channel.

Let Rm,n be the random matrix ensemble described above. Denote by [ij]q the Gaussian q-binomial coefficient and denote

Next, letting m=(1−R)n for 0<R<1, we compute the error exponents of the average decoding error probability of the ensemble series {R(1−R)n,n} as n→∞ under these decoding principles.

It can be checked that the error exponent here under unambiguous decoding principle coincides with that for the random [n,nR]q code ensemble obtained in [11, Theorem 3].

Next, we establish a strong concentration result for the unsuccessful decoding probability of a random code in the ensemble R(1−R)n,n towards the mean under unambiguous decoding.

under either of the following conditions:

so (8) shows that Pud(Hn,ε) also tends to zero exponentially fast with high probability for the ensemble R(1−R)n,n under either Condition (1) or (2) of Theorem 3.

Finally, we point out a weaker but more general concentration result:

It is interesting to make a comparison of Theorem 2 with what can be obtained by Gallager’s method for nonlinear code ensembles over the erasure channel (see [5, Exercise 5.20, page 538]): consider the ensemble of all block codes of length n and rate R (0<R<1) over the erasure channel in which each letter of each codeword is selected independently as an element of Fq with equal probability 1/q, then the average decoding error probability under list-decoding with list size L is upper bounded by

where the function T(∗)ld(L,ε) is given as

We compare the error exponent Tld(ℓ,ε) given in Theorem 2 corresponding to list decoding with list size qℓ for the random matrix ensemble R(1−R)n,n with T(∗)ld(L,ε) above where L=qℓ which corresponds to list decoding with list size L for the random code ensemble of the same rate 0<R<1 described by Gallager. We can observe that in the high rate region 1−ε1−ε+qℓ+1ε≤R<1−ε, the two exponents Tld(ℓ,ε) and T(∗)ld(L,ε) coincide with each other, but in the low rate region 0<R<1−ε1−ε+qℓ+1ε, we have T(∗)ld(L,ε)>Tld(ℓ,ε)>0 whenever qℓ>2. As illustrations we plot the two exponents as functions of R in Figs. 2 and 3 for ε=0.25, q=2, L=qℓ with ℓ=2 and 3. This shows that under the list decoding principle over the erasure channel, the performance of linear codes on average is as good as that of nonlinear codes in the high rate range, but is inferior in the low rate range if the list size qℓ is at least 3. It is well-known that they have the same performance when ℓ=0, that is, under the unambiguous decoding and the maximum likelihood decoding principles [5].

The paper is now organized as follows. In Section II, we introduce the Gaussian q-binomial coefficient in more details. Then in Section III, we provide three counting results regarding m×n matrices of certain rank over Fq. Afterwards in Sections IV, V and VI, we give the proofs of Theorems 1, 2 and 3-4 respectively. The proofs of Theorems 3 and 4 involves some technical calculus computations on the error exponent of the variance. In order to streamline their proofs, we put some of the arguments in Section VII Appendix. Finally we conclude this paper in Section VIII.

For integers n≥k≥0, the Gaussian binomial coefficients [nk]q is defined as

In this section we provide three counting results about matrices of certain rank in the ensemble Rm,n. Such results may not be new, but since we cannot locate them in the literature, we prove them here. These results will be used repeatedly in the proofs later on.

For H∈Rm,n, denote by rk(H) the rank of the matrix H over Fq.

Let H be a random matrix in the ensemble Rm,n. Then for any integer j, we have

We may assume that j satisfies 0≤j≤n, because if j is not in the range, then both sides of Equation (12) are obviously zero.

Denote by Hom(m,n) the set of Fq

Fmq to Fnq. Writing vectors in Fmq and Fnq as row vectors, we see that the random matrix ensemble Rm,n can be identified with the set Hom(m,n) via the relation

The inner sum ∑G∈Hom(m,n),ImG=V1 counts the number of surjective linear transformations from Fmq to V, a j-dimensional subspace of Fnq. Since V≅Fjq, this is also the number of surjective linear transformations from Fmq to Fjq, or, equivalently, the number of m×j matrices K over Fq such that the columns of K are linearly independent. The number of such matrices K can be counted as follows: the first column of K can be any nonzero vector over Fq, there are qm−1 choices; given the first column, the second column can be any vector lying outside the space of scalar multiples of the first column, so there are qm−q choices; inductively, given the first k columns, the (k+1)-th column lies outside a k-dimensional subspace, so the number of choices for the (k+1)-th column is qm−qk. Thus we have

Together with Lemma 1, we obtain

which is the desired result. ∎

Let H be a random matrix in the ensemble Rm,n. Let A⊂[n]:={1,2,⋯,n} be a subset with cardinality s. Denote by HA the m×s submatrix formed by columns of H indexed from A. Then for any integers j and r, we have

Here VA is the subspace of FAq formed by restricting V to coordinates with indices from A. We may consider the projection given by

The kernel of πA has dimension j−r and is of the form W×{(0)A} for some subspace W≤F[n]−Aq. So we can further decompose the sum on the right hand side of (16) as

On the other hand, given a fixed j-dimensional subspace V with ker(πA)=W×{(0)A}, we count the number of ordered bases of V of the form stated in previous paragraph as follows: we choose v1 to be any vector in V but not in W×{(0)A}, which gives qj−qj−r many choices for v1; similarly v2 is any vector in V but not in the span of W×{(0)A} and v1, this gives us qj−qj−r+1 many choices for v2; using this argument, we see that the number of such ordered bases is given by ∏r−1k=0(qj−qj−r+k).

We conclude from the above arguments that

Putting this into the right hand side of (17) and using Lemma 1 again, we get

The desired result is obtained immediately by plugging this into the right hand side of (16). This completes the proof of Lemma 3. ∎

Let H be a random matrix in the ensemble Rm,n. Let E,E′ be subsets of [n] such that

It is clear that if a matrix H has full rank, then so is the submatrix HA for any index subset A. Hence we have

It is easy to see that the two events rk(HE)=i and rk(HE′)=i′ are conditionally independent given rk(HE∩E′)=s, since columns of HE and HE′ are independent as random vectors over Fq. Hence we get

The background of the three decoding principles unambiguous decoding, maximum likelihood decoding and list decoding of linear codes over the erasure channel, the computation of their decoding error probability functions Pld(C,ℓ,ε),Pmld(C,ε) and Pud(C,ε), and their relation to the concept of qℓ-incorrigible set of a linear code C were all laid out perfectly in [11, II. Preliminaries], so we do not repeat here. Interested readers may refer to that paper for more details. We focus on what are most relevant to the proof of Theorem 1 in this paper.

Since C is a linear code, C(E) is also a vector space over Fq.

We also have the identity

For H∈Rm,n, we write Pld(H,ℓ,ε):=Pld(CH,ℓ,ε) and P∗(H,ε):=P∗(CH,ε) for ∗∈{ud,mld}, where CH is the parity-check code defined by (1). The average decoding error probabilities over the matrix ensemble Rm,n are given by

Here the expectation E is taken over the ensemble Rm,n.

Now we can start the proof of Theorem 1. For H∈Rm,n, we denote

Taking expectations on both sides of Equations (22)-(24), we obtain

By the symmetry of the ensemble Rm,n, the inner sum on the right hand side depends only on the cardinality of E, so we may assume E=[i] to obtain

The right hand side is exactly (ni)P(rk(H)=i−ℓ) where the probability is over the ensemble Rm,i. So from Lemma 2 we have