Deep neural networks have been used in various fields, but their internal behavior is not well known. In this study, we discuss two counterintuitive behaviors of convolutional neural networks (CNNs). First, we evaluated the size of the receptive field. Previous studies have attempted to increase or control the size of the receptive field. However, we observed that the size of the receptive field does not describe the classification accuracy. The size of the receptive field would be inappropriate for representing superiority in performance because it reflects only depth or kernel size and does not reflect other factors such as width or cardinality. Second, using the effective receptive field, we examined the pixels contributing to the output. Intuitively, each pixel is expected to equally contribute to the final output. However, we found that there exist pixels in a partially dead state with little contribution to the output. We reveal that the reason for this lies in the architecture of CNN and discuss solutions to reduce the phenomenon. Interestingly, for general classification tasks, the existence of dead pixels improves the training of CNNs. However, in a task that captures small perturbation, dead pixels degrade the performance. Therefore, the existence of these dead pixels should be understood and considered in practical applications of CNN. 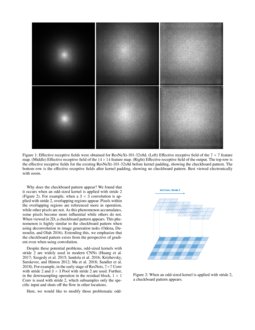 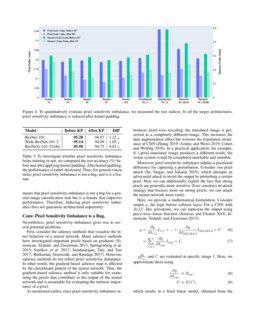 In addition to examining the size of the effective receptive field, we investigate the shape of the effective receptive field. We further obtained the effective receptive field of the final output. Conventionally, for a CNN, every pixel, or at least an adjacent pixel, is expected to contribute almost equally to the final output. In other words, it would be strange if a pixel at a specific location is partially dead, and the dead pixel has little effect on the output for any data. Surprisingly, we found that the partially dead pixels exist. In modern CNNs such as ResNet, strong pixels and weak pixels exist for any data. Here, the contribution to the output is significantly different for strong pixels and weak pixels. We will show that this pixel sensitivity imbalance is significant even for adjacent pixels. This pixel sensitivity imbalance occurs when an operation with an odd-sized kernel is applied with stride 2. A solution to this problem is provided in Section

Here we provide a detailed formulation of our trick to obtain the effective receptive field. Suppose an image Ixyz∈R224×224×3 is given. The image is passed through given CNN, resulting in a target feature map Aijk∈R7×7×Nc. For effective receptive field, the goal is to represent the spatial relationship between pixel-level (x,y) and feature-level (i,j). Therefore, the channel of the image and feature map should be ignored and averaged. First, we define,

which is the averaged feature over channel k for the spatial center (4,4) in the target feature map. Then we compute the gradient w.r.t image, ∂F∂Ixyz. By averaging the gradient over the channel z, we obtain,

which represents how pixel (x,y) affects the central feature for the given image. However, the Gxy from a single image is sparse and depends on the image. By averaging Gxy over a sufficiently large number of data, the nature of the neural network can be obtained.

However, if some Gxy has a negative value, it cancels out with a positive Gxy. As we want to obtain the accumulation of pixel contributions, we ignore negative importance Selvaraju et al. (2017); Chattopadhay et al. (2018). Thus, we pass Gxy through the ReLU Glorot et al. (2011):

Now, Rxy represents the general contribution property of pixel (x,y) to the target feature, i.e., the effective receptive field. In summary, we need first to calculate Gxy for each image, pass it through ReLU

, and then average it over a sufficiently large dataset. In the modern deep learning environment using mini-batch, applying

ReLU to the gradient for each image can be difficult. We recommend using batch size 1 to correctly accumulate ReLU(Gxy) for each image. Accumulating ReLU(Gxy) over a sufficiently large amount of data yields a clean, high-quality effective receptive field Rxy that well describes the internal behavior of a neural network.

Here, we investigate the size of the effective receptive field of modern CNNs. Target CNNs are ResNet and its variants He et al. (2016); Zagoruyko and Komodakis (2016); Xie et al. (2017), which are widely used in various vision tasks. We used torchvision.models Paszke et al. (2019, 2017)

that were pre-trained on ImageNet

Russakovsky et al. (2015). For each model, we summarized the top-1 accuracy and top-5 accuracy reported. We also computed the size of the theoretical receptive field for each model. Note that since ResNet differs in detailed architecture for each implementation, the sizes of the theoretical receptive field for torchvision.models are different from that of the TensorFlow models Araujo et al. (2019); Silberman and Guadarrama (2016).

For each pre-trained model, we obtained an effective receptive field using the test dataset from the CUB-200-2011 dataset

Observation 1. The size of the theoretical receptive field does not describe the classification accuracy.

Observation 2. The size of the effective receptive field does not describe the classification accuracy.

The same experiment was performed once more. First, each pre-trained ResNet was fine-tuned on the Caltech-101 dataset Fei-Fei et al. (2004)

. We replaced the last fully connected layer to output for 101 classes. For training, stochastic gradient descent with momentum 0.9

Loshchilov and Hutter (2016) was used. For data augmentation, random resized crop with size 256, random rotation with degree 15, color jitter, random horizontal flip, center crop with size 224, and mean-std normalization was applied. The train/val/test set was split at a ratio of 70:15:15. Within 200 epochs, the model with the best validation accuracy was obtained and evaluated.

The existence of this checkboard pattern implies that modern CNNs recognize images in a highly counterintuitive way. Some pixels are weak, partially dead, and hardly contribute to the output. Conversely, some pixels are strong and more sensitive to output. We call this phenomenon pixel sensitivity imbalance. As the checkboard pattern appears locally, even in adjacent pixels, the pixel sensitivity differs significantly.

We applied kernel padding to the ResNets pre-trained on the ImageNet and then fine-tuned them on the Caltech-101 dataset. The training details used in fine-tuning are the same as the experiments in Section

3. Now the effective receptive field of our architecture has no checkboard pattern (Figure 1).

Even with pixel sensitivity imbalance, ResNets have been widely used in various vision tasks so far. Although some pixels are partially dead, they are not entirely dead. The difference between strong and weak pixels is a matter of contribution degree, and they are all involved in the output.

The phenomenon of blocking the flow of certain inputs is not so unfamiliar. For example, consider Dropout Srivastava et al. (2014) or DropBlock Ghiasi et al. (2018)

. They improve the performance of neural networks by dropping some neurons or inputs. For understanding the global context of an image, it is fine if some trivial input is missing. Furthermore, dropping some input induces the CNN to understand the image in a different way, introducing a regularization effect.

Here, we examined how pixel sensitivity imbalances affect the performance in a general vision task. As kernel padding reduces pixel sensitivity imbalance, we compared the performance of ResNet and its variants before and after applying kernel padding. We performed fine-tuning on the Caltech-101 dataset, and the experimental details such as the training method and data augmentation are the same as in Section 3.

For each model, we measured the average test accuracy from three experiments (Table 3). We observed that the performance is rather decreased after kernel padding. This means that pixel sensitivity imbalance is not a bug for a general image classification task but is a feature that improves performance. Therefore, reducing pixel sensitivity imbalance does not guarantee architectural superiority.

As mentioned earlier, since pixel sensitivity imbalance introduces pixel-wise rescaling, the translated image is perceived as a completely different image. This increases the data augmentation effect but worsens the translation invariance of CNN Zhang (2019); Azulay and Weiss (2019); Cohen and Welling (2016). In a practical application, for example, if 1-pixel translated image produces a different result, the vision system would be considered unreliable and unstable.

Moreover, pixel sensitivity imbalance implies a positional difference for capturing a perturbation. Consider one-pixel attack Su et al. (2019), which attempts an adversarial attack to invert the output by perturbing a certain pixel. Here we can additionally exploit the fact that strong pixels are generally more sensitive. If we construct an attack strategy that focuses more on strong pixels, we can attack the neural network more easily.

, the logit before softmax layer. For a CNN with

∂y∂Ixyz and C are evaluated at specific image I. Here, we approximate them using

which results in a fixed linear model, obtained from the mean over images. We define ~y(I),

which is the output from the fixed linear model.

Now, assume that we put a perturbation ϵ on IXYZ. Then,

If pixel sensitivity imbalance exists, RXY differs depending on the (X,Y). Thus, even if the same amount of ϵ is applied, Δ~y varies depending on where the perturbation is applied. For example, if we put perturbation to a strong pixel, the output can be significantly affected.

Here, we propose a micro-object classification task. The templates are images from the Caltech-101 dataset. First, we select a random 8×8 region within the template. After changing the color of the selected area to RGB=(0, 0, 0), we label the image as class A. In the same way, for class B, select a random area, but replace it with RGB=(255, 0, 0). As such, we put a micro-object at a random location in the image to perform a binary classification task. In this task, not only the position of the perturbation but also the magnitude changes every time. Here, when pixel sensitivity imbalance exists, it may be difficult for CNN to capture the difference in perturbation magnitude between the two classes. In contrast, suppose the pixel sensitivity imbalance is reduced by kernel padding. In that case, as the influence of the random position decreases, the change in the magnitude of perturbation can be more easily captured.

Experimental details such as training method and data augmentation are almost the same as in Section 3. Here, to better see the intrinsic architectural differences, we did not use pre-trained weights. The number of epochs was set to 50. The observed training curve is shown in Figure 5. Initially, the test accuracy was around 50%, and the difference in perturbation was not captured. After a certain epoch, the test accuracy increased rapidly, and the difference in the micro-objects was captured with an accuracy of more than 99%. Here, the existing model without kernel padding required more epochs to capture the perturbation difference. In contrast, the model to which kernel padding is applied captured the perturbation difference faster.

To verify this more strictly, we measured the number of epoch where the test accuracy first exceeded 90%. If it did not exceed 90% within 50 epochs, it was evaluated as 50 epochs. For ResNet-101 and its variant, five experiments were performed, and the average of the measured number of epochs was summarized (Table 4). Even in the same training environment, after kernel padding, the difference in the micro-objects was captured 13-18 epochs faster. Thus, for some special tasks, pixel sensitivity imbalance is harmful to training.