Deep diffeomorphic registration faces significant challenges for high-dimensional images, especially in terms of memory limits. Existing approaches either downsample original images, or approximate underlying transformations, or reduce model size. The information loss during the approximation or insufficient model capacity is a hindrance to the registration accuracy for high-dimensional images, e.g., 3D medical volumes. In this paper, we propose a Dividing and Downsampling mixed Registration network (DDR-Net), a general architecture that preserves most of the image information at multiple scales. DDR-Net leverages the global context via downsampling the input and utilizes the local details from divided chunks of the input images. This design reduces the network input size and its memory cost; meanwhile, by fusing global and local information, DDR-Net obtains both coarse-level and fine-level alignments in the final deformation fields. We evaluate DDR-Net on three public datasets, i.e., OASIS, IBSR18, and 3DIRCADB-01, and the experimental results demonstrate our approach outperforms existing approaches. 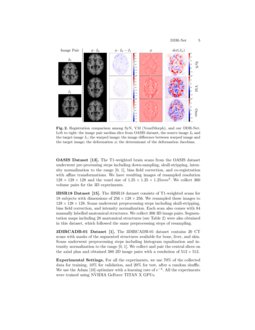 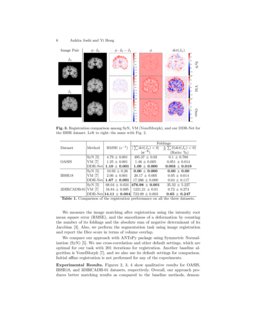 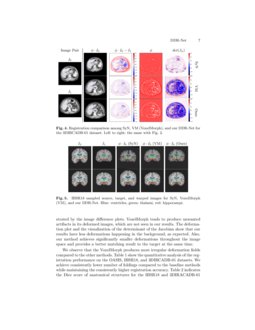 Deformable image registration establishes pixel- or voxel-level dense correspondences for 2D or 3D image pairs, which form a deformation that transforms images into a common space for comparison and analysis. Such a deformation desires a good property of diffeomorphism, a smooth transformation with a smooth inverse, to ensure the preservation of topology when warping images. Classical image registration models, e.g., LDDMM [beg2005computing], Stationary Velocity Fields (SVF) [arsigny2006log]

, successfully estimate diffeomorphic deformations for building dense correspondences between image pairs. However, these models face challenges for practical applications, i.e., providing both fast and accurate solutions. Therefore, researchers have been working on improving the efficiency of diffeomorphic image registration methods

Recently, deep learning based approaches open an alternative to address the above challenges, which motivates our work in this paper. Existing deep registration models focus on tackling the efficiency challenge using supervised

. Due to the flexibility in selecting the network architecture and the loss function, the unsupervised framework has the potential to further improve the registration accuracy. However, because the integration step is computationally expensive and the network faces the memory challenge for high-dimensional images, the unsupervised approaches often work on downsampled images or deformations, which does not fully leverage available information and limits the registration accuracy.

In this paper, we aim to improve the accuracy of unsupervised image registration, using a multi-scale design to integrate image deformations at global, local, and original scales. The difference in our work from current unsupervised registration models [dalca2018unsupervised, krebs2018unsupervised] is that our model works on downsampled images and chopped chunks, which reduce the computational and memory cost compared to working on the original image size directly. Meanwhile, the integration of these two-scale deformations back to the original scale improves the registration accuracy because of the information fusion at different levels. Previous work [hering2019mlvirnet, krebs2019learning, yang2017quicksilver] either use multi-scale approaches of downsampling the entire image to improve accuracy of the result or use only patches of the images to reduce the memory cost, but both these techniques do not adequately leverage the data. Therefore, to gain an accuracy boost but not run into memory issues, we propose the Dividing and Downsampling mixed Registration Network (DDR-Net).

Our contributions in this paper are summarized as follows:

Architecture Overview. As shown in Figure 1, our proposed DDR-Net includes three main components: a global branch that handles the registration for downsampled images, a local branch that handles the registration for the cropped local chunks of original images, and an original branch that merges estimated velocity fields from the global and local branches to register original images. Each branch outputs a deformation field ϕ to register image pairs at its corresponding level, and they share some network designs as discussed below.

Backbone Registration. At each scale, we have a diffeomorphic image registration problem. Given an image pair, a source image I0 and a target image I1, each of size nx×ny×nz, the goal of diffeormorphic image registration is to estimate a smooth deformation field ϕ:Rnx×ny×nz→Rnx×ny×nz with a smooth ϕ−1, such that the image deformed from the source, i.e. ϕ⋅I0, is similar to the target image I1. Such a diffeomorphic deformation field is driven by a smooth velocity field vt,t∈[0,1], via the following differential equation:

Here, id is an identity deformation. This formulation estimates an optimal velocity field v that drives a deformation field ϕ to match an image pair. So, the registration network has three sub-tasks, i.e., estimating the velocity field, solving Eq. (1) for deformations, and deforming an image with interpolation.

Velocity Field Estimation. The global and local branches follow the same UNet [ronneberger2015u] architecture as shown in Fig. 1. The UNet takes in image pairs and outputs the mean μ and the variance Σ for sampling a corresponding stationary velocity field v. Here, the stationary velocity field assumption simplifies the solution of Eq. (1). Given a collection of image pairs {(I0,I1)}, where I0,I1∈Rnx×ny×nz, the downsampling branch takes the low-resolution image pairs {(I0D,I1D)}, downsampled by half, i.e., I0D,I1D∈Rnx2×ny2×nz2. The chunk branch receives each input as k divided patches with the same resolution as I0D and I1D, i.e., k×{(I0C,I1C)} and I0C,I1C∈Rnx2×ny2×nz2. These cropped chunks have small overlaps on their boundaries to mitigate the discontinuity of the generated velocity fields at the chunk boundaries, when merging back to form the original high resolution velocity fields. The detailed network architecture in terms of the number of convolution layers and the kernel sizes are shown in Fig. 1.

Image Interpolation. We use an interpolation layer to deform the source image at each branch. For each voxel p in the target image, we compute its location ϕ(p)

in the source image and compute its intensity value using linear interpolation. This differentiable operation allows the backpropagation of the network errors.

Loss Functions. All the velocity fields generated in the network have the constraint to ensure the smoothness of the deformations. Each branch also outputs a deformed source image to match the corresponding target image at each level, i.e., the downsampled, chunk, and original scales. We use the Mean Square Error (MSE) to measure the matching results and a K-L divergence loss to encourage the smoothness of the velocity field as done in [dalca2018unsupervised, krebs2019learning].

OASIS Dataset [marcus2007open]. The T1-weighted brain scans from the OASIS dataset underwent pre-processing steps including down-sampling, skull-stripping, intensity normalization to the range [0, 1], bias field correction, and co-registration with affine transformations. We have resulting images of resampled resolution 128×128×128 and the voxel size of 1.25×1.25×1.25mm3. We collect 360 volume pairs for the 3D experiments.

3DIRCADB-01 Dataset [3dircadb]. The 3DIRCADB-01 dataset contains 20 CT scans with masks of the segmented structures available for bone, liver, and skin. Scans underwent preprocessing steps including histogram equalization and intensity normalization to the range [0, 1]. We collect and pair the central slices on the axial plan and obtained 380 2D image pairs with a resolution of 512×512.

Experimental Settings. For all the experiments, we use 70% of the collected data for training, 10% for validation, and 20% for test, after a random shuffle. We use the Adam [kingma2014adam] optimizer with a learning rate of e−4. All the experiments were trained using NVIDIA GeForce TITAN X GPUs.

We measure the image matching after registration using the intensity root mean square error (RMSE), and the smoothness of a deformation by counting the number of its foldings and the absolute sum of negative determinant of its Jacobian [ashburner2007fast]. Also, we perform the segmentation task using image registration and report the Dice score in terms of volume overlap.

We compare our approach with ANTsPy package using Symmetric Normalization (SyN) [avants2011reproducible]. We use cross-correlation and other default settings, which are optimal for our task with 201 iterations for registration. Another baseline algorithm is VoxelMorph [dalca2018unsupervised], and we also use its default settings for comparison. Initial affine registration is not performed for any of the experiments.

Experimental Results. Figures 2, 3, 4 show qualitative results for OASIS, IBSR18, and 3DIRCADB-01 datasets, respectively. Overall, our approach produces better matching results as compared to the baseline methods, demonstrated by the image difference plots. VoxelMorph tends to produce unwanted artifacts in its deformed images, which are not seen in our results. The deformation plot and the visualization of the determinant of the Jacobian show that our results have less deformations happening in the background, as expected. Also, our method achieves significantly smaller deformations throughout the image space and provides a better matching result to the target at the same time.

Regarding the inference time, ANTs SyN, which is tested on CPU since it does not have a GPU implementation, takes on an average 20 minutes, whereas VoxelMorph tested on GPU takes 121 milliseconds, while DDR-Net tested on GPU takes 425 milliseconds to register an image pair from the OASIS dataset. A limited ablation study conducted by us revealed that a single scale UNet architecture working on the full size velocity field integration for 2D input size of 128×128

for a single input image pair takes 26.46 MB of memory, whereas an architecture like DDR-Net for the same input and UNet architecture will take 21.16 MB of memory. The memory requirement was calculated considering the forward pass and parameters in the neural network. For 3D cases, our DDR-Net can take in more images in a batch, compared to a single scale UNet.

In this paper, we have proposed a diffeomorphic image registration model which estimates smoother deformations and provides a better image matching result. It leverages both the global context and local fine structures of the data effectively to enhance the registration result and handle large deformations as a result of such an architecture. Generally, our approach produced more regular deformation fields, which are significantly smoother than the baseline methods. The dice scores indicate that our approach is comparable to the existing methods even surpassing them in most cases. Moreover, our architecture shows that simple yet efficient changes in architectures can lead to better deep learning strategies. We believe that an optimal balance of GPU memory and accuracy is essential for registering image pairs in 3D in order to maximize the utilization of 3D information. Our work will push new avenues of research in considering memory efficient registration models in deep learning, which fully leverage the data.