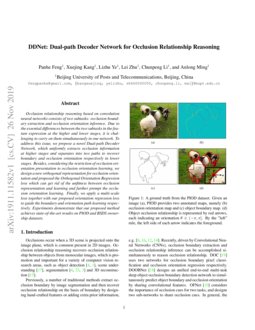 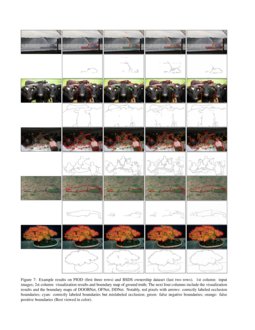 Occlusions occur when a 3D scene is projected onto the image plane, which is common present in 2D images. Occlusion relationship reasoning recovers occlusion relationship between objects from monocular images, which is promotion and important for a variety of computer vision research areas, such as object detection

first use the backbone network to extract different level features and use the entire decoder to extract shared information for two tasks, which improve the effect of occlusion reasoning but ignores the different effects of different level features on boundary and orientation. The occlusion information extracted from higher stages is consistent for both tasks, while lower stages tend to contain more specific spatial information that two tasks prefer respectively. Processing the information of higher stages and lower stages through the entire decoder probably restricts the learning flexibility and the representation of low-level features for the two tasks. The second issue is about the representation and learning of occlusion orientation in network. Previous methods

The main contributions of this paper are as follows:

Encoder-Decoder: In occlusion relationship reasoning, Encoder-Decoder can effectively utilize semantic information and occlusion cue of high-layer features to guide the network to recover the spatial location of occlusion from low-layer features. Deng et al. [2] use a bottom-up/top-down architecture to predict crisp boundaries. Based on HED [20], CED [22] implements edge enhancement by adding a decoder structure. CEDN [21] utilizes a fully convolutional encoder-decoder network to focus on detecting higher-level object contours. DOOBNet [18] adopts an encoder-decoder structure with skip connection to recover occlusion boundaries and occlusion relationship. The Encoder stage encoded different levels of feature and the Decoder is used to recover spatial dimensions and details.

Representation and prediction of occlusion orientation: To recover occlusion relationship between objects, DOC [19]

2π, and it is difficult for the network to regress the period value. DOOBNet [18] limits the predicted occlusion orientation ^θ to the ranges [−π,π) and regress the orientation value within the ranges. It can’t handle the values at both ends of the interval well.

as a base feature extraction model as in previous works

[18, 11, 10]. According to the size of the feature maps, this model is divided into five stages (see Fig. 2 Encoder) and has five sets corresponding side-layer features. Side-layer features in the different stages contain different information. In the dual-path decoder, we first use the occlusion-shared module (shown in Fig. 3) to uniformly extract occlusion information from the higher-stage features. In the lower-stage, we separate the decoder into the boundary path and the occlusion orientation path, which use spatial information to recover resolution for two tasks respectively. Two decoder paths in lower stages use similar structures, which combine the lower-stage features to recover the resolution gradually. The difference is that because of the occlusion orientation not sensitive to accurate spatial information, we use skip connection for the decoder path of the orientation path.

Furthermore, to make full use of multi-scale features and spatial information, we design a multi-scale supervision method for boundary path. Different from the method of supervised encoders that are widely used for edge detection [20, 22, 9, 5], we output and supervise the side-layer result of the decoder, which makes the lower-stage get the guide of occlusion information, thereby recovering more accurate boundary results. As shown in Fig. 2 (c), the Feature Fusion and Separation module combines the side-layer feature of the encoder stage and output a set of decoder side-layer features in boundary path. Finally, we use a 1x1 convolution layer to fuse multiple results.

Occlusion-shared module: The higher-stage features are aggregated by the Occlusion Shared Module and transported to the next stage. As shown in Fig. 3, we use the convolutional layer to extract the top-level features, and increase the feature resolution by upsampling. The intermediate feature maps of each stage in feature network all go through the Feature Boost Residual block. Then, the feature map of the up path and the intermediate feature map are fused by the concat operation and the convolution layer.

Feature Boost Residual Block: The feature maps in the encoder network go through the Feature Boost Residual Block. As shown in Fig. 2 (b), the first component of the block is a residual block, which can boost the feature map. Then the following is a 1x1 convolution layer, which is used to reduce the number of channels to half. This block can strengthen the recognition ability of each stage, benefited from the architecture of ResNet [7].

Feature Fusion and Separation Block: We use the Feature Fusion and Separation module to connect the various stages of the decoder. Firstly two 3x3 convolutions layers are used to fuse feature. Then two 1x1 convolutions are used to output features up and to the right, one for the next phase of the decoder and one for the side output. Both 1x1 convolutions reduce the number of channels accordingly. As shown in Fig. 2 (c), FFS-x indicates that the input/output corresponding to x is missing, we have several versions of FFS-b, FFS-c, FFS-d, FFS-bd respectively.

Based on our representation, we proposed a novel loss called Orthogonal Orientation Regression loss, which is defined as:

where the ^a and ^b represent prediction value of the network.

In CNN-based methods of occlusion relationship reasoning, the object boundary extraction and occlusion orientation inference are trained simultaneously. Thus the overall loss L is formulated as:

For an input image I, the ground truth is represented as a pair of object boundary map and occlusion orientation map {Y,O}. Where, Y=(yj,j=1,…,|I|),yj∈0,1 and O=(θj,j=1,…,|I|),θj∈(−π,π] and θj is invalid when yj=0. In boundary path, to make full use of multi-scale features and spatial information, each FFS block is connected with a specific side supervision. Besides that, we fuse the intermediate boundary predictions with a fusion layer as the final result. We formulate the loss of boundary part as:

where wside-s and wfuse are weights for the side loss and fusion loss respectively, ^Y=(yj,j=1,…,|I|),yj∈(0,1) represents the predicted boundary map .

The function Γ(^Y,Y) is computed at boundary pixel with respect to its boundary annotation. Because the distribution of boundary/non-boundary pixels is heavily biased, we employ a class-balanced cross-entropy loss as Γ(^Y,Y). we define Y− and Y+ denoting the non-boundary and boundary ground truth label sets in a batch of images, respectively. We define Γ(^Y,Y) as:

PIOD dataset: It contains 9,175 images for training and 925 images for testing. Each image is annotated with ground truth object instance boundary map and its corresponding orientation map.

Our network is implemented in Pytorch using the ResNet50 pretrained on the ImageNet as the backbone. AdamW optimizer is adopted to train our network. The initial learning rate is 3e-6. The training image are randomly crop into 320x320 and form the training batch with the size of 8. For the PIOD dataset, we set 0.5, 1.1, 1.1, 2.1, 1.7 for the hyper-parameters

wside-2-5, wside-1, worientation, wfuse and λ respectively and train for 40k iterations. For the BSDS ownership dataset, we set λ as 1.1 and train the network for 20k iterators. Other hyper-parameters are the same as them for PIOD.

For the evaluation metrics

[18, 10], we use the Boundary Map Recall (BPR) and Oritation Maps Recall (OPR) with three-level measure: the Fixed Contour Threshold (ODS), the Best Threshold of Image (OIS), the Average Precision (AP). Note that, the Non-Maximum Suppression are generated on the final boundary map during evaluation and the OPR is only calculated at the correctly detected boundary pixels.

4.2 Comparison with Other Works

Performance on PIOD: The ”Precision-Recall Curve” of the boundary is shown in Fig. 5 (a), we can see that even though training alone, our method can outperforms other methods (High PR Curve) profited by the multi-scale supervision, which provides more spatial information to guide the boundary extraction. When training the occlusion orientation regression alone, our model also outperforms all other methods (High PR Curve for occlusion boundary), which shows that our orthogonal orientation regression can predict the occlusion boundary well.

Performance on BSDS ownership: The BSDS ownership is difficult to train due to the small number of the training samples. Nonetheless, our method can still get superior performance than other models both in BPR and OOR as shown in Fig. 6. Specifically, as shown in Table 2, the performance of our model are 5% higher than the state-of-the-art model benefited from our OOR loss, which can fit the occlusion orientation reasonably. Note that, this loss can also promote precision of the boundary map and make our BPR also higher than other models.

Finally, we visualize the boundary maps and occlusion relationship maps of our models and others including the DOOBNet[18] and OFNet[10]. Their boundary maps and occlusion relationship maps are shown in Fig. 7. Obviously, our method extracts the more complete and clearer boundary on multiple images, especially the first and fourth images. In complex and indistinguishable scenes, such as the second and third images, we are still ahead of the other two methods, because our network has more powerful learning and generalization skills. In the last image, although having similar boundary precision, our model can discern the occlusion orientation legs. In summary, our method can outperforms others by a large margin both in boundary and occlusion orientation, which proves the effectiveness of our network.

In this section, we conduct experiments on PIOD dataset to study the impact of parameters and verify each component in our network.

Comparison for number of shared stages: We compared sharing top-1, top-2, top-3, and top-4 stages at high stages. As shown in Fig. 2, as the number of layers included in the occlusion sharing module changes, the length of the boundary path and the occlusion orientation path change accordingly. As shown in Table 3, The best results appear when sharing the top-2 stages, which is also the structure we use. Then, when the sharing extends to the low stage, the results begin to deteriorate. This proves that two tasks should share occlusion information that higher stages contains, while they should be separated in lower stages to recover spatial information separately.

This paper proposes the DDNet for occlusion relationship reasoning. By using the dual-path decoder structure to decodes the high-stage features together and the low-stage features for occlusion boundary extraction and occlusion orientation inference. We have multi-scale supervision structure for the boundary path, which provides more and stronger spatial information for boundary extraction. For better predicting the occlusion orientation in the network, we use the orthogonal orientation vector to represent the occlusion relationship and propose the corresponding OOR loss.