AUTOMAP is a promising generalized reconstruction approach, however, it is not scalable and hence the practicality is limited. We present dAUTOMAP, a novel way for decomposing the domain transformation of AUTOMAP, making the model scale linearly. We show dAUTOMAP outperforms AUTOMAP with significantly fewer parameters. 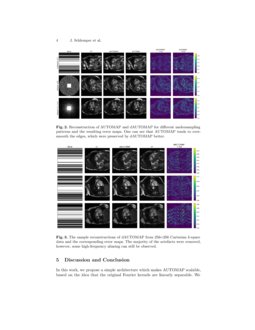 ScarletNAS: Bridging the Gap Between Scalability and Fairness in Neural Architecture Search

Recently, automated transform by manifold approximation (AUTOMAP) [3] has been proposed as an innovative approach to directly learn the transformation from source signal domain to target image domain. While the applicability of AUTOMAP to a range of tasks has been demonstrated, its practicality remains limited as the required number of parameters scales quadratically with the input size. We present a novel way for decomposing the domain transformation, which makes the model scale linearly with the input size. We term the resulting network dAUTOMAP (decomposed - AUTOMAP). We show that, remarkably, the proposed approach outperforms AUTOMAP for the provided dataset with significantly fewer parameters.††Presented at ISMRM 27th Annual Meeting & Exhibition (Abstract #665)

be a complex-valued image. The two-dimensional Discrete Fourier Transform (DFT) is given by:

This is commonly written as a matrix product: vec(y)=Evec(x)

, where we take row-major vectorization and

E=e−j2π(nkN+mlM), with p=kM+l, q=nM+m. As the matrix E is the Kronecker product of two one-dimensional DFT’s, we have:

where (FN)kn=e−j2πnkN, (FM)lm=e−j2πmlM. Observe that FNx can be computed using a convolution layer with N kernels of size (N,1)

with no padding where the output tensor has size

(Nbatch,N,1,M). Motivated by this, we propose a decomposed transform layer (DT layer): a convolution layer with the above kernel size, which is learnable. In the simplest case, the layer can be reduced to the (inverse) Fourier transform or identity. A 2D DFT can be performed by applying the DT layer twice, where the intermediate tensor is first reshaped into (Nbatch,1,N,M) and then conjugate-transposed. Note that the complex nature of the operation is preserved by R2, which doubles the number of output channels (i.e. 2N). Therefore, the convolution kernel of the DT layer has the shape: (Ncout,Ncin,kernelx,kernely)=(2N,2,N,1). For the second DT layer, N and M are swapped.

The proposed dAUTOMAP, shown in Fig. 1

, replaces the fully-connected layers in AUTOMAP by DT layers. We used ReLU as the choice of non-linearity.

We evaluated the proposed method on a simulation-based study using short-axis (SA) cardiac cine magnitude images from the UK Biobank Study[1] (>1M SA slices). To compare with AUTOMAP, the data were subsampled to central 128×128 k-space grid points. Both methods were evaluated on the reconstruction tasks from three undersampling patterns: (1) Cartesian with Acceleration Factor AF=2, (2) Poisson with AF=4, (3) Variable density Poisson (VDP) with AF=7[2]. For dAUTOMAP, we also experimented with the images having 256×256 k-space grid points, with 2× Cartesian undersampling.

Both networks were initialised randomly and trained for 1000 epochs. We used RMSProp with

As shown in Table 1, the proposed approach outperformed AUTOMAP (Wilcoxon, p≪0.01). Fig. 2 shows sample reconstructions. We notice that AUTOMAP tends to over-smooth the image, whereas dAUTOMAP preserves the fine-structure better, even though the residual artefact is more prominent. The result of dAUTOMAP for 256×256 k-space data is shown in Fig. 3, demonstrating that the method successfully learnt a transform which simultaneously dealiases the image. The execution speeds were comparable (Table 2. The parameters of the proposed approach required only 1.5MB of memory for 128×128 k-space data, compared to 3.1GB required for AUTOMAP (these numbers increase to 3.1MB vs 56GB for 256×256 k-space data).

In this work, we propose a simple architecture which makes AUTOMAP scalable, based on the idea that the original Fourier kernels are linearly separable. We experimentally found that such an approach yields superior performance in practice, which is attributed to having significantly fewer parameters, making it easier to train and less prone to overfitting. In future, we plan to investigate the performance of non-Cartesian sampling strategies, which would require regridding, or extensions to 3D data. Finally, the code is available on http://github.com/js3611/dAUTOMAP.